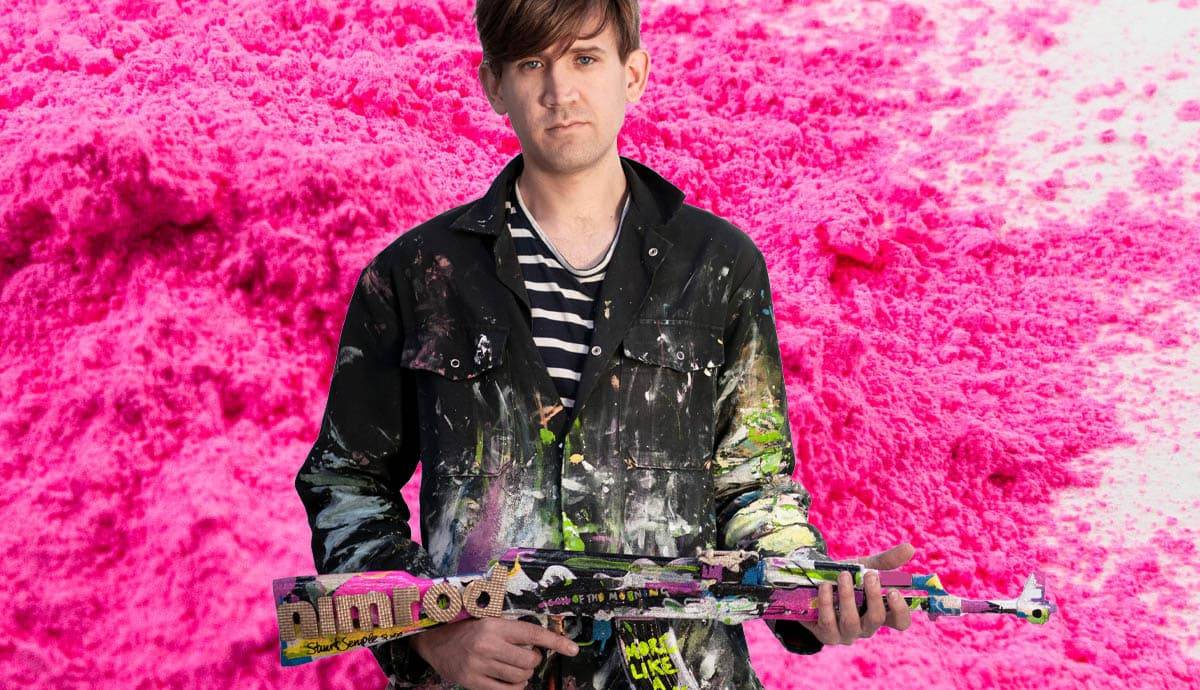 British artist Stuart Semple is no stranger to controversy. Known for his dry, witty commentaries on contemporary culture, he works across various media including happenings, objects, consumerist goods and performance. In 2016 Semple stirred up a storm with his lurid PINK pigment, made in retaliation against British installation artist and sculptor Anish Kapoor’s exclusive jet-black ‘Vantablack’. Read on to find out more about Semple’s infamous PINK pigment, dubbed the world’s “pinkest pink”, and its controversial backstory.

On the 4th of November 2016, Stuart Semple posted a video on Facebook announcing his release of a new pigment titled ‘PINK.’ In the video, Semple explained how Anish Kapoor had famously declared exclusive rights on his Vantablack pigment, then the world’s blackest black available on the market. Semple further explained that he was one of many contemporary artists angered by the pretentious exclusivity of Kapoor’s product, and the hashtag #sharetheblack had been set up as a reactionary group.

In Semple’s Facebook video he told viewers his alternative PINK pigment, which he called the “pinkest pink,” was made as a direct reaction against Kapoor. To really wind-up Kapoor, Semple made the product available for sale on his website to anyone except for Anish Kapoor. He stated, “Purchasers of PINK will be required to make a legal declaration during the online checkout process though, confirming that: “you are not Anish Kapoor, you are in no way affiliated to Anish Kapoor, you are not purchasing this item on behalf of Anish Kapoor or an associate of Anish Kapoor.”

Semple’s PINK is an intense, ultra-fluorescent shade so vivid it is difficult to fully understand its potency on a computer screen – it has to be seen to be believed. It’s likely Semple chose such an intense color as the antithesis of Kapoor’s black – where black is a void of empty darkness, pink is filled with life, optimism, camp and fun. Semple said, “Pink is a really powerful color and this particular pink is extremely vibrant, so it felt like the logical choice to make the point I was hoping to make.” Semple’s shade has even been dubbed by some as the “orgasm shade” for its incredible potency and the sexual connotations it conjures up.

Semple intended his PINK to be a one-time stunt where he “might sell one or two” pots of pigment. He had no idea how much attention he would attract, and how much demand there would be for the pinkest pink, with orders reaching the thousands. Semple even had to enlist his family to help grind the ingredients and package up orders. Some artists who bought the pigment were even making artworks with it, posting their art online and sharing it at #sharetheblack.

Eventually word got back to Anish Kapoor. He responded with one simple image on Instagram, featuring a raised middle finger dipped in Semple’s pigment that he had managed to get hold of, accompanied by the caption “Up yours #pink.” Kapoor’s reaction sparked further uproar from artists in support of Semple. Some even encouraged Semple to create his own black pigment in retaliation.

Since Kapoor’s retaliatory Instagram, Semple has been busy creating a series of pigments that remain available to everyone except Kapoor. In 2017, he came up with Better Black, followed by Black 2.0 and Black 3.0, which he claims can beat Vantablack for the deep intensity and high pigmentation of their blackness. Semple has also developed a series of further pigments including a substance called Diamond Dust, which Semple calls “the glitteriest glitter”, and White 2.0, “the whitest white paint” with an unbeatable brightness. He has even gone on to make his PINK “now even pinker”, branding it, “twice as pink.” Semple’s ongoing, madcap obsession with taking color to the extreme has earned him a widespread online following, and the heroic title as the “Robin Hood of the Rainbow.”