HomeAnswersWho Is Dionysus in Greek Mythology?

Who Is Dionysus in Greek Mythology? 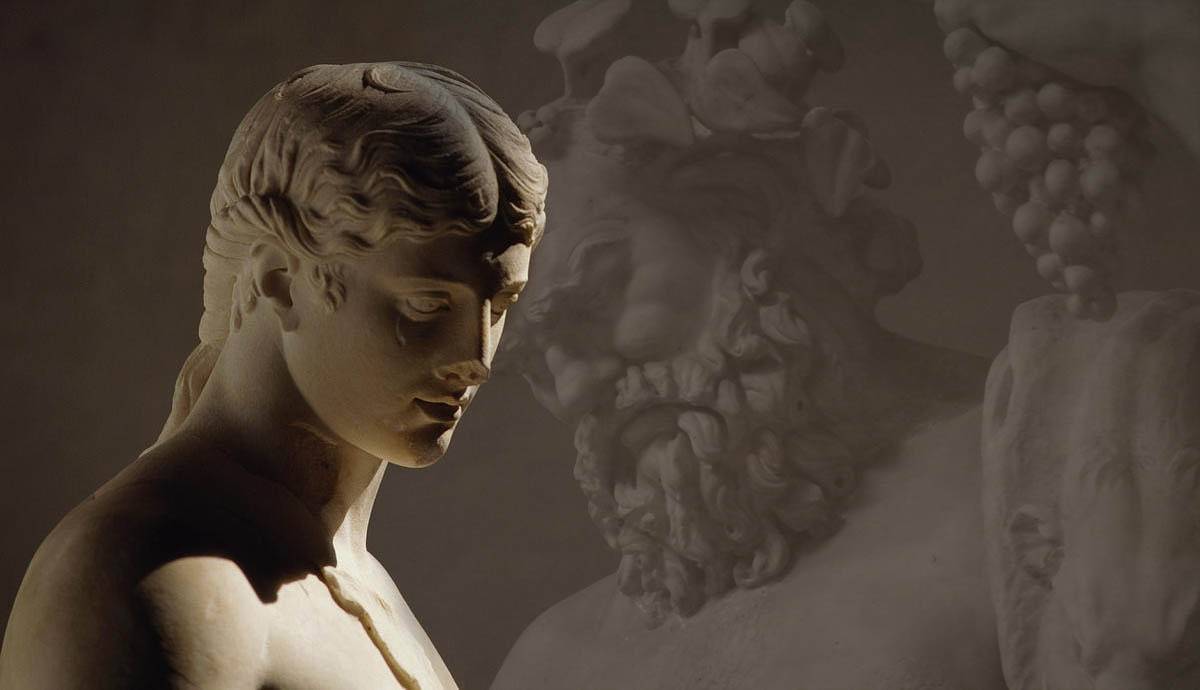 Dionysus is the Greek god of wine, ecstasy, fertility, theatre and festivity. A real wild child with a dangerous streak, he embodied the free-spirited and unrestrained aspects of Greek society. One of his greatest epithets was Eleutherios, or “the “liberator.” Whenever a great party took place, Greeks believed he was there in the middle, making it all happen. Son of Greek god Zeus and the mortal Semele, Dionysus was youthful, beautiful and effeminate, and he had a real way with women. He also had a dark side, and the ability to drive people to complete madness. Dionysus appeared in Greek art more than any other god, often riding on animals or surrounded by adoring fans, while swilling a glass that was permanently full of wine. Read on to find out more about one of Greek mythology’s most popular gods.

Dionysus is the Son of Zeus

Greeks wrote many different variations on Dionysus’s story and parentage. But in the most popular version of his life, he was the son of the almighty Zeus, and Semele, one of Zeus’s many mortal lovers in Thebes. When Zeus’s jealous wife Hera found out that Semele was pregnant, she demanded Semele to summon Zeus in his true divine glory, knowing it would be too much for any mortal to witness. When Zeus appeared in his thunderous god form, Semele was so overwhelmed she instantly burst into flames. But what about her unborn child? Zeus swiftly swept in and saved the infant, sewing it into his huge, muscular thigh for safe keeping. There the baby remained until he had reached maturity. This meant Dionysus was born twice, once from his dying mother, and later from his father’s thigh.

He Had a Turbulent Childhood

After being born, Dionysus went to live with his aunt Ino (his mother’s sister), and his uncle Athamas. Meanwhile, Zeus’s wife Hera was still raging that he existed at all, and she set about making his life a misery. She arranged for the Titans to tear Dionysus to shreds. But Dionysus’s crafty grandmother Rhea sewed the pieces back together and brought him back to life. She then spirited him away to the remote and mysterious Mount Nysa, where he lived out the rest of his adolescence surrounded by mountain nymphs.

As a young man Dionysus fell in love with a satyr named Ampelus. When Ampelus died in a bull-riding accident, his body changed into a grape vine, and it was from this vine that Dionysus first made wine. Meanwhile, Hera had found out that Dionysus was still alive, and she began hounding him again, driving him to the brink of insanity. This forced Dionysus to live a nomadic life on the run. He used this as an opportunity to share his wine-making skills with the world. As he travelled through Egypt, Syria, and Mesopotamia, he took part in several misadventures, good and bad. In one of his more popular myths, Dionysus grants King Midas the ‘golden touch,’ which allows him to turn everything into gold.

Dionysus discovered the beautiful maiden Ariadne on the Aegean Island of Naxos, where her former lover Theseus had abandoned her. Dionysus immediately fell in love and they swiftly got married. They then went on to have several children together. The names of their children were Oenopion, Thoas, Staphylos and Peparethus.

He Returned to Mount Olympus

Eventually Dionysus’s wanderings across earth came to an end, and he ascended to Mount Olympus, where he became one of the twelve great Olympians. Even Hera, his great nemesis, finally accepted Dionysus as a god. Once settled there, Dionysus used his powers to summon his mother back from the underworld to live with him in Mount Olympus, under the new name of Thyone.

Romans changed Dionysus into the character of Bacchus, who was also the god of wine and merriment. Like the Greeks, Romans associated Bacchus with wild parties and he is often depicted in a state of intoxication while holding a glass of wine. Bacchus even inspired the Roman cult of Bacchanalia, a series of raucous and rebellious festivals filled with music, wine and hedonistic indulgence. It was from this source that today’s word ‘Bacchanalian’ emerged, describing a drunken party or feast.