HomeArtistsThe Mama of Dada: Who Was Elsa von Freytag-Loringhoven?

The Mama of Dada: Who Was Elsa von Freytag-Loringhoven?

From ready-mades and performances to poetry, the Dada artist Elsa von Freytag-Loringhoven did it all. 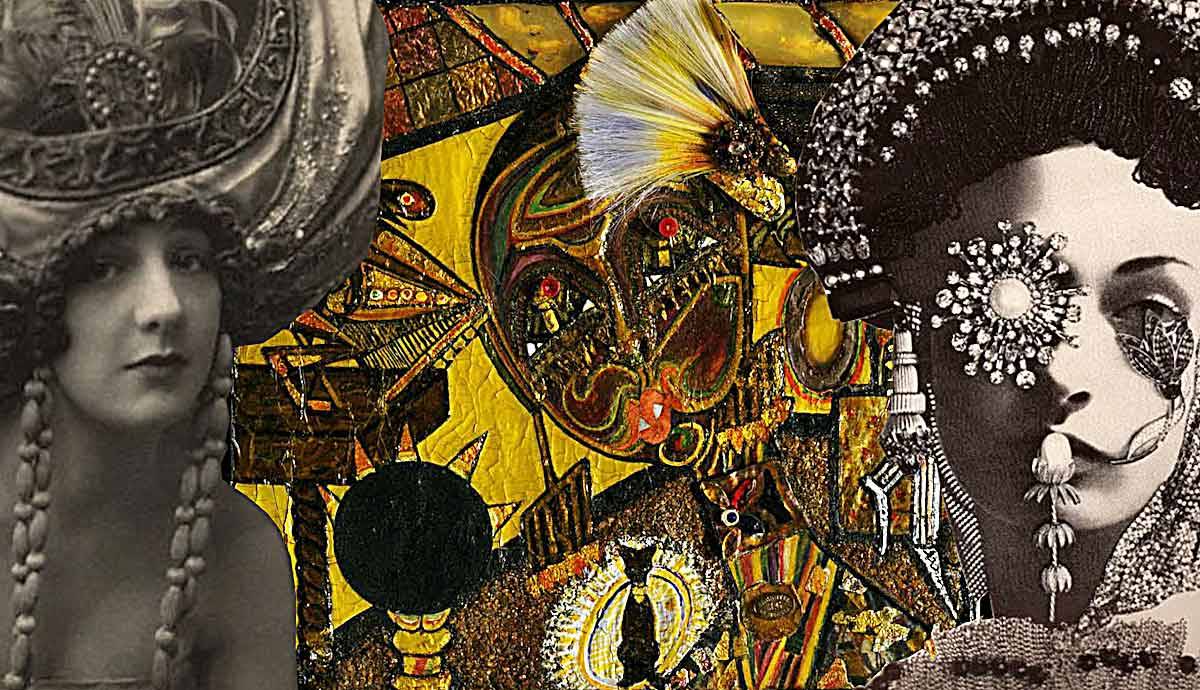 When people think of Dada they usually think of Marcel Duchamp and not of Elsa von Freytag-Loringhoven. Despite the fact that she is a lesser-known Dada artist, her impressive body of work makes her an exceptional figure of the movement. Like Marcel Duchamp, Elsa von Freytag-Loringhoven made art out of found objects. Her artistic achievements, though, are often overshadowed by her eccentric personality. Here is an introduction to an often-overlooked member of the Dada movement.

Elsa von Freytag-Loringhoven was born in 1874 in Swinemünde. She described her patriarchal father as a cruel person with a violent temper but also as someone who was generous with a big heart. Her elegant mother was a descendant of an impoverished aristocratic Polish family. Elsa von Freytag-Loringhoven’s use of ordinary found objects can be partly explained by her mother’s unique and creative nature. According to the artist, her mother would combine fine materials with cheap trash and use her father’s high-quality suits to create handkerchief holders. Her mother had mental health issues which the artist felt her father was responsible for. When her mother died of cancer and her father remarried, the relationship between them became increasingly strained.

After her father remarried, the 18-year-old artist went to stay with her mother’s half-sister in Berlin. There, she applied for a job that she found in a newspaper advertisement. A theater was looking for girls with good figures. During the audition, she had to strip naked for the first time which she described as a miraculous experience. While Elsa was traveling around and performing for the company, she enjoyed the sexual freedoms this open environment offered.

Elsa returned to her aunt after she found out that she had syphilis. The artist and her aunt had a fight about her relationships with men, which resulted in her getting kicked out. She then stayed with lovers who provided her with food. What followed was a series of platonic and romantic relationships with artists like Ernst Hardt and Richard Schmitz. Her own interest in creating art grew. She moved to an artist colony near Munich and hired a pretentious private tutor who, according to her, was of no use at all.

After her divorce, the artist settled in Greenwich Village. She worked as a model for several artists and art classes. Elsa was even arrested for wearing a man’s suit while there. The New York Times wrote an article about it titled She Wore Men’s Clothes. Through her radical style, challenging gender norms, and disregard for Victorian values, Elsa became a pioneer of the Dada movement in the US.

Her experimentation with found everyday objects started in 1913, which was two years before New York Dada and four years before Marcel Duchamp created the Fountain. When Elsa von Freytag-Loringhoven found an iron ring on the street, she made it into her first found object artwork. She thought of it as a female symbol representing Venus and named it the Enduring Ornament.

In order to escape World War I, many European artists came to New York. Creatives like Marcel Duchamp, Francis Picabia, Gabrielle Buffet-Picabia, Albert Gleizes, Juliette Roche, Henri-Pierre Roché, Jean Crotti, Mina Loy, and Arthur Cravan came to the city. The members of the New York Dada group met at the home of Walter and Louise Arensberg. He was a poet and affluent collector and his home served as the Arensberg salon on Sixty-seventh Street off Central Park. The walls inside their home were filled with contemporary artworks.

Duchamp and Elsa von Freytag-Loringhoven became friends, despite the fact that she was sexually attracted to him. Duchamp, however, did not share her feelings. For a period of time, von Freytag-Loringhoven lived in the Lincoln Arcade Building. Many artists rented studios there. The artist’s apartment was messy and filled with several breeds of animals, especially cats and dogs. Duchamp also lived in the Lincoln Arcade Building from 1915 until 1916.

Duchamp even became an inspiration for the artist. Elsa often used her body as a tool in her artworks, so she rubbed a newspaper clipping about Duchamp’s painting Nude Descending a Staircase all over her naked body and ended the act by sharing a poem about him with the following words Marcel, Marcel, I love you like Hell, Marcel.

Elsa von Freytag-Loringhoven used an array of materials in her artworks. She also created poetry, assemblages, and performance pieces. Her work titled God is probably the artist’s best-known piece. It was originally thought that the work was made by Morton Livingston Schamberg. However, we now know that he only photographed it and Elsa von Freytag-Loringhoven came up with it. God consists of a cast iron plumbing trap mounted onto a miter box. It is an exemplary piece of the Dada movement that’s similar to Marcel Duchamp’s works. The title God and the use of a plumbing device illustrate some of the aspects that Dadaists are famous for like irony and humor. These types of pieces also challenged artistic as well as societal conventions of the time.

One of Elsa’s assemblages directly references Marcel Duchamp. The piece called Portrait of Marcel Duchamp consists of a champagne glass filled with bird feathers, wire coils, springs, and small discs. The New York art critic Alan Moore praised von Freytag-Loringhoven’s use of non-traditional media and said that her best-known sculptures look like cocktails and the underside of toilets.

Her Dada Portrait of Berenice Abbott also uses a wide range of materials like Gouache, metallic paint, metal foil, celluloid, fiberglass, glass beads, metal objects, cut-and-pasted painted paper, gesso, and cloth. The work is a portrait of the American photographer Berenice Abbott who was among young female artists influenced by Elsa von Freytag-Loringhoven. Abbott even described the Baroness as a combination of Jesus Christ and Shakespeare.

In addition to her visual art, von Freytag-Loringhoven also wrote a lot of poetry. Her work discussed taboo subjects like birth control, the lack of female pleasure, orgasms, oral and anal sex, impotence, and ejaculation. In her poetry, she did not shy away from combining sex and religion by, for example, comparing the genitals of nuns to empty cars. In 2011, 84 years after her death, the first anthology of von Freytag-Loringhoven’s poetry was published under the title Body Sweats: The Uncensored Writings of Elsa von Freytag-Loringhoven. Only 31 of the 150 poems featured in the book were published during the artist’s lifetime since not many editors wanted to publish the controversial works of the already infamous artist.

The Peculiar Case of Duchamp’s Fountain

In 2002, the well-known fact that the famous Fountain was made by Marcel Duchamp was questioned by the literary historian and biographer Irene Gammel. She claimed that Elsa von Freytag-Loringhoven created the work instead. Duchamp wrote a letter to his sister in which he explained that one of his female friends who adopted the pseudonym Richard Mutt sent in a porcelain urinal as a sculpture. While there is circumstantial evidence that Elsa was indeed the female friend Duchamp talked about in his letter, there is no concrete evidence that she made the piece. It is safe to say that Elsa von Freytag-Loringhoven was not afraid of causing controversy, so we can be sure that she would have claimed the artwork as her own during her lifetime if it was truly hers.

Let’s finish off with 10 interesting facts about Elsa:

Hannah Höch: The Life and Work of the German Dada Artist

What Was So Great About Marcel Duchamp’s Fountain?