Pauline Boty was a firestarter of British Pop Art. A founding member, she made distinctive collage paintings celebrating female virility. 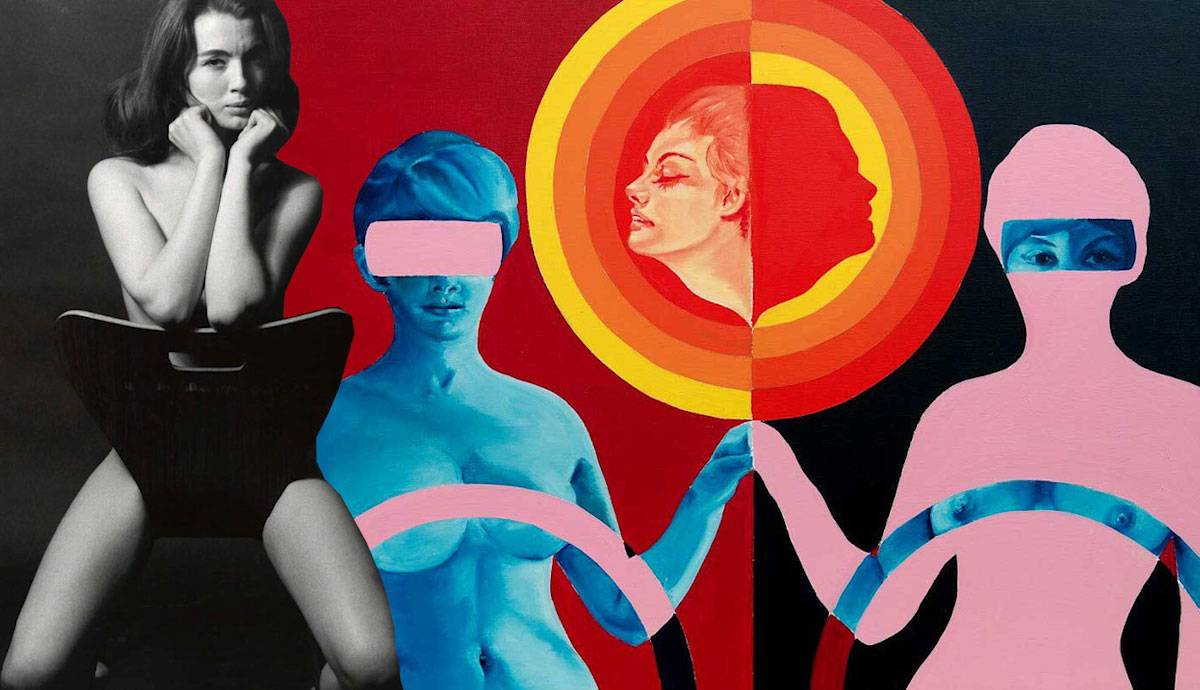 Pauline Boty’s paintings and experiences are a beacon. She was inclined to play a role with men, as it fostered embarrassment if a woman expressed intelligence. Celebrated as a sex symbol before a talented artist, she and other female Pop Artists were missing from retrospectives until the late nineties. Provocative and unashamedly female, her works show an artist painting the true Pop experience with joy. A devotee of Marilyn Monroe, she identified with fans and saw film stars as 20th-century gods and goddesses.

A Leader in Female Pop Art

Despite studying stained glass design at The Royal College of Art, Pauline Boty went on to create collage paintings that lent her a, what should have been, significant place in the British Pop Art movement. From 1962 Boty added collage to paint in works such as Red Manoeuvre. She then developed a distinctive style where elements are skilfully painted to look like collages, as in Epitaph to Something’s Gotta Give. Combining pop culture imagery with surrealist elements, her works depict the fantasy obsession with pop culture heroes, often cut through with a satirical and political edge.

The iconography and titles that Boty used reveal her early interest in pop culture, such as the film stills of Marilyn Monroe in Epitaph to Something’s Gotta Give. The title refers to Marilyn’s last unfinished film and the film stills are taken from a playful nude swimming scene. In this painting, geometric shapes and saturation create a surreal world while pointing to the meaning of the work. The out-of-focus pictorial space echoes the dreamlike myth of stardom. The circles relate to the atmosphere of 1930s musicals and mimic a camera lens. The parallel rectangles reference the rays of a film projector. These were key emblematic images of the Pop Art era, seen in works by Evelyn Axell and Jasper Johns.

There is a ghost of self-portraiture from Boty throughout her oeuvre but is especially prominent in her paintings of Marilyn Monroe. Blonde and captivating, Boty was no stranger to the detrimental impact of her beauty on her perception as a serious artist. In The Only Blonde in the World, 1963, Boty captures the glimpse of the photographer’s lucky shot of Marilyn hurrying through a green doorway. The multiple blue lines along the leg, suggesting movement, is a technique taken from Futurism. Soft and downy Marilyn appears out of reach, simultaneously appearing just close enough for a desperate viewer to touch.

The green painterly background that saturates the canvas, much like the red in Epitaph to Something’s Gotta Give, echoes the psychedelic dreamland which projects the hyper desire of a sixties fangirl. The gold and blue pattern of the frame within a frame somehow appears in front of the flat green field, providing a subtle three-dimensional aspect. More geometric hoops confuse the perspective, offering an illusory vision, like a Hollywood dream.

Much of Pauline Boty’s work was a pictorial shrine to media stars of the 60s. However, discounting Marilyn Monroe, she shone a light on heroes from the alternative scene, such as Jean-Paul Belmondo. Belmondo, star of new wave French classic Breathless (1960) is adorned with a large orgasmic flower and hearts, much like holy relics are covered with colorful adornments.

Belmondo was a perfect candidate for a sixties girl’s crush, the embodiment of rebellion, the new James Dean, but also a symbol of a sophisticated woman’s desire, one with total confidence in her passion and needs. She was the mirror of Pop female royalty like Brigitte Bardot, a masculine and potent extension of the kind of myth that she engendered, a much-needed male pin-up that validated the female gaze. Boty described seeing Belmondo’s New Wave film A Bout de Souffle as “indescribable joy and lechery and slurp, slurp he’s lovely, just lovely.” In With Love to Jean-Paul Belmondo, he looks at us over his shoulder, painted in monochrome, through the black and white press photographs of the mainstream media.

Boty paints here the passion of the female fan, orange being Boty’s chosen color for orgasm, surrounding him with slightly manic red brush strokes. She also adds blurry, billowing red roses of desire to the painting. Not just a portrait of Belmondo, this work focuses on the emotions his fame generated among female fans. The pop hearts and the somewhat comical rose speak to an undeniable indulgence in media pleasures.

While studying at the Royal College of Art, Boty discussed with her boyfriend of the time Jim Donovan her depiction of the female orgasm. These being lovely, lovely orange shapes stretching outward with a noisy pop, pop, pop. The stretching outward of the orgasm Boty described is reflected in Jean Paul’s billowing rosy headwear and in the streams of balloons flashing across the sky in Red Manoeuvre.

Pauline Boty as the Performer

Boty often posed with her paintings, in a way becoming them and proudly illustrating herself as the creator. She playfully mirrored herself as Marilyn Monroe, Monica Vitti, and Brigitte Bardot. Male photographers caught her performative character in these portraits, nude or in appropriate costume. In front of With Love to Jean-Paul Belmondo she suggestively echoes Bardot in the opening scene of the movie called And God Created Woman as well as Botticelli’s The Birth of Venus.

Boty re-wrote herself in and out of the male gaze. Pop Culture by men consisted of legs, lips, and provocative poses. Boty mimicked the pin-up role whilst positioning herself as the work’s producer and creator. As well as rejoicing in the sexual freedom of the pill generation, her portraits speak of high culture as well as pop culture. Women are always nude, so Boty subverted that old male gaze to her own descriptor.

In Pop Goes the Easel, Ken Russell’s documentary which placed her at the center of British pop art, Boty’s performative persona is reiterated as she impersonates Shirley Temple. She wasn’t only painting Pop, depicting the culture as an artist, she was Pop. Living her life as a glorious hybrid of artist/actress/radio presenter and model, featured in Vogue in 1963 and acting in various plays and TV roles, she was in the front seat of pop culture.

Boty painted Pop subjects joyfully, with a much-needed spin on female sexuality and pleasure. She also tackled current affairs and political subjects in her work. Her painting Scandal ‘63 meshes these two streams of content. In 1963 Boty was commissioned to paint The Profumo Affair from her perspective. The Profumo Affair was a national (and international) scandal following nineteen-year-old model Christine Keeler’s relationships with John Profumo, the Conservative Secretary of State for War, and Yevgeny Ivanov, a Soviet naval attaché officer. At the height of the Cold War, this was deemed a serious risk to national security.

The affair also revealed the hypocrisy of the Conservative government. Profumo, a middle-aged married Conservative minister, would socialize in a strange sordid upper-class world of gangsters, musicians, and sex workers. Keeler was painted as a beaten down victim by the press, lured by powerful men into a sordid life of sex and violence.

Boty paints Keeler as a heroine juxtaposed with four male protagonists of the affair. The original photograph that Boty was inspired by, taken by Lewis Morley, showed Keeler naked and straddling a Jacobsen chair, as a pin-up. Her painting alters the original pose, Keeler is now with her arm across her chest, revealing more of her cleavage. The original shot shows Keeler looking innocent and not sure of herself, however, Boty’s painting shows her as defiant and confident.

A familiar dream-like patchwork of imagery floats in the red until you look closer and see a bed to Keeler’s right, emblazoned with a provocative ‘69’ rosette. An ecstatic face of a woman is embedded to her left, which points to Boty’s joy at portraying the female orgasm. A mix of patterns points to the sexually free and hot fashion of the sixties, but an almost intestinal structure could be a metaphor for Keeler’s innards as laid out by the press.

Monochrome portraits, echoing press photographs, illustrate the male protagonists. Rudolph Fenton and Lucky Gordon were two Black men who were key witnesses and imprisoned during the affair. They are placed with equal prominence next to the more famous, and white, Stephen Ward and John Profumo. Boty switches up the dynamics of race and gender laws in this painting, in a society where Black people and women were pawns and playthings.

Much of the literature on Boty discusses, rightfully, the side-lining of her work by male contemporaries and critics, often due to her glamorous looks, that failed to temper until the nineties. Still, she is not recognized as a “big name” in British Pop Art. Her work is inexplicably linked to her experience as an expressive, sexually free woman of her time. Her paintings joyfully communicate the intensity of the dream sensation achieved when indulging in media fantasy. She perfectly married this with the mystique of female pleasure. Boty passionately advocated for the shared experience that popular culture provided, combining high and low culture in her works. It is speculated that had she not died so tragically young in 1966, she would have forayed into film, most likely starring in and directing her own pictures. 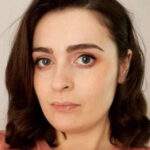 By Cat AskewBA Fine Art and Art HistoryCat is a British multi-disciplinary artist from the south coast of England. Her work often has a satirical and feminist twist which is tied to her academic interests. She holds a BA in Fine Art and Art History from the University of Plymouth. Cat is interested in Dada, Pop Art and the historiography of female artists, as well as self-organised exhibitions and guerilla art.