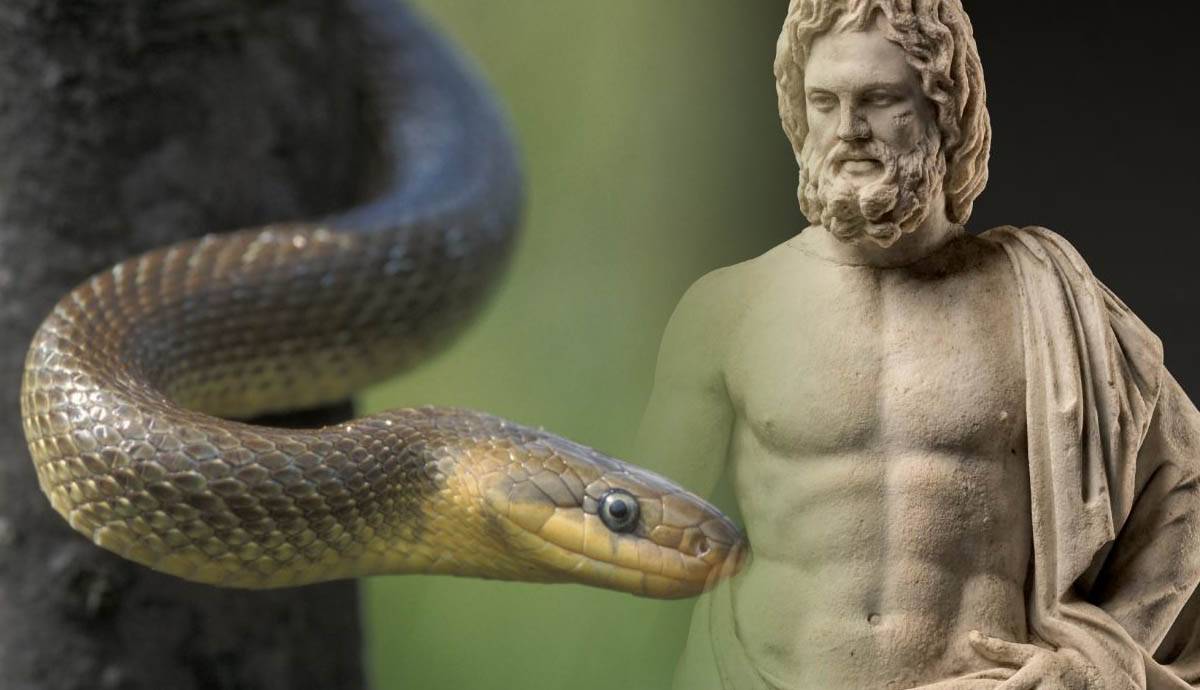 Asclepius is one of the lesser-known gods of Greek mythology, but he still had a vitally important role to play. As the Greek god of medicine, his extraordinary gift for healing meant he could save the lives of many, and even bring the dead back to life. He is often seen holding a staff with a snake curling around it – this ‘snake and staff’ was a symbol for his incredible healing powers. Through the centuries, however, it became a wider emblem for the rejuvenating potential of medicine. Today, it is even the logo for the World Health Organization (WHO). But why did Greeks associate Asclepius with snakes in the first place? There are several theories, which we will look into in more detail.

Given that so many of us are now scared of snakes, the Greek fascination with these creatures might seem a little strange to us today. But is worth remembering that for ancient Greeks snakes were divine, mysterious and highly knowledgeable beasts, with innate healing abilities. And Asclepius was keen to learn as much as he could from them.

In one legend, Asclepius killed a snake. He then watched on as another snake came along and passed herbs to the dead snake to revive it. Through watching this interaction carefully, he was able to learn the hidden healing properties of nature. Asclepius then used the very same technique to bring a man back from the dead. In another, similar story, he healed a snake from encroaching death. To say thanks, the snake quietly whispered his knowledge on the healing arts into Asclepius’s ear.

The Cult of Asclepius and Snakes

Ancient Greeks established the Cult of Asclepius, inspired by the stories of this venerated healer. They set up healing temples called Asclepeions. There, healers would perform a series of rituals in order to bring people back to full health. Live, non-venomous snakes roamed freely around the healing temple, bringing their mysterious and enigmatic presence to the surroundings. This particular breed of harmless snake still exists today, and is known as the Aesculapian Snake.

He Could Heal a Deadly Snakebite

In other stories, Asclepius had become so skilled in healing any kind of ailment or illness, that he could even revive those who had suffered from a deadly snakebite. When he fought in the Trojan War, he was able to put his amazing healing abilities to great use. As the story goes, Asclepius was able to heal the famous war hero Philoctetes from a deadly snake bite, allowing him to continue fighting for the Trojan army.

More recently, the Asclepius Snakebite Foundation works closely today with communities to prevent and cure victims of snakebites, and they have based their philosophy around the great healer of ancient Greece. Interestingly, the foundation point out that the cure for a snakebite (and also many other ailments) often comes from snake venom, proving how complex this substance really is!

When he was still learning his trade as a healer, Asclepius received help from a range of sources, including important gods and goddesses. One of the most potent and useful came from Athena, the goddess of war – she gifted Asclepius the blood of the Gorgon Medusa, which was a highly volatile substance. So much so, the blood from the left side of Medusa could cause death, while the blood from the right side could revive the dead. Athena entrusted Asclepius with this potentially hazardous venom, and he mostly used it for good, bringing many mortals back to life. Why is this story relevant? Well, remember Medusa had venomous snakes for hair! Her inclusion in Asclepius’s story further demonstrates the vital role snakes played in his life as a healer, as well as the complex nature of snake venom as both a giver and taker of life.