Visionary poet, painter, and printmaker William Blake conjured up mystical worlds full of drama and danger, and is now considered one of the most legendary figures of the Romantic era. 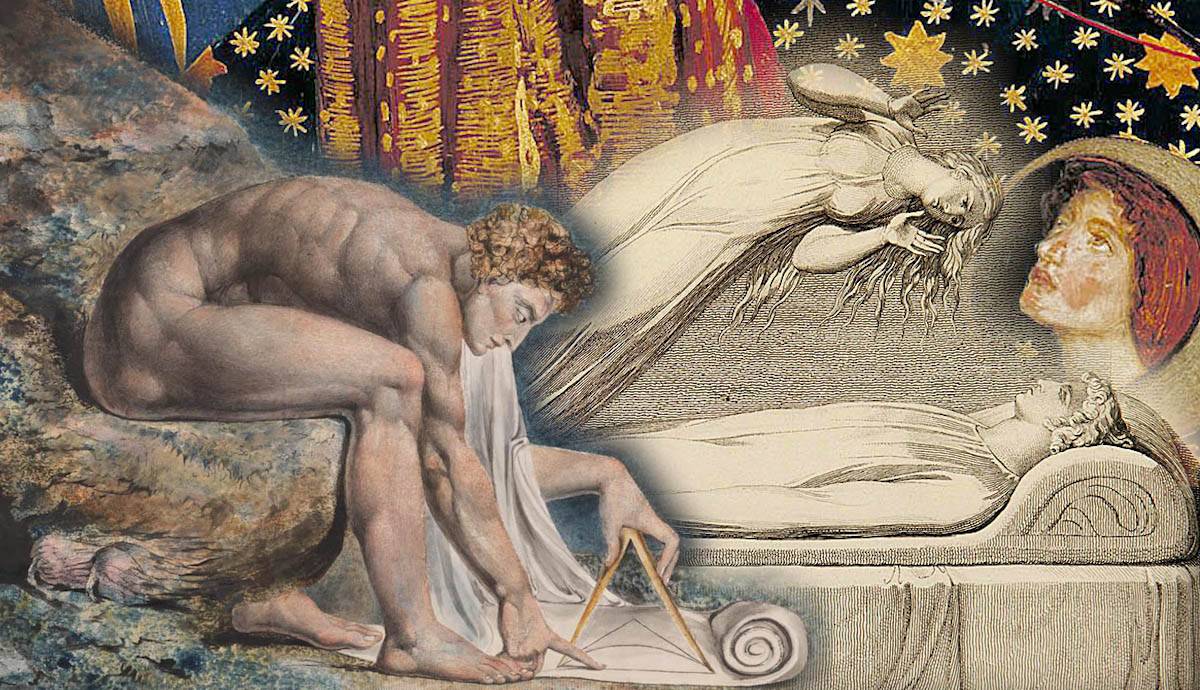 William Blake was a man of extraordinary talent whose prolific career spanned poetry, painting, printmaking, and more. Rising out of London in the late 18th century, William Blake’s paintings, prints, and poems came to encapsulate the spirit of English Romanticism with their billowing storm clouds, blackened undergrowth, and wild unbound creatures emerging from darkness. Blake was also a pioneering English poet who told daring and experimental stories about danger, power, seduction, and survival that continue to influence and inspire today. The stunning array of illuminated poems and books that Blake produced throughout his career are his strongest legacy. These works marry his unwavering passion for both visual and literary forms of expression into a singular whole. Yet despite all his creative success today, Blake lived out his entire life in relative obscurity, dismissed as a madman and a heretic who saw both angels in the air and the devil in the black plumes of factory soot. His life was filled with risk and subversion, teetering on a bridge between creativity and crime as he tore down figures of authority and praised the willful spirit of revolution.

William Blake was born in Soho, London in 1757 and would remain there for much of his life. Unlike many English artists, Blake was born into a family of modest means and grew up in an unpretentious neighborhood in Broad Street, London. Instead of taking him to school, Blake’s parents taught him to read and write at home. They often left him alone to roam the streets of London and the surrounding countryside, where he would take long rambles and let his imagination run wild. From an early age, Blake wrote poetry and he showed such artistic promise his parents decided to enroll him in Henry Pars Drawing School from the age of 10. When he was 14 years old, Blake moved on to an apprenticeship with the master engraver James Basire for the next seven years.

Throughout his life, William Blake experienced a series of strange, unexplainable “visions” which he claimed had a holy or spiritual significance. When he was four, he claimed he saw God “put his head to the window,” and at the age of nine, he saw “a tree filled with angels, bright angelic wings bespangling every bough like stars.”

These bizarre visions continued into adulthood with increasing ferocity as Blake saw angels walking amongst haymakers or was accosted by demons in stairwells. On his brother Robert’s deathbed, William Blake claimed he saw his soul rise up into the air, “clapping its hands for joy.” Blake believed his brother’s spirit remained beside him for the rest of his life, aiding him with some of his most successful artistic enterprises. No one really knows what caused these curious sightings. Many dismissed Blake as a liar or a madman. However, they demonstrated an innate spiritual understanding of the world, and became a sustaining life force that colored much of Blake’s Romanticism art and poetry.

As a young man, William Blake’s paintings were the most important medium of his practice, although he was also known as an English poet. He enrolled to study at London’s prestigious Royal Academy of Art at the age of 21. London was on the brink of dramatic change as industrialization expanded across the horizon and Enlightenment rationalism gradually took hold – Blake soaked up these surroundings with a mixture of trepidation, fear, and excitement.

Classes at the Academy were far less inspiring for Blake; he quickly grew tired of the traditional teaching methods led by portrait painter Sir Joshua Reynolds. William Blake believed these lessons were stifling his creativity, and thus he soon left to set out on his own path. In 1784, Blake tried to set up a shop selling prints with his family inheritance, but the business failed to take off. Instead, Blake managed to earn a living for the rest of his life by making intricate and carefully crafted engravings and prints for private clients on commission.

In 1788, William Blake discovered his own form of printmaking, now known as “relief etching.” This involves applying an impervious liquid onto a copper plate and dipping the plate in acid to create a relief effect. The process allowed Blake to combine his own hand-written text with images, and to introduce areas of intense, atmospheric color. This radical breakthrough technique became the starting point for William Blake’s poems, stunning illuminated manuscripts, and illustrated books that would occupy much of his career. With these works, the English poet and painter skillfully merged written verse with drawn elements. His drawings were experimental interpretations rather than direct illustrations, typifying the Romanticism art of the era.

One of Blake’s most notable early illuminated manuscripts was Songs of Innocence and Experience: Showing two Contrary States of the Human Soul, published in 1794. The book featured a series of his own poems related to the conflicting themes of “innocence” and “experience” at the heart of human society, and how the two conditions bleed into and inform one another. Although simple and direct, these poems were in fact painstakingly constructed into streamlined, elegant verse, and they addressed a series of complex themes including childhood, religion, and society. William Blake’s illustrations that accompanied the poems seemed to blend effortlessly with the hand-written text, as seen in the poem Infant Sorrow, 1794.

Throughout his career, William Blake’s paintings were a soundboard for his most radical ideas, usually made on a small scale in watercolor or ink. As with his poems and illuminated texts, William Blake’s paintings echoed the spirit of Romanticism art with historical or Biblical characters set among dramatic landscapes. They were also carefully staged to become moralizing reflections on the state of society, with elements of symbolism embedded into their design.

William Blake’s painting of the English mathematician and scientist Isaac Newton is one such example – Newton is depicted bent forward and engrossed in his compass-drawn diagram, while ignoring the shimmering and vibrantly toned rocks behind him. This work then becomes a criticism of the rationality and reasoning of the English Enlightenment. It instead praises the messy, chaotic world of nature with the sensibility of Romanticism art.

As his career progressed throughout the 1790s, William Blake’s political views became increasingly radical and subversive, responding to the rising spirit of change across the world. These ideas spilled out into his rebellious illustrated poetry books of the period including The French Revolution, 1791. This tome celebrated the rise of democracy and the fall of the monarchy in France, a book Blake’s publisher Joseph Johnson refused to print for fear of imprisonment. Blake’s poetry volume America: A Prophecy, 1793 was equally as explosive; it was a searing commentary on the powerful principles of revolution inspired by the American Revolutionary War. The Marriage of Heaven and Hell, 1793, launched an unprecedented attack on the oppressive powers of state and church.

It was during this decade that Blake wrote his series of “prophetic books” that dive into an entirely fictional mythological world of his own creation, including The First Book of Urizen, 1794; The Book of Los, 1795; The Song of Los, 1795; and The Book of Ahania, 1795. Though they were obscure and misunderstood in their day, these books would later become recognized as iconic markers of the Romantic period, with a focus on the importance of creativity, rebellion, and freedom over rationalism, science, and state control. They would also come to mark out William Blake as a leading English poet of the Romanticism art era.

A Time Of Struggle

The early 19th century was a particularly challenging period for the English Poet. He was commissioned to design illustrations for Robert Blair’s published poem The Grave in 1805, but then was bitterly disappointed when the task for completing the final engravings was passed on to another craftsman. In 1809, Blake organized an art exhibition of his own work at his family home in Soho. The display featured a series of never-before-seen large-scale paintings depicting strange spiritual, political, and naval figures, which Blake claimed were made in “the grand style of Art.” Sadly, only a small number of visitors came, and the only review published of the show described Blake as “an unfortunate lunatic.”

A Final Burst Of Life

The last ten years of Blake’s life were remarkably more successful and prolific: he came to produce some of his finest works of art during this period. The artist John Linnell commissioned Blake to paint a series of illustrations for Dante’s Divine Comedy. Blake rose to the occasion with over 100 different watercolor illustrations made with exquisite attention to detail, demonstrating the draughtsmanship skills Blake had acquired throughout his lifetime. Many of these illustrations were made while Blake was ill and bedridden, including the striking portrayal of The Inscription Over the Gate, 1824-7. This was the last major body of work Blake would create before his death in London in 1827. At this time, his name was still in relative obscurity and he had no inkling of just how powerful and influential his voice would become through time.

Although he was largely disregarded in his day, William Blake’s unrelenting creativity and rebellious spirit have influenced a huge wealth of creative thinkers, including poets, musicians, novelists, and artists. It is only in retrospect that we have been able to unravel the complexities of Blake’s ideas and how they tied in so innately to the time in which they were made. The Pre-Raphaelites, including Dante Gabriel Rossetti, were deeply inspired by Blake’s Romantic celebration of Biblical subjects as an antidote to rising industrialization and they did much to raise awareness of Blake’s practice in the generations that followed. Blake also preceded the English Romanticism art of painters including J.M.W. Turner and John Constable, inspiring them to respond intuitively to the wild and chaotic spirit of the natural world around them. Other notable voices influenced by Blake across popular culture include the poets Walt Whitman and William Butler Yeats, novelists Philip Pullman and J.R.R. Tolkein, the artist Eduardo Paolozzi, and the musician Bob Dylan. William Blake’s incredible legacy lives on to this day, and will continue for many more generations to come.

5 Techniques of Printmaking as Fine Art