The famous composer Wolfgang Amadeus Mozart left behind a legacy that could only have been created by a musical genius. His life was, however, veiled with mystery! 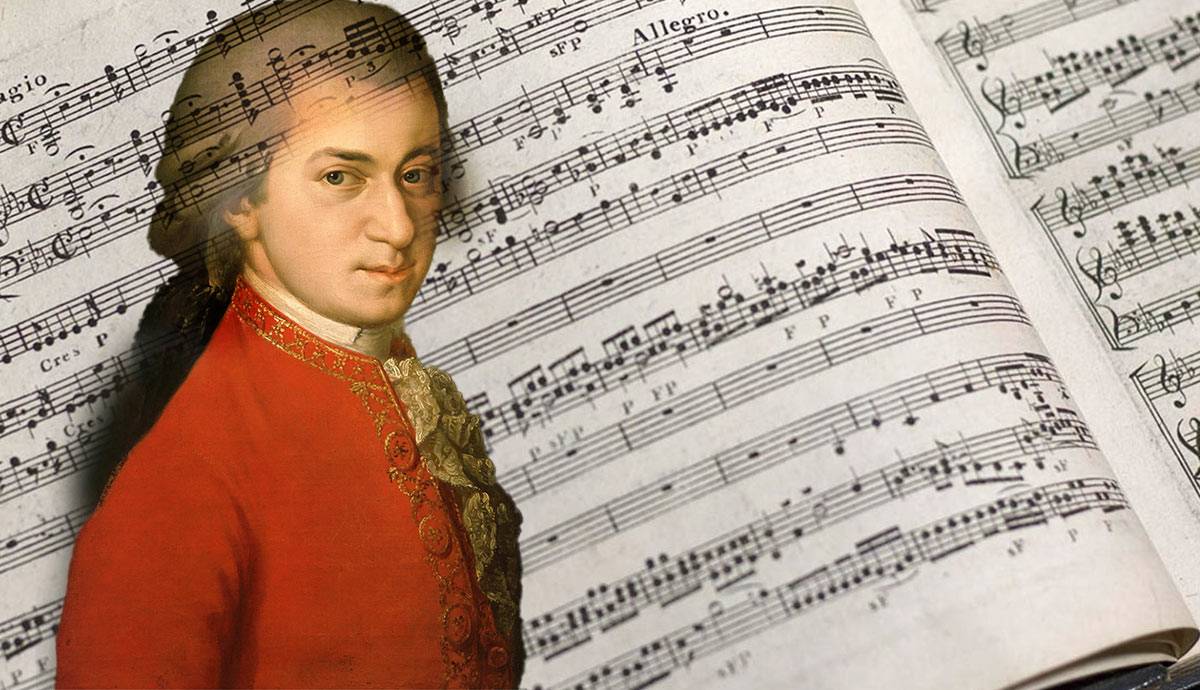 Born in Salzburg, Austria, in 1756, Wolfgang Amadeus Mozart continues to be praised to this day as one of the most influential and prolific composers of the classical period. Over 600 works of symphonic, chamber, operatic, and choral music are attributed to Mozart’s musical heritage. Due to being born into a musical family, his talent was able to prosper beyond the usual norm. Mozart could read and write music by the age of five, and he was already writing his first compositions at the age of six. Everyone was able to see what a rare gift the famous composer had.

The greatness of Wolfgang Amadeus Mozart can be, in part, attributed to the unyielding ambition of his father. Leopold Mozart was a noted composer, instructor, and violin player, working in the service of the archbishop of Salzburg. Leopold and his wife, Anna Maria, strived to pass on their love for music to their children.

In 1762, Leopold brought his son, Wolfgang, to perform before the nobles at the Imperial court in Vienna, Austria. The performance was a success and from 1763 to 1766, Leopold took his family on a musical tour across Europe. They traveled from Paris to London, all the while performing before royal families. Wolfgang Amadeus Mozart came to be known as the most renowned child prodigy. He thrived as a skillful keyboard performer but as a composer and improviser too. The famous composer frequently wrote instrumental works and musical pieces in German and Latin. By 1768, he produced his first original operas.

At the age of fourteen, Leopold sent him to Italy, attempting to establish his name as an opera composer. In Rome, Mozart was well received, and he even became a member of a  papal order of knighthood. During this period, Wolfgang Amadeus Mozart produced his first large-scale operas, including Mitridate, Ascanio in Alba, and Lucio Silla.

At this time, Leopold began urging his son to venture towards Paris. After nine burdensome months in the French capital, Wolfgang Amadeus Mozart returned to Salzburg once more. The unfortunate quest threw him in a state of depression, aggravated by the passing of his mother. During his stay in Paris, Mozart wrote music to order, including the Sinfonia Concertante, the Concerto for flute and harp, and the ballet music, Les petits riens. He also began working as a music teacher.

Then came his prosperous years in Vienna, from his arrival at the age of twenty-five, until his premature death at thirty-five years old. This period of ten years represents one of the most prominent developments in the entire history of music. Mozart’s evolution as an opera composer remains remarkable in particular. His initial achievement was the German Singspiel, Abduction from the Seraglio, premiering in 1782. Mozart then took on the Italian opera with Le Nozze di Figaro (The Marriage of Figaro), Don Giovanni, and Cosi fan tutte.

Mozart’s final and perhaps, most notable opera is Die Zauberflöte (The Magic Flute), from 1791. In this piece, the famous composer turns back to the German language and combines theatre and musical expressions, ranging from folk to classic opera. Wolfgang Amadeus Mozart’s swan song is the Requiem Mass, commissioned by a financial supporter, unknown to Mozart. Supposedly, the famous composer started to become obsessed with believing that he was writing it for himself. Due to his overbearing illness and exhaustion, he could only finish the first two movements and write sketches for several more. After Mozart’s passing, his student, Franz Süssmayr, crafted an ending for the last three sections. Wolfgang Amadeus Mozart, the everlasting musical nobility, died prematurely in Vienna on December 5th, 1791.

The concept of Freemasonry is defined as an aggregate of fraternal organizations scattered throughout Europe. Their teachings, history, and symbolism are said to be inspired by the traditions of the Middle Ages. The Masons of Mozart’s time were also under the influence of rationalism, humanism, and skepticism towards outdated ideals. According to historians, Mozart was initiated into a Masonic lodge, The Crowned Hope, in Vienna when he was 28 years old. Over time, he rose to the status of a Master Mason. Reportedly, Mozart persuaded his father, Leopold, to become a Mason too, and possibly his friend Haydn. The famous composer allegedly wrote a substantial collection of music for the lodges and Masonic ceremonies, with an example of his Masonic funeral service, The Little Masonic Cantata. The most evident influences intertwine throughout his famous opera, The Magic Flute.

Pope Clement XII is known to have forbidden indulging in Freemasonry in 1738. The condemnation of the Church towards the order remains. Therefore, the bonds between the Pope’s beloved composer and the Masons are causing distress among the Catholics even today. However, Mozart also composed more than sixty pieces of sacred music in the course of his lifetime.

Allegedly, Mozart didn’t perceive a conflict between his Masonry and his Catholic practices. He even used to bear the title of the assistant choirmaster at St. Stephen’s Cathedral in Vienna, expecting to ascend as a master. Mozart found a fascination within Masonry because of its focus on the aspects of human dignity and freedom. The order represented an embodiment of revolutionary philosophy, breaking from restraints of aristocracy and oligarchy.

Throughout his musical legacy, the sense of the divine is all-powerful and ever-present. The spirituality of Mozart’s work remains majestic and reassuring. It celebrates the might of resurrection and faith. His Catholicism is devoid of the notion of terror and eternal damnation. In the long battle of light and darkness, for Mozart, divinity prevails.

Wolfgang Amadeus Mozart’s famous piece The Magic Flute is defined as a Singspiel opera, written in German with singing and dialogue. It features the elements of comedy, magic, and fantastical creatures. Prince Tamino runs through the woods, chased by a dragon. When the beast prepares to devour him, three women, cloaked in black, appear before him. They slay the dragon at once with the overbearing might. Then they summon their leader, the Queen of the Night. The Queen initiates Tamino to rescue her daughter, Pamina, from the evil sorcerer, Sarastro. To assist him on his treacherous quest, she presents him with the Magic Flute.

Tamino discovers Pamina at Sarastro’s temple when they learn that they are in service of darkness all along. The Queen of the Night intends to banish the world into oblivion. All his beliefs are proven to be misguided, and now the guilt and doubt devour him. For the day to conquer the night, they must pass three trials of wisdom. Tamino and Pamina gloriously overcome the trials with the powers of the Magic Flute. In the end, they thrive and reclaim the balance in the kingdom.

Three months before his passing, Mozart completed The Magic Flute and The Clemency of Titus. Unfortunately, The Requiem Mass was left behind unfinished. Interestingly enough, Mozart and his librettist for the Magic Flute, Emanuel Schikaneder, were said to be members of the same Masonic lodge. This curiosity led to speculation about the possible Masonic symbols and references hidden in the opera.

Namely, the original production of Die Zauberflöte occurs in Egypt, a country from where Masonry traces its origins. Some Mozart scholars even believe that the Queen of the Night symbolizes the figure of Maria Theresa. She is known as the Empress of the Holy Roman Empire who banned the Freemasonry movement in Austria.

Allegedly, the famous composer envisioned the piece as a dramatic interpretation of a Masonic initiation ceremony. Tamino endures a sequence of trials comparable to the Masons’ obligations in the process of entering the order. During the Masonic initiation ceremony, the candidate undergoes four elemental tests relating to air, earth, water, and fire. The aim is for the candidate to prove that he possesses a proper balance of all elements. During the second act of the opera, Tamino begins the initiation with mastering the elements of earth and air, complete with fire and water.

Harmony within geometry represents a crucial element in the philosophy of Freemasonry. Their belief is contingent on the concept that geometry captures the divine harmony of the universe. Die Zauberflöte conveys the magic of that harmony and can balance out all the elements. The flute is made of wood from the earth in the presence of rain and thunder, representing water and fire. Finally, it plays the music by the breath of someone truly wise, able to string the tune that brings the sacred harmony.

On the evening of his premature death, Wolfgang Amadeus Mozart experienced a vision. He allegedly claimed to witness, at the very moment, that night’s performance of The Magic Flute. Reportedly, his final words were: “Silence! Silence! Now, Hofer is taking her high B-flat.” At that exact time, Josepha Hofer sang the Queen of the Night aria. To this day, Die Zauberflöte remains one of Mozart’s most celebrated operas. The glorious Queen of the Night aria continues to be one of the most recognizable musical pieces in the history of classical music.

Barbarian Invasion: The Beginning of the End for Rome?