HomeStoriesWunderwaffe! 8 Superweapons of the Nazis

Wunderwaffe! 8 Superweapons of the Nazis

During the Second World War, the Germans created some of the most advanced weapons, pushing the boundaries between reality and science fiction. 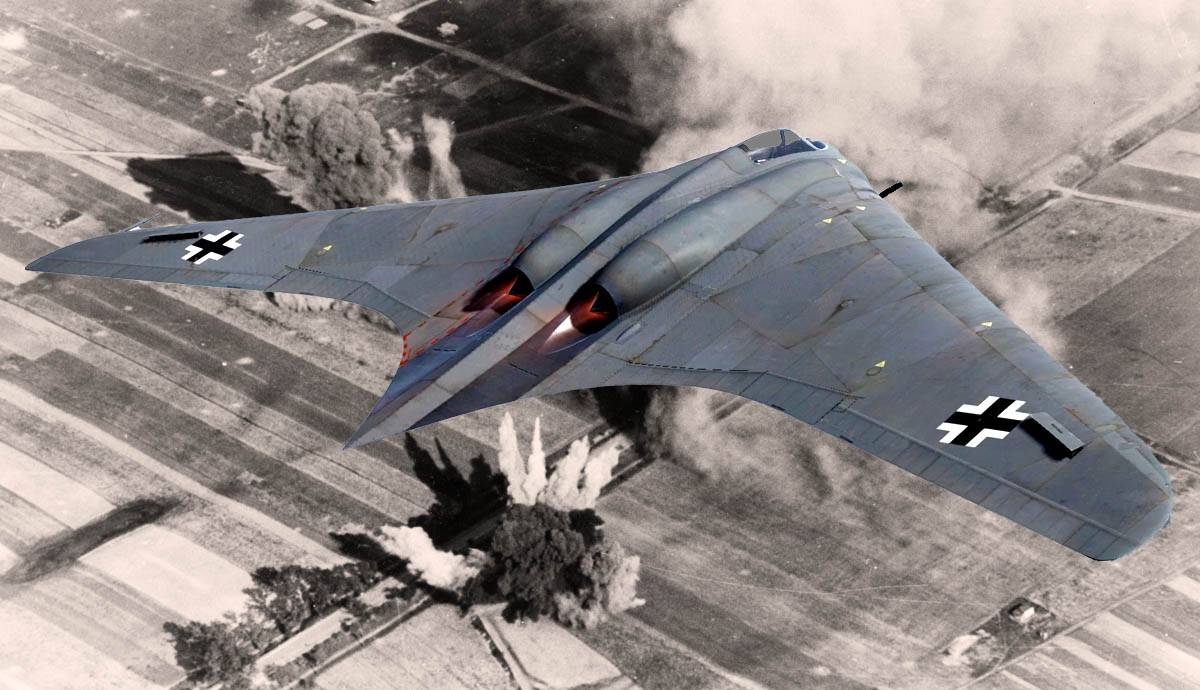 Throughout the Second World War, the Nazis created a slew of unorthodox weapons, some of which saw battlefield action and some of which never made it out of the concept stage. Some of these weapons were truly terrifying, utilizing technology that very few people had seen before. They struck terror into the hearts of their victims, whether those victims were soldiers on the battlefield or civilians in the cities and towns. Most of these weapons were revolutionary in design and went on to become the fathers and grandfathers of weapons systems that we have today, as their ideas were improved upon by the victors of World War II. And while some were awe-inspiring and impressive beyond a doubt, some were truly bizarre. Here are some of the most noteworthy examples of the Wunderwaffe inventory.

The Me-262 “Schwalbe” (Swallow) was the world’s first jet-powered fighter aircraft and arguably the most prominent of Hitler’s Wunderwaffe aircraft. It would have seen active service earlier in the war, but problems with metal quality, engine, and political interference meant the aircraft only saw action from April 1944. The Me-262 was so superior in the air that the Allies could only counter its effectiveness by destroying it on the ground and during take-off and landing. Its incredibly high rate of climb compared with prop-driven fighter planes at the time meant that once airborne, the Me-262 was almost impossible to intercept.

Had the Me-262 been introduced earlier in the war, it might have had a significant impact, but the reality was that too few were manufactured. Allied bombing had a disastrous effect on Germany’s ability to source quality material, and it slowed down production time drastically. As a result, Germany decided to focus on producing aircraft that were easier to manufacture.

It went by many names. The Germans named it the Kirschkern (Cherry Stone) or the Maikäfer (Maybug), while the British called it the “Buzz Bomb” and the “Doodlebug.” The Reich Aviation Ministry designated it the “Fi 103,” but whatever name it went by, the V-1 was a terrifying weapon. It was the first of the so-called Vergeltungswaffen, or “Vengeance Weapons,” used by Nazi Germany and designed to strike terror into the hearts of the enemy. The V-1 was the world’s first cruise missile.

The Nazis first launched V-1s at London on June 13, 1944, one week after the Allied landings at Normandy. At first, over a hundred V-1s were being launched every day, but as the Allies progressed further eastwards, the V-1s limited range meant that targets had to move eastwards as well. As England fell out of range, V-1s were launched at targets in the Netherlands and Belgium and continued right up until the end of the war.

Defenses against the V-1 included barrage balloons and the usual anti-aircraft guns, but one method was effective, albeit extremely dangerous. Fighter pilots could use their aircraft’s wing to flip the V-1 upside down in flight and confuse its guidance system.

Ultimately, the V-1 proved effective in that it was cost-effective for Germany, and it forced Britain to divert much of its war effort into defending against them. By the end of the war, many thousands of V-1s had been launched.

The Me-163 represented an extremely bold experiment with weaponry. This Wunderwaffe was extremely dangerous to fly, partly due to the fact that it was not a true jet aircraft but a flying rocket with a skid for landing gear. Upon take-off, the wheels would detach, and landing would require the pilot to land the plane on the runway using a skid.

The hazardous operation of this aircraft was also compounded by the highly volatile rocket propellant called “T-Stoff,” which led to many mishaps, including the death of the high-ranking Oberleutnant and fighter ace Josef Pöhs.

The fact that the aircraft was rocket-powered meant that it could achieve unbelievable speeds that were unheard of at the time. It was the first piloted aircraft to reach a speed of over 1,000 kilometers per hour, and its record speed is 1,130 kilometers per hour (700mph). For comparison, the top speed of the P51-Mustang, considered a very fast prop-driven aircraft, was 440 miles per hour (708kph).

Only 370 Me-163s were ever built, and despite their revolutionary design and incredible speed, they proved to be underwhelming in their performance. Ten were lost in combat, while the Me-163 shot down only between nine and eighteen Allied aircraft.

Schwerer (heavy) Gustav was the largest artillery piece to have ever been built. It was a railway gun designed specifically for destroying French forts along the Maginot line. The gun was not ready in time for the campaign against France, but it did see action later in the war, during the Siege of Sevastopol, where it proved highly effective with its 800mm (31-inch) shells. During the siege, it destroyed a munitions depot located 30 meters (98 feet) below ground.

Fortunately for the Soviets, Sevastopol was the only instance where they would be on the receiving end of Schwerer Gustav. The gun was moved to Leningrad to take part in the siege there, but the Soviets had already lifted the siege before the gun could fire.

The whole artillery piece weighed 1490 tons and had a length of 47.3 meters (155 ft 2 in). It required a crew of 250 to perform the myriad duties involved in prepping the gun for firing. This involved laying track dedicated to the gun, digging entrenchments, and assembling the gun.

Along with Schwerer Gustav, “Dora,” a second gun was ordered. Traditionally, when artillery was ordered, the Krupp company, which manufactured the gun, never asked for payment for the first piece. As such, Schwerer Gustav was provided to the Wehrmacht for free. Although it looked impressive, this Wunderwaffe did not get to see much action.

The Maus (Mouse) was anything but little. It was the biggest fully-enclosed armored fighting vehicle ever built. Weighing in at 207 tons and with a length of 33 feet (10.2 meters), the Maus would have certainly been a terrifying sight on the battlefield if it had ever been deployed. Five were ordered, but only two were ever built.

They underwent trials in late 1944, and the 128mm gun was proven to be capable of destroying any and all armored vehicles used by the Allies, with some tests being successful at 3,500 meters (11,500 feet).

This Wunderwaffe, however, had considerable drawbacks. Building an engine powerful enough but small enough to fit in the vehicle was a challenge, and during testing, the fastest speed ever achieved was 14 miles per hour (22 kph). In addition to its slow speed, the vehicle’s weight made it impossible to cross most bridges. As such, the tank was intended to drive through rivers with the aid of a snorkel and was supposedly capable of submerging 26 feet (8 meters).

The war ended before the Maus could ever be put into action. The Russians captured the prototypes and sent them back to Russia for testing. The turret of the second tank was connected to the hull of the first tank. The surviving vehicle is housed in the Kubinka Tank Museum near Moscow.

6. The Horten Ho 229: A Wunderwaffe Far Ahead of Its Time

The project was a response to Hermann Goering’s demand for a light bomber that could carry 1,000 kilograms for 1,000 kilometers at a speed of 100 kilometers per hour. The result was a flying wing design that did more than its creators realized.

Like many other German Wunderwaffe, this machine never made it out of the prototype phase. Only three aircraft were built, but none ever saw action beyond the testing phase.

After the war, tests were done on mock-up versions of the Ho 229, and it was found that the aircraft did, indeed, have a smaller radar cross-section than other conventional aircraft at the time, although not significant. Although tests showed only a moderate improvement in the size of radar cross-section, being 80% of a contemporary prop-driven aircraft, the Horten’s speed, combined with this reduction, would have made it nigh impossible to intercept.

Although Reimar Horten claimed that he had ideas to coat the plane in radar-absorbing dust, his claim came decades after the war, when stealth technology was being understood in the media. Historians remain skeptical of his claims. Nevertheless, the aircraft did absorb radar waves, serving as a starting point for America’s own stealth program.

The only surviving piece is the third prototype central chassis with engines and cockpit, housed at the Smithsonian National Air and Space Museum in Washington DC.

Perhaps one of the best known of Hitler’s Wunderwaffe was the V-2, a successor to the V-1 and the world’s first long-range guided ballistic missile. The V-2 was Hitler’s revenge for the Allied bombing of German cities, and they began falling from the skies over Allied cities from September 1944 onwards. Over 3,000 were launched during the course of the war, and over 9,000 civilian targets lost their lives. But its most deadly toll was on the forced laborers. Over 12,000 laborers and concentration camp prisoners died in the production of these weapons.

The guidance system was a particular problem for the Allies, as it used a complex set of gyroscopes that could not be jammed. Initially, the British assumed the guidance system made use of radio, and efforts to jam the weapon proved useless, especially since it descended on its targets at a speed of almost Mach 3.

The V-2 traveled at supersonic speeds, and there was no defense against it. It struck without warning and made no sound before impact. They were launched from mobile platforms that could be well-hidden in wooded areas, making it extremely difficult for Allied bombers to spot and neutralize them.

After the war, the Soviets and the Western Allies raced to retrieve as many V-2s and German scientists as possible. The principal scientist who worked on the program, Wernher von Braun, was captured by the Americans and went on to form the foundation of the first rockets used in America’s space program. The Soviets also used V-2 technology to further their space program. Sputnik was launched into orbit by the world’s first intercontinental ballistic missile, a direct descendant of the V-2 and designed by German scientists working for the Soviets.

8. Landkreuzer P. 1000 “Ratte”: A Wunderwaffe Too Big for the Battlefield

Although it never made it out of the concept stage, it deserves a place as one of Germany’s Wunderwaffe for the sheer audaciousness of its design.

The P. 1000 Ratte was more than a tank. At over 1,000 tons, the vehicle was more of a mobile battle platform than an actual tank. The vehicle was designed to be a platform for two 280mm guns and protected by four 128mm anti-aircraft guns. Between 20 and 41 soldiers would operate the entire machine.

Hitler was enamored with the concept, but Albert Speer, seeing no use for such a ridiculously large tank, canceled the project before any prototype could be built. Of course, this list is only a small portion of the Wunderwaffe employed or imagined by the Nazis. Some designs were outlandishly ridiculous, some were science fiction that would take decades to build, and some were absolutely deadly. If there’s one thing we know for sure, it’s that the cruel and unstoppable Nazis were not lacking in the creativity department.

Gemini & Apollo: The Cold War and the Moon Landing