He was head of the Luftwaffe and the second-most powerful man in Nazi Germany: this is the story of Hermann Goering. 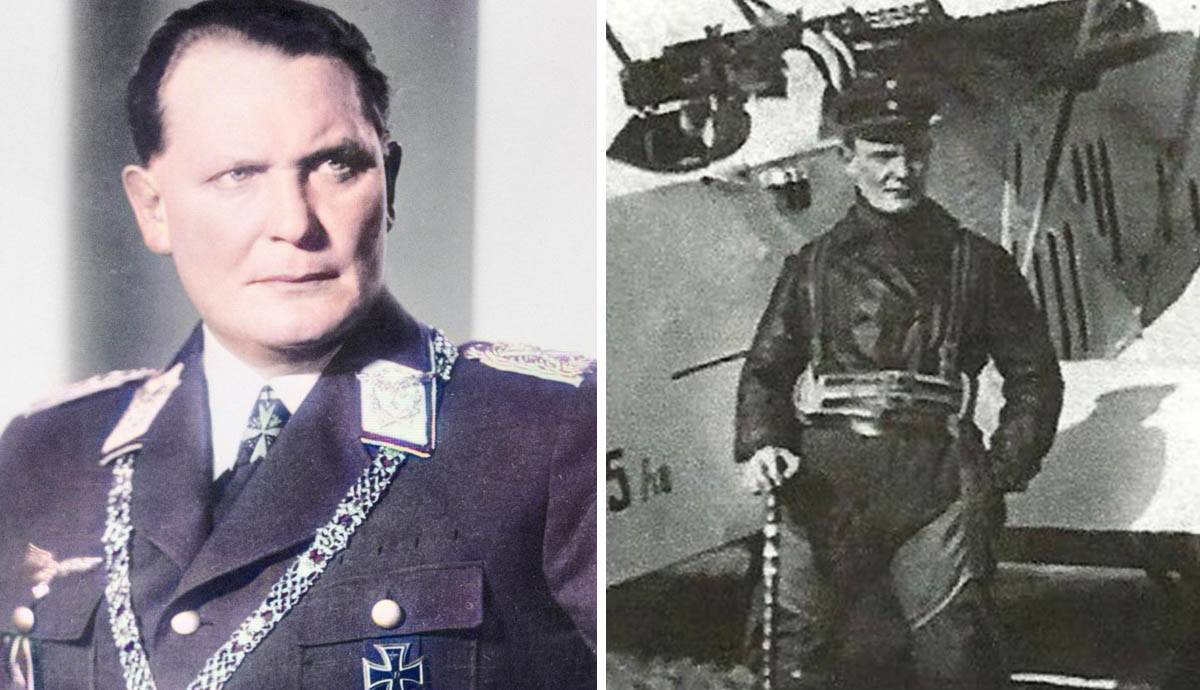 Hermann Goering was, without a doubt, one of the most powerful figures in the Third Reich. His close friendship with Hitler and his political positions gave him the power to greatly influence not only Germany but the entire course of the war. His power and wealth made him the second-most powerful man in all of Germany, exceeded only by Hitler himself. Goering is perhaps best known as the head of the Luftwaffe, Nazi Germany’s formidable air force, but behind the position was a man with a life checkered by success and failure.

Hermann Goering’s father was a former cavalry officer who served as the first Governor-General of German South West Africa (now Namibia). On January 12, 1893, Hermann was born while his father was serving as consul general in Haiti. Hermann’s mother had returned to Germany to give birth and left soon afterward, only to see her son three years later. Hermann was placed in the care of his mother’s friend in Bavaria. He was the second-youngest of five children by his father’s second marriage. His mother later had an affair with Hermann’s godfather, Hermann Epenstein, a wealthy Jewish physician.

At age 11, Goering was sent to boarding school, which he enjoyed far more than his life at home. At one point, he feigned illness to avoid having to return and, as a result, was allowed to stay at the school. He had an intense interest in the military from a young age and often dressed up in a Boer uniform his father had given him. At 16, Hermann was sent to a military academy, where he graduated with distinction. When World War I broke out in August 1914, Goering was already in the military, stationed with his unit at Mülhausen on the border with France.

During the first years of the war, Goering served as an infantryman, fighting in the trenches. He was hospitalized with rheumatism which he suffered due to the dampness of trench warfare. When he was recovering, a friend, Bruno Loerzer, convinced him to join what would become the Luftstreitkräfte (air combat forces). His application failed, but he ignored this and transferred himself anyway. When his transgression had been discovered, he was confined to three weeks in barracks, but this sentence was never carried out, as Goering’s association with Loerzer had already been made official. The pair flew reconnaissance and bombing missions and were both awarded the Iron Cross, first-class, for their efforts. For the rest of Goering’s life, his career would be shaped by the air forces.

He flew with various fighter squadrons and suffered an injury in the hip, which put him out of action for almost a year. During his time in the Luftstreitkräfte, he scored 22 air victories and was awarded several medals. Despite his success, he was widely unpopular with his peers and subordinates due to his arrogance.

After the war, he joined many others in believing that Germany had lost the war not due to military defeat but by the civilian betrayal by Marxists and Jews. This was a fundamental belief that helped give rise to Nazism. During his post-war period, Goering worked briefly at Fokker and for a Swedish airline. He also did barnstorming, which is performing tricks as a stunt pilot.

Hermann Goering joined the Nazis in 1922 after hearing one of Hitler’s speeches. Goering’s organizational skills impressed Hitler, and Goering was given command of the Sturmabteilung (SA).

During the November 1923 Beer Hall Putsch (the failed Nazi coup), when Hitler was arrested, Goering was shot in the groin. He and his family were smuggled out of Germany, where he received surgery in Innsbruck, Austria. He was given morphine for the pain, which kickstarted a lifelong addiction to the drug for which he twice underwent treatment.

In 1927, Goering returned to Germany and rejoined the Nazi Party, using his contacts to gain prestige. In the 1928 election, the Nazi Party won 12 seats in the Reichstag, and Goering occupied one of them. He was acknowledged as leader of the lower house, and in the 1932 election, when the Nazi Party won 230 seats, Goering was elected President of the Reichstag. With his high status in the Reichstag, Goering had the ear of the 84-year-old president of the Weimar Republic, Paul von Hindenburg. By influencing him, Goering managed to outmaneuver successive chancellors until Hindenburg felt obliged to invite Hitler to become chancellor on January 30, 1933.

As Minister of the Interior of Prussia, Germany’s largest and most influential state, Goering used his power to help Nazism become more potent. He established concentration camps for “opponents” and created the Nazi secret political police, the Gestapo. After the Reichstag fire in 1933, Goering was able to place the blame on communists and other enemies of Nazism to solidify Hitler’s hold on power. Once the opponents of Nazism had been nullified, Goering’s position as the second-most powerful man in Germany was unassailable.

Throughout the rest of the decade, he accrued many offices of state and titles. He became Master of the German Hunt and of the German Forests. He replaced Hjalmar Schacht as the minister for economic affairs and became Hitler’s roving ambassador. During this time, he took a leading part in the Night of the Long Knives, ridding Germany of the Sturmabteilung (SA) leadership, and in the same year, he ceded control of the Gestapo to Heinrich Himmler.

His position of power allowed Goering to enrich himself, attaining a huge forest estate north of Berlin where he was a keen hunter. At this estate, he kept part of his huge art collection, much of which was plundered from territories conquered by the Nazis. After the death of his first wife, he married again to the actress Emmy Sonnemann, and he spent much of his time with her at the estate. In 1938, Emmy bore a daughter, Edda, who was Hermann Goering’s only child.

At the beginning of the war, Goering’s Luftwaffe performed admirably on all fronts, sweeping aside the Polish air force in under a week, and decimating Belgian, Dutch, and French resistance the following year. Hitler named Goering his successor and Reichsmarschall des Grossdeutschen Reiches, making him superior in rank to all Field Marshals in the army and the air force.

From September 1940 to May 1941, however, the Luftwaffe suffered significant losses during the Battle of Britain. Although Goering was confident about Germany’s ability to control the skies over Britain in order to pave a way for the invasion of the island, the Royal Air Force and British resilience forced the Luftwaffe to defeat and inflicted heavy losses. The Luftwaffe lost almost 2000 aircraft and many more pilots. As a result, Operation Sea Lion – the planned invasion of Britain – was postponed indefinitely.

In July 1941, during the first month of the invasion of the Soviet Union, the Luftwaffe performed exceptionally well, eliminating virtually the entire Soviet Air Force. Still, by the second month, the Luftwaffe had only 1000 planes operational. The simple truth is that the Luftwaffe did not have enough aircraft to hit all the targets it needed to hit. With overstretched supply lines and exhausted pilots, the contribution to the German effort on the ground could not achieve what Hitler wanted or expected. Furthermore, strategic errors allowed the Soviets to regroup and stop the Germans from taking Moscow. As the war dragged through 1942, long past Hitler’s predictions for a quick victory, attrition took its toll on the Germans, including the Luftwaffe.

During the disastrous encirclement of the German 6th army at Stalingrad, the Luftwaffe wasn’t even capable of providing half the required supplies to the trapped Germans. Three hundred tons of equipment and food were needed per day. On the best day, the Luftwaffe only managed 120 tons. This was despite Goering’s complete confidence that supplying the 6th Army would be no problem.

On the Western Front, Allied bombing runs were now possible with the extended fuel tanks of the American P51-Mustangs flying escort. The Luftwaffe was only capable of defending German skies piecemeal. Goering quickly lost favor with both Hitler and the German people and began to spend more time at his estate. On D-Day (June 6th, 1944), the Germans only had 300 fighters and a handful of bombers in the area to counter the Allies’ fleet of 11,000 aircraft.

The End of the War (and Hermann Goering)

As the war drove to its final conclusion, and with his estate destroyed, Goering moved, with his family, to his home in Obersalzburg. On the same day, April 22, 1945, Hitler announced to his generals in his bunker that he would commit suicide. Upon hearing this, Goering wrote a letter asking Hitler for the right to take over Hitler’s position upon his death. Goering’s rival, Martin Bormann, convinced Hitler that this was a move by Goering to usurp power, and Hitler, branding Goering as a traitor, stripped him of all his titles and removed him from the Nazi Party.

Goering was now hunted by the Germans as well as the Allies. He was picked up by a passing Luftwaffe unit but managed to make his way to the US lines. On May 5, he was taken into custody by US forces.

At the Nuremberg trials, he was found guilty on numerous charges, including waging a war of aggression, the torture of prisoners of war, and plundering works of art and other property. He was found guilty and sentenced to be hanged, but the night before his sentence was to be carried out, he committed suicide by taking a cyanide capsule.

The Weimar Republic: How Did it Allow Hitler’s Rise to Power?