HomeStories5 Famous Horses and Their Roles in History

5 Famous Horses and Their Roles in History

From racehorses to war horses and more, here are the fascinating stories behind 5 of history’s most famous horses. 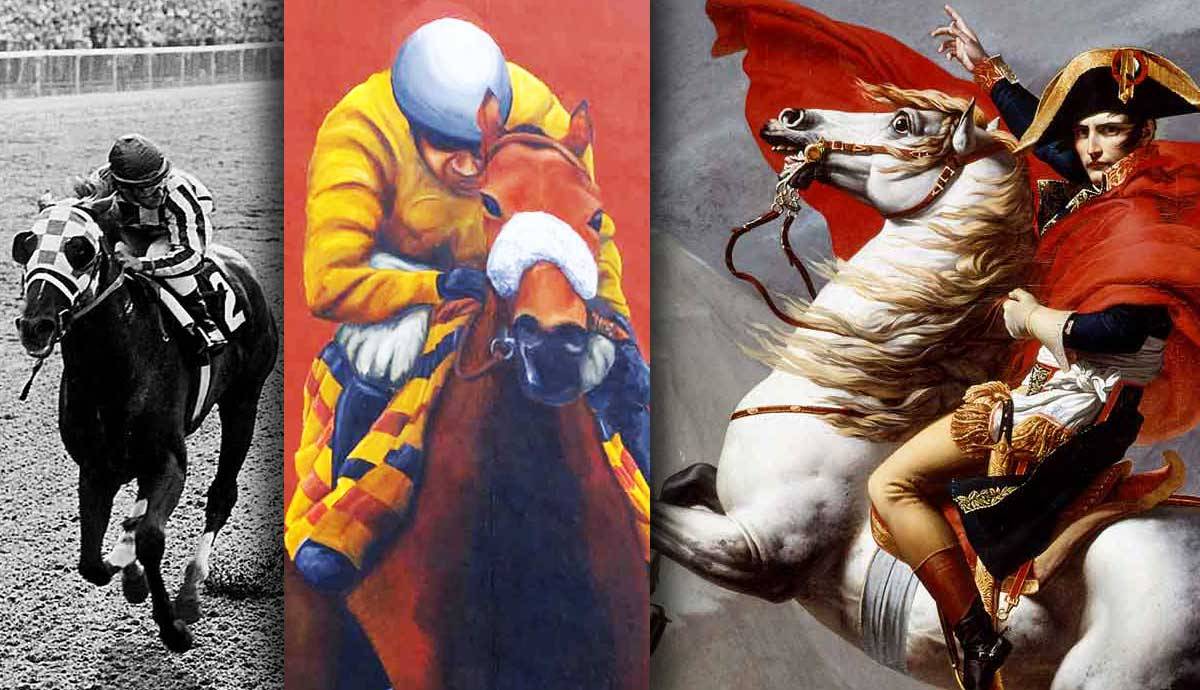 For millennia, horses have been an integral part of human history. When Eurasian civilizations took their shaky first steps, horses were there to provide transport, hard labor, and food. Entire cultures were built around them, and many technological advancements were centered around our equine friends. Stirrups, horseback riding, saddles, husbandry, and battle tactics all revolved around our close relationship with the horse. Individual horses have also left their hoofprints in the history books. They have achieved fame through exploits on the battlefield, relationships with famous people, celluloid, and through athletic prowess. Here are five examples of famous horses that will live on in our memory as the most well-known and respected examples of their kind.

1. Bucephalus: The Famous Horse of Alexander the Great

Bucephalus stands as a seminal example of a famous warhorse. He was a huge black stallion who, according to legend, was wild and untameable. That was until Alexander approached the beast and steered him towards the sun, putting his shadow (and the symbolism of fear behind him). When Alexander rode into the arena on the back of Bucephalus, King Philip II (Alexander’s father) was in awe and realized that his son was destined for great things.

Bucephalus and Alexander became inseparable, and they went into battle together from the conquest of the Greek city-states all the way to India. After the final defeat of Darius III, and while Alexander was away on an excursion, Bucephalus was kidnapped. Alexander was furious and promised to destroy the entire region and slaughter every inhabitant unless his horse was returned. Bucephalus was promptly returned, along with a plea for mercy.

Bucephalus died, likely from old age, after the Battle of Hydaspes in 326 BCE, and Alexander founded the city of Bucephala after him. Bucephalus stands as an example of the most famous horse in ancient history.

Originally named “Golden Cloud,” this actor was brought in to audition for Roy Rogers in the film Under Western Stars. After Roger’s first ride with Golden Cloud, he knew immediately that this was the horse he wanted for the part. He didn’t even consider any of the other horses. Fellow actor Smiley Burnett remarked, “Roy, as quick as that horse of yours is, you ought to call him Trigger.” The name stuck, and the palomino stallion began his rise to fame.

Rogers was so impressed with the horse that he bought him for $2,500 so that they could star in movies together.

Known as “The Smartest Horse in Movies,” this famous horse knew over 100 tricks and could walk 50 feet on his hind legs. Trigger was also a gentle horse with a considerate and patient personality. His popularity saw him star in no fewer than 88 movies and 100 episodes of TV, making him arguably the most famous horse on screen.

Trigger lived out his days with his owner and died at the age of 30 on July 3, 1965. His fame saw him even become the star of a comic book franchise. After his death, Trigger was stuffed and mounted and was on display, rearing on his hind legs, until the museum where he was displayed closed, and he was auctioned off to the television channel RFD-TV for $266,500.

One of the most famous horses in sporting history, Red Rum was a steeplechaser that overcame physical disabilities and brought joy to the hearts of millions. Born on May 3, 1965 to Quorum and Mared, Red Rum got his name from the last three letters of each of his parents.

Originally intended to run one-mile races. Red Rum ran his best races at four miles and four furlongs. Despite developing laminitis in his hoof, he went on to have an illustrious career, winning the Grand National in 1973. In that race, Red Rum was in second place behind the Australian chaser, Crisp, for virtually the entire race. At the last fence, Red Rum was 15 lengths behind Crisp and created a great spectacle by pipping Crisp at the finish line by three-quarters of a length.

The following year, he won the Grand National and the Scottish Grand National, being the only horse to win both in the same year. Finishing second in 1975 and 1976, Red Rum won his third Grand National in 1977 by 25 lengths in what is regarded as one of sporting history’s greatest moments.

Although retiring in 1978, his fame would continue as Red Rum became a national celebrity, with his likeness appearing on toys and household items. He also appeared in public to perform opening ceremonies for buildings and events, as well as appearing as a guest on a TV talk show. Red Rum died at the age of 30 on October 18, 1995, making front page news across the UK the next day. He is still the most famous horse in Great Britain today.

4. Copenhagen: The Duke of Wellington’s Mount

“There may have been many faster horses, no doubt many handsomer, but for bottom and endurance I never saw his fellow.” – Arthur Wellesley, Duke of Wellington.

Of mixed Thoroughbred and Arabian parentage, Copenhagen was the famous horse ridden by the Duke of Wellington during his campaigns against the forces of Napoleon Bonaparte. Foaled in 1808, Copenhagen was named after the British victory at the Second Battle of Copenhagen.

Standing at 15 hands high and with remarkable endurance, Copenhagen’s career began as a racing horse, winning two races and finishing at least third in his total of 12 starts. In 1812, Copenhagen retired from racing and was taken to Lisbon. At the time, the British were fighting the French during the Peninsular War. Copenhagen was sold to a colonel (sources vary on the name) who gifted the famous horse to the Duke of Wellington.

Wellington rode Copenhagen in a number of battles, including the Battle of Waterloo, where Copenhagen held his owner in the saddle for 17 hours straight. After the battle, the Duke dismounted and gave his horse a pat on the flank. Copenhagen was not impressed and kicked at the Duke’s head, narrowly avoiding contact.

Copenhagen continued to serve the Duke during the occupation of France. While many war horses had similar careers and exploits, Copenhagen was a constant feature when depicting the Duke, a hero that saved Europe from Napoleon. In doing so, Copenhagen became an inarguably famous horse.

Locks of his hair were made into keepsakes, and Copenhagen enjoyed the parades and spectacles in which he took part. After his death in 1836 at the age of 28, Copenhagen was buried with full military honors. Nevertheless, the Duke fell into a rage at the funeral when he noticed one of the horse’s hoofs had been removed as a souvenir. The hoof in question was eventually bought by a farmer who promptly returned it to the Duke.

Perhaps the most famous horse in racing history, the record-breaking Secretariat was foaled in 1970. Secretariat had a powerful stretch-running ability, giving him an edge over his competitor. It meant he could gain strength and speed as the race wore on. In one race, he dawdled along in last place before kicking into gear and winning the race easily. This last-to-first finish became a signature style of Secretariat. At the age of two, he was named Horse of the Year, becoming the second two-year-old to capture the honor.

At the age of three, Secretariat became an icon of a famous horse. He won the Kentucky Derby and broke the time record at the Preakness Stakes. At the Belmont Stakes, he won by a whopping 31 lengths and still holds the record for the fastest time. He then won the Arlington Invitational before an upset defeat at the Whitney Stakes. He won the Marlboro Cup but lost again at the Woodward Stakes.

Then came the Man ‘o War Stakes, where Secretariat beat the world record holder, Tentam, by five lengths. The final race of the season was the Canadian Stakes, which was the final win for Secretariat.

This famous horse won 16 of his 21 races and managed three seconds and one third. He retired from racing and lived out the rest of his life as a stud, siring a number of major stakes winners. Secretariat was euthanized in 1989 at the age of 19 after suffering from severe laminitis: a painful disease affecting the hoof. After his death, his memory endured.

Numerous statues and memorials of him exist across the United States, and no fewer than 263 roads are named after him, which is more than any other athlete in sporting history. In 2010, the film Secretariat was released, starring Penny Chenery, Diane Lane, and John Malkovich.

Of course, there are many other famous horses throughout history that deserve to be mentioned. Warhorses such as Robert E. Lee’s Traveller and Napoleon’s Marengo deserve a mention, among others, while fictional horses such as Black Beauty and Mr. Ed also deserve to be remembered. While the need for horses in various fields has diminished over the years, we can be sure that in the sporting world, there will be many more famous horses in the future.