With her pioneering wire sculptures, Ruth Asawa united the world of crafts and visual arts. Her intricate and fascinating pieces were heavily inspired by forms found in nature. 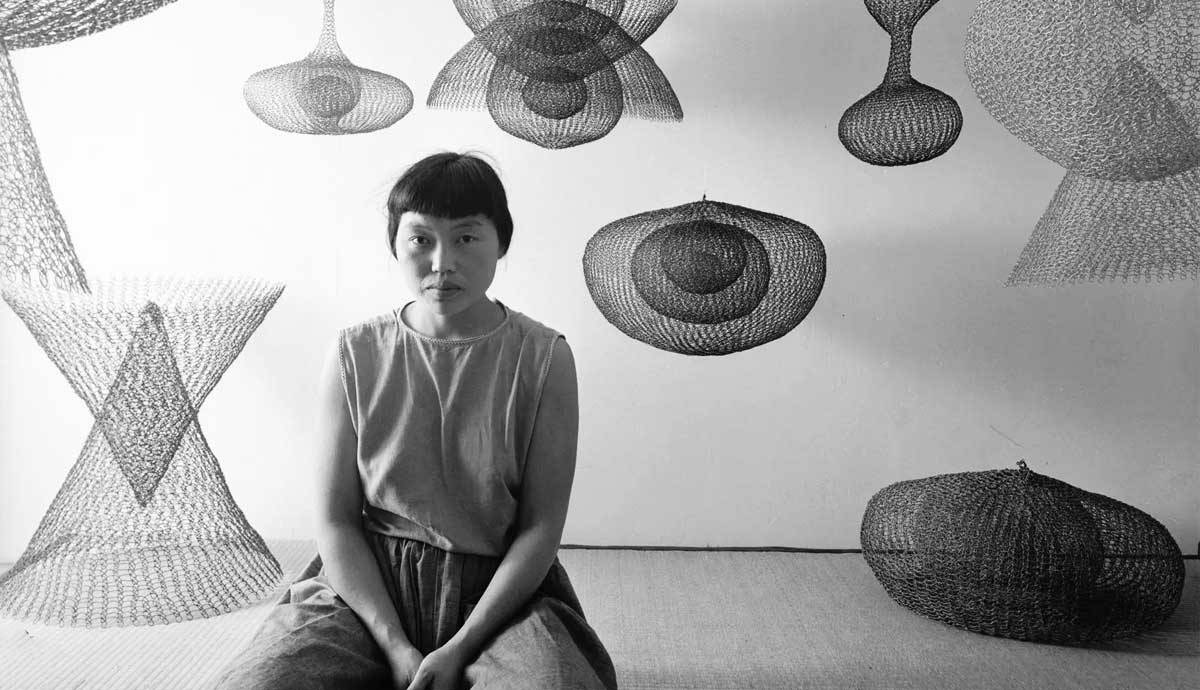 At first, the art world partially rejected Ruth Asawa’s work. The hanging display of her sculptures and craft-like appearance led to only a limited number of people accepting Ruth Asawa’s art. This changed after her work was on the cover of Arts & Architecture in 1952 and Vogue in 1953. In 1954, Ruth Asawa had her first exhibition in New York and one year later her works were bought by the Rockefellers and Philip Johnson. Despite the fact that all of her works are unique, many of them can be assigned to a group containing similar expressions of the artist’s ideas and influences during a specific time. Here are seven important works by Ruth Asawa.

Ruth Asawa is probably best known for her looped-wire sculptures. The artist preferred the works to be hung in groups, which makes them appear as one installation-like artwork. Asawa learned the technique on a trip to Mexico when she was volunteering as an art teacher for the American Friends Service Committee in 1947. She was interested in the wire-knitted egg baskets that she saw on this trip. Local craftswomen showed her how they made the baskets which would later result in the creation of the artist’s most recognizable sculptures. Ruth Asawa used different kinds of metals for her wire sculptures. She crafted the works by only using her hands to weave the metal together into loops.

With their hanging display, the organic sculptures remind us of forms that can be found in nature such as cocoons and water drops. The sculptures were inspired by an experience of Ruth Asawa’s childhood when she used to work on the farm of her parents. The artist said she would sit on the back of a horse-drawn leveler and draw shapes in the sand with her bare feet that resembled the sculptures she would create years later.

The artist almost poetically described her looped-wire sculptures and their fascinating translucent qualities by writing: “A woven mesh not unlike medieval mail. A continuous piece of wire, forms envelop inner forms, yet all forms are visible (transparent). The shadow will reveal an exact image of the object.”

The artist did not stop to create her looped-wire sculptures, but in the early 1960s, she began experimenting with what is now known as her tied-wire sculptures. It is difficult to single out one of Asawa’s tied-wire sculptures as more important than the others since they are – similar to the looped-wire works – a group of connected artworks that represent an important creative period of the artist’s life. They are also inspired by organic forms and are reminiscent of the shapes of trees and branches. As Asawa worked on the sculptures, their forms became increasingly abstract and geometric.

The intricate sculptures originated from a desert plant that Asawa received from a friend in 1962. She had trouble drawing the tangled form and modeled the plant out of wire. She felt that this would make it easier for her to draw the plant but then she had the idea to use it as an inspiration for her sculptures instead. Asawa’s tied-wire sculptures are usually displayed by being either hung from the ceiling or attached to a wall. The artist started out by using about 200 to 1,000 wires for the center of her sculptures. After that, she divided them into branches that look like delicately structured trees or shrubs.

Ruth Asawa’s creation of her electroplated sculptures correlated with the artist’s desire to clean her looped-wire sculptures. Since the metal of the sculptures started to oxidize over time, Asawa reached out to industrial plating companies during the 1950s requesting the cleaning of her artworks. None of the companies she contacted accepted her request except for C&M Plating Works. With their help, Asawa tried different methods to clean her sculptures. She also experimented with patinas, which are thin layers that develop on a surface due to weather, age, use, oxidation, or chemical action. The layer that forms on copper, for example, appears green, which is why many roofs of historic buildings have a blue-green color.

In the early 1960s, the artist saw crusty copper bars in a plating tank while she was at C&M Plating Works. She liked the green layer that formed on the metal and asked the people from the plating company if they could help her to imitate the color and crusty texture for her sculptures. After several attempts, they figured out a method to give Asawa’s sculptures the intended appearance. Ruth Asawa created her sculptures out of copper wires that would then be placed in a chemical tank for several months until the sculpture’s surface exhibited the incrusted texture and green color reminiscent of a piece from a sunken ship or corals.

During the 1960s, Ruth Asawa was commissioned to create several public artworks and fountains. The work called Andrea was the artist’s first public sculpture and was installed in Ghirardelli Square in 1968. The sculpture is based on one of Ruth Asawa’s friends called Andrea who was breastfeeding at that time. Andrea modeled for the artist while nursing her new baby.

The public display of a breastfeeding mermaid caused controversy in 1968. The realistic and figurative nature of Asawa’s mermaid also resulted in a conflict. While the architect who designed the square wanted a modern and abstract sculpture, Ruth Asawa’s figurative piece prevailed. The sculpture was well-received among the residents of San Francisco and they named the piece the fountain lady.

Ruth Asawa dedicated the San Francisco Fountain to the city on Valentine’s Day in 1973. The fountain is situated outside of the Hyatt Hotel on Union Square. The work contains many intricate and surprising details molded out of clay such as a naked couple sunbathing at the top of the fountain. Another detail shows the Alvarado Elementary School which is where Ruth Asawa established an arts program and whose students contributed to the work by making some of the small pieces. Many of Asawa’s friends and family members helped the artist with the work on the fountain.

The material that Ruth Asawa used for the fountain is the same clay that she made for many children due to her work as an arts activist in public schools. She mixed the clay, which is also called baker’s clay, by using only flour, salt, and water. After the modeling of the fountain was finished, the piece was cast in bronze.

The sculpture called Aurora was made by Ruth Asawa for a fountain located at the Embarcadero in San Francisco. It is made out of steel and was inspired by the art of origami which Ruth Asawa studied at the Japanese cultural school when she was a child. The well-known artist Josef Albers was Asawa’s teacher in college. Since the exploration of paper as a medium was an important curriculum there, Albers gave his students the assignment to create a three-dimensional work by folding flat paper. Josef Albers supported Ruth Asawa’s work as an artist. Her daughter described his support by saying: “my parents told Albers they were going to get married and Albers told my father: ‘Never let her stop doing her work. You must make sure she does her work’.”

From 1946 to 1949, Ruth Asawa studied at the experimental Black Mountain College in North Carolina. Her teachers included influential architect R. Buckminster Fuller and artist Josef Albers. Even though today Asawa is known for her wire sculptures, the artist originally studied painting, drawing, and design.

Ruth Asawa’s time at Black Mountain College and the works she made shaped her life and artworks immensely. The innovative and progressive approach encouraged her to have her own opinions and to pursue a career as an artist. Ruth Asawa lived with working female artists such as Anni Albers and Marguerite Wildenhain, which arguably made a career as a female artist seem more achievable, especially during that time.

Ruth Asawa’s success as a sculptor might make her drawings seem less relevant, but they had a great impact on her sculptures. The artist drew every day. It helped her concentrate, improve her perception, and create her sculptures. Asawa said that her curiosity was aroused by the idea of giving structural form to the images in her drawings and that these forms come from observing plants, the spiral shell of a snail, seeing light through insect wings, or watching spiders repair their webs.