Ruth Asawa made innovative and abstract works that exhibit the uniqueness of their material. Here is how the artist created her intricate and mesmerizing sculptures. 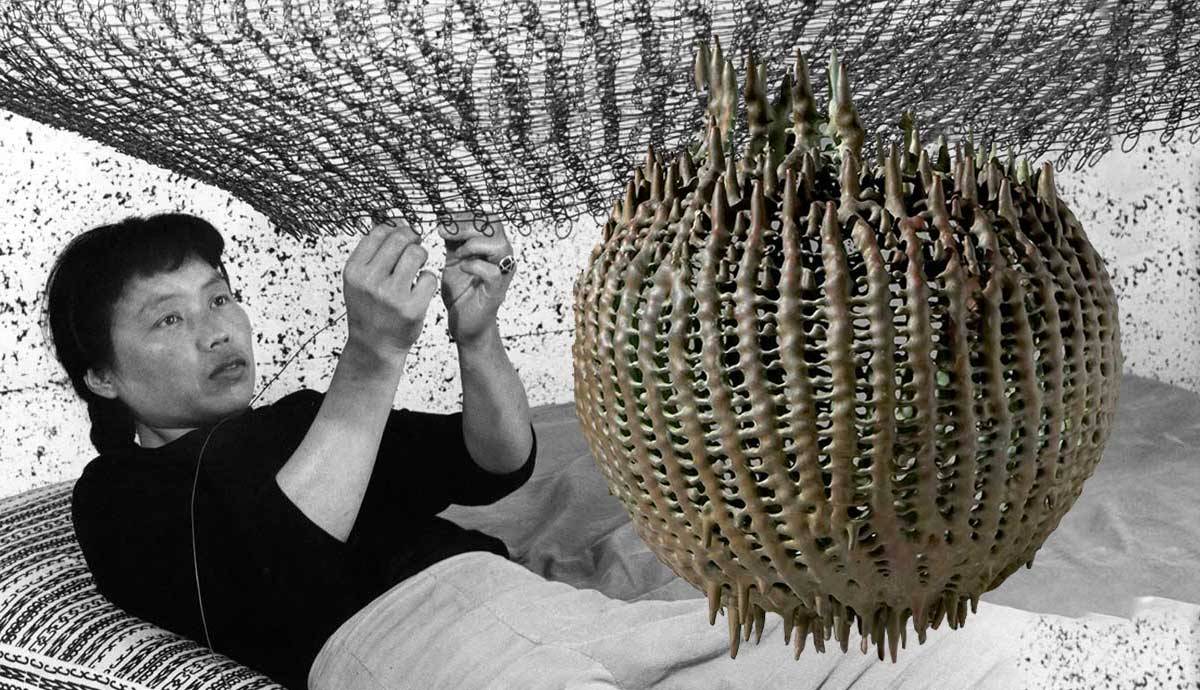 The artist Ruth Asawa was born in 1926 in California. Her parents were immigrants from Japan who worked as truck farmers. While doing tasks at the farm, Asawa would often daydream or draw shapes in the sand with her feet while sitting on the back of a horse-drawn leveler. The artist noticed that the shapes she drew in her childhood were similar to the sculptures she would create years later. Her works were inspired by nature and by the people around her who often supported the creation of her fascinating sculptures. Here is how Asawa created them.

When you look up Ruth Asawa on the internet, the first pictures that come up are of the artist’s looped-wire sculptures. Her works made with wire are what the artist is well-known for. She started to create looped-wire sculptures at the beginning of her career. They have been the subject of several exhibitions since then. Despite the fact that some people from the art world did not accept the sculptures at first, Asawa’s works became increasingly popular after they were featured on the cover of famous magazines such as Vogue in 1953.

One of the reasons for this initial disapproval was that her sculptures looked too much like handicraft which was, and to some extent still is, not considered fine art. Asawa was not bothered by the comparison and said: “Whether it’s a craft or whether it’s art. That is a definition that people put on things.”

The comparison of her work to crafts is quite fitting considering the looped-wire sculpture’s origins. During a trip to Mexico in 1947, Ruth Asawa was fascinated by weaved baskets she discovered. They were used to carry eggs in Toluca, Mexico but Asawa wanted to include the basket’s qualities in her work. She learned the technique from local craftswomen and later incorporated it into the making of her sculptures. Asawa used affordable and easily accessible materials to create her sculptures. Her use of materials was probably influenced by lessons she took at Black Mountain College. Her teacher and well-known artist Josef Albers encouraged his students to use everyday materials to create something that offers a new and different experience. To make the looped-wire sculptures, Asawa manually interlocked the wires made of materials such as brass, copper, aluminum, steel, or iron.

Snowflakes, Trees, or Shrubs: The Creation of the Tied-Wire Sculptures

The story of Asawa’s tied-wire sculptures originates from a desert plant from the Death Valley that the artist got from a friend in 1962. Her friend told her to draw it, but Asawa had difficulty with the task because the plant was so tangled. In order to draw it, the artist constructed it with wire. After modeling the shape of the desert plant, Asawa got the idea to make her first tied-wire sculptures.

While the flat sculptures look like snowflakes or geometrically constructed flowers, the hanging and standing works are reminiscent of trees or shrubs. To create them, Asawa divided a center stem of 200 to 1000 metal wires into bundles which she then subdivided several times into thin and natural-looking branches. With the middle part of the sculpture appearing the thickest and the wires on the outside getting more and more delicate, the pieces seem like a highly realistic depiction of plants such as bonsai trees or tumbleweeds.

Asawa used different metal wires for her tied-wire pieces such as copper, steel, bronze, and iron. Her son Paul Lanier said that to acquire her materials, Asawa would go to “these dark, dusty warehouses where they sold wire, nothing but wire”. The idea to use everyday materials that Asawa learned from Josef Albers is also apparent in one of her standing tied-wire pieces. The naturally oxidized brass wire sculpture Untitled (S. 058) is mounted on a base of driftwood.

Asawa’s electroplated sculptures show the innovative and experimental spirit of her work. The coral-like pieces that look as if they came straight from the bottom of the sea have an interesting backstory. The artist was looking for a way to clean her sculptures since they started to tarnish and oxidize. She contacted several industrial plating companies in San Francisco, but only one company accepted the assignment, or as Asawa put it, they “took pity on me and were willing to try new things.” Together they tried several methods to clean her work and cover it with patinas. One day, when Asawa was at the plating company, she saw copper bars in a plating tank that had formed a crust on the surface. The artist liked the coarse texture and green color covering the metal.

Asawa was so impressed by the unique appearance of the copper bars that she asked someone working at the company to recreate the texture for her tied-wire sculptures. They tried several things and finally found a solution by reversing the electroplating process. Electroplating is usually used to produce a coat with metal. To make her electroplated works, Asawa would create a sculpture out of copper wire. After that, the piece was put in a chemical tank where it would stay for some months until it generated its distinctive texture and color.

The fountain with the title Andrea at Ghirardelli Square portrays a peculiar scene: a mermaid nursing a baby who also appears to be half-fish. The figure is based on the artist’s friend Andrea. Asawa drew her right after she had a baby and was still breastfeeding. At first, Asawa made a cast out of plaster. After that, she covered the model with wax and for the last step, the sculpture was cast into bronze. The casting process was done by a foundry in the industrial section of San Francisco. Asawa’s daughter Aiko Cuneo said that if her mother did not know how to do something she just looked for people who had the skill and could teach her. While Asawa was working on the fountain, she did not only learn a lot about the process of casting, but she also befriended the people working at the foundry.

During her work on the fountain Andrea, Asawa experimented with cast forms. When she needed to create the tail of the mermaid, she made the shape out of wire, dipped the piece in wax, and after that, cast it in bronze. The sculptures all display the organic forms that Asawa’s work is known for. She once said: “I am fascinated by the possibilities of transforming cold metal into shapes that emulate living organic forms.” The artist did not only use wire to create her cast sculptures but also paper, baker’s clay, and persimmon stems.

Inspired by the Art of Paper Folding: The Origami Fountains

The Origami Fountains consist of two bronze fountains located in Japantown, San Francisco. Even though the sculptures are made of bronze, they are inspired by the Japanese paper-folding technique origami. Origami was an important part of Asawa’s life and work. Her involvement with the art form started when she was a child and used to study origami at the Japanese cultural school. Later, Asawa herself taught the technique to school children.

Before the sculpture was welded in steel and cast in bronze, Asawa modeled the sculpture out of paper with the help of her daughters Aiko and Addie. By using paper for the model, Asawa honored the material of an art form that she admired and even taught others during her life. One of those people is Lilli Lanier who is the granddaughter of Asawa. The fountains have a special meaning to her. Lanier and Asawa shared a love for origami and when they went to the origami store in Japantown they would always see the fountains on their way in.

The making of Asawa’s San Francisco Fountain involved many people. She worked on the piece with friends, family, and students of Alvarado Elementary School. Asawa established an arts program at the school and the students made some of the figures for the Fountain. The artist’s dedication to arts activism at public schools is directly related to the material that was used to make the fountain. Asawa often made baker’s clay for her school children since it is easy to make, affordable, and non-toxic. It consists of flour, salt, and water and was used by Asawa to model the fountain. After that, the sculpture was cast in bronze. Despite the fact that the finished fountain consists of bronze, Asawa tried to maintain the qualities of the dough in the final sculpture to make it accessible for everyone.