Get to Know Constantin Brancusi: Patriarch of Modern Sculpture

French-Romanian sculptor Constantin Brancusi was one of the best sculptors of the 20th century. He explored new forms of abstraction in his modernist sculptures. 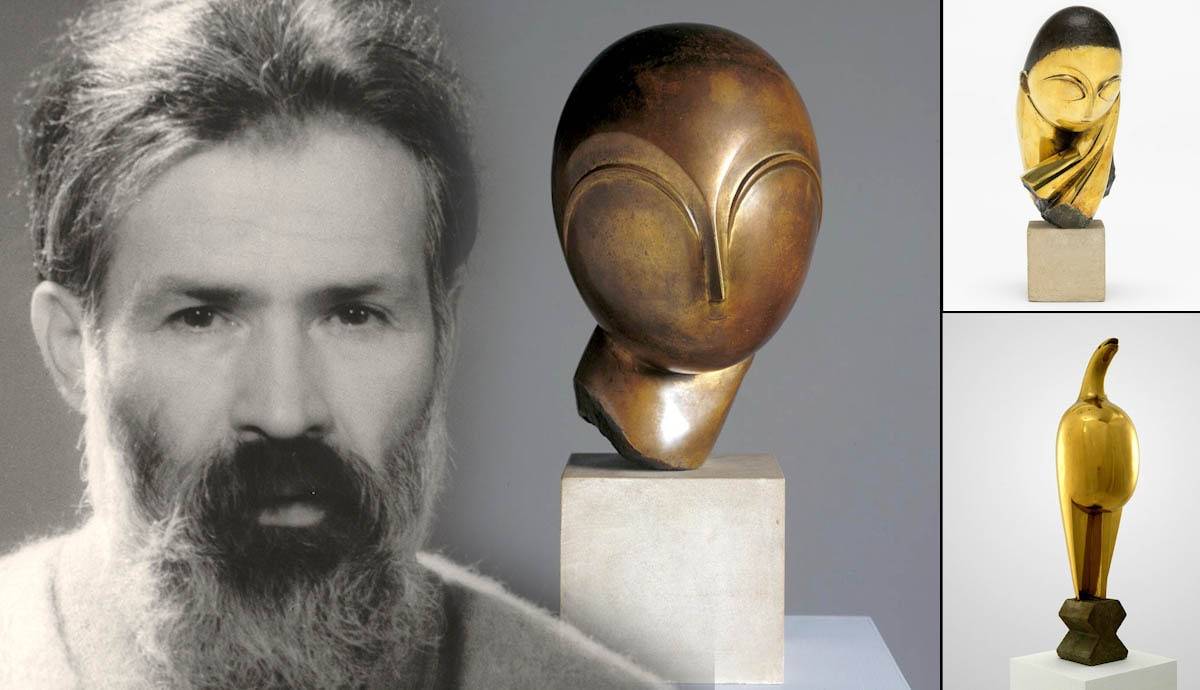 Constantin Brancusi’s style was something completely new in the art world. The art scene needed a revival of sculpture, a liberation from the legacy of the past centuries’ great masters. Brancusi’s decision to leave Rodin’s studio marked the beginning of a new path in his artistic career. The removal of reality and figuration in his work allowed Brancusi to offer a spiritual dimension deeply rooted in Romanian folk culture. Not only did he pioneer a new kind of three-dimensional representation, but he also redefined modernist sculpture.

The Rough Childhood of Constantin Brancusi

Constantin Brancusi was born in the village of Hobita in the western part of Romania on February 19, 1876.  He was the fifth of seven children in a poor peasant family. At the age of seven, he started working as a shepherd in the Carpathian Mountains. He also spent part of his childhood working as an apprentice in various small studios. There, he learned to carve chunks of wood and make utensils and tools.

At the age of eighteen, Brancusi decided to leave the carpentry shop and enroll in the school of Arts and Crafts in Craiova. Later on, he attended the Bucharest School of Fine Arts and graduated five years later. In 1903, Brancusi decided to leave Bucharest and go to Paris. Since he was extremely poor, his trip took quite a long time. His journey lasted for 18 months with longer stops in Vienna and Munich. This experience inspired his later works. Brancusi continued his studies in Paris, at the École Nationale des Beaux-Arts, where he tried to portray the essence of his subjects in order to achieve their true ideal form.

In 1906, Constantin Brancusi had his first solo exhibition. The artist was inspired by Auguste Rodin’s style. A year later he entered Rodin’s studio as an apprentice, but didn’t stay there for long, since he chose to forge his own path. Brancusi moved towards abstraction. In fact, primitivism played a central role in Brancusi’s modern sculptures and his career as an artist. He decided to leave Rodin’s studio because he needed to grow on his own. ”Nothing can grow in the shadow of the great trees,” Brancusi said. His style was differentiated from classical sculpting methods, emphasizing the so-called primitive culture. Shortly after 1907, however, his mature period began. In Paris, he joined the circle of avant-garde artists and became friends with Marcel Duchamp, Fernand Léger, Henri Matisse, Amedeo Modigliani and Henri Rousseau.

Although he entered the world of the Parisian avant-garde, Constantin Brancusi never lost a kind of peasant lifestyle. He remained attached to traditional materials. He was considered an outsider in the art world of Paris since he was a Romanian immigrant too. Unlike classical sculptures which are carved right to the detail to create idealized figures, Brancusi’s modern sculptures concentrate on the essence of the form. His works are characterized by geometric elegance, excellent craftsmanship, and innovative use of various materials, such as wood, marble, steel, and bronze.

In 1908, Constantin Brancusi created one of his most famous modern sculptures, The Kiss. This work marked the end of Rodin’s influence and the beginning of Brancusi’s primitivist phase. In an attempt to retain the materiality of sculpture, Brancusi portrayed the two figures hugging. This modern sculpture is made out of a single piece of limestone.

By placing the figures directly on the ground and not on a base, Brancusi wanted to avoid the sophistication of a higher platform and instead looked for the truth in nature. He tried to move beyond surface appearances in order to capture the essence of the couple’s spirit. The goal of this sculpture was to express the concept of the wholeness of two individual beings that came as one, symbolized by a kiss. There are similar versions of this work in different museums. The idea of union expressed in these two male and female figures coming together has a primitive instinct. It’s simplified geometry, which became the main feature of Brancusi’s work, directly affected his friend, the painter Amedeo Modigliani.

What Was Brancusi Influenced By?

During his stay in Paris, Constantin Brancusi was deeply influenced by African and Native American art. Brancusi may have been inspired by the semi-abstract forms of art that went beyond the Western tradition. He sought to simplify his chosen subjects and tried to find the simplest and most elegant ways to express the essence of his chosen subjects.

The two main sources of inspiration for Brancusi were Romanian folk culture and African art. The first featured woodcarving, which Brancusi incorporated into his sculptures. Romanian folk myths, tales, and archaic symbols also influenced his choice of subjects. As for African art, some of Brancusi’s figurative works share similar features with African figurative sculptures, such as the simplified facial features, the geometric patterns, and the disproportionately long torsos. Another major artistic influence was Rodin’s work. The French master had a profound impact on him. Rodin taught Brancusi how to use materials to bring his subjects to life. He also taught the Romanian sculptor how to work with patience.

One of Romania’s most important public monuments, Constantin Brancusi’s sculpture Endless Column is large-scale. It is 29.35 meters high and it is located in the city of Târgu Jiu. It is a part of a three-sculpture ensemble along with two other monuments called the Gate of the Kiss and Table of Silence. Brancusi completed this artwork on October 27, 1938. He was commissioned to create these public sculptures to commemorate Romanian heroes who lost their lives during World War I. The work can be interpreted in various ways. It concentrates on the whole philosophy of Brancusi. It can be characterized as a stairway to heaven, that unites the earth with the sky. In 1950, during the communist regime in Romania, the government considered Brancusi’s work as “reactionary” and proposed that the monument should be demolished. Eventually, this spiritual public sculpture survived. Some maintenance work was carried out on it from 1998 to 2000, in collaboration with the government, the World Monuments Fund, and the World Bank.

From the 1920s to the 1940s, Constantin Brancusi produced a series of important sculptures, all titled Bird in Space. The bird, and animals in general, represent a common theme in Brancusi’s work. In 1912, Brancusi created his first abstract form of a bird in bronze. A Romanian bird of a folktale, Maiastra, meaning master bird, was the main source of inspiration. Until 1940, Brancusi had completed 28 variations inspired by this first version. Brancusi focused on the movement of the bird, highlighting the elliptical lines that give the essence of fast flight. The fact that he placed the bird on a limestone base showcases his total rejection of Rodin by this stage in his career. In terms of the surface, Brancusi rejected Rodin’s tactile way of working with clay, and the sense of the artist’s touch that his works have.

Photographer Edward Steichen bought one of these works in 1926 and tried to transport it to the United States. However, American officials did not accept the bird as a work of art and imposed high tariffs on its import as an industrial product. Then, Brancusi decided to sue the officials and he finally got justice. The Judge of the case  J. Waite ruled in his favor. Eventually, Constantin Brancusi’s works received a warm response from many collectors in the United States. It was at the time when her was facing harsh criticism in Europe.

The Legacy of Constantin Brancusi

Constantin Brancusi changed the nature of 20th-century modern sculpture. He liberated sculpture from preconceived notions of realism and representation, forming his own language of simplified abstraction. In 1952, Brancusi acquired French citizenship and five years later on March 16, 1957, he passed away. In his will, Brancusi bequeathed his art to the Museum of Modern Art in Paris. He gave the museum more than 80 sculptures, on the condition that his entire workshop was transferred to the museum, in its original form.

Today, Constantin Brancusi’s atelier has been reconstructed in the open space of the Georges Pompidou Center in Paris, and it functions as a museum. Collections of his work are held in the most notable museums in the world, including the Museum of Modern Art in New York, the Philadelphia Museum of Art, Tate Modern in London, and the National Museum in Bucharest.

Auguste Rodin: One of the First Modern Sculptors (Bio & Artworks)

Amedeo Modigliani: 10 Facts About A Scandalous Artist And His Short Life