Characterized chiefly by its church-building, Byzantine architecture developed a variety of structures that represent one of the greatest creative achievements of the Middle Ages. 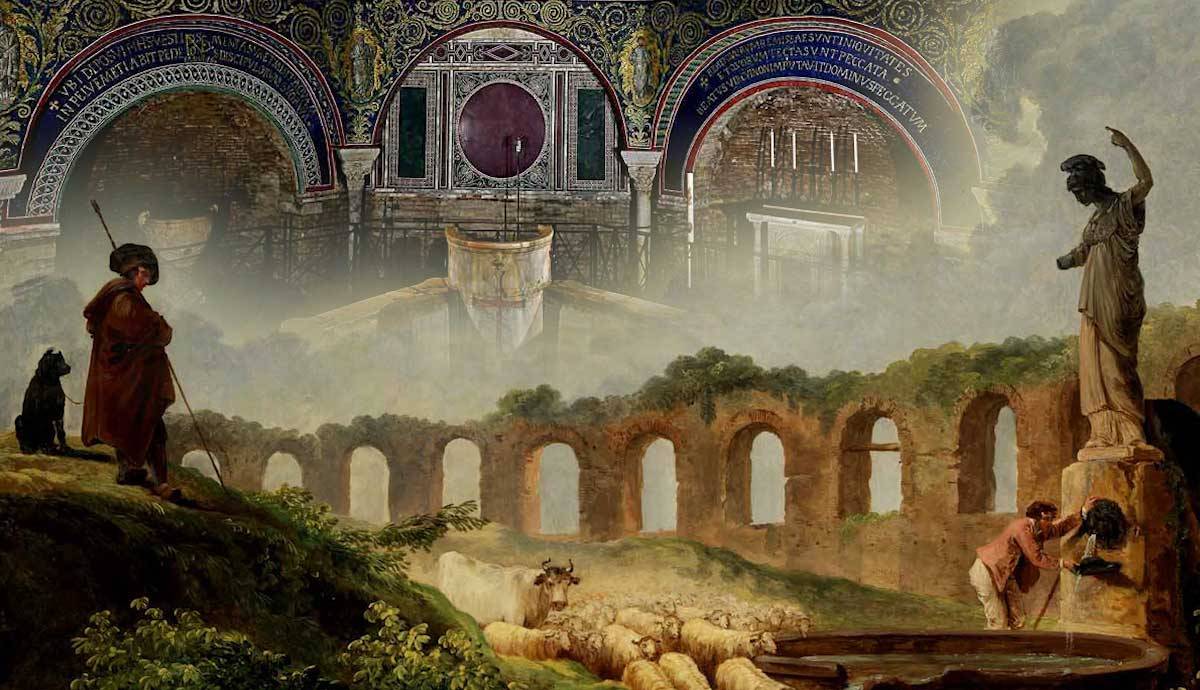 The adoption of Christianity as the Roman Empire’s official religion signaled the beginning of one of the most influential developments in the history of architecture. The emergence of a timber-roofed basilica marks the early development of Byzantine church architecture. This type of church dominated the church construction on the coasts of the eastern Mediterranean from the 4th to the 6th centuries.

Santa Sabina in Rome, built between 422 and 432, is a typical example of this type of church. The sixth century marked the turn towards vaulted churches, peaking with the unprecedented example of Byzantine ingenuity, Hagia Sophia, built between 532 and 537. The so-called Middle Byzantine period marked the diversification of Byzantine church architecture. The development of the theology of images after the Iconoclasm affected the development of a standardized program of decoration and architectural design.

Emerging in the 9th century, the cross-in-square church was commonly used in Greece and Asia Minor for more than five centuries. One of the earliest examples is found at the monastery of Hosios Loukas in Greece, built between 946 and 955. Whatever the type they were, the enormous amount of churches built by Byzantines reflects the central role of the Christian religion in the organization of the Roman state from the 4th century.

No imperial or noble burials have survived intact in Constantinople, but numerous texts testify to the tombs’ impressive dimensions and settings. The most common settings for burial were places either inside or in the vicinity of churches. As was the Byzantine custom, graves and sarcophagi were found in the church’s narthex and annexed chapels. An important early example of the Byzantine funerary architecture of monumental dimensions is the church of Holy Apostles in Constantinople. It was originally made as a resting place of Emperor Constantine, dedicating the center of the church to his tomb. Outside the church, 12 sarcophagi were supposed to house the bodies of all 12 apostles.

Sandwiched between the two older churches of the Pantokrator monastery of Constantinople is the funeral chapel of the imperial Komnenos family. In this two-domed church, the imperial tombs were clustered beneath the western dome. One arcosolium survives in the western wall.  Arcosolii were set aside for distinguished family members, though unclear for whom. The western two may have been intended for the tombs of John II and his wife, Irene. Their son Manuel I was buried here in 1180. Described as a lavish tomb, his grave incorporated an opus sectile floor, the relic of the Stone of the Unction, and a tomb marker of dark stone topped by seven domes.

A martyrium is a centrally planned structure, usually built over the tomb of a Christian martyr.  Martyria had no standard architectural plan and are found in a wide variety of designs, such as circular, polygonal, or cross-shaped. There was often a sunken floor bringing the faithful closer to the remains of the saint. Constantine initiated the construction of monumental buildings in memory of people and events related to Christianity.

The first of Constantine’s monumental martyria is Saint Peter’s Basilica in Rome, built around 324. The focal point of the basilica was a ciborium, beneath which was the tomb of the apostle Peter. Though these buildings played a lesser role in the development of Byzantine architecture, they are important to the development of the cult of relics and the construction of pilgrimage sites.

Similarly, baptisteries are exclusively Christian buildings developed from earlier Roman religious architecture. The baptistery was commonly octagonal in plan and used as a place to administer the sacrament of baptism. It was roofed with a dome, the symbol of the heavenly realm. The baptismal font was usually octagonal as well and encircled by columns and an ambulatory. However, they only represent an example of early Christian and Byzantine architecture since, by the 10th century, they were omitted entirely in some places.

Compared to the number of churches and monasteries that influence architectural styles to this day, profane Byzantine architecture seems to have been pushed aside. Therefore, it must be noted that Byzantines were masters of architectural and urban organization throughout their more than thousand-year history. They built cities, palaces, houses, and public infrastructure, such as aqueducts of massive proportions.

As Byzantine society became more inward-turning, public architecture almost exclusively focused on defensive structures. Periods of ruralization, urban revivals, forming of new towns, reconfiguring ancient cities, and migrations shaped the development of profane architecture. Unfortunately, most of the examples that remain to this day are in ruins. Constant inhabitation and wars after the fall of the Byzantine Empire played a significant role in the disappearance of these structures. Despite this, some samples help reconstruct what had been lost to history.

The Architecture of a Byzantine Palace

Next to nothing is known about the palaces of Byzantine aristocracy, whether in Constantinople or elsewhere. Illuminated manuscripts, literary descriptions, and hints in contemporary writings all provide unreliable information about how a Byzantine palace might have looked.

Considering that the Imperial Palace in Constantinople is almost non-existent, an excellent example of palace-building can be noted in the Peloponnese city of Mystras. Overlooking the square of Ano Chora is the palace complex of Mystra and residency of the city’s governor, and later, of Byzantine despots. This L-shaped building had four construction phases between the 13th and 15th centuries. During the era of emperor Andronikos II, the original Frankish palace was expanded with a two-story construction following Byzantine tradition. The next extension was undertaken in the second half of the 14th century, during the era of the despot Manuel Kantakouzenos.

The last Byzantine building phase included a three-story building combining Western and Byzantine architectural elements. It is attributed to the emperor Manuel II Palaiologos, who stayed in Mystras for long periods between 1408 and 1415. A magnificent throne room was located on the uppermost floor of this extension, with a balcony overlooking the square.

Domestic Byzantine architecture seems to follow old traditions from the beginning of the Roman Empire. The dwellings of the poor, presumably hovels and farmhouses, are unknown. Our knowledge of middle-class dwellings is broader but limited to a handful of residences and commercial buildings excavated in a few Greek cities. A number of 12th-century houses excavated on the Athenian Agora provide us with significant examples. These houses are indistinguishable from the 5th-century houses built on the Agora, as well as the 2nd-century houses in Dura Europos or 1st-century houses in Delos and Priene.

An Athenian city house formed a roughly squared block, with a courtyard in the center as a source of light and air. Simpler homes have been found at Corinth, composed of two or three rectangular rooms. In some instances, more elaborate houses had upper floors, but the main characteristic of these houses are small rooms and poor plan organization.

The fortification of Byzantine cities is best attested in Constantinople’s land walls, built in several different phases. The main wall is four miles long, 30 feet tall, and 16 feet wide. Additionally, it is preceded by another wall and a 60-ft-wide moat. The main wall had 96 towers and six gates used to enter the city. This is perhaps the first time in the Middle Ages that the double enceinte had been used.

In the later Middle Ages, this system of fortifications became a large part of military history in Western Europe. Other examples of Byzantine walls that survive to this day are the Sea walls, the Walls of Blachernai, the Golden Gate, and the so-called Marble Tower. The great building campaigns of fortifications slowed down after the 6th century. On the eastern borders of the Empire, which suffered the heaviest blows in Byzantine history, defensive structures consisted of individual fortresses and small fortified towns.

The Towers of Byzantium

An interesting example of Byzantine fortifications are towers built all over the Empire. Written sources reveal an interesting series of Byzantine defensive structures made up of towers and lined up as a beacon system. This beacon system was used for communication between the eastern border of Asia Minor and Constantinople. These towers communicated with smoke signals, carrying a message from one station to the other.  Based on the sources, carrying the message from the first station to the last took an hour. Sources mention nine stops from the eastern border: Lulon – Mount Argaios – Isamos – Aigilon – Mount Mamas – Mount Kyrizos – Mount Mokilos – Mount Saint Auksentius – Faros.

With the exception of the first and the last station, other stations were on the tops of hills and mountains. Lulon was a significant border fortress in the north of Taurus. The last station was Faros, the lighthouse of Constantinople, named after the Alexandrian lighthouse. Today, only the first two and the last can be located.