5 Reasons You Should Know Alice Neel

Alice Neel’s figurative paintings are raw, unflinching, and sincere. She was also an unofficial archivist of New York City. 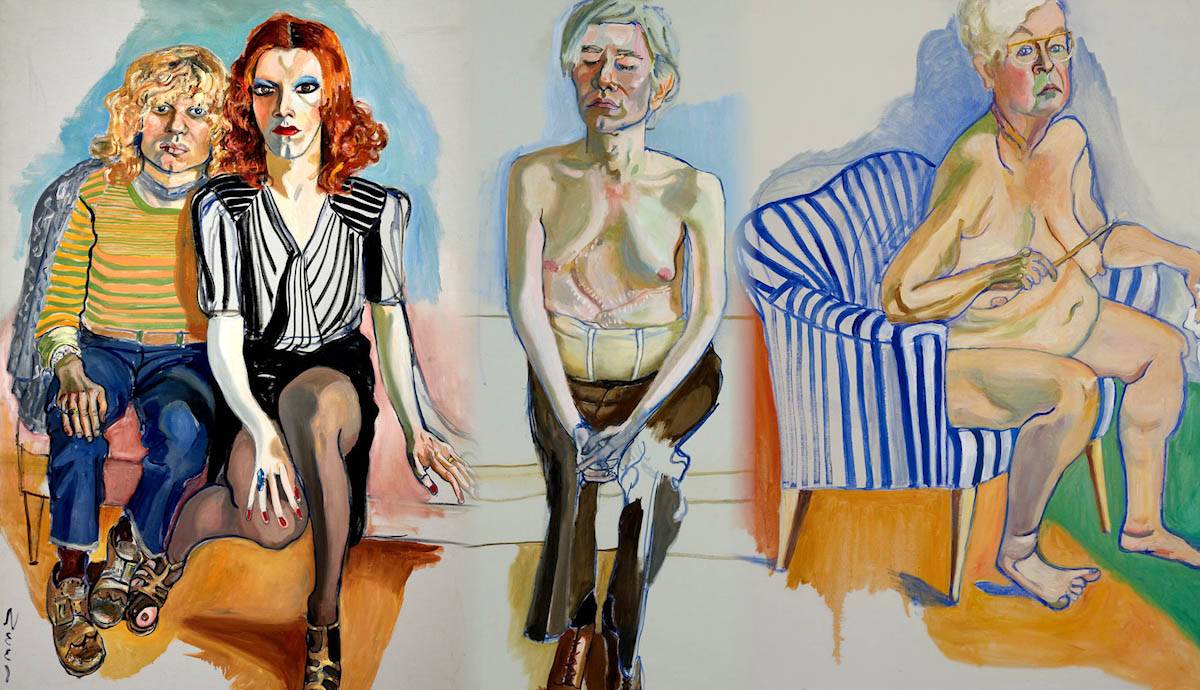 Alice Neel was unafraid to show the people she painted as they really were. Her dominant style was realism while the art world got busy with Pop Art and Minimalism. She wanted to paint striking faces from the neighborhood, including children, pregnant women, and migrants. In this article we examine why Alice Neel is such an important contemporary painter. You will never forget her work!

Who Was Alice Neel?

Alice Neel was born in Pennsylvania in 1900. As a child, Neel was anxious and only felt steady while painting. Her artistic training came from studying at the Philadelphia School of Design for Women in 1921. After her studies, she moved to Greenwich Village in New York. Her hunger for learning didn’t stop there. She became interested in philosophy and studied in the 1940s and 1950s at the Jefferson School for Social Research when she was well into her forties and fifties. Before she was a mega-hit (which came in her later years), Neel lived in near-poverty. Her work was exhibited at the ACA Gallery, her illustrations were contributed to the journal Masses & Mainstream, she adamantly took courses in Marxism. Much of this also occurred whilst she was caring for her children.

Alice Neel went on to paint portraits that matched the likes of Berthe Morisot and Edgar Degas. The contemporary painter’s subjects came from the neighborhoods where she resided or lived close to, like Greenwich Village, Spanish Harlem, and West Harlem. She was married to the Cuban visual artist Carlos Enriquez and had two daughters with him. Neel was radically interested in striving out on her own while the art world was busy with Minimalism, Pop Art, and Abstract Expressionism. Some of her early work was destroyed by a jealous lover, but many of Neel’s realistic portraits remain.

The artist Robert Henri was one of Neel’s early inspirations. She took notes from Henri, who founded the Ashcan School. It was here that she painted the neglected subjects of the previous movement, American Impressionism. Taking notes from Henri, she painted the portraits of bohemians, mothers with their children, activists, and poor people. Her intention was to fight against social discrimination and represent women in realistic settings. She regarded herself as a communist, like so many others in their youth, wanting to challenge a harsh system. A trip in 1926 to poverty-stricken Cuba struck a chord with her, and she joined the Communist Party ten years later.

1. A Visual Artist for the Feminists

For most of her career, Neel painted in obscurity. One critic referred to her paintings as being painted in a man’s style, but Neel dismissed this. In the 1970s, the second-wave feminist movement was rapidly rising, and the problems of the patriarchy were being displayed through critical eyes. Neel was featured in Time magazine with a portrait of the feminist writer Kate Millett. This put Neel on the map in 1970. Quickly, she was discovered and celebrated by many feminists. It made it almost seem as though she was an overnight success. How could they not adore a woman who was painting people as they truly were? She painted several key feminists from this period, like Cindy Nemser, Linda Nochlin, and Irine Peslikis.

2. A Contemporary Painter of City Life

Neel moved to the Upper West Side after spending twenty years in Spanish Harlem. The immigrants and people in poverty were no longer her subjects as those around her were mainly well-off. Young critics began admiring her work, and her financial situation changed for the better. In Carmen and Judy, Neel paints her cleaning lady nursing a disabled child. This is an intimate moment between the sitter and Neel. The visual artist invites the viewer to watch. Without trust from her sitter, the contemporary painter couldn’t have captured this portrait so well.

Alice Neel suffered many heartaches in her life, from the death of her baby daughter Santillana to her dying mother. The contemporary artist suffered a mental breakdown after Santallana died after which she made several attempts to take her own life. Life’s pain was translated onto the canvas. Throughout her career, Neel dealt with her pain through art. The visual artist would go on to paint her dying mother, the psych ward where she recovered from her mental breakdown and her daughter’s death in the painting Futility of Effort (1930).

Then there were the intimate lovers who tried to control her and take art away from her. None was more damaging than Kenneth Doolittle, a one-time lover, who had destroyed a vast number of her paintings. One particular painting that he destroyed was an early portrait of Neel’s daughter Isabetta. The portrait marked the occasion when Isabetta came to the United States from Cuba to visit her mother. She had previously been living with her father since her parents had separated, being raised by his family in Cuba. Neel also survived on public assistance once her employment with the Federal Art Project had ended.

There was that portrait she painted of Andy Warhol after Valerie Solanos, an aspiring writer and radical feminist, shot him. Warhol’s shirtless torso reveals wounds that twist and turn, which are fleshy pink. This portrait, Andy Warhol, was painted two years after the incident. But this jarring portrait breathes light into a version of Andy Warhol that wasn’t easily accessible to the public. The contemporary artist’s portrait of Warhol is raw and unflinching. His scarred body reveals something of the man, the myth, who was so meticulous with his image. It reveals something human, showing the world that Warhol was a real human being and not just a celebrity painter. This could have only been painted by someone who could empathize with her sitters and their pain.

According to Alice Neel, the Communist Party affected her work. At the time, joining the Communist movement could have been a trendy thing to do, a way to show her opinion against capitalism. She joined the Communist Party in 1935. But the contemporary painter remained faithful longer after the movement received its criticism, and members moved on. She was inspired by and painted the portrait of Ella Reeve Bloor, a Communist member whose journalism during the Great Depression shed light on a broken system. The painting, Death of Mother Bloor (1951) shows the woman lying in an open casket, with the words “Communist Party” wrapped around a bouquet of red flowers. Among the members and supporters of Communism, Neel also painted Phillip Bronosky, Mike Gold, Mercedes Arroyo, and Alice Childress.

Besides Communist members, Alice Neel painted, on the other side of the aisle, corporate America. Neel was determined to capture the spirit of her time by showing the rough and gritty edges people fall into. Then there were the corporations who caught the bright young minds, like her son Richard, whom she painted in Richard in the Era of the Corporation (1978-1979). This painting contrasts an earlier portrait, Richard (1962), where the 24-year-old Richard appears handsome in a casual setting. Neel dedicated herself to Communism and she supported the civil rights movement. By painting civil rights leader James Farmer, she made a clear political statement. Farmer worked alongside Martin Luther King Jr to dismantle segregation.

Alice Neel’s last self-portrait would also be her second self-portrait. The painting of this final Self-Portrait began in 1975 but, soon after, Neel abandoned it. It was her son Richard who encouraged her to return to it again. She said of her attempts to paint this portrait: “The reason my cheeks got so pink was that it was so hard for me to paint that I almost killed myself painting it.” (Neel, NPG)

Thankfully, Alice Neel did finish it. The portrait is as strong as any other she painted. Neel sits in her art studio chair, nude, holding a paintbrush. Her unwavering eyes stare down the spectator. She’s as raw as Warhol’s wounds, and she’s confident, brash. The background is blue, yellow and green, and painted in her trademark unfinished style. Sadly, Neel died just four years after finishing this work.