Vincent van Gogh is one of the best-known artists in history. Take a look at the actors who portrayed the Dutch artist in movies and TV shows. 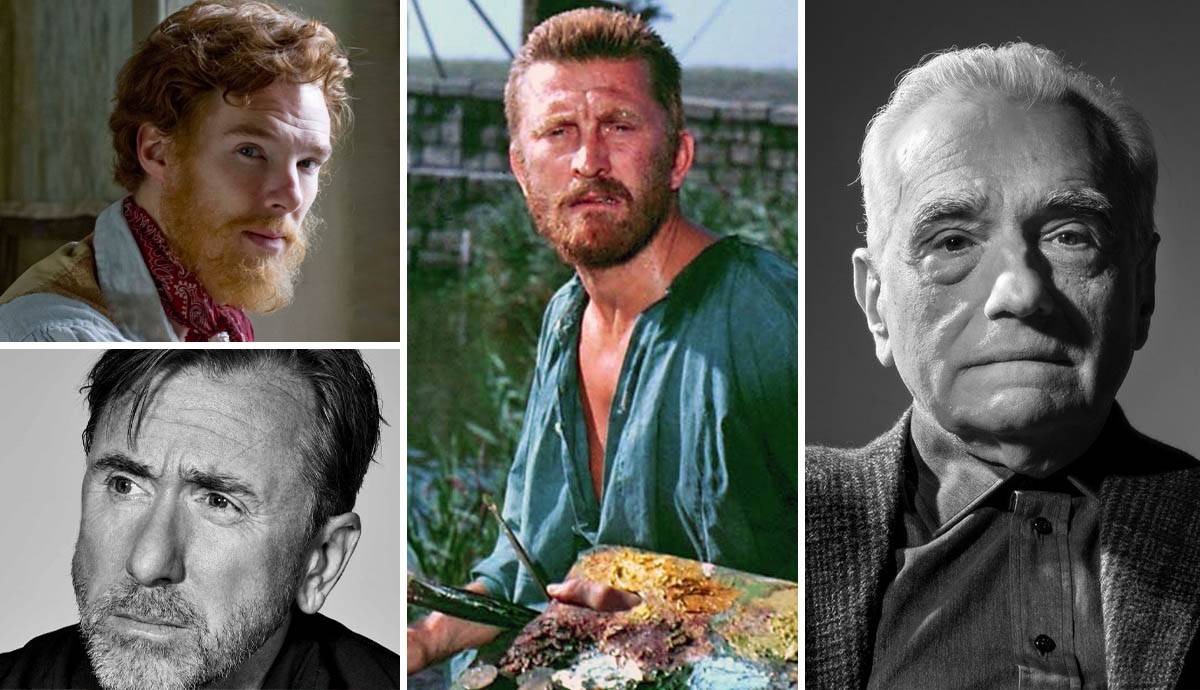 Vincent van Gogh is one of history’s most beloved artists. Thanks to his well-known masterpieces such as Starry Night, Sunflowers, and The Yellow Room, it’s hard to believe that the Dutch artist sold only a couple of paintings during his lifetime. He was a prolific artist who created over 850 paintings and over 1,300 sketches in his unique style. While creating this immense body of work, the Dutch artist suffered through waves of mental illness. His popularity soared after his death and it only continues to strengthen. Van Gogh inspired countless painters, as well as writers, musicians, and filmmakers. From Hollywood and beyond, here are 10 actors who portrayed the famous Dutch artist.

Perhaps the most ambitious of the bunch from our list, Loving Vincent tells the story of Vincent van Gogh in a unique way. You may know the film as the first fully painted feature film. Co-directed by Hugh Welchman and Dorota Kobiela, Loving Vincent is made up of 65,000 paintings created by more than 100 artists. Technically, it looks like it’s animated. The co-director Welchman had been convinced that “people in this media-saturated world like to see something original.”

Loving Vincent explores the last few months of Van Gogh’s life when he succumbed to despair and darkness. It’s a story of Vincent van Gogh told by the people who knew him. The film’s narrative is led by the young Armand Roulin (played by Douglas Booth). The plot follows Armand as he attempts to deliver a letter from his father to Vincent van Gogh, who he is struggling to locate. As he follows the footsteps of Van Gogh, he begins to learn about the troubling last days of Van Gogh’s life.

Released in 2017, Loving Vincent takes historical facts and blends them together with a fictional plot. The actor who portrays the Dutch artist here is called Robert Gulaczyk. The role required Gulaczyk to be filmed in rotoscope, so the artists could use the techniques and medium of oil paint to recreate the footage so that it looked like a Vincent van Gogh painting. The Dutch artist’s presence was shown mostly in flashbacks and the film took six years to make. Now that’s dedication!

The latest in a long list of films about the life of Vincent van Gogh is called At Eternity’s Gate, starring Willem Dafoe. Set in the last two and a half years of Van Gogh’s life, the drama begins with Van Gogh meeting another artist, the painter Paul Gauguin (played by Oscar Isaac). The film was directed by Julian Schnabel who, earlier in his career, directed a film about the life of the artist Jean-Michel Basquiat. Schnabel handles At Eternity’s Gate with dreamlike imagery. The film’s title comes from Van Gogh’s 1890 painting At Eternity’s Gate.

While preparing for the role, Dafoe learned to paint, taking lessons from the artist and director of the movie Julian Schnabel. Like many of us, Dafoe was well aware of Van Gogh’s work. When he was young and performing in theatres in Amsterdam, Dafoe was exposed to Van Gogh’s paintings at the famous Van Gogh Museum.

Starring Kirk Douglas as the intense Dutch artist, Lust for Life follows Vincent van Gogh during the early period of his life. The movie begins by showing Van Gogh as a missionary in his early days and finishes showing the end of his life. Vincente Minnelli’s Lust for Life was authentic in its staging. The film was shot in locations where Van Gogh actually lived and worked. One scene even took place in the field in Auvers-Sur-Oise, where Van Gogh completed his last painting.

Irving Stone’s 1934 novel Lust for Life provided the basis for this film. Of all the Vincent van Gogh films, perhaps it is this one that shaped the general public’s idea of who Vincent van Gogh really was.

Douglas said of portraying the artist that “the painful experience was probing into the soul of a tormented artist.” The actor received praise around the world for his portrayal of the Dutch artist. The role had quite an effect on the actor and his wife commented on how when a day of filming ended, Douglas would still keep reflecting on the famous artist.

The Dutch Artist Was Portrayed by Martin Scorsese in Dreams (1990)

Vincent van Gogh in Doctor Who, (2010) Played by Tony Curran

Vincent van Gogh was once portrayed as a character in the famous TV show Doctor Who in an episode called Vincent and the Doctor. This episode focused on the Dutch artist’s life. In the episode, the artist, played by the Scottish actor Tony Curran, meets the Doctor (Matt Smith) and his companion after they go back in time. The time travel occurs after the Doctor spotted an alien in Vincent van Gogh’s painting The Church at Auvers (1890). The episode was filmed in Croatia and Cardiff.

There’s a sadness to this episode though. The Doctor and his companion bring Vincent into the future, taking him to the Musee D’Orsay in Paris where his works are exhibited. Curran said, “I was pleased that they wanted to go down that path. It was the darker side of him as well as the love that was in his paintings. For him to come back and actually see his work and the emotional toll it takes on him – it’s very powerful.” While this eye-opening trip doesn’t cure Van Gogh of his depression, it does give him a smile, at least for a day.

The famous British actor Benedict Cumberbatch played Van Gogh in a drama-documentary Van Gogh: Painted with Words. The script was written by using Van Gogh’s letters as the main source. The film was directed by Andrew Hutton. Hutton created the story by mixing interviews done with real people, still photos, voice-overs, and on screen narration, and, of course, the filmed dramatic scenes that feature Cumberbatch as the Dutch artist. It’s also good to know that you can watch the entire docu-drama for free on Vimeo.

Alexander Barnett in The Eyes of Van Gogh (2005)

In The Eyes of Van Gogh, we see the Dutch artist while living in an asylum. The film was written and directed by Alexander Barnett who also stars as Vincent van Gogh. Van Gogh once voluntarily entered an asylum in Saint Remy, where he spent twelve months of his life. In this movie, we see the Dutch artist in troubling mental states. The Eyes of Van Gogh may not stand up to the caliber of the rest of the films featured in this list, but it does show Van Gogh in a film filled with melodrama.

Maurice Pialat’s Van Gogh stands out from the other Vincent van Gogh films thanks to its lack of melodramatic narratives. While Dutronc’s portrayal is filled with emotion, it isn’t melodramatic nor does it sensationalize Van Gogh’s troubling mental health. The film focuses on the last three months of Van Gogh’s life. While we do know that this was a turbulent time for the Dutch artist, Dutronc portrays Van Gogh as a real human being and not just an idea of a person that came from other people’s imagination.

Van Gogh was also portrayed by the great British actor Andy Serkis in BBC’s art series called Power of Art. While Serkis is better known for his motion-capture performances, his portrayal of the Dutch artist was indeed beautiful. There is so much to learn about Van Gogh. The films, TV shows and documentaries mentioned in this list could help with finding out more about the famous artist. There have been countless portrayals of Vincent van Gogh in film and television and we can safely say that there are even more to come. This can only be a testament to the work of the great Dutch artist.