HomeArtHow Mental Illness Shaped the Works of These 5 Artists

The link between art and mental health problems is a popular topic of discussion. The individual circumstances of artists suffering from and being influenced by psychological disorders vary. 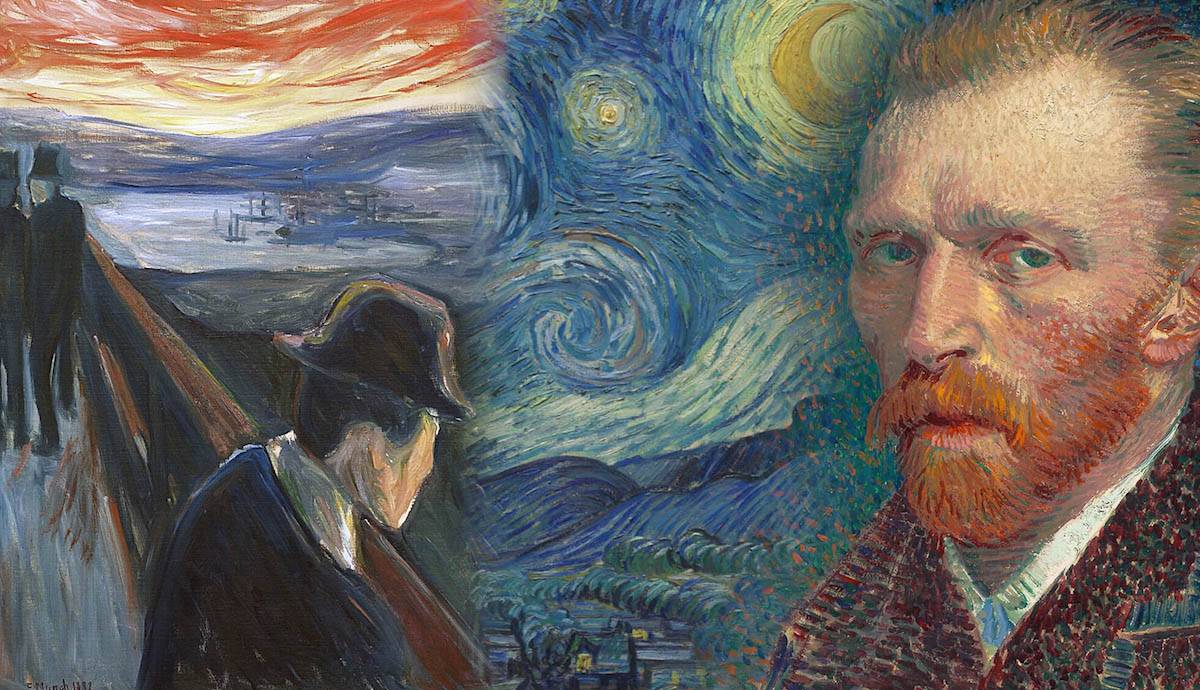 Even though it is difficult to prove a definite link between art and mental health, it is not unlikely that psychological disorders can – like any other state of mind – shape individuals and their creative work. Artists like Francisco de Goya, Vincent van Gogh, Edvard Munch, Frida Kahlo, and Mark Rothko likely suffered from mental health problems at some point in their lives. Their art uniquely reflects their struggle and psychological condition. This article examines how mental health problems could have influenced the works of these five great artists.

The Spanish artist Francisco de Goya was born in the year 1746 and died in 1828. He began his training as a painter when he was 13 or 14 years old and worked as a court painter for the Spanish royal family later in life. His album ‘Los Caprichos’ – a series of 80 prints from the year 1799 that critically comment on the political and social situation at the time – was an independent artwork and not commissioned by the royal family. The first picture of the series shows a self-portrait of the artist.

Francisco de Goya became deaf in the year 1792 due to a severe illness that was never diagnosed. His disease caused him to temporarily experience hallucinations, visual impairment, confusion, and partial paralysis. There are many theories about the illness that Francisco de Goya could have suffered from but there is still no consensus on a specific diagnosis. Researchers consider lead poisoning, syphilis, malaria, typhoid fever, and meningitis as possible diseases.

Francisco de Goya: The Artist and His Mental Health Struggles

The severity of his illness and the possible lead poisoning could have caused Francisco de Goya to develop mental health problems such as depression, mood swings, and hallucinations. His art was a way to cope with his suffering and Goya wrote in a letter that the creation of paintings like Yard with Lunatics, 1793-4, helped him occupy his “imagination, mortified in consideration of my ills.”

The style of Francisco de Goya’s artworks changed after he became deaf and can be interpreted as influenced by his mental health problems. Instead of bright colors and pleasant themes, he displayed darker and often disturbing images. The artist’s plates from the series ‘Los Caprichos’ are a vivid example of this change. How they pluck her!, 1799, shows the unsettling image of three men standing over a female creature with wings while one man seems to violently bite into her right wing.

Vincent van Gogh was born in the year 1853 and died in 1890. The Dutch painter began his career as an artist when he was already 27 years old. Despite the fact that Van Gogh only painted for ten years – from 1880 to his death in 1890 – he left an astounding number of artworks behind. He voluntarily entered the Saint-Paul-de-Mausole asylum in 1889 due to mental health problems and produced several artworks while he was staying in the facility. The Starry Night, 1887, one of his most famous artworks, was inspired by a landscape situated near the asylum.

A group of experts met in the year 2016 for a symposium that was organized by the Vincent van Gogh Museum in Amsterdam to discuss the illnesses the artist could have suffered from. They concluded that Vincent van Gogh probably had bipolar disorder, borderline personality disorder, alcohol use disorder, and he suffered from psychotic episodes. Van Gogh also had a very unbalanced diet and drank lots of alcohol which could have made his condition worse.

One obvious way of how Van Gogh’s mental health problems influenced his art is the depiction of various subjects and landscapes of Saint-Rémy. The artist incorporated these in his work due to his stay at the asylum. The professor of psychiatry and behavioral science at the Johns Hopkins University James C. Harris wrote several essays about the connection between art and mental illness.

According to James C. Harris, The Starry Night could be a depiction of how Van Gogh’s condition stabilized when he was at the asylum. Harris wrote: “The cloudlike images in the center of the sky assume the archetypal form of a mandala, a symmetrical form that frequently emerges as psychological conflicts come into balance.“ (Harris, 2002). The dark cypress, though, could indicate the approaching emergence of psychological problems, since the cypress is a symbol of death in the area that Van Gogh was staying at the time.

The Norwegian artist Edvard Munch was born in the year 1863 and died in 1944. His childhood was shaped by loss, health problems, and an overly strict and religious father. This helped Munch develop anxious thoughts and an intense fear of death and hell.

One famous quote of the artist expresses the struggles induced by his upbringing:

“From the moment of my birth, the angels of anxiety, worry, and death stood at my side, followed me out when I played, followed me in the sun of springtime and in the glories of summer. They stood at my side in the evening when I closed my eyes, and intimidated me with death, hell, and eternal damnation. And I would often wake up at night and stare widely into the room: Am I in hell?”

Edvard Munch is known for incorporating his emotions and psychological states into his paintings. The depiction of mental states is apparent in many of Edvard Munch’s artworks such as Melancholy, 1892, or Despair, 1892. Both paintings show an isolated man seemingly buried in thoughts while looking down. The paintings were created following the death of Munch’s father. Due to the death of his father, the artist’s emotional state became worse and he started consuming even more alcohol.

Despite the fact that Edvard Munch suffered from depression, anxiety, and probably schizophrenia, he refused treatment for some time. He stated: “My sufferings are part of myself and my art. They are indistinguishable from me, and their destruction would destroy my art. I want to keep those sufferings […]“ Eventually, Edvard Munch was committed to sanatoriums several times in the years from 1905 to 1909. After his stay at these institutions, his mental health improved significantly. Because of this, Munch’s art changed. His paintings started looking brighter and less gloomy since he felt better and mentally more stable.

The Mexican artist Frida Kahlo was born in 1907 and died in 1954. Her art is known for depicting difficult themes such as loss, pain, and traumatic experiences. When Kahlo was six years old, she was diagnosed with polio. At the age of 18, the artist was severely injured in a bus accident. She suffered her whole life from pain due to her injuries.

Kahlo’s emotionally intense marriage to Diego Rivera led her to develop depression and even to attempt suicide. Despite, or maybe because of, her various sufferings, Kahlo was very strong-minded. Experts believe that Frida Kahlo suffered from more than one mental health problem, such as post-traumatic stress disorder and bipolar disorder.

Kahlo’s Self-Portrait with Cropped Hair, 1940 is an exemplary depiction of her individuality, her pain, and her simultaneous strength. Kahlo portrays herself wearing a masculine suit, with scissors in her hand, and her hair cut off. The loose hair is lying around her on the floor. The writing on the top of the painting refers to a well-known Mexican song and can be translated as: “Look, if I loved you it was because of your hair. Now that you are without hair, I don’t love you anymore.”

The painting was created after her divorce from Diego Rivera in 1939. Self-Portrait with Cropped Hair, 1940, can therefore be interpreted as a depiction of the painfulness and sometimes even depression that Kahlo felt due to her relationship with Rivera. She nevertheless painted herself as a strong and independent person. Kahlo emphasized characteristics typically considered masculine by portraying herself dressed in a suit and wearing short hair.

Mark Rothko was born in 1903. With his large paintings characterized by the flat and expressive use of color, Rothko was one of the pioneers of Color Field painting. His artworks are supposed to connect with the viewer on a deeper level by displaying feelings that are fundamental to the human psyche.

Mark Rothko got diagnosed with an aneurysm in 1968 and his physician ordered him to live a healthier life. However, the artist continued drinking and smoking. He additionally suffered from anxiety and depression. He died of suicide in the year 1970.

Mark Rothko’s pictures of the Black on Grey series were painted during the time before his death. Some have interpreted these dark paintings as depictions of Mark Rothko’s depression and as indications of his death by suicide. However, there are people who don’t believe that the series is an expression of the artist’s declining mental health. Mark Rothko himself stated that the series thematizes death. The series is definitely different from Rothko’s earlier, more colorful, artworks. This could push people towards finding a connection between the series and Rothko’s mental health problems.