The Circassian Beauties were one of P.T. Barnum’s most captivating hoaxes. Furnished with exotic names, scandalous backstories, and voluminous hairstyles, these women offered a glimpse into an imagined Circassia. 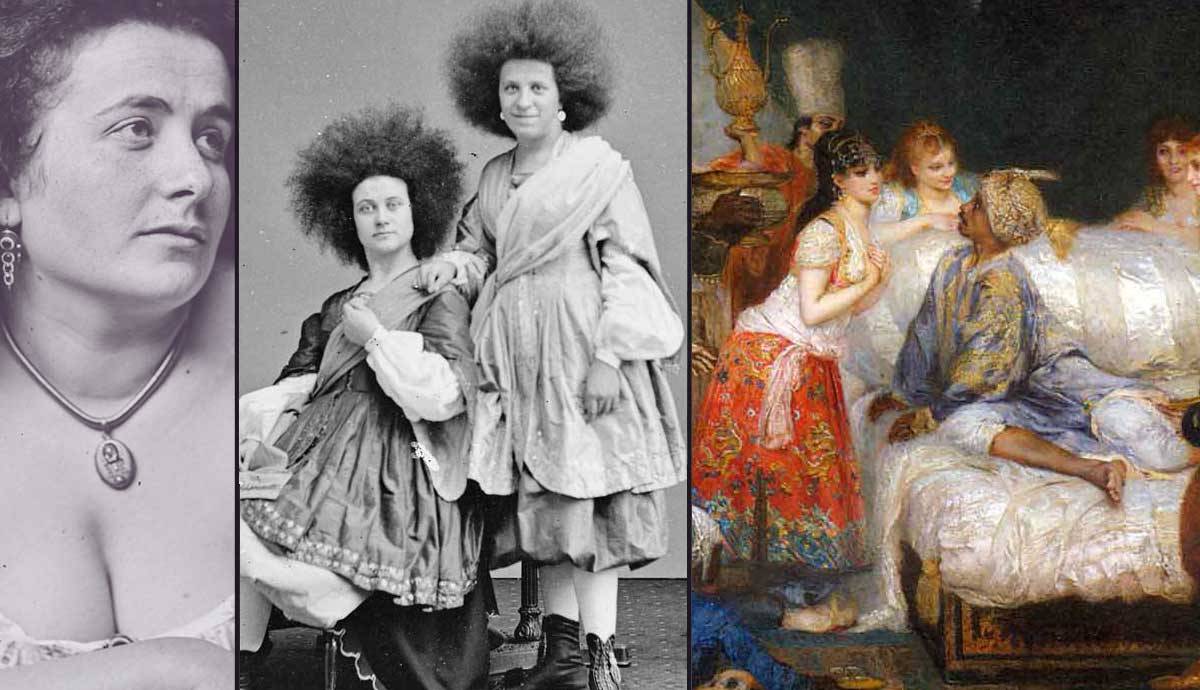 The homeland of the famed Circassian beauties has been the stuff of legend in the Western mind for at least three centuries. The cradle of the so-called “Caucasian race”, Circassia has occupied the imaginations, writings, and performances of some of the most celebrated philosophers, scientists, and authors.

While these scholars waxed lofty ideas about the origin of the region and the beauty of its residents, others sought to bring these notions to more common audiences. PT Barnum, the famous 19th-century circus impresario did just that when he introduced one of his most iconic faces to the American public: The Circassian beauty.

Where is Circassia? Land of the Circassian Beauties

Though never a vast nation, the Circassian people did once occupy a desirable stretch of land, which was fertile, arable, and had access to both the mountains and the sea. The Circassian civilization spanned the area from the Black Sea’s eastern coast to the northern border of present-day Georgia. The River Kuban separated Circassia from the Russian Empire to the north and east, while the southern boundary roughly followed the Bzip River.

The Circassian capital alternated between the Black Sea cities of Bighurquale (today Anapa) and Shache (today Sochi). Both are comparatively small cities, though sports fans around the world came to know Sochi as the host city of the 2014 Winter Olympic Games. Today, Circassia has been fractured into various smaller districts of the Russian Federation. These include Adygea, Kabardino-Balkaria, Karachay-Cherkessia, and parts of the Krasnodar and Stavropol Krais. Circassia also included portions of Ossetia and Abkhazia, two states that most recently attracted international attention during the Russo-Georgian war in 2008.

Like many states in the Caucasus region, Circassia was under near constant threat of invasion, most notably by the Russian Empire. In fact, the Russo-Circassian war lasted over 100 years, finally ending in 1864. The war decimated the Circassian population, with most estimates placing the population reduction at well over 80%. This was accomplished by mass relocation to Turkic lands and by mass executions. Although some fringe historical sources deny the Circassian Genocide, it is a well-documented historical tragedy. Unfortunately, in terms of political recognition, the killings are acknowledged only by the country of Georgia.

The Legend of the Circassian Beauties

Western visitors to the Caucasus mountains have long idolized the beauty of the area’s residents. Circassian women garnered the most attention, heralded by travelers such as Florence Nightingale as “the most graceful and the most sensual-looking creatures I ever saw.” American statesman Bernard Taylor similarly remarked, “So far as female beauty is concerned, the Circassian women have no superiors. They have preserved in their mountain home the purity of the Grecian models, and still display the perfect physical loveliness, whose type has descended to us in the Venus de’ Medici.” The association with Greece was further echoed by Semyon Bronevskii, who praised Circassian women for their light skin, dark hair, dark eyes and “the lineaments of the face of the Ancient Greek.”

Though perhaps intended to be appreciative, even complimentary to the women (and men) of the region, commentary like this would take the perhaps inevitable route to objectification and sexualization. Many salacious details regarding their states of captivity and sexual promiscuity would also enter the public conversation. The philosopher Voltaire demonstrated this when he remarked that:

“The Circassians are poor, and their daughters are beautiful, and indeed it is in them they chiefly trade. They furnish with those beauties the seraglio of the Turkish Sultan, of the Persian Sophy, and of all of those who are wealthy enough to purchase and maintain such precious merchandise. These maidens are very honorably and virtuously instructed how to fondle and caress men; are taught dances of a very polite and effeminate kind; and how to heighten by the most voluptuous artifices the pleasures of their disdainful masters for whom they are designed.”

In song and painting, depictions of Caucasus women would occupy a space somewhere along a pendulum that swung from chaste to seductive. Even Wolfgang Amadeus Mozart would adopt these ideas in his opera The Abduction from the Seraglio, which depicted fair maidens in captivity to an Ottoman Pasha.

It was likely depictions and stories like these that piqued American P. T. Barnum’s interest in the women of Circassia. After all, they displayed all of the desirable elements that audiences sought from one of Barnum’s living exhibitions — exotic origins, unusual anatomy, sexually suggestive backstories, and, of course, an uncanny beauty. With some finessing (and a great deal of fabricating), Barnum brought this fiction to life in his American Museum.

Barnum’s Circassian Beauties bore little resemblance to the typical women of the Caucasus. Upon meeting a Circassian beauty, perhaps at Barnum’s American Museum, perhaps elsewhere, a visitor would be filled in on her scandalous origins. Usually, it was said that the girl (often bearing a name that started with a “Z” that bore no resemblance to any actual Circassian name) had escaped or been purchased from a harem and that she knew little of life outside of sexual servitude before her acquisition.

She would furnish a story from her former life, usually one that featured a clever reason why she had forgotten her native language and spoke English so well. Of course, the real reason for her fluency was that she was most likely an American woman from New York in need of work. This was a cost-effective workaround, since importing real women from the North Caucasus was an insurmountable challenge.

The performers were generally styled with Eurasian-inspired costumes, often embroidered with silk. This often included an Ottoman-inspired sash or pair of harem pants and minimal jewelry. The crowning trait of a Circassian beauty, however, was her hair. Frizzy and puffy like a coarse dandelion, the Circassian beauty’s hair was as fabricated as the rest of her character. Washing it with beer and a long teasing ritual seemed to do the trick.

It’s unclear as to why Barnum suggested this particular hairstyle, as there is no record of hair like this in literary or artistic depictions of Circassian women before their sideshow debut. It could be that the hair mimicked a distinctive type of hat commonly found in the Caucasus mountains known as a papakha. This hat, worn almost exclusively by men, has been conjectured (but nowhere confirmed) to account for the now iconic manes sported by the Circassian beauties.

The acquisition of actual Circassians proved too challenging for Barnum. A letter to his colleague, John Greenwood, suggests that Barnum was initially determined to find a beautiful girl from the region, purchase her, and add her to his touring menagerie of animals, artifacts, and human oddities. He writes,

“I still have faith in a beautiful Circassian girl if you can get one very beautiful. But if they ask $4000 each, probably one would be better than two, for $8000 in gold is worth about $14,500 in U.S. currency. So one of the most beautiful would do, but be sure & get a decent-looking chap of 16 years old or more. If you can also buy a beautiful Circassian woman for $2000, do so if you think best; or if you can hire one or two at reasonable prices, do so if you think they are pretty and will pass for Circassian slaves. But in any event have one or two of the most beautiful girls you can find, even if they cost $4000 or $5000 in gold.”

Barnum’s interest remains coldly commercial for the duration of the letter, pointing out that her level of attractiveness is paramount to obtaining a return on the investment. Additionally, the letter indicates that her slave status may be a potential issue for the impresarios, as they plan to take her through Europe. He states:

“But of course one or two additional girls will help… especially if one can pass for a Grecian. But after looking the thing over, if you don’t find one that is beautiful and possesses a striking kind of beauty… you must give it up…and not get them, for there is nothing in her to attract and fascinate, and the papers would cry her down and it would prove a loss. But if she is beautiful, then she may take in Paris or in London or probably both. But look out that in Paris they don’t try the law and set her free…”

Slavery was a particularly hot topic in the United States at the time, with the American Civil War drawing attention to multiple arguments on human freedom and sovereignty. Seeing women who had come from captivity, especially white women, was sure to raise interest, debate, and ticket sales. Taking advantage of the zeitgeist proved to be profitable for Barnum, and eventually, Circassian Beauties (and other racially-charged exhibitions) were a staple of the American sideshow, appearing in circuses and menageries all across the country.

The Legacy of the Circassian Beauties

As the sideshow bowed to newer forms of entertainment such as film and television, the demand for human acts found itself in decline. There has been some revival of the art form and a few museums dedicated to the topic, though it has not again reached the heights it once did. The Circassian beauty would eventually become a victim of this cultural shift. Though some forms of performance from this era are revived on occasion, the Circassian beauty is unlikely to be among them. Increasing globalization, education, and travel make a hoax like this impossible to execute with the same success that Barnum did. She lives on, however, in other crucial conversations happening in performance spaces today. High-profile dialogues about minority representation in theater spaces, the performance of race, and the treatment of women in film and theater all echo the peculiar case of the Circassian beauties. 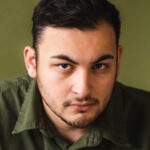 By Daniel MestaMA Candidate, BA Theatre Arts, Russian Studies Daniel Mesta is a curator, creator and communicator who consults for libraries, theaters and museums. He specializes in the history of theater, opera and circus. He earned his BA in Theater Arts and Russian Studies from Brigham Young University, and is completing his MA in International Relations at the European University at St. Petersburg, Russia.