Does Frege’s approach to language and meaning place a barrier of subjectivity between us and external reality? 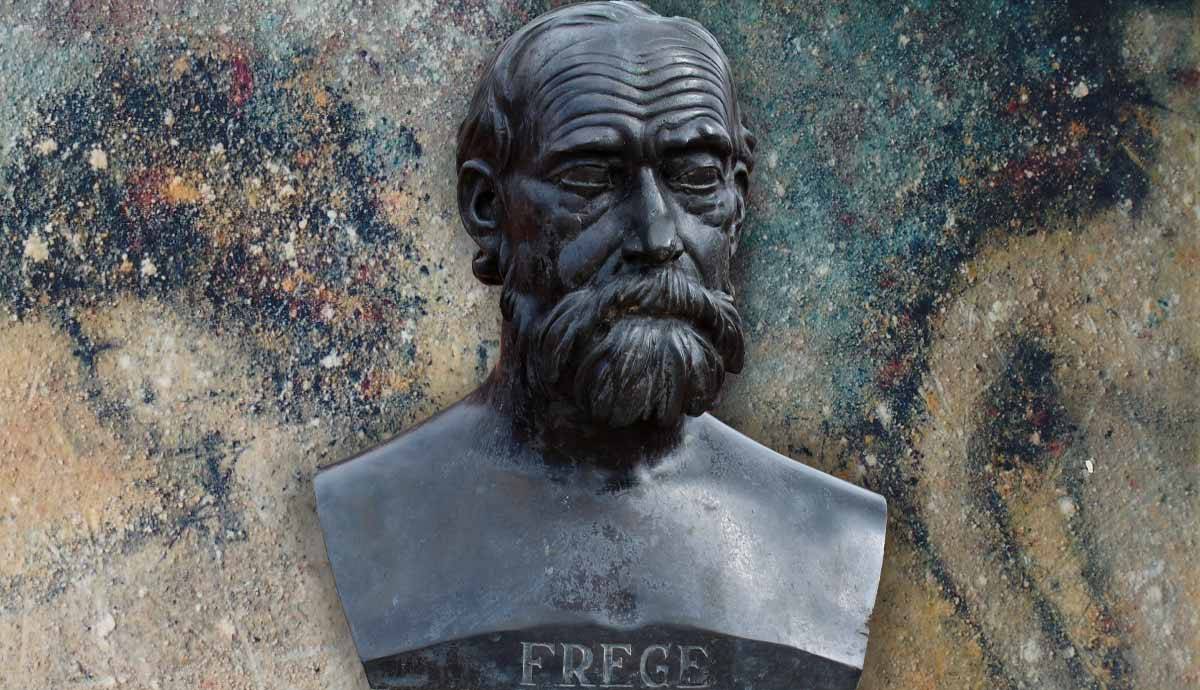 Frege’s attempt to underpin all of mathematics using logic led him to investigate language. This introduced a problem – the problem of preserving the possibility of objective knowledge within Frege’s system.

Although Frege’s influence on both mathematics and philosophy has been profound, during his lifetime Frege’s work was little appreciated. The main exception to this was his correspondence with Bertrand Russell and apparent influence on a young Ludwig Wittgenstein. Since his death, Frege has come to be seen as the founder of what is known as ‘analytic philosophy’, which is the dominant variety practiced in English speaking universities and is often defined by the extraordinary emphasis it places on the philosophy of language.

Frege was not a linguist, or even a ‘philosopher of language’ on his own conception. He was, first and foremost, a mathematician, and his philosophy of language was developed in service of his work on logic.

Logic is a discipline undertaken both by people who consider themselves mathematicians and by people who consider themselves philosophers. It will serve us well to distinguish certain elements or aspects of logic from one another, in order to explain why this is. There is an element of logic which is thoroughly informal, and inevitably part of any philosophical enquiry. This we can call ‘logical consequence’, which is the matter of determining which arguments follow from which premises.

This is one instance of a more general kind of logic: that is, to articulate the relationship between different sentences, when and under what conditions certain sentences can or cannot follow from certain other sentences, and so forth. The former, simpler task is that which the earliest systems of logic (those of Ancient Greece medieval Europe and of India) attempted to fulfill.

Modern logic, in contrast, is defined by its ability to give a much fuller account of a much wider range of sentences, and so represents an approach to the latter kind of logic. It is in modern logic also that we can begin to speak of mathematical logic; that is, the application of mathematical techniques to solving problems of logic.

One of Frege’s great achievements was developing logic such that this became possible. Indeed, it was his great ambition to develop a system of logic which could underpin all of mathematics, in the sense that all of mathematics could be derived from this system. This theory, known as ‘logicism’, and Frege’s attempt to demonstrate it are now known to be a failure, albeit a glorious one.

The Relationship Between Logic and Language

Given the description of logic given above, it should be obvious that logic and language are intractably related to one another, and that the study of one will, soon enough, involve a treatment of the other, if it is a full account which we are after.

If Frege’s project was to show that all of mathematics could be underpinned by a set of logical axioms from which everything else could follow, then Frege’s first task was devising a formal system by which mathematical proofs could be executed. More specifically, he wanted an absolute guarantee against incorrect argumentation, both in the sense that it is free of error and in the sense that it has only limited currency, within a certain set of assumptions.

What Frege needed was a formalized language, and the first step towards the creation of such a language was to give an analysis of the structures of natural languages. A natural language is one like English or Italian, i.e one that people actually speak.

“Sinn” and “Bedeutung”: Sense and Reference

In undertaking this analysis, Frege feels that he must draw a distinction between Sinn (the German word for sense) and Bedeutung (variously translated as ‘meaning’ or ‘reference’) in the functioning of natural languages.

A name’s Bedeutung is what it is used to refer to. For instance, the Bedeutung of the ‘number of players on an association football pitch’ is ‘11’. To know a name’s Bedeutung it isn’t sufficient for me to say that I understand that name: I might understand two different things independently without knowing that they share Bedeutung. For example, “Superman” and “Clark Kent” share a Bedeutung, but a person could know how to use both of these words without knowing that they refer to one and the same man (if he existed).

This dichotomy between Sinn and Bedeutung, between sense and reference, is then extended to other types of linguistic expression. If this seems strange or inadmissible, consider Adrian Moore’s explanation:

“It is admittedly strained to say, of some of these, that they are used to ‘refer’ to anything. It is even strained to suggest that they have extralinguistic correlates. (Consider a connective like ‘unless’.) Still, each of them does have a feature that is directly relevant to the truth or falsity of any declarative sentence in which it occurs”.

From this, an account of the sense and Bedeutung in the context of whole sentences can be derived:

“in the case of a full declarative sentence what this amounts to is the following: its Bedeutung is its truth value (truth or falsity as the case may be), and its sense is the thought it expresses (that things are such and such a way, the way they have to be for the sentence to be true).”

Between Us and the World

One concern with this conception of sense and reference is that it might appear to imply a veil of sense which lies between us and referents; that is, between us and things. If senses determine the mode of presentation of things to us, how confident can we be that these senses are representing the world without distortion? Are senses structured by the world, or by our own ability to understand it?

Part of the difficulty of answering this question relates to another potential concern with Frege’s theory: that although it is great at accounting for the clearer kinds of sentences which occur in language, it has a great deal of difficulty in accounting for opacity and ambiguity, which are also ubiquitous features of language.

Colin McGinn offers the following analysis of the opacity problem:

“Although words in opaque context all have references, we may wonder whether or not they all have distinct senses. The sense of the name “Hesperus” in an ordinary context cannot be the sense of the name “Hesperus” in an opaque context. Otherwise, the sense would be identical to the reference, since the reference now is its ordinary sense. To solve this problem, Frege proposes that there must also be an indirect sense. Now, in addition to every name having two references depending on the context, it also has two senses. The name has its ordinary sense and also the sense it has when it occurs in an opaque context.”

Frege on the Laws of Thought

Frege’s response to these problems isn’t to deny the primacy of thought over claims to access reality directly. Indeed, he is quite explicit that he thinks that although “Logic has much the same relation to truth as physics has to weight or heat…. [It] falls to logic to discern the laws of truth”. From said laws “the laws of truth there follow prescriptions about asserting, thinking, judging, inferring”.

So, Frege acknowledges, we might think, that logic draws together the laws of truth with what he calls the ‘laws of thought’. Yet Frege goes on to claim that, “People may very well interpret the expression ‘law of thought’ by analogy with ‘law of nature’ and then have in mind general features of thinking as a mental occurrence. A law of thought in this sense would be a psychological law…. That would be misunderstanding the task of logic…. I assign to logic the task of discovering the laws of truth, not the [descriptive] laws of taking things to be true or of thinking [as a mental occurrence]”

Frege’s point is not that logic is concerned with thought, as defined against a concern with reality. Rather, as Adrian Moore puts it, “The realm of sense, which is set over against the realm of ‘actual’ things in space and time, has its own laws, then, and occurrences in our mind had better conform to those laws if they are properly to count as thinking, if we are properly to make sense of things.”

Moore then draws an analogy between Frege’s view, and a famous tenet of Hegelian philosophy: namely, that the rational is actual and the actual is rational. At one point, Frege responds to this challenge quite straightforwardly: “What are things independent of reason? To answer that would be as much to judge without judging.”