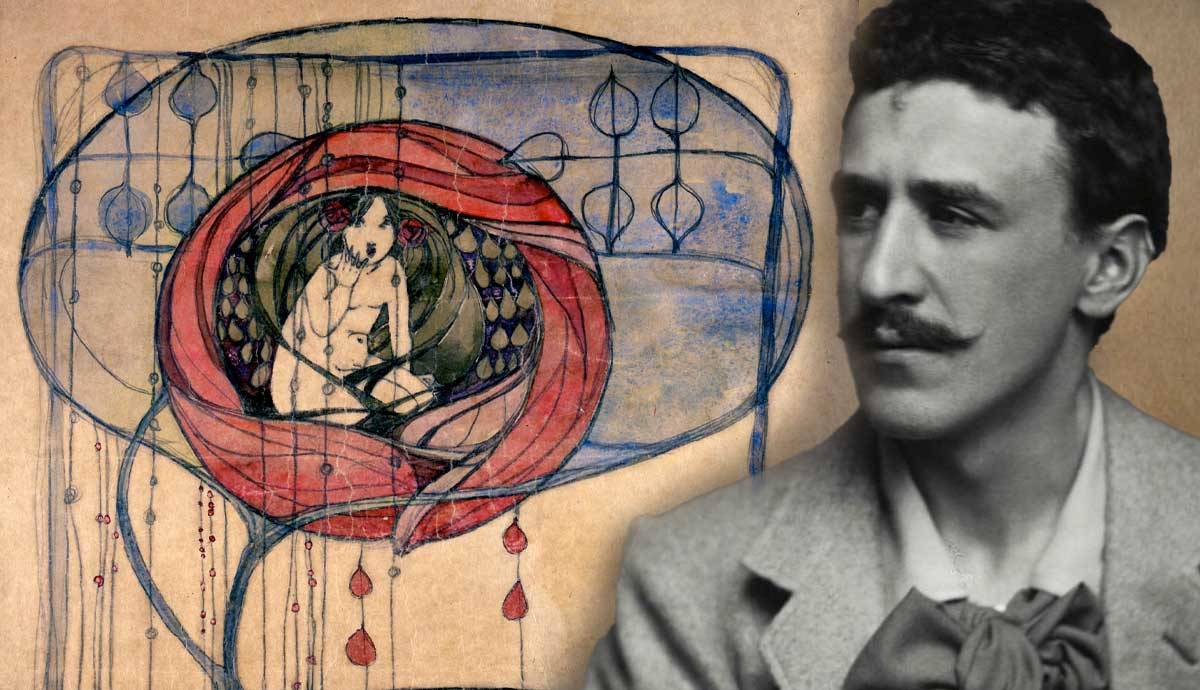 At the turn of the 20th century, Glasgow, Scotland became the unexpected epicenter of an artistic revival that would soon sweep the European continent. Charles Rennie Mackintosh and his group of artists called ‘The Four’ defined the Glasgow School style—the United Kingdom’s answer to the international Art Nouveau craze. Read on to explore how Charles Rennie Mackintosh invented what would become a world-famous aesthetic.

Who Was Charles Rennie Mackintosh?

A Glasgow native, Charles Rennie Mackintosh (1868-1928) is remembered as Scotland’s most influential designer of the 20th century—and for good reason. From immersive architectural designs to delicate stained glass panels, Mackintosh flourished in every design medium he tried and advocated for craftspeople to be given more creative independence. Mackintosh is perhaps most famous for designing the Mackintosh Rose—a simplified and stylized floral motif that feels as fresh and modern as it did a century ago—and for his substantial commission to design a new building for the Glasgow Art School, which features complex woodwork and an eclectic mix of influences and styles, including Art Nouveau.

Mackintosh’s future as a famous designer began when, as a young architectural apprentice, he enrolled in evening classes at the Glasgow School of Art to improve his drawing skills. There, a library full of up-to-date design journals exposed him to the forward-thinking work of contemporary architects and artists across Europe, and the vast array of available coursework gave him the opportunity to try his hand at many new art forms.

When Charles Rennie Mackintosh was emerging as an artist, Glasgow was at the heart of an economic boom. As a result, at the turn of the century, there were more patrons willing to commission aspiring designers like Mackintosh to undertake expensive design projects. Meanwhile, the Glasgow School of Art was becoming one of the leading art academies in Europe. This also contributed to Glasgow’s growing reputation as a hub for the latest decorative arts trends. Inspired to innovate, Mackintosh went on to win several awards as a student and, even more importantly, form relationships with fellow artists, including ‘The Four’, that would help inspire the Glasgow School style. In the midst of such a favorable economic and cultural climate, Charles Rennie Mackintosh helped put his hometown on the map. Soon, his reputation—and that of the Glasgow School style—would stretch far beyond Scotland.

The Glasgow School is a term that refers to the aesthetic popularized by Charles Rennie Mackintosh, and his circle of designers, in Glasgow from the 1890s to the 1910s. With roots in the British Arts and Crafts Movement, the Glasgow School’s distinctive style is characterized by stylized curving lines, organic forms, dreamlike mannerist figures, and simplified geometric patterns. Mackintosh and his followers often revisited their favorite motifs, including birds in flight, wildly growing plants, and sensuous, almost disembodied, and ghoul-like, female figures—the latter of which led critics to pejoratively nickname the group ‘The Spook School.’

The Glasgow School was the United Kingdom’s only notable response to international Art Nouveau, which took the world by storm at the turn of the century in a variety of ways. Mackintosh was inspired by the medieval-obsessed Pre-Raphaelite Brotherhood to embrace a revival of traditional Celtic aesthetics in his work. He and his peers were also captivated by Japonisme, which influenced many movements under the Modern Art umbrella.

Mackintosh and the Glasgow School artists experimented with an impressive range of artistic media, including but not limited to painting, illustration, textiles, interior design, metal and woodworking, ceramics, and stained glass. In fact, Mackintosh was most keen to accept commissions wherein he was given the freedom to create what he called a total design—a floor-to-ceiling expression of the Glasgow School Style, featuring a variety of carefully-crafted pieces brought together for an immersive effect.

Who Were ‘The Four’?

Charles Rennie Mackintosh was the clear leader of the Glasgow School movement, but it was his collaboration with a principal group of designers —known as ‘The Four’—that really defined the movement and launched its success. While studying at the Glasgow School of Art in the 1890s, Mackintosh befriended fellow artists who were interested in all things avant-garde. He became closest to Herbert MacNair, a fellow apprentice architect at Mackintosh’s same firm, and sisters Margaret and Frances Macdonald, who were full-time day students. These four artists formed a creative alliance, determined to pool their radical ideas and diverse talents to produce forward-thinking—and often controversial—designs, from epic architectural plans to delicate enameled necklaces.

This creative collaboration also worked its way into the artists’ personal lives: Frances Macdonald married Herbert MacNair, and Margaret Macdonald married Charles Rennie Mackintosh. Both collectively and as separate pairs, ‘The Four’ inspired each other’s prolific careers and helped lay the foundation for not just the Glasgow School movement, but the trajectory of 20th-century design across Europe.

Margaret and Frances: The Macdonald Sisters

Although a prolific artist in her own right, Margaret Macdonald Mackintosh’s achievements have historically been overshadowed by those of her husband, Charles Rennie Mackintosh. But Margaret’s enrollment at the Glasgow School of Art and establishment of a design studio with her sister, Frances Macdonald MacNair, were pivotal in establishing the international influence of ‘The Four’ in the Glasgow School style. Before their marriages, the Macdonald sisters’ studio—which produced Art Nouveau-inspired embroidery, enamelwork, and gesso panels—was commercially successful. And, throughout their respective careers, the Macdonald sisters were each recognized by name and contributed their work to exhibitions across Europe and the United States.

Margaret became especially renowned for her intricate and stylized gesso panels, which she often contributed to her husband’s interior decorating commissions, including tearooms and private residences. Charles Rennie Mackintosh frequently relied on his wife’s unique vision and strong skill set in the execution of his interior designs. He once remarked, “Margaret has genius, I have only talent.” Like her sister Margaret, Frances Macdonald MacNair influenced the work of ‘The Four’ profoundly in her solo work as an artist and in her collaborations with her husband, Herbert MacNair. Unfortunately, her artistic achievements are less understood by historians because, after her death, her husband destroyed most of her surviving artworks.

Of the nearly 100 designers that ultimately associated with the Glasgow School, the majority were women. Charles Rennie Mackintosh was always considered the figurehead of the movement, but the contributions of the Macdonald sisters and other women designers were equally important in establishing the distinctive Glasgow School style. The women designers of the movement tended to be even more daring than their male counterparts, and they were especially interested in exploring the artistic potential of fairytale imagery and taking an emotional approach to symbolism.

The Glasgow Girls helped inject traditionally feminine elements—like floral motifs and organic forms—into more masculine designs—like rigid linear and angular forms. This unexpected yet effective mixture of aesthetics and inspirations is part of why the Glasgow School was so popular and influential. By utilizing the contributions of women artists, Charles Rennie Mackintosh was empowered to create a movement that appealed to diverse audiences around the world.

During Charles Rennie Mackintosh’s lifetime, his designs—as well as works by other members of ‘The Four’—were exhibited and celebrated around the world. Along with other interpretations of international Art Nouveau, the Glasgow School style dominated trends in art and décor from the late 19th century to the onset of World War I. Interestingly, the Glasgow School was even more successful in Austria than it was in Scotland. Mackintosh and his followers strongly influenced the development of the Viennese Art Nouveau movement, also known as the Vienna Secession.

Although a handful of wealthy Scottish patrons gave him financial stability and the freedom to innovate for much of his career, Mackintosh was ultimately disappointed that the Glasgow School was not as popular in his home country as it was elsewhere. Mackintosh resigned himself to this fact and relocated to London, where he spent the final years of his career amidst patrons and peers he believed more adequately appreciated him as an artist. Today, Charles Rennie Mackintosh would be pleased to know that the Mackintosh Rose and other signature elements of the Glasgow School style are still celebrated across Scotland as some of the country’s most important contributions to history of art and design.