The Divine Feminine: 8 Ancient Forms of the Great Mother Goddess

Read on to discover different representations of the Great Mother Goddess, the divine feminine, as found in ancient art. 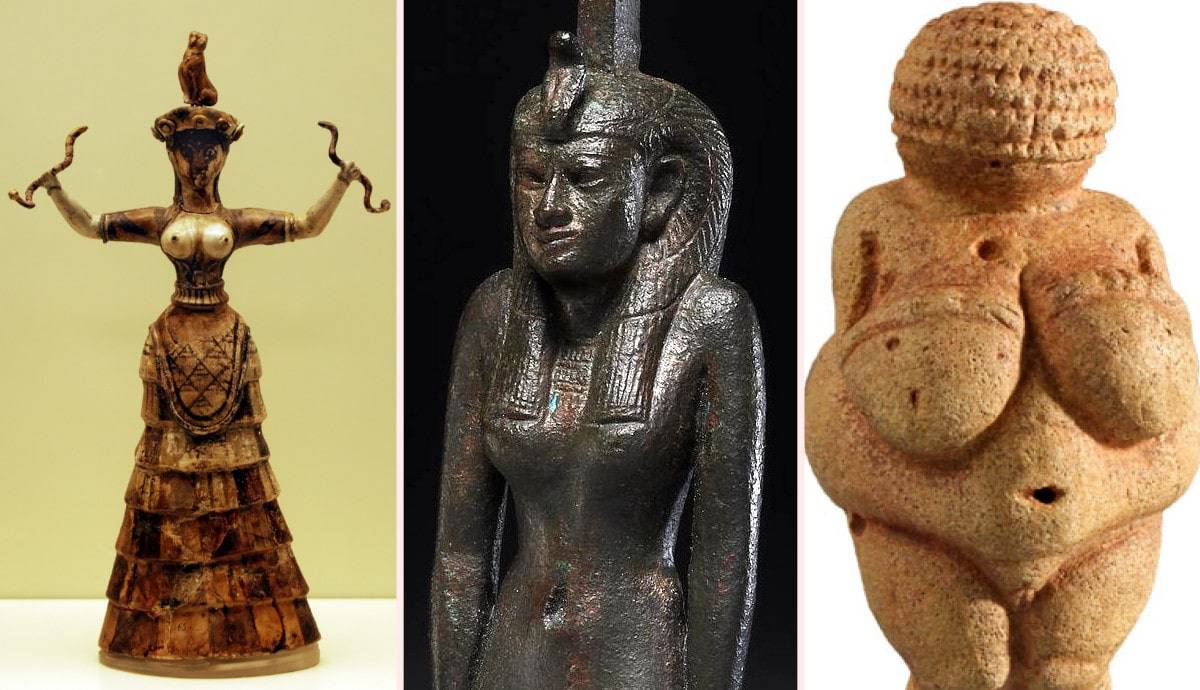 From the depths of history, the divine feminine was considered sacred and was worshipped as the matrix of creation. In many ancient societies, the nurturing nature of the divine feminine was associated with the concepts of fertility and creation and took the shape of the Great Mother Goddess. We find the Goddess religion in many parts of the ancient world long before patriarchal religions took over. Societies were structured and operated around these Goddess religions and they were ruled by a collective of priestesses who were devoted to ritual.

Women had a significant role and acted as priestesses and possibly religious leaders. For the most part, these societies were matriarchal and developed peaceful cultures, with no fortification up until the appearance of the warrior societies. The Mother Goddess, often known as Mother Earth, is a matriarchal archetype represented frequently in ancient art and found in various mythologies around the world. Today most of the major religions of the world: Islam, Christianity, and Judaism, have a male God, and the only thing that testifies to the existence of a completely different world that celebrates the sacred female comes from the evidence of ancient artefacts from the distant past.

For our ancestors, the embodiment of the divine feminine was the Earth itself. The ancients, who had more direct contact and a greater relationship with nature viewed the earth as this gigantic female being who gives birth and continuously creates life. They observed and witnessed the plants and animals being born on the earth’s surface, multiplying and finally returning to her, only to come back again through regeneration. A cycle that is maintained steadfast: birth, death, and rebirth. Earth supports the whole ecosystem, the sky, the mountains, the trees, the seas and rivers, animals and humans; she nurtures and heals all. Ultimately all life depends on her, she is the force of creation and destruction. Our ancients did not take this for granted but saw all of these as blessed gifts and therefore considered themselves as children of the earth. Earth was the divine mother of all.

The first written reference to the Earth as a mother is traced back to ancient Greek writings. Gaia was the great goddess and mother of all creation for the ancient Greeks. The concept of Mother Earth or Mother Goddess was first recorded in the early 7th century BCE by the great Greek poet Hesiod in his Theogony. Hesiod records the story of the birth of the universe, when in the beginning it was only Chaos, Gaia, and Eros. The Earth was therefore a primal deity; she was revered as the mother of all gods and living creatures and symbolized the rejuvenating care of Mother Nature.

The Divine Feminine in Ancient Art: The Venus of Willendorf

One of the oldest representations of female forms was discovered in the village Willendorf in Austria. It is known as Venus of Willendorf and it is estimated to have been made in Paleolithic times, between 25,000-20,000 BCE. The sculpture is relatively small in size, about 11 cm (4.3 inches) tall, and it depicts a voluptuous faceless female figure, with large breasts and a stomach that overhangs over an emphasized pubic area. This figure is most definitely associated with the concept of fertility, pregnancy, and birth. A characteristic of all the Paleolithic “Venus” figurines is the lack of a face. According to the art historian Christopher Witcombe, they are aniconic, so as to place emphasis on the female body and what it signifies, namely fertility and childrearing, rather than the face, which is a key aspect in human identification. We find an abundance of female figurines from the Paleolithic Period but not so many males. It is therefore assumed that women played an important role in Paleolithic culture and that a matriarchy may have existed.

The Sleeping Lady of Malta

The Sleeping Lady is a small clay figurine discovered in Hal Saflieni Hypogeum, a Neolithic burial ground in Malta. It displays a curvaceous woman lying on her side in a sleeping position on a bed. As the figurine was found in a burial site, it is hypothesized by scholars that she may represent death or eternal sleep. The ancient art uncovered in Malta again indicate the existence of worship of the divine feminine, and a prehistoric Goddess of Regeneration (birth, death, and rebirth). We have to bear in mind that at this point the society was moving from the status of hunter-gatherers to that of farmers, and with the introduction of agriculture and the cultivation of crops, men came across new problems that threatened their survival. The idea of ​​cultivation and the conception and creation of life was therefore inextricably linked with the female who is also able to bring children to the world. The Earth, therefore, is also a woman who receives respect and appreciation.

Completely different from the previous voluptuous ladies are the famous Cycladic female figurines from ancient art, that have inspired many contemporary artists. With a focus on their religious dimension, we also interpret them as symbols of the divine feminine. The nakedness of the figurines and the emphasis on the breasts and vulva directly refer to the concept of fertility. In this statuette, we can see a belly that suggests pregnancy.

The characteristic pose with folded hands under the chest we find it in many similar types of figurines from other areas of the Eastern Mediterranean (Syria, Palestine, Cyprus, etc) and it may express an established symbolic type of religious iconography. It is also important to bear in mind the fact that in ancient times there was a high mortality rate, and mother and child face serious dangers of dying during or after childbirth, so often these statuettes were used to call upon divine protection.

The Snake Goddess of Ancient Crete

The concept of the mother of all and Earth Goddess was also celebrated in the ancient Minoan civilization in Crete. These statuettes date back to the 16th century BCE. The Snake Goddess, as she is called, represents a very sensual female with exposed breasts, who holds snakes in her hands. The bare breasts may symbolize sexuality, fertility, or the supply of breast milk, and the snakes are often connected with the concept of regeneration, the underworld, and healing powers. We may never know for sure the function of these figurines, but they are the most admired works of art from prehistoric Crete. The society in which they were created centered on a well-organized system of local agricultural production which indicates that women played a dominant role in Minoan religion and society.

The Divine Feminine in Egypt: The Goddess Maat

In the art and culture of ancient Egypt, we also come across the worship of an array of female deities who were associated with values, morality, and order, as well as with women’s fertility, menstruation, conception, and the supply of breast milk. The Egyptian deity Maat, represented truth, justice, balance, and cosmic harmony, and was generally depicted wearing an ostrich feather on top of her head. For the ancient Egyptians, the truth of the universe and the world was supported by Maat. It was believed by her devotees that after death, their hearts would be weighed against her white feather of judgment, and if they were as light as the feather they would be permitted to enter Osiris’ paradise kingdom.

The Queen of the Night From Ancient Mesopotamia

The Queen of the Night relief depicts a nude female figure with wings and bird talons, standing on top of two lions. She is wearing a headdress, an elaborate necklace, and bracelets on each wrist while holding a rod and a ring. The figure was originally painted in red and the background black. It is believed by scholars that this relief may represent either Lilith, Ereshkigal, or Ishtar, goddesses from ancient Mesopotamia that were worshiped by the Assyrians, Phoenicians, and Babylonians. This figurine may represent fertility, sexual love, and female grace, but also possessed a darker aspect. The divine feminine was connected not only with the concept of life but also with war and death. As it is in nature that you find this cycle of life, death, and rebirth, so it is in the nature of these goddesses.

The Goddess With Uplifted Arms: The Divine Feminine in Ancient Cyprus

This clay statuette of the Goddess with Uplifted Arms was found in Cyprus. These figurines were excavated in various temple locations around the island that were dedicated to the worship of the local goddess. The worship of this Goddess was influenced by the Eastern cult of Astarte, which reached the island with the arrival of the Phoenicians, as well as the Mediterranean Goddess of the Cretans. This female figurine is characterized by the gesture of her uplifted arms, an influence that possibly came from Crete, as we see it also in the figurine of the Goddess of Snakes. These figurines are extremely important and may represent the priestess in a ceremonial gesture of worship, and through that, the divine feminine. 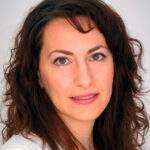 By Stella KarageorgiBA Fine Art & Art History, MA Fine Art, Ph.D. Fine Art Stella Karageorgi is a fine art specialist and a researcher from Cyprus. She holds a Doctorate in Fine Art practice from the De Montfort University in the UK, a PG Diploma & MA in Fine Art from Central Saint Martins and the University of Northampton, and a BA in Fine Art & Art History from the University of Texas. She is fascinated by the ancient past, the sacred, the childlike, the colorful and the playful. In her creative work and research, she explores the parallels between contemporary and prehistoric art through the use of symbols, motifs, and archetypal themes.

Lessons about Experiencing Nature From Ancient Minoans and Elamites