HomeAncient HistoryThe Role of Egyptian Women in the Pre-Ptolemaic Period

Egyptian women led fascinating lives even before Cleopatra in pre-Ptolemaic Egypt. They enjoyed a more balanced role with men and had more freedom than women of other classical societies. 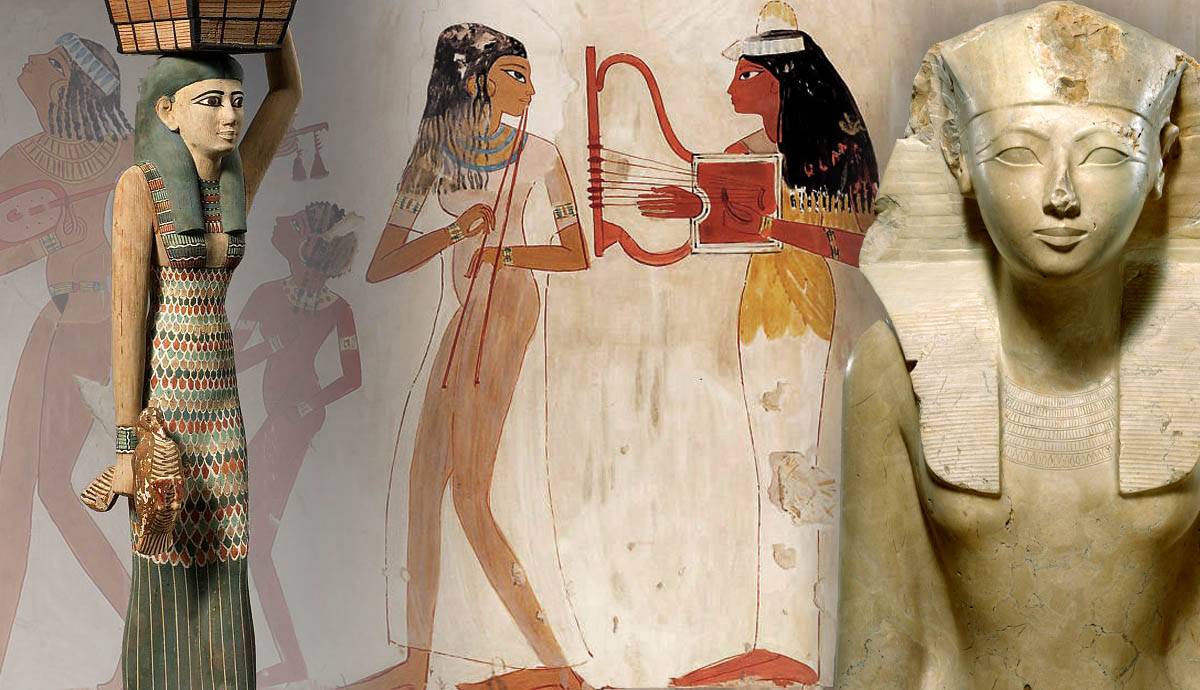 Ancient Egypt can be pinned down from 3150 to 332 BC, before the start of the Greco-Roman and Ptolemaic periods. As in most ancient societies, women had a social standing that was inferior to that of men. However, compared to the situation from other great civilizations such as the Greek or Roman societies, Egyptian women did have slightly more freedom and rights. The role of women in pre-Ptolemaic Egypt is a complex situation in which we cannot qualify them as equal to men. Even so, these women led fascinating and inspiring lives for ancient standards and thus are worth exploring: the average ancient Egyptian woman can be just as fascinating as Cleopatra.

Even though pre-Ptolemaic Egypt was a patriarchal society where men exercised the most power, Egyptian women had more rights when compared with other ancient societies. They theoretically shared a legal status with men, could own properties, and enjoyed more liberties that we associate with modern life. Their liberties, however, came with certain limitations. For example, they could not hold important administrative positions. They could only be placed in key positions through their relationships with men, thus highlighting the patriarchal aspect of ancient Egyptian society.

What sets apart the position of Egyptian women in pre-Ptolemaic Egypt is the fact that social dignity was conceived as a result of social status instead of gender. Therefore, this cultural conception allowed women not to be so limited by sexism but rather climb and claim similar social statuses with men. This latter point is proved by the fact that economic and legal laws did not judge them based on their gender but their status, as they could sue, obtain contracts, and manage legal settlements including marriage, divorce, and property.

What Did Ancient Egyptian Women Do In Pre-Ptolemaic Egypt?

Egyptian women’s rather liberal social status is indicated by the array of jobs they could occupy. They could work in the weaving industry, in music, be professional grievers, hair specialists, work in the wig industry, work as treasures, writers, songstresses, dancers, musicians, composers, priestesses, or directors of the kingdom. There is a record of a Nebet from the Old Kingdom who worked as the vizier of the pharaoh, a high-ranking official position that made this woman the right hand and most trusted advisor of the pharaoh.

The music industry was just as profitable for women. The case of the musical duo of harpist Hekenu and cantor Iti proves precisely this: the two women were so popular in ancient Egypt that rich people wanted the two painted inside their graves so they may sing to them even in the afterlife.

When compared to women from other prominent ancient societies, most notably Greek and Roman civilization, it is clear that Egyptian women enjoyed more liberties. They were not confined to the household as their other ancient counterparts but could take jobs and effectively pursue careers in different domains. Although it was not completely without boundaries, for the most part, women did have enough freedom to move around as they liked and have a life beyond that of the household.

The majority of Egyptian women from antiquity were peasants, while aristocrats were only a small portion of the female population. The peasant women helped their husbands with their work, often working alongside them, while only the well-to-do women could afford to have better jobs or not work at all. It was common for an aristocratic Egyptian woman to work mostly near her home, supervising servants or taking care of her children’s education.

Wealthier women had even more options as they could possess their own households where they would hire men and women who would upkeep the household together. It is interesting to note that in a woman’s household, other women would have administrative roles and supervise her household after being employed by the owner. In this way, wealthy Egyptian women could dedicate themselves to their respective work even more if they could afford to hire other women and tutors to look after their children. Thus, these wealthy women would work as perfume-makers, in entertainment as acrobats, musicians, dancers, or in court or temples.

Women in ancient Egypt were seen as mostly equal to men in marriage. This is thought to be the case from the numerous songs and poems that often compare the pair with a brother and a sister, suggesting thus that they have an equal status in the family. Moreover, the story of Osiris and Isis influenced the way Egyptians saw marriage. Because the two gods were brother and sister and shared a rather balanced relationship, this was the inspiration for how married couples were ideally depicted in songs and poems. Of course, not all marriages followed this ideal.

Marriage contracts were a common occurrence in Ancient Egypt and they were designed to protect women. A marriage contract dating from 365 BC placed more financial burdens on men to protect women from divorce and work in their favor. This shows that, legally speaking, there was enough regard for women to create ways to protect them and ensure their welfare. Widows, for example, were usually seen as outcasts in other ancient societies, but it seems like they were able to enjoy many freedoms in Ancient Egypt despite a bit of stigma.

Childbirth And Motherhood In Ancient Egypt

The Nile and the black earth played a major role in the culture and belief system of Ancient Egypt as they were associated with fertility. Due to this, fertility was highly regarded and associated with Egyptian women. Fertility was culturally and socially important, and infertility in a woman could provide her husband with a good reason for divorce or a second wife. The role that fertility played in the minds of ancient Egyptians can be understood from the many fertility rituals that existed and were widely practiced. After becoming pregnant, the mother’s belly would be consecrated to the goddess Tenenet, meant to oversee the pregnancy. On the other hand, contraception was not frowned upon, and there existed many methods and cures that would prevent women from getting pregnant.

Concerning pregnancy and finding the biological sex of the child, Egyptians used a method that spread to Europe and survived for many centuries. Some barley and wheat grains would be placed in a cloth and soaked in the pregnant woman’s urine. If the wheat sprouted, the child would be a boy, and if the barley did, it would be a girl. Childbirth was seen as a ritual where the woman’s head would be shaved, and she would be placed on a mat with a brick on each corner. Each brick represented a goddess meant to protect the mother while giving birth.

Women As Depicted In Pre-Ptolemaic Ancient Egyptian Literature And Art

The bust of Nefertiti is probably one of the first art objects that comes to mind when someone thinks about artistic depictions of pre-Ptolemaic Egyptian women. Women were depicted in Egyptian art in many instances, both as goddesses and humans. For example, depictions of Egyptian women entertainers were fairly common. Lastly, women were also depicted in art when they were part of an important family or the pharaoh’s wife. However, in royal depictions, the wife would always be smaller than her husband, the pharaoh, because the pharaoh was considered the greatest figure of Egypt. Connected to this, the fact that the transmission of power was usually made from man to man didn’t help the case of royal equality either. Even so, there are exceptions. Nefertiti, for example, is the only queen that was depicted as equal in size with her husband.

In literature, there is also convincing evidence that points to the fact that wives and women, in general, were held in high esteem. A maxim from the Third Dynasty of Egypt advises men to love their wives with all of their hearts and make them happy as long as they live. This points that ideally, the bond between husbands and wives should be a strong one, showing that women were seen as important partners in the relationship.

Probably the most popular Egyptian queen is Cleopatra. However, not everyone knows that she lived during the Ptolemaic period when Egyptian culture adopted much of the Greco-Roman values and ideals, which influenced how women were viewed. While both Greeks and Romans did not see women as fit candidates to rule a territory, this wasn’t necessarily the case with Egyptians from the Old, Middle, and New Kingdoms. Like most ancient societies, men were the ideal choice for ruling as the power was transmitted from father to son. However, the pharaoh, like a god on earth, had divine power bestowed upon him and the same divine power would be bestowed upon his spouse as well. This opened the path to women acquiring the role of pharaohs.

Ancient Egyptians preferred their ruler to have royal blood so, if there were no male heirs, a woman would have the chance to become the ruler thanks to her noble bloodline. She would adopt all the necessary regalia and conduct herself as a male when ruling through the use of the ruling symbols. Moreover, it is speculated that there might have been pharaohs that we traditionally thought of as male that were actually female. It is difficult to discern the sex of certain pharaohs because artistic representation depicted them as male regardless. The most iconic example of a known female pharaoh is that of Hatshepsut, who had a long and prosperous reign.

Nevertheless, even before Cleopatra, the life of women in pre-Ptolemaic Egypt is a fascinating topic that unravels a complex status within Egyptian society. There is still much left to discover about the life of Egyptian women, be they poor or rich, young or old.