As in every culture, food was very important in Ancient Rome. Roman food can be distinguished by its ingenious use of ingredients to create exciting dishes. 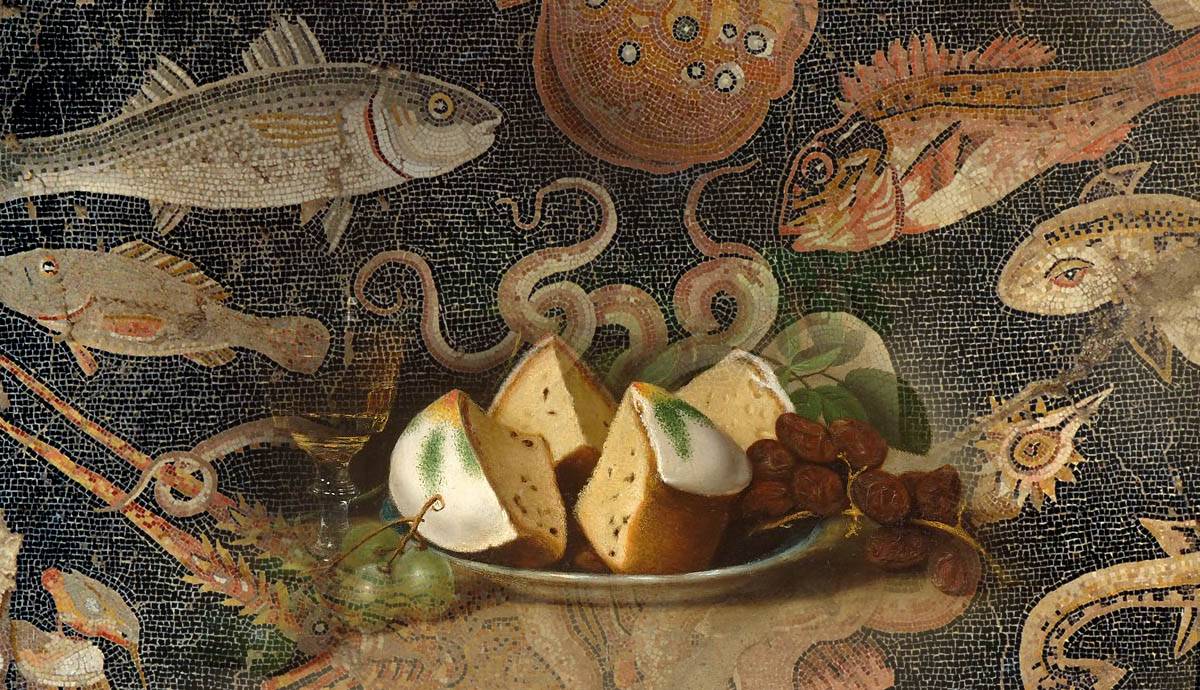 Ancient Rome had plenty of things by which to be remembered. The Colosseum, the Roman Empire, and the Roman Republic are all hallmarks of its history. However, Roman food must be included on the list of memorable aspects of Ancient Roman culture. Roman food was another domain in which the Romans excelled, creating all sorts of dishes from both familiar and exotic ingredients.

Food is often a way to express one’s culture. In this sense, Roman food also reflects the ingenuity of Romans. The Roman method of serving meals and the purpose of certain dishes align themselves to the Romans’ daily lives and beliefs. The famous ingredient garum, still a mysterious liquid we can’t fully replicate today, was used in most food for both poor and wealthy Romans alike. This article explores the culture around Roman food and some surviving recipes.

Food and Traditions in Ancient Rome

Even though food perishes easily and cannot resist the test of time, archaeologists have been able to uncover some details regarding the food of Ancient Rome. The information about Roman food comes from two sources: archaeological investigations and visual representations from Ancient Rome. The latter mainly refers to frescoes that survived inside Roman houses or buildings, as the frescoes frequently depicted banquet scenes with food plates. This offers contemporary historians an idea of what a Roman meal looked like.

Archaeological findings indicate that Romans were familiar with chickpeas, fish, sea urchins, dill, coriander, flax, lentil, cabbage, opium poppy, various nuts, fruits, legumes, and shellfish. Grapes, used for wine or eaten fresh, as well as bread and various pastries were no stranger from the Roman diet. Even though the raw ingredients were very similar to what is used today in most parts of Europe, eating habits and recipes in Ancient Rome still differ greatly.

Just like today, there were three meals in the culinary tradition of Ancient Rome. An equivalent of breakfast, called ientaculum, was enjoyed at dawn, followed by cena in the middle of the day. Cena was the main meal of the day and the most consistent. Before going to bed, Romans enjoyed vesperna, which was a light meal. However, these three meals were not a constant throughout the history of the Roman Empire. As the Roman Empire grew larger and more prosperous, the main meal of the day, cena, changed. It became more prominent and more varied as more exotic dishes were included in the menu of Roman food. Due to this, the vesperna ceased under the influence of cena, as the latter extended into the evening in well-to-do Roman households, which could afford multiple dishes to be served from afternoon till evening.

The meals revolved around the daily schedule of Romans. For the working class, meals were organized around the working day so that there was an extra meal, the prandium, which was a mid-day meal before cena that could temper the workers’ hunger. On the other hand, the Roman upper classes managed all the affairs in the morning so that they could enjoy cena starting at 2 p.m. after first visiting the baths. Cena would often be accompanied in the evening by comissation, or the drinking of alcohol.

Cooking Roman food was highly dependent on the most important spaces in one’s home: the lararium and focus. The lararium was the altar dedicated to the household deities believed to protect the house. On this altar, small sculptures of the respective deities would be placed, and daily food sacrifices would be made. The focus was another important element of the domestic space which included an altar. The focus was the hearth of the household and was usually placed in front of the altar. For wealthier homes, a focus would be portable, commonly made out of stone with bronze as it could be moved around.

Food could be cooked on the focus, but portable stoves and ovens were also commonly used. These would sometimes have grills made into them so food could be prepared with ease. Archaeological investigations from Pompeii show that most houses had separate kitchens. The kitchens were relatively small in ordinary houses and very large only in the case of villas, as the latter would be usually owned by wealthy families. Interestingly enough, the Pompeii kitchens had no roofs to allow smoke to ventilate.

The preferred drink in Ancient Rome, just as in Ancient Greece, was wine. The wine was usually mixed with water because the fermentation of grapes was not such a refined and finely-tuned process as it is today. As a consequence, the wine’s alcoholic concentration was quite high. There are interesting records that tell how Romans were able to make white wine from red wine and vice versa. They also had ways of salvaging wine that had started turning into vinegar.

Unlike today, wine in Ancient Rome had various flavors and variations. For example, passum was a sweet and robust wine made of raisins. This recipe is believed to have originated in Carthagina and then spread across the Roman Empire. Another type of wine is the mulsum, made from wine and honey, which rendered it a liquor-like sweet drink. Honey was also an essential ingredient in conditum, a mixture of wine, honey, and spices. A recipe for Conditum Paradoxum lists wine, honey, pepper, laurel, dates, mastic, and saffron as the ingredients for this type of drink.

Probably the most famous ingredient of many dishes in Ancient Rome was garum. Garum was a fermented sauce made out of fish. However, this ingredient wasn’t a typical choice exclusively in Rome, but also in Phoenicia, Ancient Greece, Carthage, and later on in Byzantium. A very similar ingredient to garum was liquamen, which was obtained through a very similar preparation. As a result, the words were sometimes used synonymously.

According to the account of Pliny the Elder, garum was produced from fish intestines fermented with salt and possibly with some other ingredients to create a sort of liquor. From this production, a fish paste named allex would result as a byproduct, and used in cuisine. Poorer Romans tended to use this paste to flavor their porridge. The garum could be fermented in different grades. The more flavored and noble in aspect, the better.

This fish sauce was sold in different concentrations for various prices so that the finest would be very expensive and could be afforded only by the rich. It was such a well-loved ingredient that even poets and writers praised it in their various works.

In order to give an idea of what a menu could have looked like, this section will explore some surviving Roman food recipes. The main dishes could be composed of ova spongia ex lacte (translating as eggs with honey), dormouse (marinated dormouse), thynnus (tuna), and isicia omentata (something that resembles a hamburger). A side dish could be made out of globuli (sweet fried cheese), while the dessert could be libum (an Ancient Roman equivalent to today’s cheesecake).

The ova spongia ex lacte, like most surviving Ancient Roman recipes, appears in the cooking book attributed to Apicius, De Re Coquinaria. Even though it is a main dish, it can be easily considered a dessert because of its sweetness. The main ingredients for this dish are eggs, milk, honey, and pepper. You beat the eggs, mix them with everything else, and fry the mixture in a bit of olive oil. The dormouse recipe can still be achieved with chicken or any other meat. This dish requires flour, cumin seeds, caraway seeds, honey, bay leaves, and olive oil. Isicia omentata needs meat, white wine, pepper, pine nuts, liquamen (any salty liquid or just salt), and caroenum (sweet cooking wine).

Side Dishes and Desserts in Ancient Rome

The above-mentioned side dish, globuli, could be achieved by frying cheese. Any type of cheese can be used, together with semolina, honey, and some olive oil all fried together. The cheese, preferably soft, is mixed with semolina until a dough is achieved. This has to sit for a few hours, and afterward, it can be fried quickly. After the oil is drained from the globuli, they are rolled in honey and served.

A typical dessert that also had a sacrificial role was libum, a cake dedicated and sacrificed to the gods and spirits of the household. After its sacrificial role was completed, the cake would be eaten by the inhabitants. The ingredients to prepare it included flour, cheese, egg, bay leaves, and honey. The flour, the beaten egg, and the cheese were combined to form a mixture. This dough would be divided, placed on a bay leaf, and cooked in the oven. Afterward, the cooked buns would have honey poured over them until it was absorbed completely. After it cooled, the libum was served in the name of the gods and protectors of the household.

Legions Unleashed: 5 Battles That Made the Roman Empire

Roman Baths: An Integral Part of Life in the Ancient Empire