HomeAncient HistoryThe Mysterious Venus of Willendorf: What Does It Mean?

The Mysterious Venus of Willendorf: What Does It Mean?

The Venus of Willendorf is the most famous example of portable prehistoric art anywhere in the world. Why was it made, and what does it mean? 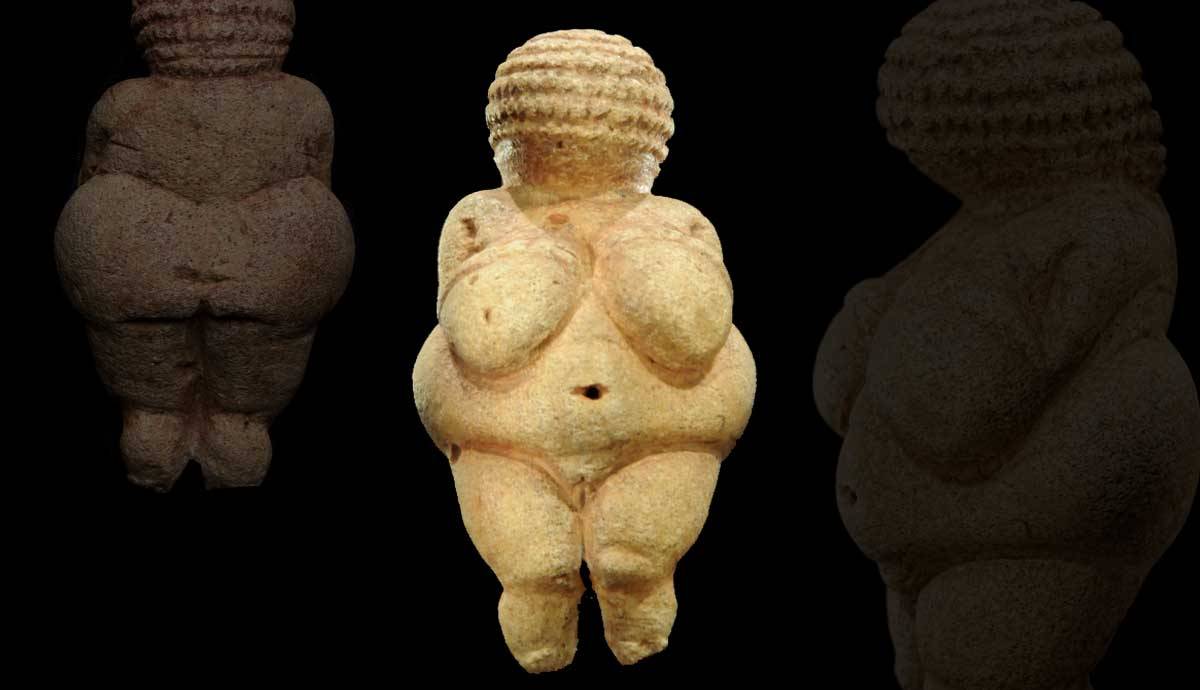 A 25-30,000-year-old female figurine, the so-called Venus of Willendorf was discovered in an Austrian village in 1908. It is an example of a piece of art from the Paleolithic (Old Stone Age) era in human prehistory, long before humans began writing or living in permanent settlements. Its exaggerated proportions, with outsized breasts, stomach, and thighs, easily invite interpretations involving fertility and sex, but the figurine’s actual connotations and function remain mysterious.

The Venus of Willendorf

The object commonly known as the Venus of Willendorf is a small (11.1 cm high) stone sculpture of a corpulent nude woman. Carved in the round — it is fully three-dimensional — created from a type of limestone called oolite, the figure has a distinctive shape, with massive breasts, stomach, and buttocks. It has tapering legs, with large thighs but no feet, skinny arms draped over the breasts, slight indications of hands, and a rounded head with the impression of curly hair or a hat all the way around. The Venus of Willendorf has no face, however her genitals are depicted in more detail than anything else. She originally had reddish ochre paint that is now mostly lost.

Although she was found buried in the Austrian village of Willendorf at the beginning of the 20th century, recent scientific analysis has concluded that the figure’s oolite comes from either northern Italy, or less probably, Ukraine. The material certainly isn’t native to Austria, making it clear that either the raw material or the finished sculpture did some traveling at some point in its long life.

Because the stone is naturally much older than the carving itself, the Venus of Willendorf has been difficult to date. After several revisions that made it older every time, the currently-accepted estimate is 25,000-30,000 years before present, putting it in what archaeologists have termed the Gravettian period (around 29,000-22,000 years ago), within the last Ice Age. This makes it among the oldest three-dimensional representations of the human form that have yet been discovered.

The Venus of Willendorf is not unique. More than a hundred other prehistoric female statuettes, many with similarly exaggerated proportions, have been found throughout Europe and the Mediterranean. Some have come to light as recently as 2016 (in Turkey) and 2017 (in Russia).

Often referred to as “Venus-type figurines”, they are usually made of stone, bone, or ivory. Their small sizes and rounded shapes would easily fit in a hand, and these portable objects would have easily been carried from place to place by typically-nomadic prehistoric peoples. The oldest currently known Venus figurine is the 35-40,000-year-old Venus of Hohle Fels found in Germany. At the more recent end of the spectrum, abstracted female figurines found of the Cycladic islands in the Aegean are no more than 6-7,000 years old.

All these figures are non-naturalistic, meaning that they are stylized rather than lifelike versions of the female body. Traits associated with naturalism do sometimes appear in prehistoric art, such as modelling to indicate the volume of animal forms in some cave paintings. This suggests that we should consider the distorted proportions of these Venus-type figures as intentional and meaningful rather than necessitated by a lack of skill. Although Paleolithic female figurines certainly outnumber male ones, it is important to note that images of animals and human-animal hybrid creatures also appear.

It is nearly impossible to know with certainty why the Venus of Willendorf and her sister figurines were made or what they meant to their original owners and makers. By nature, no item of prehistoric art has any written records to shed light on its meaning, since the term “prehistoric” specifically refers to human society before written language.

With written records nonexistent and material evidence scarce, researchers understand very little about the culture that made this Venus figure. In particular, religious practices and other belief systems that might explain the significance of prehistoric artworks do not leave much trace in the archaeological record. Therefore, we lack most of the context that would help us to better understand these mysterious figures. Archaeology, visual analysis, and speculation are our only possible sources for answers.

Most Venus figures display an emphasis on body parts involved in childbearing, which has led many people to the reasonable conclusion that the statues had some connotations associated with fertility, sex, or pregnancy. Common theories include the possibility that the statuette represented a fertility goddess or was a personal talisman intended to assist is some aspect of the female reproductive cycle. Some scholars have taken this to suggest that prehistoric societies placed great value on women. Others have focused on the figures’ facelessness — some don’t even have heads at all — which could mean that prehistoric cultures only valued women for their reproductive parts.

A recent study has looked at the distribution of Venus figures according to their find spots, noting that the statues became measurably more voluptuous with increased proximity to glaciers. Remember that these figures were made during the last Ice Age, a time with much colder temperatures and more abundant glaciers than we are used to today. In such conditions, body fat would have been necessary for survival, perhaps particularly so for pregnant women. Therefore, this study has proposed that the heavyset Venus figures may have been personal charms meant to help their female owners achieve a then-desirable body type. Remember however, that while the majority of Venus-type figures portray women with very full figures, some do not.

Other, more sensational suggestions include the idea that the Venus was an example of prehistoric pornography or a sex toy. Facebook seems to agree, since it has censored images of the Venus of Willendorf. Inevitably, some people have wanted to see them as indications of ideal female beauty in the Ice Age. In fact, that’s how this famous object got its colloquial name.

The Venus of Willendorf is Not a Venus

In Roman mythology, Venus was the goddess of beauty and fertility — something like the ideal female at least aesthetically (Aphrodite was her Greek equivalent). The prehistoric peoples who made this statue almost certainly did not have a goddess called Venus, so they would not have given the figurine this name. When she was discovered in the early 20th century, however, experts assumed she had similar connotations. Because Venus-type figurines were first uncovered and studied by early-20th century European men, all kinds of creepy racism and sexism may have come into play in the early naming and interpretation of them. The statue sometimes receives the highly generic title the nude woman or else the Woman of Willendorf, which are both more accurate but far less catchy. It is still most common to call her the Venus of Willendorf, despite the misnomer.

In reality, we have absolutely no way of knowing what any of the Venus figures meant to the cultures that originally made them. They may or may not have represented beauty and fertility, and their prehistoric makers may or may not have had a Venus-like deities in their pantheon. As some scholars have astutely pointed out, we cannot even be sure how gender and sexuality were understood among prehistoric cultures, and we certainly don’t know if these figures’ intended users were male or female. Modern scholars’ views and assumptions about society, gender, and sexuality are therefore likely to cloud any possible interpretation.

All of the proposed theories are valid possibilities, and the emphasis on the figure’s reproductive parts certainly suggests that fertility was involved on some level. However, no interpretation is the foregone conclusion that sources sometimes imply. It is very common to find articles stating that the Venus of Willendorf was definately a fertility talisman or that it is unquestionably evidence that Paleolithic people felt a particular way about women.

Even if they’re correct, however, we genuinely have no way to know that conclusively. Anthropologist Bruno David is quite accurate in his observation that “The interpretations that have been attributed to them [Venus figurines] seem to reflect more the culture and preconceptions of those doing the interpreting over the past 150 years than the Upper Palaeolithic cultures from which they came. From male-dominated viewpoints in the first part of the twentieth century to more self-reflective approaches that focused on the social construction of gender and calls for self-determination following the 1960s, to the symbolic power of information exchange in the 1980s, Venus figurines have become a useful way of exposing the sociology of our own Western biases.” (David, Bruno, Cave Art, 2017)

What we can be sure of, however, is that the Venus of Willendorf had real importance. We can know this because some prehistoric person took the time and effort out of their demanding hunter-gatherer existence to make it. Although we don’t understand its significance today, the sculpture has a lasting fascination for us. As proof, look no further than Nina Paley’s Goddess Gifs and Latvian artist Brigita Zelča-Aispure’s Venus of Willendorf 21st Century sculpture in Riga. As for the key questions — whether she was some kind of goddess or an insight into prehistoric ideal female beauty, all we can do is speculate.

Ancient Mesopotamia: How Did Art Lead to Writing?

8 Gods of Health and Disease From Around the World