HomeAncient History8 Gods of Health and Disease From Around the World

8 Gods of Health and Disease From Around the World

Across time humans have worshipped many gods of health to protect their lives in this world. Here are eight of these divine beings from around the world. 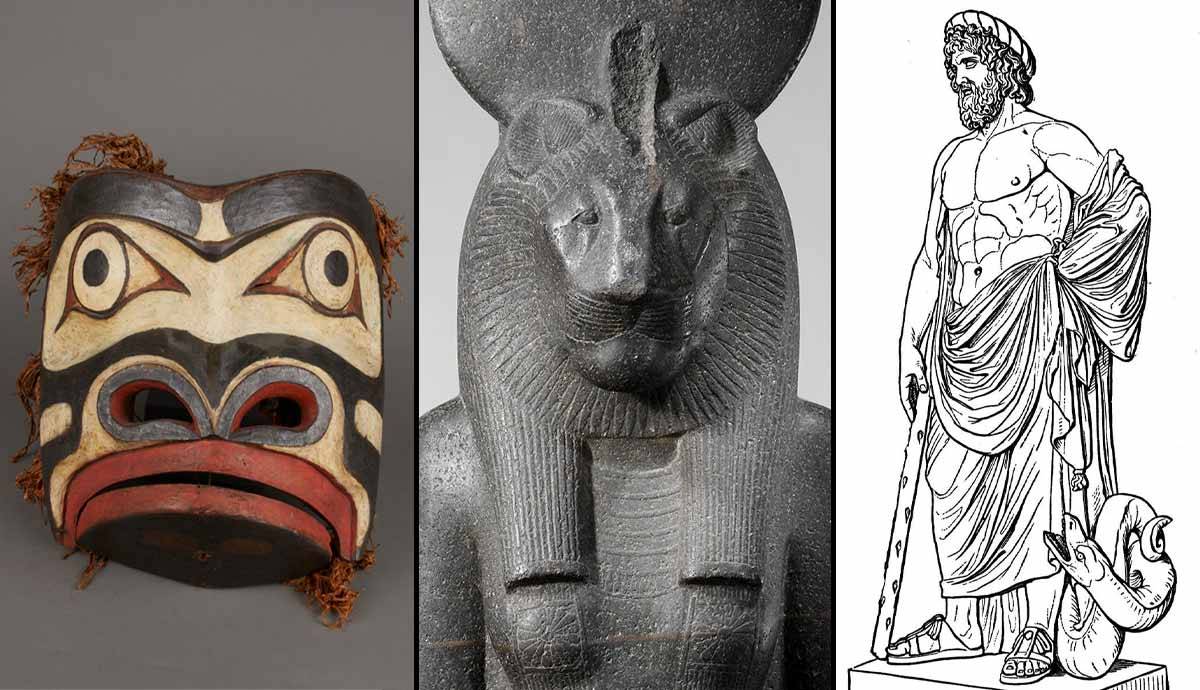 We humans have proven ourselves to be extraordinarily creative when it comes to the gods and spirits we worship. The God of Judaism, Christianity, and Islam is an omnipotent being, responsible for both creation and care of the entire universe. Yet in the grand scheme of things, Abrahamic-style monotheism is a fairly recent historical development. During ancient times, people around the world more often worshipped a plethora of sacred beings, every one of them linked to a different attribute from our world.

Gods of health, healing, and disease can be observed across cultures. These divine personalities often had to be appeased in order to allow humans to live healthy, safe lives. Even today, many societies continue to revere gods and goddesses for protection in this life, rather than solely in the next. Here are eight gods and goddesses of health and disease from cultures around the world.

1. Asclepius: The Greek God of Health

Starting off our list of gods of health is Asclepius, from ancient Greece. Many Greek mythology aficionados might not know his name, but they may recognize his symbol: a standing staff with a snake coiled around it. This symbol, known as the Rod of Asclepius, has become the modern symbol of medical care. Although it is often confused with a similar emblem linked to the god Hermes, called the caduceus, a true medical professional would undoubtedly recognize the differences.

Asclepius was actually only half-god at birth. In all mythic accounts, his father was Apollo, the Greek god of the sun. Some stories name his mother as Koronis, a human princess. After he discovered that Koronis had been having an affair with a mortal man, Apollo killed his former lover. However, he spared the infant Asclepius, who would go on to receive training in medicine from the centaur Chiron. Between Chiron and Apollo, Asclepius became Greece’s most renowned physician, capable of even resurrecting the dead. Zeus, the king of the gods, feared his abilities, opting to murder Asclepius. Yet Asclepius’ children would continue their father’s medicinal work, becoming lesser gods of health in their own right.

2. Sekhmet: The Lioness of War and Life

While Asclepius was solely the god of medicine, the Egyptian goddess Sekhmet played multiple roles. Not only was she the goddess of health, she was also the goddess of war. Since early times, Egyptian artwork depicted Sekhmet with the head of a lion, symbolizing her ferocity. Countless Egyptian rulers claimed Sekhmet as their own during wartime, charging into battle in her name.

Her craving for battle could not be satisfied. According to one myth, Sekhmet originally came from the eye of the sun god Ra, who sent her to destroy rebellious humans threatening his authority. Unfortunately, Sekhmet got so wrapped up in her killing spree that even Ra was shocked. After Ra gave her a concoction of beer, she fell asleep, and the killings stopped. The gods had gotten their message across to the mortals.

War was not the only reason Egyptians both venerated and were terrified of Sekhmet. Her formidable power over disease befitted her destructive nature. If devotees made her angry, Sekhmet could cause epidemics among humans as a punishment. Conversely, she could cure illnesses in addition to causing them. Her priests were seen as valuable healers, who interceded for their people during times of need.

3. Kumugwe: God of Healing, Wealth, and the Ocean

In examinations of world religions, the Pacific Northwest region of the United States and Canada tends to be overlooked. This doesn’t mean, though, that its inhabitants haven’t fashioned for themselves a plethora of gods and spirits. Kumugwe, the god of health for the indigenous Kwakwaka’wakw people, is a great example of a fascinating and understudied deity.

The Kwakwaka’wakw have long associated Kumugwe with the sea. He is said to live deep beneath the ocean in a home filled with hidden wealth. Local stories tell of mortals who try to find these riches; many of these treasure-seekers never return alive. For those that do earn Kumugwe’s favor, however, the benefits are incalculable. As the god of health and wealth, Kumugwe can heal sickness and reward humans with great riches. Between his power over the oceans and his healing capabilities, Kumugwe deserves a spot among the great gods of health in global religious traditions.

4. Gula/Ninkarrak: The Healer with a Love of Dogs

We move on to Mesopotamia — possibly the earliest region on the planet where humans constructed complex towns and cities. During ancient times, this region along the Tigris and Euphrates rivers was decentralized. Like in ancient Greece, different city-states existed apart from each other, with different patron gods. Yet some of these deities did develop regionwide cults. A number of gods of health existed in Mesopotamia, which brings us to the deities Gula and Ninkarrak.

These goddesses were originally separate health deities, worshipped in different parts of Mesopotamia. Over time, they merged together, with a cult centered around the city of Isin, in modern Iraq. Gula was said to have given humans medical knowledge as a gift. Since Mesopotamians made no distinction between scientific and religious healing techniques, doctors gave offerings to Gula for assistance in their work.

For nearly their entire existence, Gula and Ninkarrak were associated with dogs. Archaeologists have discovered numerous clay sculptures of dogs in their temples. This association of dogs with healing stands in direct contrast to the treatment of dogs in the region today. Whereas devotees of Gula and Ninkarrak viewed dogs with respect, many in the modern Islamic world regard dogs as unclean.

5. Babalú Ayé: Health and Disease as One

Every year on December 17, worshippers gather at the Church of Saint Lazarus in the Cuban town of Rincón. At face value, this might sound like just a description of a Roman Catholic pilgrimage. However, it is actually much more complex, devoted not only to the Biblical Saint Lazarus but also to a West African god of health and disease.

Like other Caribbean islands, Cuba saw a huge influx of enslaved people from Africa during the Spanish colonial era. Many of these slaves came from the Yoruba people of modern Nigeria and carried their religious beliefs — centered around worshipping the orisha — with them. By the end of the nineteenth century, Yoruba religious concepts had merged with Spanish Catholicism to form a new belief system: Lucumí, or Santería. Practitioners identified different orisha with various Catholic saints. Saint Lazarus was merged with the orisha Babalú Ayé, the Yoruba deity responsible for both disease and healing.

Babalú Ayé is similar to the Egyptian Sekhmet in his command over both sickness and wellness. If he is angered, he can cause plagues and bring about significant human suffering. If his devotees appease him with prayers and offerings, however, he can heal any affliction.

6. Verminus: The Obscure Protector of Cattle

This one was more of a god of sickness than a healing deity. Out of all the gods of health and disease on this list, Verminus is the one we know the least about today. A truly obscure deity, Verminus does not appear to have been widely worshipped by the Romans. Few written sources describing the god have survived, but what is clear is that Verminus was a lesser god associated with the diseases of cattle. Scholars have linked the date of the remaining inscriptions — created some time during the second century BCE — to zoonotic disease epidemics which spread from cows to humans.

No surviving evidence indicates that worship of Verminus ever reached empire-wide levels. Instead, the sun god Apollo, adopted from the ancient Greeks, was more commonly associated with health. Unless archaeologists discover more inscriptions referring to Verminus in Europe, the god of cattle and animal diseases will most likely remain lost to history.

The Hindu religion is unique among modern global faiths in that its gods often take on other personalities, known as avatars, in the physical world. That is precisely where Dhanvantari, the Hindu god of health and medicine, comes from. According to some Hindu texts, Dhanvantari isn’t exactly an independent deity, but rather an avatar of Vishnu, the supreme protector in many Hindu traditions. Hindu sacred texts known as the Agni Purana describe how the gods tried to manipulate the primordial Ocean of Milk, looking for the nectar of life (amrita). Dhanvantari held the bowl containing the amrita, but the gods’ enemies (called the asuras) stole it from him. Fortunately for the gods, Vishnu sent another of his avatars, Mohini, to take the amrita back.

8. Apollo: God of Health in Greece and Rome

Here, our look at eight gods of health and disease comes full circle. We will end our journey with Apollo, the god of health and the sun to both the ancient Greeks and Romans. The father of our first god, Asclepius, Apollo was definitely one of the most versatile gods in ancient Greek religion. Not only did he function as the sun god (his greatest claim to fame), but he was also the deity of poetry, music, and art. The bow and arrow were his most famous emblems, a trait shared with his twin sister Artemis. With his cult centered in the city of Delphi, Greek myths speak of Apollo as a god who spearheaded the final charge in the Trojan War. Like his Olympian brethren, Apollo could be quite vindictive towards his enemies, capable of causing plagues. After Zeus killed his son Asclepius, Apollo retaliated by murdering the cyclops who crafted Zeus’ lightning bolt.

Interestingly, the Romans retained Apollo’s Greek name after they adopted him. Some sources refer to him as Phoebus, but this was not universal. This makes Apollo one of the few major gods in Roman mythology who shared a name with his Greek counterpart.

What Does the Snake and Staff Symbol Mean?