HomeAnswersWhat Does the Snake and Staff Symbol Mean?

What Does the Snake and Staff Symbol Mean? 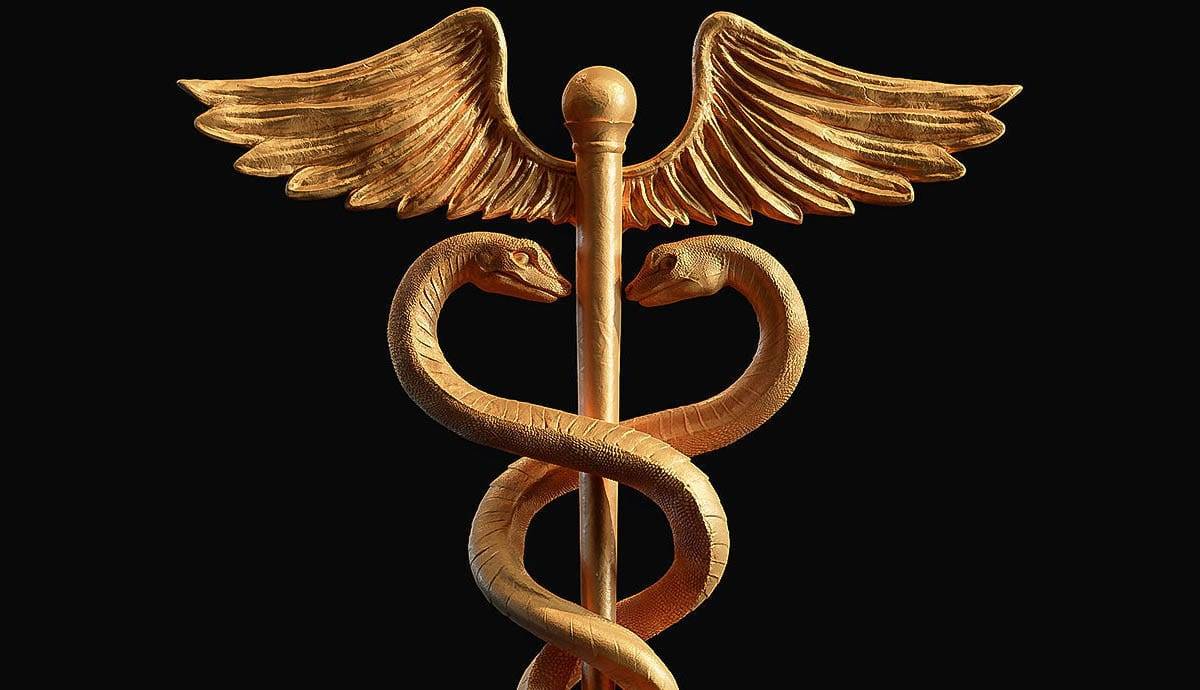 The snake and staff symbol is one which many of us might recognize today. Universally associated with medicine and healing, it has appeared in a variety of different locations, from ambulances to pharmaceutical packaging and staff uniforms, and even at the World Health Organization (WHO). Interestingly, there are two versions of this logo, one with a staff surrounded by two interwoven snakes and a pair of wings, and another, with a single snake coiling around the staff. But why do we associate snakes with medicine, when their bites are so deadly? Both snake and staff logos have roots in ancient Greek mythology but they reference different sources. Let’s look into the history of each motif to find out more.

The Single Snake and Staff Is From Asclepius

The logo featuring a snake coiled around a staff comes from Asclepius, the ancient Greek god of medicine and healing. We often call it the Aesculapian rod. Ancient Greeks revered Asclepius for his amazing skills in healing and medicine. According to Greek myth, he could restore health and even bring the dead back to life! Throughout his life Asclepius had a close connection to snakes, so they became his universal symbol. Ancient Greeks believed snakes were sacred beings with healing powers. This was because their venom had remedial powers, while their ability to shed their skin seemed like an act of regeneration, rebirth and renewal. So, it makes sense that their god of healing is to this amazing animal.

He Learned Healing Powers From Snakes

According to Greek mythology, Asclepius learned some of his healing powers from snakes. In one story, he deliberately killed a snake, so he could watch as another snake used herbs to bring it back to life. From this interaction Asclepius learned how to revive the dead. In another story, Asclepius managed to save a snake’s life, and to say thanks, the snake quietly whispered its healing secrets into Asclepius’s ear. Greeks also believed Asclepius had the ability to heal people from a deadly snakebite. There were a lot of snakes in ancient Greece, so this skill came in pretty handy.

The Winged Snake and Staff Logo Is From Hermes

The second snake and staff logo features two twirling snakes and a pair of wings above them. it is called a Caduceus. The staff in the center belonged to Hermes, the messenger between the gods and the humans. The wings are a reference to Hermes’s ability to fly between the heavens and the earth. According to one myth, the Greek god Apollo gave Hermes the staff. In another myth, it was Zeus who gave Hermes the Caduceus, surrounded by two swirling white ribbons. When Hermes used the staff to separate two fighting snakes, they coiled around his staff in perfect harmony, replacing the ribbons and creating the famous logo.

Unlike Asclepius, Hermes wasn’t actually able to heal or bring anyone back to life, but his snake and staff logo still became a popular medical symbol. This was possibly because a group of 7th century alchemists who claimed to be the sons of Hermes adopted his logo, even though their practice was more concerned with the occult rather than actual medical healing. Later, the U.S. Army adopted Hermes’s logo for their medical corps, and various subsequent medical organizations followed their lead.

It is also possible that somewhere along the line Hermes’s Caduceus was simply confused with the Aesculapian rod, and the confusion was passed down through history. More recently, the Aesculapian rod has become the more common medical symbol, although Hermes’s Caduceus does still pop up from time to time, and it’s a pretty striking and instantly recognizable logo, as you can see in the U.S. Army memorabilia.