HomeAncient HistoryThe 7 Most Important Prehistoric Cave Paintings in the World

The 7 Most Important Prehistoric Cave Paintings in the World

Prehistoric cave paintings are vivid and mysterious survivals from some of humanity’s oldest art. Here are seven of the most fascinating. 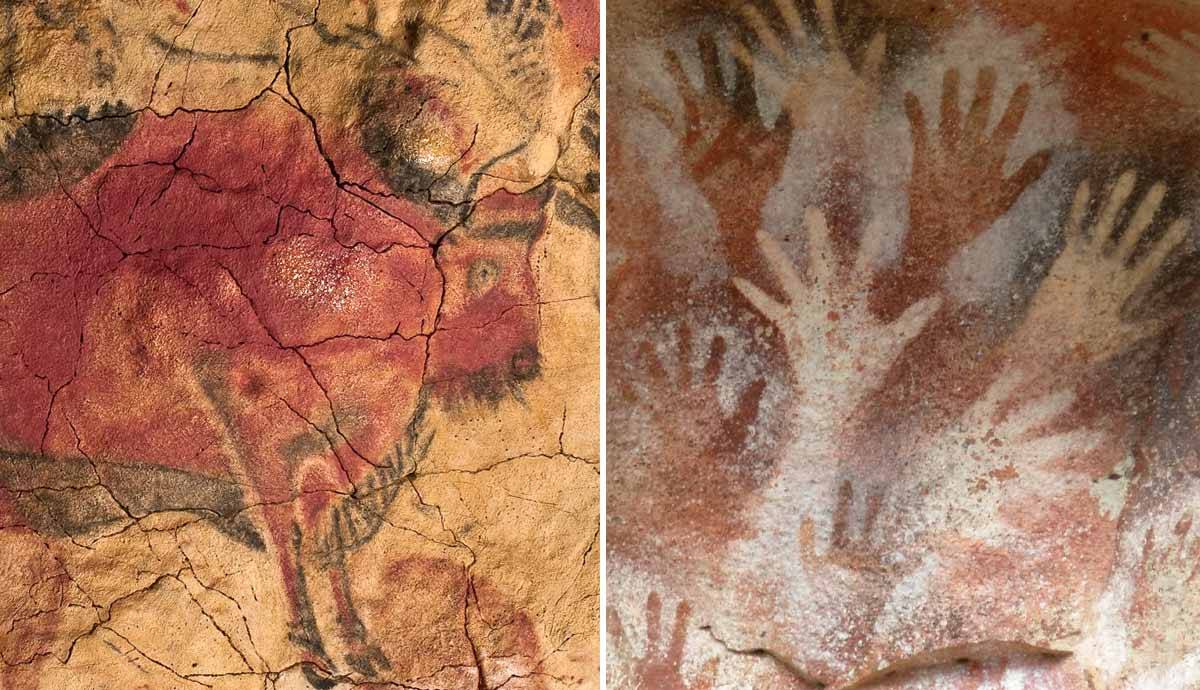 From their earliest rediscoveries in 19th-century Europe to a game-changing find in 21st-century Indonesia, prehistoric rock art (paintings and carvings on permanent rock locations like caves, boulders, cliff faces, and rock shelters) are some of the world’s most fascinating artworks. They represent the earliest surviving evidence of the artistic instinct in early humanity and have been found on nearly every continent.

Despite differing from place to place — we should not assume that all prehistoric cultures were identical — rock art often features stylized animals and humans, handprints, and geometric symbols engraved into the rock or painted in natural pigments like ochre and charcoal. Without the assistance of historical records for these early, pre-literate societies, understanding rock art is a great challenge. However, hunting magic, shamanism, and spiritual/religious rituals are the most commonly proposed interpretations. Here are seven of the most fascinating cave paintings and rock art sites from around the world.

The rock art at Altamira, Spain was the first in the world to be recognized as prehistoric artwork, but it took years for that fact to become a consensus. Altamira’s first explorers were amateur archaeologist, including a Spanish nobleman Marcelino Sanz de Sautuola and his daughter Maria. In fact, it was 12-year-old Maria who looked up at the cave’s ceiling and discovered a series of large and lively bison paintings.

Many other lifelike animal paintings and engravings were subsequently found. Don Sautuola had vision enough to correctly connect these grand and sophisticated cave paintings with small-scale prehistoric objects (the only prehistoric art known at that time). However, the experts didn’t initially agree. Archaeology was a very new field of study at the time and had not yet gotten to the point where prehistoric humans were considered capable of making any kind of sophisticated art. It wasn’t until similar sites started being discovered later in the 19th century, primarily in France, that experts finally accepted Altamira as a genuine artifact of the Ice Age.

Discovered in 1940 by some kids and their dog, the Lascaux caves represented the motherlode of European rock art for many decades. French priest and amateur prehistorian Abbé Henri Breuil termed it “the Sistine Chapel of Prehistory”. Despite being surpassed by the 1994 discovery of Chauvet cave (also in France), with its stunning animal depictions dated to more than 30,000 years ago, the rock art at Lascaux is still probably the most famous in the world. It owes that status to its vivid representations of animals like horses, bison, mammoths, and deer.

Clear, graceful, and forcefully expressive, they often appear on a monumental scale, especially in Lascaux’s well-known Hall of Bulls. Each one almost seems capable of movement, a sense probably enhanced by their position on undulating cave walls. Clearly, these prehistoric painters were masters of their art form. Their impact comes across even through virtual tours of the reproduced caves. There is also a mysterious human-animal hybrid figure, sometimes called “bird man”. His connotations remain elusive but may relate to religious beliefs, rituals, or shamanism.

Unlike Altamira, the Lascaux caves got positive public attention from the very beginning, despite being discovered in the middle of World War Two. Unfortunately, several decades of heavy visitor traffic endangered the paintings, which survived for so many millennia by being protected from human and environmental factors inside the caves. That’s why, like many other popular rock art sites, the Lascaux caves are now closed to visitors for their own protection. However, high-quality replicas on the site admit tourists.

Rock art abounds in Africa, with at least 100,000 sites discovered from prehistory through to the 19th century, but it has thus far been badly under-studied. Despite this, there have been some great finds which is unsurprising when you consider that Africa is thought to be the origin of all humanity. One such find is the Apollo 11 cave stones, found in Namibia. (Don’t get any funny ideas, the Apollo 11 stones did not come from outer space. They got that name because their initial discovery coincided with the Apollo 11 launch in 1969.) These paintings are on a set of granite slabs detached from any permanent rock surface. There are seven small slabs in total, and together they represent six animals drawn in charcoal, ochre, and white pigment. There is a zebra and rhino alongside an unidentified quadruped in two pieces and three more stones with faint and indeterminate imagery. They have been dated to about 25,000 years ago.

Other key African finds include the Blombos Cave and the Drakensburg rock art sites, both in South Africa. Blombos does not have any surviving rock art but it has preserved evidence of paint and pigment making — an early artist’s workshop — dating as far back as 100,000 years ago. Meanwhile, the Drakensburg site contains countless human and animal images made by the San peoples over thousands of years until they were forced to abandon their ancestral lands relatively recently. Projects like the Trust for African Rock Art and the African Rock Art Image Project at the British Museum are now working to record and preserve these ancient sites.

Humans have lived in the area that is now Kakadu National Park, in the Arnhem Land region of Australia’s northern coast, for about 60,000 years. The surviving rock art there is 25,000 years old at most; the last painting before the area became a national park was made in 1972 by an aboriginal artist named Nayombolmi. There have been different styles and subjects in different periods, but the paintings often employ a mode of representation that has been termed the “X-Ray Style”, in which both external features (such as scales and face) and internal ones (like bones and organs) appear on the same figures.

With such an incredibly long history of art, Kakadu presents some fantastic evidence for a millennia of climate change in the area — animals now extinct in the area appear in the paintings. A similar phenomenon has been observed in places like the Sahara, where plants and animals in rock art are relics of a time when the area was lush and green, and not a desert at all.

Rock art is particularly plentiful in Australia; one estimate suggests 150,000-250,000 possible sites across the country, especially in the Kimberley and Arnhem Land regions. It remains a significant component of indigenous religion today, especially as they relate to the essential aboriginal concept known as “the Dreaming”. These ancient paintings continue to have great spiritual power and significance for modern indigenous peoples.

5. The Lower Pecos Rock Art in Texas and Mexico

Despite being quite young by prehistoric standards (the oldest examples are four thousand years old), the cave paintings of the Lower Pecos Canyonlands on the Texas-Mexico border have all the elements of the best cave art anywhere in the world. Of particular interest are the many “anthropomorph” figures, a term researchers have given to the heavily stylized human-like forms that appear throughout the Pecos caves. Appearing with elaborate headdresses, atlatls, and other attributes, these anthropomorphs are believed to depict shamans, possibly recording events from shamanic trances.

Animals and geometric symbols appear as well, and their imagery has been tentatively linked to myths and customs from the native cultures of the surrounding areas, including rituals involving hallucinogenic Peyote and Mescal. However, there is no definitive evidence that the cave painters, termed the Peoples of the Pecos, subscribed to the same beliefs as later groups, as links between the rock art and current indigenous traditions are not as strong here as those sometimes found in Australia.

Handprints or reverse handprints (bare rock hand silhouettes surrounded by a cloud of colored paint disbursed via blowpipes) are a common feature of cave art, found in a multitude of locations and time periods. They often appear alongside other animal or geometric imagery around the world. However, one site is especially famous for them: Cueva de las Manos (the Cave of Hands) in Patagonia, Argentina, which contains about 830 handprints and reverse handprints together with representations of people, llamas, hunting scenes, and more in a cave within a dramatic canyon setting.

The paintings have been dated as far back as 9,000 years ago. Images of the Cueva de las Manos, with colorful handprints covering every surface, are dynamic, fascinating, and rather moving. Calling to mind a hoard of excited schoolchildren all raising their hands, these shadows of ancient human gestures seem to bring us even closer to our prehistoric ancestors than other examples of painted or engraved rock art elsewhere.

In 2014, it was discovered that rock art paintings in the Maros-Pangkep caves on the Indonesian island of Sulawesi date to between 40,000 – 45,000 years ago. Depicting animal forms and handprints, these paintings have become contenders for the title of oldest cave paintings anywhere.

In 2018, human and animal paintings of roughly the same age were found in Borneo, and in 2021, a painting of a native Indonesian warty pig in the Leang Tedongnge cave, again in Sulawasi, came to light. It is now considered by some to be the oldest known representational painting in the world. These 21st-century finds have been the first to make scholars get serious about the possibility that humanity’s first art was not necessarily born in the caves of western Europe.