Dogs in ancient Egypt played a paramount role in their owners’ lives. They were guards, pets, and symbols of the gods. The dog was then, as now, man’s best friend. 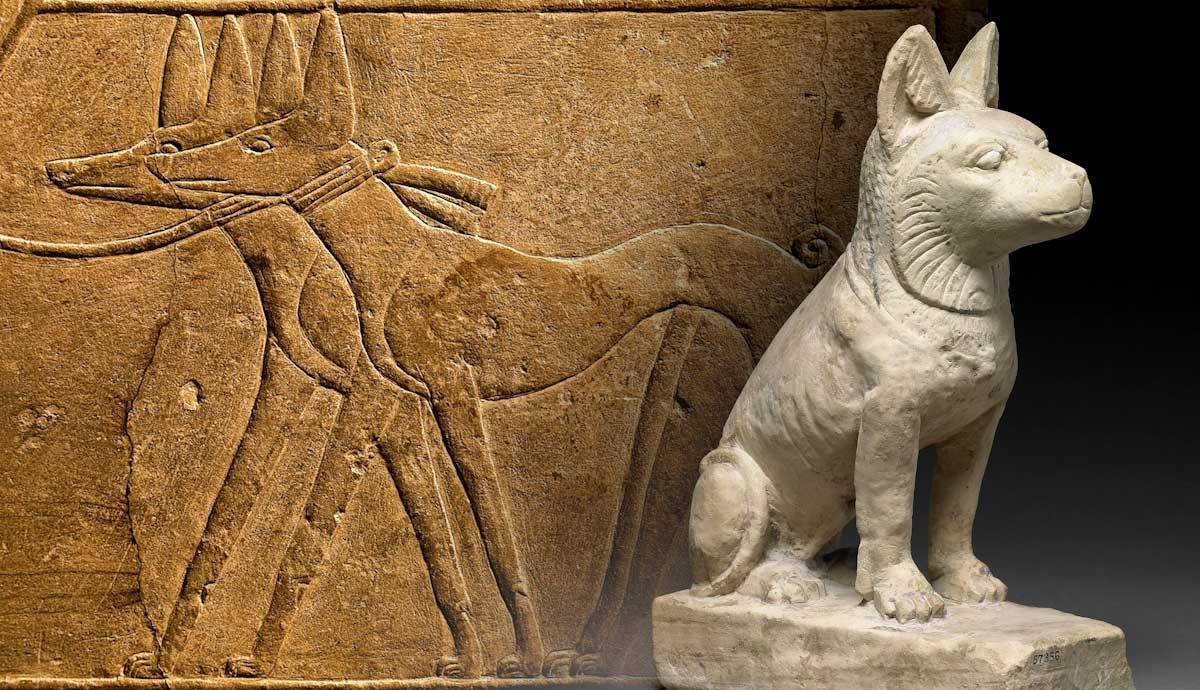 Like their modern counterparts, dogs in ancient Egypt were considered “man’s best friend”. This is unsurprising as the dog was the first domesticated animal, living by man’s side since ca. 23,000 BCE. The ancient Egyptians recognized their versatile role, using the faithful canine as a watchdog, a helper during the hunt, or as a household pet. The human-dog bond extended beyond this world into the afterlife. Mummified dogs were buried with their owners or sometimes in their own coffins. In addition, dogs occupied an important place in ancient Egyptian religion. The animal was associated with Anubis, the god of death, mummification, and the afterlife, usually depicted as a canine or a man with a canine head.

Dogs in Ancient Egypt: The First Animals Domesticated in the Nile Valley

Ancient Egyptian dogs played an essential role in the development of civilization in the Nile valley. Egyptians domesticated animals such as cattle, sheep, goats, and pigs in the Pre-Dynastic Period (ca. 6000 – ca. 3150 BCE), but it seems that the dog was a companion for the ancient Egyptians even before there was an Egypt. The domestication of the dog happened in different ways, in different locations.

Some dogs arrived from the Middle East, where they were domesticated around 10,000 BCE. Others followed their owners, who came to the Nile valley from North Africa, searching for more favorable living conditions. The herders and hunters of the Sahara frequently depicted dogs on rock overhangs, which they used as shelter. The ancient Egyptians also domesticated the jackal — the African wolf — by sharing excess meat with wild animals who roamed the outskirts of early settlements in search of food.

In ancient Egypt, dogs are attested as early as the Naqada period, based on the physical evidence from graves, inscriptions, and wall paintings. Bones of the first dogs have been found at Merimde, one of the earliest Egyptian sites in the West Nile Delta. One of the earliest representations of the close association between the human and his canine companions comes from a pottery dish from the Pre-Dynastic Period (ca. 4000 BCE) showing the handler accompanied by four hunting dogs, each on their own leash.

Two Words for Many Breeds

While dogs are depicted in many Egyptian artworks, ranging from pottery to tomb paintings and statues, their breed is difficult to discern. Perhaps that is why the ancient Egyptians, rather than having specific breed names, employed two words for all domesticated canines: iwiw for “barking dog” and tesem for “barkless dog,” or hunting hounds.

Based on the visual evidence, dogs in ancient Egypt came in seven distinct kinds: the Basenji, the Greyhound, the Ibizan, the Pharaoh, the Saluki, the Whippet, and the Molossian. The latter originated from Greece and were renowned as the war dog of the ancient world. The others were North African breeds, predominantly nimble and sleek animals, used as hunting dogs for both small and large game, and used as guard dogs and household pets. In addition, the so-called “pariah dogs”, wild canines and strays of mixed breed, often hunted around the outskirts of a settlement or necropolis.

The Divine Creatures: Beloved of Anubis

The “pariah dogs” traveled in packs and scavenged for food, even digging in graveyards in search of bones. Perhaps for that very reason, the ancient Egyptians began to bury their dead in tombs and introduced dogs into the tenets of their religion. The Basenji, the Greyhound, the Ibizan, and a jackal, inspired the image of Anubis, the protector of graveyards and tombs. Anubis is depicted as a human figure with a dog/jackal head or as a canine, and was one of the principal gods of the dead. Anubis guided the souls of the deceased to Osiris and the afterlife (if they passed “the judgment”, over which Anubis also presided).

Like the cat, another popular animal in ancient Egyp, dogs were considered divine vessels — intermediaries between the mortals and gods. The cult center of Anubis, called Cynopolis (“City of the Dog,”) was filled with canines who freely roamed the temple and the streets. After their death, they would be sacrificed to gain the god’s favor. But, as the death rate of temple dogs was insufficient, the priesthood created a kind of puppy mill for the sole purpose of breeding dogs for ritual sacrifice to Anubis. While to us, this may seem heartless, ancient Egyptians believed that these dogs were going straight up to meet Anubis, thus going off to a better place.

The Dog in Ancient Egypt: A Favorite Companion

While the ancient Egyptians ritually sacrificed millions of dogs to appease Anubis, the unsanctioned killing of a dog carried severe penalties. Further, if the dog was collared and owned by a person, it was considered a capital crime, punished by death. As Anubis was the god of death, the offender would be tormented even after his demise. As in the case of cats, the passing of a family dog provoked the same grief as for a human, and family members would shave their eyebrows to mourn the departed canine.

Dogs in ancient Egypt were always named, their names written on their collars. Preserved leather collars and depictions on frescoes, stelae, and reliefs include names that reflect individual dogs’ qualities, as well as terms of endearment, and descriptions of color: Brave One, Reliable, Healthy, Grabber, North-Wind, Good Herdsman, Antelope, Blacky, and even “Useless”. Both commoners and aristocrats adored dogs, including the pharaohs. The dog Abuwtiyuw (or Abutiu), who died before 2280 BCE, was a royal guard dog who received an elaborate ceremonial burial in the Giza Necropolis at the behest of an unknown pharaoh.

A dog’s role during its life continued in the afterlife. For that very reason, the ancient Egyptians mummified their canine companions and buried them in their own coffins, often elaborately decorated. Indeed, the ancient Egyptians loved their dogs. Numerous tomb scenes depict both pet and hunting dogs next to their masters, sitting patiently under chairs or accompanying them on the hunt. Even after the Roman annexation of Egypt, dogs kept their special place as “man’s best friend” in the land of the Pharaohs and beyond, faithfully staying by our side.

Predynastic Egypt: What Was Egypt Like Before the Pyramids? (7 Facts)

Why Does Everyone Look the Same in Ancient Egyptian Art?