Alexander the Great was more than a conqueror. He was also a builder who founded more than twenty cities bearing his name, from Egypt to India. 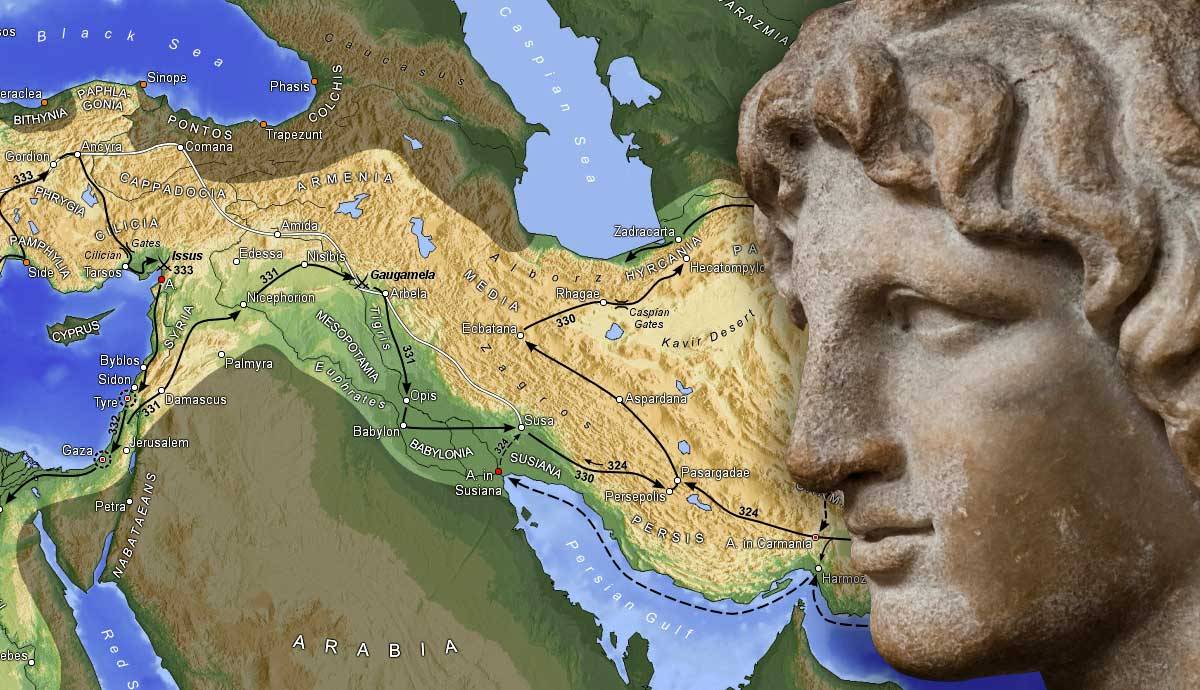 By his own admission, Alexander the Great endeavored to reach the “ends of the world and the Great Outer Sea”. During his brief but eventful reign, he managed to do just that, creating a vast Empire that stretched from Greece and Egypt all the way to India. But the young general did more than simply conquer. By settling Greek colonists in conquered lands and cities, and encouraging the spread of Greek culture and religion, Alexander laid a strong foundation for establishing a new, Hellenistic civilization. But the young ruler was not satisfied with mere cultural change. Before his untimely death, Alexander the Great reshaped the landscape of his enormous Empire by founding more than twenty cities that bore his name. Some still exist today, standing as witnesses to Alexander’s lasting legacy.

Alexander the Great founded his most famous city, Alexandria ad Aegyptum, in 332 BCE. Located on the shores of the Mediterranean, on the Nile delta, Alexandria was built with one purpose — to be the capital of Alexander’s new Empire. However, Alexander’s sudden death in Babylon in 323 BCE prevented the legendary conqueror from seeing his beloved city. Instead, the dream would be realized by Alexander’s favorite general and one of Diadochi, Ptolemy I Soter, who brought Alexander’s body back to Alexandria, making it the capital of the newly founded Ptolemaic kingdom.

Under Ptolemaic rule, Alexandria would thrive as the cultural and economic center of the ancient world. Its renowned Library turned Alexandria into a center of culture and learning, attracting scholars, philosophers, scientists, and artists. The city hosted magnificent buildings, including the lavish tomb of its founder, the Royal Palace, the giant causeway (and breakwater)  the Heptastadion, and most importantly, the majestic Lighthouse of Pharos — one of the Seven Wonders of the Ancient World. By the third century BCE, Alexandria was the largest city in the world, a cosmopolitan metropolis with more than a half million inhabitants.

Alexandria retained its importance following the Roman conquest of Egypt in 30 BCE. As the main center of the province, now under the direct control of the Emperor, Alexandria was one of Rome’s crown jewels. Its port hosted a massive grain fleet that supplied the imperial capital with vital sustenance. In the fourth century CE, Alexandria ad Aegyptum became one of the main centers of the burgeoning Christian religion. Yet, the gradual alienation of Alexandria’s hinterland, natural catastrophes such as the tsunami of 365 CE (which permanently flooded the Royal Palace), the collapse of Roman control during the seventh century, and the shift of the capital to the interior during Islamic rule, all led to Alexandria’s decline. Only in the 19th century did the city of Alexander regain its importance, once again becoming one of the major centers of the Eastern Mediterranean and the second most important city in Egypt.

Alexander the Great founded Alexandria ad Issum (near Issus) in 333 BCE, probably immediately after the famous battle in which the Macedonian army dealt a decisive blow to the Persians under Darius III. The city was established on the site of the Macedonian war camp on the Mediterranean coast. Located on the important coastal road linking Asia Minor and Egypt, Alexandria near Issus controlled the approaches to the so-called Syrian Gates, the vital mountain pass between Cilicia and Syria (and beyond to the Euphrates and Mesopotamia). Thus, it is not surprising that the city soon became an important trade hub, a gateway to the Mediterranean.

Alexandria near Issus boasted a large harbor located in the easternmost part of the deep natural bay, now known as the Gulf of Iskenderun. Due to its optimal geographic location, two more cities were established in the vicinity by Alexander’s Successors — Seleucia and Antioch. The latter would eventually take primacy, becoming one of the greatest urban centers of antiquity, and a Roman capital. Despite the setback, the city of Alexander, known in the Middle Ages as Alexandretta, would survive until the present day. So would the legacy of its founder. Iskenderun, the city’s current name, is the Turkish rendering of “Alexander”.

3. Alexandria (of the Caucasus): On the Edge of the Known World

In the winter/spring of 392 BCE, the army of Alexander the Great moved to eliminate the remains of the Persian army led by the last Achaemenid king. To surprise the enemy, the Macedonian army made a detour through present-day Afghanistan, reaching the valley of the Cophen River (Kabul). This was an area of immense strategic importance, the crossroads of the ancient trade routes that linked India in the East with Bactra in the northwest and Drapsaca in the northeast. Both Drapsaca and Bactra were part of Bactria, a key province in the Achaemenid Empire.

This was the place where Alexander decided to found his city: Alexandria on the Caucasus (the Greek name for the Hindu Kush). The town was, in fact, refounded, as the area had already been occupied by a smaller Aechemenid settlement called Kapisa. According to ancient historians, some 4,000 native inhabitants were allowed to stay, while 3000 veteran soldiers joined the city’s population.

More people arrived in the decades that followed, transforming the town into a center of commerce and trade. In 303 BCE, Alexandria became a part of the Mauryan Empire, along with the rest of the region. Alexandria entered its golden age with the arrival of its Indo-Greek rulers in 180 BCE when it was one of the capitals of the Greco-Bactrian Kingdom. Numerous finds, including coins, rings, seals, Egyptian and Syrian glassware, bronze statuettes, and famous Begram ivories, testify to Alexandria’s importance as the place that linked the Indus Valley with the Mediterranean. Nowadays, the site lies near (or partially under) the Bagram Airforce base in eastern Afghanistan.

4. Alexandria Arachosia: The Town in the Riverlands

Alexander the Great’s conquest took the young general and his army far from home, to the easternmost borders of the dying Achaemenid Empire. The Greeks knew the area as Arachosia, meaning “rich in waters/lakes.” Indeed, several rivers crisscrossed the high plateau, including the river Arachotus. This was the place wherein the closing weeks of the winter of 329 BCE, Alexander decided to leave his mark and establish a city bearing his name.

Alexandria Arachosia was (re) founded on the site of the sixth-century BCE Persian garrison. It was a perfect location. Located at the junction of three long-distance trade routes, the site controlled access to a mountain pass and the river crossing. After Alexander’s death, the city was held by several of his Diadochi until, in 303 BCE, Seleucus I Nicator gave it to Chandragupta Maurya in exchange for military aid, including 500 elephants. The city was later returned to the Hellenistic rulers of the Greco-Bactrian Kingdom, which controlled the area until c. 120–100 BCE. Greek inscriptions, graves, and coins testify to the city’s strategic importance. Nowadays, the city is known as Kandahar in modern-day Afghanistan. Interestingly, it still bears the name of its founder, derived from Iskandriya, the Arabic and Persian rendering of “Alexander.”

5. Alexandria Oxiana: Alexander the Great’s Jewel in the East

One of the most important and best-known Hellenistic cities in the East, Alexandria Oxiana, or Alexandria on the Oxus (modern-day Amu Darya River), was founded probably in 328 BCE, during the last stage of Alexander the Great’s conquest of Persia. It is possible that this was a re-foundation of an older, Achaemenid settlement and that it was, as in the other cases, settled by army veterans who mixed with the native population. In the centuries that followed, the city would become the easternmost bastion of Hellenistic culture and one of the most important capitals of the Greco-Bactrian Kingdom.

Archaeologists identified the site with the ruins of the city of Ai-Khanoum on the modern-day Afghan – Kyrgyz border. The site was modeled on a Greek urban plan and filled with all the hallmarks of a Greek city, such as a gymnasium for education and sports, a theatre (with a capacity for 5000 spectators), a propylaeum (a monumental gateway complete with Corinthian columns), and a library with Greek texts. Other structures, such as the royal palace and temples, show the melding of eastern and Hellenistic elements, characteristic of the Greco-Bactrian culture. The buildings, lavishly decorated with elaborate mosaics, and art pieces of exquisite quality, testify to the city’s importance. The town was, however, destroyed in 145 BCE, never to be rebuilt. Another candidate for Alexandria Oxiana might be Kampir Tepe, located in modern-day Uzbekistan, where archeologists have found Greek coins and artifacts, but the site lacks typical Hellenistic architecture.