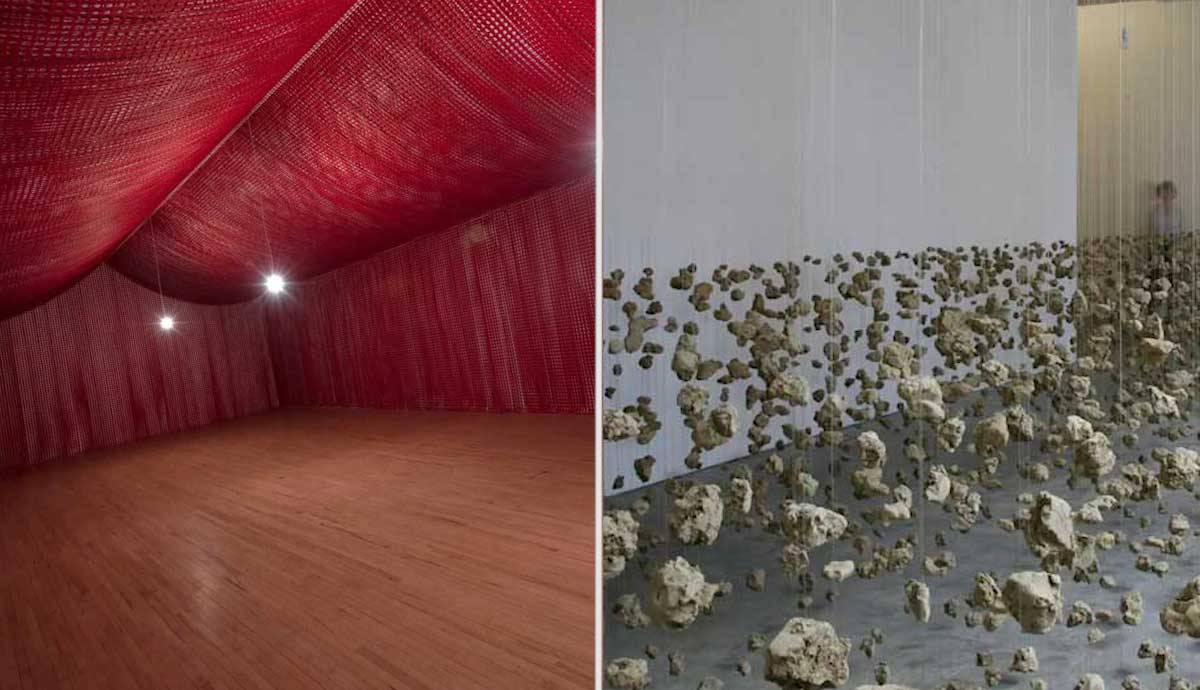 Cornelia Parker was born in 1956 in Cheshire. She studied at Gloucester College of Art, Wolverhampton College of Art, and Reading University, and she is best known for her elaborate installations. The English artist uses various materials to create pieces that usually occupy a lot of space, which is characteristic of installation art. The viewer becomes part of the artwork by walking around it, walking through it, and experiencing the environment as a whole. Parker creates artworks that make it seem as if the piece is floating or as if time was frozen. Here are 8 examples of her astonishing installation art.

The work Cold Dark Matter: An Exploded View is made from the remains of an explosion. With the help of the British Army, Cornelia Parker blew up a garden shed and created an installation with the fragmented pieces. She hung them from the ceiling in a meticulous arrangement to simulate the exact moment of the explosion. The work is only lit by a single lightbulb at the center, which generates various shadows. The shadows integrate themselves into the exhibition space and the artwork itself.

For Parker, the visuals of an explosion are iconic images that accompany us throughout our entire lives. She observed their visibility in comics, action movies, documentaries about stellar explosions, and reports about wars. The artist was intrigued by the idea of preserving a fleeting moment through an artwork, therefore making something that is only visible for a few seconds last for a longer period of time.

The categories of objects used in the installation vary greatly. By stepping closer to the artwork, things like children’s toys, a horseshoe, tools, and books become visible. Some of the objects belong to Parker, but she obtained most of them from friends or car boot sales.

The installation Thirty Pieces of Silver consists of several disc-shaped groups which each contain 30 pieces of silver. The groups encompass objects such as plates, candlesticks, spoons, cigarette cases, and trombones. The objects were all crushed with a steamroller and subsequently arranged in a symmetrical order with hundreds of wires. The piece’s title suggests a connection to the biblical story in which Judas betrayed Jesus in exchange for 30 pieces of silver. Cornelia Parker said that the title’s biblical reference alludes to money, betrayal, death, and resurrection.

For the artist, silver pieces have a commemorative meaning. Silverware is often handed down from one generation to the next and a piece of silver jewelry can be an important family heirloom. Parker wanted to change the meaning of the individual objects and transform them into something with a different worth, meaning, and appearance. The desire to crush metallic objects apparently manifested itself in Cornelia Parker’s early life. When she was a child, she would crush coins on a railway track. After that, the piece would have no monetary value, but it would be a testament to what Parker called the destructive powers of the world.

The work Neither From Nor Towards is made of bricks that once were part of a row of houses but then fell off the White Cliffs of Dover. Cornelia Parker found them on a shoreline between Folkestone and Dover and assembled them to look like they were falling down or climbing up in a perfectly ordered carpet-like formation. This poses the question of whether the title is a reference to the artwork’s movement. Since it is indiscernible if the bricks are falling down or moving upwards, the title tells us that they come neither from a direction nor towards one.

With the help of barely visible wires, the bricks are attached to the ceiling, which creates the impression that they are magically floating in the air. The destruction of the houses that once were made of these bricks was caused by coastal erosion and climate change. The curator of the 2022 Cornelia Parker exhibition at the Tate, Andrea Schlieker said that the work emphasizes the effects of climate change.

For her artwork called Mass, Cornelia Parker used the charcoaled remains of a white-congregation church that was struck by lightning. She then heard about how black-congregation churches were destroyed by arson and wanted to make another piece. Years later, the artist read about racist bikers who burnt down a Baptist church in Kentucky, and she made another work. She used an exhibition at the Yerba Buena Arts Center in San Francisco as an opportunity to display the two works as a diptych. This way, it seemed as if the destroyed churches were resurrected. She compared the work to three-dimensional black charcoal drawings that create a contrast due to their dark color and the white walls of the exhibition space.

Like many of her other works, Subconscious of a Monument explores themes such as gravity and the use of found materials. It consists of 7800 clods of dried clay that were removed from the foundations of the Leaning Tower of Pisa in Italy. When engineers found a solution to reduce the tilt of the well-known tower by extracting soil underneath the monument, Cornelia Parker asked if she could have some of the extracted clay. The tower was saved from collapsing and Cornelia Parker was able to make her impressive installation. The title perfectly captures the meaning of a material that was once located under the ground of such an important building. The former chief curator of the Museum of Contemporary Art Australia compared the work to an asteroid belt or space rock.

The ominous-looking house of Cornelia Parker’s Transitional Object (PsychoBarn) references the works of two popular artists: Alfred Hitchcock and Edward Hopper. The house with the Victorian architecture shown in Edward Hopper’s painting House by the Railroad is said to have been the inspiration for the house of Alfred Hitchcock’s film Psycho. Parker used both works as an inspiration for her colossal Transitional Object. Another influence was the classic American red barn. Parker said that the Dutch red barn is an essential part of the American landscape.

The artist intended to create an ambiguous atmosphere with the piece. When the viewer looks at the work they can see a red barn, which represents something positive and pleasant, as well as the house from Psycho, which usually has the opposite effect. By simultaneously referencing two buildings with very contrary visual messages, the piece explores the polarities of good and evil.

The work’s title is an allusion to a term from the field of psychology. A transitional object is used to comfort a child and to take the place of the mother. This object could for example be a blanket or teddy bear. The title, therefore, references the sinister mother-son relationship portrayed in the movie Psycho.

The construction is nearly 30 feet high. It was exhibited on the roof of the Metropolitan Museum of Art in 2016. Three years later, the PsychoBarn could be seen in the Annenberg Courtyard of the Royal Academy in London. The work isn’t actually a real building, but a scaled-down construction with only two facades.

When Cornelia Parker visited a factory in Kent that produced paper poppies for Remembrance Day, she had the idea for her installation War Room. During Remembrance Day, Britain and the Commonwealth countries commemorate British service members who died in the line of duty since World War I. It takes place in November and many people wear paper poppies. Over 40 million paper poppies are produced each year from rolls of red paper. They are punched from the rolls, which Parker used to create her War Room.

Through the draped arrangement, the exhibition space resembles a large tent, or a room decorated with dark red curtains. The holes in the paper represent the many lives that were lost during wars and other military conflicts. The installation was first exhibited at the Whitworth in Manchester and later recreated for a retrospective of Parker’s work at Tate in 2022.

Parker’s Island consists of a greenhouse stained with paint made from the chalk of the White Cliffs of Dover. The construction’s floor was created from Victorian tiles that once made up the floor in the Palace of Westminster. In 2017, Cornelia Parker was named an election artist, which means that she observed the election and then produced an artistic interpretation of it. While Parker worked as an election artist, she saw that the tiles were being removed and she asked if she could keep some of them, just like she did with her piece Subconscious of a Monument. The tiles have historic significance since politicians like Winston Churchill and Margaret Thatcher once walked on them. By turning them into art, Cornelia Parker saved the tiles from being crushed into dust.

Island has a political meaning that Parker explains in a wall text she wrote for the piece. The work’s title represents the island of Great Britain, which she describes as being alienated from Europe due to Brexit. Parker also mentions the impacts of climate change. The text ends on a somber note as she writes: “with crumbling coastlines and rising sea levels, things seem very precarious.”