Spanish vanitas paintings are part of the vanitas trend that fascinated early modern Europe. They warn the viewer against the futile character of earthly riches and imminent death. 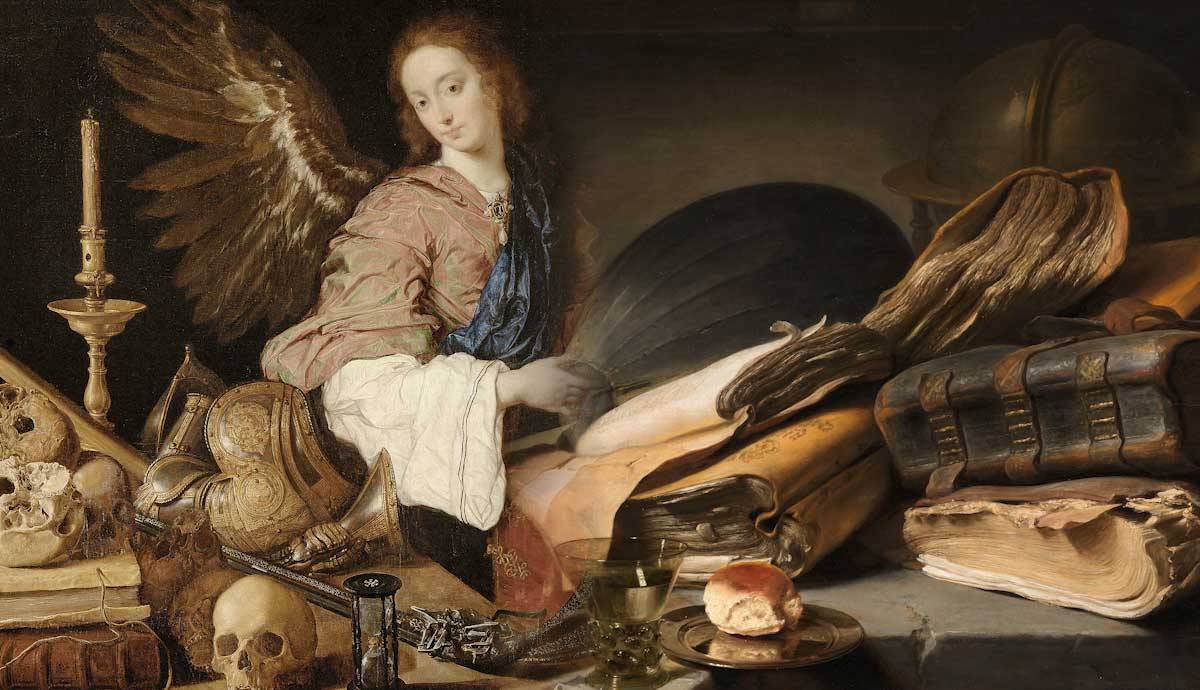 The vanitas theme fascinated Europe throughout the centuries, but its popularity peaked during the seventeenth century. Just like the vanitas still-life works from other regions, the Spanish vanitas is heavily influenced by the Dutch and Flemish model, on the one hand, and by the political and religious climate, on the other hand. Being produced at a time when the Spanish Golden Age was coming to an end, these paintings announce the decline of Spain’s power on the early modern European scene. The message is the same: all earthly riches are fleeting and mean nothing in the face of death.

Spanish Vanitas: Part of a Common Theme in Europe

Vanitas paintings were very popular in Europe from the late Middle Ages to the eighteenth century. The theme is closely related to the earlier visual tradition of memento mori, translated from Latin as “remember that you will die.” Both themes are intended to make viewers think about their own mortality and the fleeting character of life and existence in general. The message of memento mori began appearing on the backside of paintings in fifteenth-century Europe. The paintings feature skulls and sometimes show various mottos relating to the two themes.

If someone is depicted in a vanitas painting, they must be reminded that even though they wish for their appearance to be immortalized, only their soul will survive death. Therefore, one has to take care of their soul and work toward salvation. As mentioned, both themes were very popular in Europe and took various forms. This is also the case for Catholic Spain, which explored the vanitas theme in still life and other moral compositions that feature penitent saints contemplating mortality and the feebleness of life.

The way in which the vanitas theme is manifested in each European region is influenced in part by the political climate. Such is the case with Spain, where most of the production of such artworks can be centered in the seventeenth century when Habsburg Spain was at the height of its cultural power. However, from a political and economic perspective, the Spanish Habsburgs were facing difficulties that eventually led to losing their European influence.

Spanish vanitas paintings flourished as part of the Spanish Golden Age, a period of prosperity and cultural renewal manifested in all types of art. The Golden Age can be placed roughly between the late fifteenth century and the voyages of Columbus, ending around 1659 with the Treaty of the Pyrenees, which concluded the Franco-Spanish War (1635-1659). Spanish vanitas still-lifes developed and flourished during the last part of the Golden Age, witnessing thus the inevitable demise of prosperity. This realization is also expressed visually through the messages of the paintings.

A very well-known work of this genre of vanitas still-life is that of Antonio de Pereda, entitled Allegory of Transience, which depicts precisely the fall of the Spanish Habsburgs. In the painting, an angel holds in their hand a cameo portrait of Emperor Charles V, gesturing with the other hand to the globe nearby to express the once-great expansion of the Habsburg Empire, which, almost a century after the emperor’s death, is divided and on the brink of ruin. Skulls surround the lavish armor and sophisticated weapons on the table to indicate that military endeavors are pointless. Even if one builds an empire of the great extent and influence as that of the Spanish emperors, it will be ruined one day and disappear eventually, as all earthly things do.

As it can be seen, this still life is deeply rooted in the Spanish political situation of the time, expressing both a particular lesson and a more universal one. If an empire can’t last, the lives and projects of individuals are even less likely to last. Even though the Spanish Habsburgs were devout Catholics, it was God’s will that all earthly things should perish at some point, as only the divine empire that is God’s is eternal.

In the Blink of an Eye

Another emblematic work for the Spanish vanitas still-life genre is the painting In ictu oculi by Juan de Valdés Leal. The title is taken from a Latin expression that means “in the blink of an eye.” One possible source of this expression is 1 Corinthians 15:52 in the Bible: In momento, in ictu oculi, in novissima tuba, translated as “In a moment, in the twinkling of an eye, at the last trumpet.” The context of the Bible passage is that whatever can be found alive on earth will die in the blink of an eye but will also be resurrected when the last trumpet sounds. This, of course, is a reference to the Apocalypse and the promise of eternal life as connected to the Last Judgement.

The painting features a skeleton in its center, while on the floor lies an open coffin. Besides the coffin, there are various symbols of earthly power and knowledge. The skeleton extinguishes a candle, a classic symbol of the ephemerality of life. The candle is a popular symbol throughout all European vanitas still-life works, used to depict the transient character of existence. Life gets extinguished one way or the other, just like a candle. In this painting, the skeleton doesn’t represent any particular individual but Death itself, borrowing thus from the motif of danse macabre. The skeleton here is the one that initiates the death of the individual by extinguishing the candle.

This painting, along with In ictu oculi, is part of the two paintings by the artist Juan de Valdés Leal, painted for the Charity Hospital of Seville. The other painting of the pair is titled Finis gloriae mundi and shares the same theme of vanitas. Subtler in its depiction, without representing a skeleton, the painting is easy to miss when looking for examples of Spanish vanitas paintings. However, on closer inspection, it becomes clear that the theme of vanities is certainly present. At the base of the painting, the viewer is greeted by two open coffins. This time, instead of an empty coffin like in the other painting, these two are inhabited by a knight and a bishop. Their dry corpses are visible as they lay side by side, each in their respective clothing. Above them, a hand descends from the sky, holding a scale. On the scale, earthly riches are almost on equal footing with Church offices and knowledge.

The message is quite clear: chasing after military power and renown, such as that of a knight, is equal to chasing after knowledge and Church offices in God’s eyes. The destiny is the same for both the bishop and the knight. They both end up dead in a coffin where their achievements mean nothing, as they don’t make any difference in the end.

This is a very telling choice of representations if it’s connected to the climate of the Catholic Spanish Habsburgs. In Spain, the Church and the Habsburgs had the highest earthly influence one could achieve on earth. As an individual, one could choose to chase fame and power by either serving the Habsburgs as a knight or by serving the Church as a bishop.

As can be seen so far, the most famous Spanish vanitas still-life paintings make direct reference to the political and geopolitical situation of Spain and its rulers. It can even be posited that the main focus of these paintings is not necessarily religious, as they don’t advise piety and praying. Instead, they seem to focus more on warning against wasting one’s life to chase a pipe dream of political eternity. Their common message stresses the fact that even great empires are destined to fall. Therefore, chasing a status within an empire is but a disillusion as everything will just collapse one day, rendering all efforts useless.

Another telling example of precisely this is Antonio de Pereda’s painting titled The Knight’s Dream. A young man is sleeping on a chair on the left side of the painting. On the table in front of him, there are piles of valuable objects gathered. Jewelry, golden coins, musical scrolls, expensive flowers, a mask for balls, books, armor pieces, crowns, weapons, flags, and a globe are dumped in a giant pile of riches. However, on top of this pile, two skulls are placed above everything else.

To make the message even more apparent, an angel appears by the table, holding a written message meant to warn the knight. However, since the knight is asleep, he is unable to receive the warning. This is a metaphor for the divine forces that try to warn us against the futility of vanities. We, like the knight, live in a sleep-like trance and thus cannot heed the warning.

There are notable differences when comparing Spanish vanitas to their Dutch and Flemish counterparts, which are the most popular in Europe. Namely, even though Spanish vanitas paintings are still seen as still-life paintings, they also break the rule of the genre by representing figures such as angels, knights, bishops, or simply moving skeletons. On the other hand, they are still faithful to the genre because the elements that dominate most compositions are directly inspired by the model of Dutch and Flemish still-life paintings popular at the time.

The addition of the figurative element in these paintings is a result of Catholicism being the officially accepted confession in Spain. Moreover, the ruling Habsburg family was also devoutly Catholic. As expected, the figurative element is non-existent in most Dutch and Flemish paintings. This may be seen as a result of the Calvinist majority and the ideals of the Reformation that are critical of figurative depictions of divine beings. No angels carry warnings in these paintings, but the average daily objects depicted in the still-life pass on the warning. This is, of course, a notable contrast when it comes to the paintings we have seen so far, which make full use of figures that act like messengers for the viewer.

Therefore, Spanish vanitas still-life paintings represent a fascinating case of artworks that follow this European trend. By adding elements influenced by Catholicism but also emphasizing the uselessness of military power, they speak directly to Spain’s situation in the European context of the era.

Vanitas Painting or Memento Mori: What are the Differences?