HomeStoriesThe Habsburgs: From the Alps to European Dominance (Part I)

Hailing from a low house in the Alps, the Habsburgs would rule as Holy Roman Emperors, their influence stretching from Poland to Portugal. 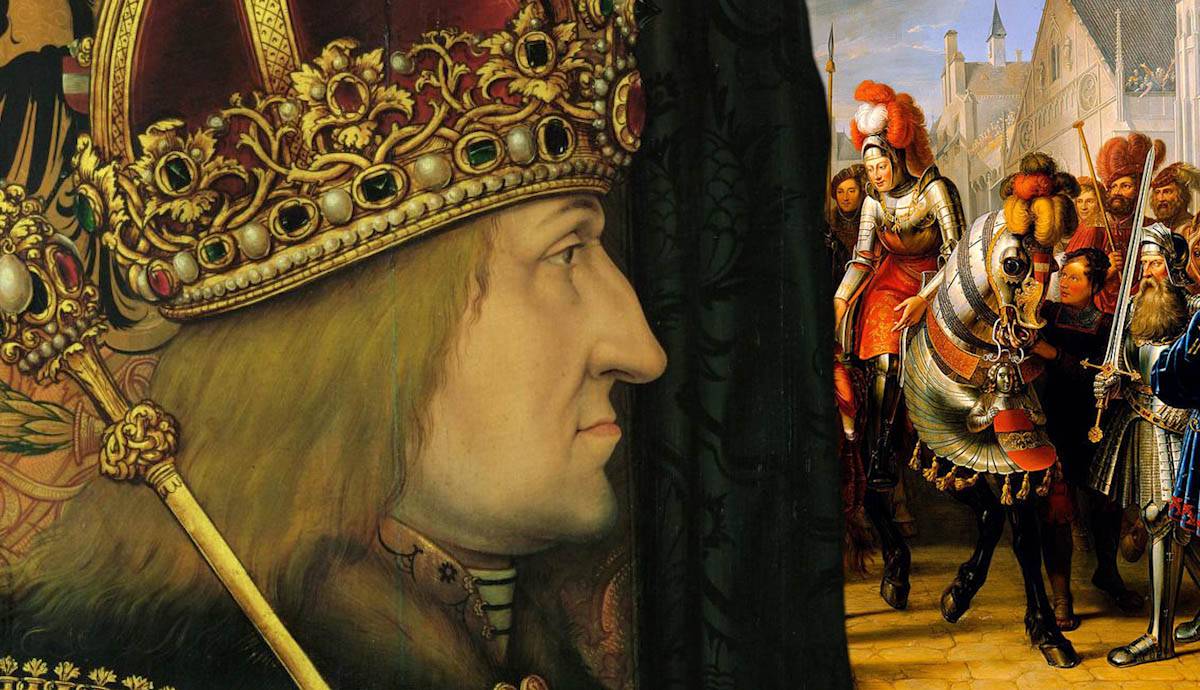 This article is a two-part series, for Part II see The Habsburgs: A Millennia-Old Dynasty (Part II)

Starting the 9th century, powerful European lords rose to prominence and played important roles in the politics of the Old Continent. This era witnessed the rise of dukes, barons, counts, and various princely houses. Among them, we can find the House of Capet, for example, from which the Counts of Worms in modern Germany rose to the Frankish throne and ruled France until 1848.

But no feudal dynasty ever reached the heights achieved by the Habsburgs. Starting as Counts of a small territory in the Alps of today’s Switzerland, they gained more and more power before eventually going on to rule the Holy Roman Empire.

The Habsburgs gained control of Hungary, Bohemia, Spain, and Portugal, alongside other minor Germanic principalities. In this first part, we will talk about the rise of the Habsburgs from a lowly house to their establishments on the thrones of many European Kingdoms.

The Early Habsburgs: The Birth of a Dynasty

Historians still debate the origins of the Habsburgs. It is commonly agreed that the dynasty was born from the Etichonid Frankish noble family. The latter supported Queen Brunhilda of Austrasia against Neustria’s Merovingian kings.

Following the queen’s defeat in 613 and the unification of all of the Franks under the rule of Dagobert I during the early 630s, the Etichonids rose to prominence and obtained the Duchy of Alsace. Later on, they were divided into various branches, including the Eberhard branch that ruled possessions in Alsace and Breisgau, modern-day Germany and France.

Radbot, Count of Kletgau, was one of the members of the Eberhard Etichonid branch. He ruled a small territory in Swabia in the modern state of Baden-Wurttemberg, near the Swiss border. By 1020, Radbot built the Habsburg Castle in Aargau in modern-day Switzerland and took its name. From that point onward, we find the House of Habsburg in historical writings.

The Habsburg Castle served as the seat of the family for the next three centuries. From there, they would establish close ties with the Hohenstaufen dukes of Swabia and help them rise to the throne of the Holy Roman Empire in 1137.

The Habsburgs’ unwavering support of the new Imperial Dynasty allowed them to gain many favors. The death of Count Werner II during the Italian Wars of Emperor Frederic Barbarossa in 1167 was rewarded by major land donations in Swabia. By the 13th century, the Habsburgs domain enveloped a territory spreading from the Vosges Mountains in modern France to Lake Constance in Switzerland.

Rise to the Roman Kingship and Setbacks

The last emperor of the Hohenstaufen dynasty, Frederick II, died in 1250. An era of instability called “the Great Interregnum” followed, where various German princes and foreign kings fought for the throne. The main belligerents were Richard of Cornwall, son of the English king John Lackland, and Alfonso X of Castile. Despite their strong titles, the German Princes preferred to elect Rudolph von Habsburg in 1273. The Habsburgs’ staunch commitment to protecting German lands from foreign influence was a major factor in Rudolph’s rise to the throne.

However, the latter did not gain the title of Emperor because he had to be first validated by the Pope and contented with being King of the Romans. Thus, he immediately started conquering land lost to neighboring non-German realms such as Bohemia, and by 1286, he firmly secured the duchies of Austria, Styria, and Savinja under Habsburg control. Rudolph I died in 1291, leaving a strong legacy for his descendants.

While Rudolph’s son Albert I managed to keep the Roman Kingship after defeating his rival Adolf of Nassau at the Battle of Göllheim in 1298, his son Frederick the Fair was not as successful. He lost the Imperial crown to Louis of Wittelsbach. By 1330, the Habsburgs failed to keep the Roman Crown and were on the verge of losing the rest of their possessions to neighboring principalities.

Habsburg rule was continuously challenged in Bohemia by the House of Gorizia and the House of Luxemburg. Additionally, Swiss pressure pushed the Habsburgs out of the Confederacy, and by 1415, the Habsburg Castle itself was lost.

Despite the major setbacks of the 14th and 15th centuries, the Habsburgs spread their influence in Austria and Istria. In 1379, the multitude of family members led the split of the dynasty into Albertinian and Leopoldian lines. While the former had control of Lower and Upper Austria, the latter ruled Inner Austria, Styria, Corinthia, and Cariola.

In the early 15th century, the Duke Albert V of the Albertinian line gained control of Bohemia, Hungary, and Luxemburg. However, his death in wars against the Ottomans broke Habsburg rule over Central Europe. In the meantime, the Leopoldian line split even further.

Despite that, Count Frederick was elected to the Roman Throne in 1440. In 1452, he was crowned Emperor by the Pope in Rome. This gesture gave the Habsburgs legitimacy to rule over the Holy Roman Empire for centuries to come.

While in the ecclesiastic capital, Frederick III married Eleanor of Portugal, building the first familial link with the Iberian Kingdoms. In 1453, the Emperor gave the title of Archduke of Austria to his family. Following the death of Ladislaus of the Alberitinian line, Frederick inherited the lands of the Albertinian Habsburgs, reunifying the Great House.

In 1475, Frederick III coerced Charles the Bold of Burgundy into marrying his daughter Mary to his heir Maximilian, giving him rights on the Burgundian Succession and gaining direct control over the Low Countries.  Following the death of Mary in 1482, Maximilian and his father attempted to gain control over Burgundy. They were challenged by Charles VIII of France, starting a multitude of bloody conflicts between the Habsburgs and Paris.

Maximilian I: The Matchmaker

Maximilian rose to the Imperial Throne in 1493. As soon as he got elected, the new Emperor was involved in the Italian Wars. Following the Hundred Years’ War against England, the Valois kings of France undertook major efforts to centralize the country under their sole rule to the detriment of local nobilities. With the death of King Louis XI in 1481, all power was consolidated in the hands of the monarchy. His son Charles VIII looked to expand French influence abroad, namely to Italy.

Invoking a dynastic claim on Naples, Charles VIII took Milan in 1493 before occupying most of Italy by 1495.  He prevented the formal approval of the Imperial title of Maximilian by the Pope and drastically curved Habsburg influence in the region.

Despite this temporary setback, Maximilian received a major matrimonial union with Castile by marrying his son Philip to the future Queen Joana in 1497, daughter of the infamous Isabella and Ferdinand. Thanks to a military alliance with the Pope, the Habsburgs managed to regain their influence in Italy by 1508. Finally, the Holy Roman Emperor set the path for Habsburg reign over Hungary by marrying his grandchildren Mary and Ferdinand to Louis, heir of the Hungarian Throne, and his sister Anna in 1515.

Maximilian I died on the 12th of January, 1519. At the time of his passing, the Habsburgs had several ties to other reigning dynasties. His grandson, Charles, would be elected as monarch of the Holy Roman Empire and become one of the most influential figures in European History.

Charles V and the Habsburgs’ Dominance In Western Europe

Following the death of his father in 1506, Charles became Lord of the Netherlands. In 1516, he inherited the Thrones Castile and Aragon after the passing of his mother.  The Union of both realms would solidify under his reign and form the Kingdom of Spain.

By inheriting the crown of Aragon, Charles also gained rights to various Italian kingdoms such as Naples, Sicily, and Sardinia. This set him on a collision course with France, as Francis I de Valois set claims on some of the above-mentioned realms. In addition, the French king challenged the Habsburgs’ rule over the Netherlands.

Following the death of Emperor Maximilian, Charles was elected to the Throne of the Holy Roman Empire in 1519, becoming Charles V. By the beginning of the 1520s, he was the ruler of Austria, the majority of German Principalities, Southern Italy, Central Europe, the Netherlands, and Spain.

One of the biggest challenges of Charles’s reign was the emergence of Protestantism and the Christian Schism that followed. The Emperor invested great efforts to curve the progress of the reformation. While successful in Spain, he had to accept the existence of Protestant Principalities in the lands of the Holy Roman Empire and the Netherlands.

In addition to the Protestants, Charles had to continuously face France, which was surrounded by Habsburg possessions. In 1521, Francis I initiated a conflict in Northern Italy, which concluded with the Battle of Pavia in 1525. Winning a decisive victory, Habsburg forces not only defeated the French but imprisoned their king, thus neutralizing one of the many threats to Charles’s rule.

By 1530, Habsburg rule over Austria, Southern Italy, Spain, and the Netherlands was unchallenged. No power was able to contest Charles V’s dominion over the Catholic world.