HomeAncient History6 Roman Emperors that Shaped the History of Rome

Many emperors led Rome throughout its long history but only a few left a profound mark, shaping the Empire’s course. Here are the six most influential Roman emperors. 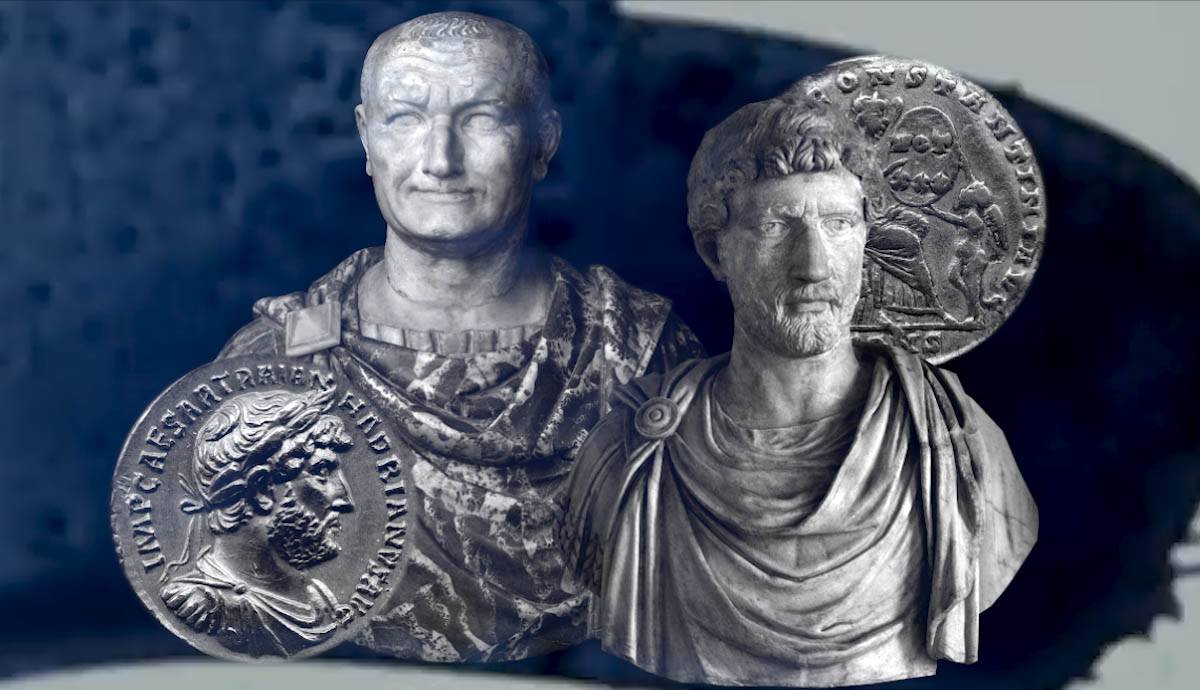 The Roman Empire left an indelible imprint on the history of mankind. At its apex, this vast Empire spanned continents and included over 65 million people, who spoke one language and used one coinage. This vast empire was protected by the mighty Roman legions stationed along the frontier — from the forests of Britain to the sands of North Africa, along the great European rivers of the Danube to the Rhine to the Persian Gulf. Even today, ruling over such a complex and enormous state would be a monumental task, not to mention the threats from external and internal rivals. Many Roman emperors managed to fulfill their duty while some failed, losing their life. However, a few managed not only to achieve greatness but to change the state’s structure and direction, reshaping history itself. This is their story.

Augustus: First of the Roman Emperors

When Gaius Octavian was born in 63 BCE, few could have predicted this boy would become ruler of Rome, reshaping its history and laying the foundations of a world superpower. Octavian emerged on Rome’s political stage following the assassination of his uncle Julius Caesar. In his will, Caesar adopted the boy, making him his heir. The civil wars that followed Caesar’s death ended in 30 BCE when Octavian eliminated Mark Antony and Cleopatra. He was now in control of the wealth of Egypt and the entirety of the Mediterranean. Most importantly, Octavian was the sole ruler of the Roman Republic.

The ruins of the Republic would soon transform into something greater. With the help of his loyal friend, Marcus Vipsanius Agrippa, Octavian convinced the Senate to give him unprecedented power. From 27 BCE until his death in 14 CE, Octavian, now known as Augustus, seized control of the government and the army. He was a principal source of law, controlling state finances, foreign policy, and religion. Augustus also had monopoly over the legions. The Roman military was now a standing army, with regular salaries and pensions. To avoid further civil wars and curb the political ambitions of military commanders, Augustus transferred the legions to the frontier. To protect himself, he established the Praetorian Guard.

Although he wisely avoided abusing power and co-operated with the Senate, acting as the princeps (first among equals), Augustus remained in control — he was the first of the Roman emperors. From Augustus onwards, one man would rule over the entire Empire, and his descendants would form the first imperial Roman bloodline  — the Julio-Claudian dynasty.

The Julio-Claudian dynasty met a bloody end with the violent death of Emperor Nero. His death was the end of one illustrious bloodline and the beginning of a period of chaos that plunged the Empire into a bloody civil war, also known as the “Year Of the Four Emperors”. After three of these Roman emperors died, one man emerged victorious. In 70 CE, at the head of his legions, Titus Flavius Vespasian arrived in Rome and proclaimed himself emperor.

Vespasian had strong military support (always a good thing in Rome) but he could not lay claim to the dynasty, having no blood relation. To resolve the issue, a law was passed before his arrival to Rome, conferring imperial powers on him (the Lex de imperio Vespasiani), which allowed Vespasian to take the diadem and establish his own Flavian dynasty of Roman emperors.

Vespasian began a propaganda campaign to further legitimize his rule, distributing coinage across the Empire, praising the emperor’s restoration of peace, and strengthening the legions. The emperor also stabilized finances, paying particular attention to the provinces, while in Rome, he reshaped the city’s skyline with monumental structures like the Colosseum.

Augustus laid the foundation for the Roman Empire and established the first imperial dynasty but Vespasian took it to a new level, establishing a law which allowed him and all Roman emperors to legitimize their claim.

During the reign of Emperor Trajan, one of the most powerful Roman emperors, the Roman Empire reached its greatest extent. His achievements were recorded in stone, in monuments erected across the Empire, including the famous Trajan’s Column. One of the men who followed Trajan on his campaigns was Publius Aelius Hadrianus or Hadrian. Marked as Trajan’s successor, Hadrian took the throne in 117 CE. His reign was marked by a period of peace and consolidation. The only exception was a revolt in Judaea in 132 CE.

Hadrian was fond of Hellenistic culture. He was also a traveler, who spent most of his reign roaming all over the vast empire. Hadrian looked after the imperial army, and subsequently the soldiers adored their commander-in-chief. Thus, it is not surprising that the emperor who personally inspected the entire length of the border also established the Empire’s frontiers. Halting expansion, Hadrian focused on strengthening his defenses. In Africa, he built fortified roads. On the Rhine and Danube, palisade walls, watchtowers, and forts defined Roman-controlled territory. Hadrian’s most famous work still stands in northern England — a stone wall spanning from coast to coast, bearing the emperor’s name.

Unlike his predecessors who pushed the Empire’s borders forward, Hadrian knew when to stop. His defensive works separated the Roman territory from the barbaricum, and solidified the image of the Empire and its borders, which, apart from a few minor adjustments, Hadrian’s successors continued to keep in place.

Unlike the violent collapse of the Julio-Claudians, the power transfer between the next two  successor dynasties was smooth and peaceful. Hadrian chose Marcus Aurelius, still a child, to be his successor. Thus, Hadrian’s successor, Emperor Antoninus Pius, groomed Aurelius for his future role.

The training served Marcus Aurelius well. Upon his succession in 161 CE, the new emperor had to deal with several crises on the Empire’s frontiers. Rome’s eternal nemesis, Persia, threatened the eastern front, while the breakdown of the Danubian Limes exposed the imperial heartland of Italy to barbarian attack. Initially, Marcus Aurelius had the support of his co-ruler, Lucius Verus. But after Verus’ death from the plague, the emperor had to deal with the crises alone. Marcus Aurelius spent the rest of his reign on the Danube, where he died in 180 CE.

Perhaps due to the emperor’s constant involvement in warfare and the need for efficient crisis management, Marcus Aurelius began promoting both army officers and civilian administrators on the basis of merit and ability, rather than birth and class. The process started under Hadrian but intensified under Aurelius. To avoid displeasing the Senate, the promoted men would be elevated in their rank too. The consequence of this policy was greater social mobility. More importantly, Aurelius’ reforms broadened the base for army recruitment, which allowed for greater flexibility in the future.

The assassination of Commodus in 192 CE brought the Antonine dynasty to an end. What followed was a bloody civil war. Eventually, Lucius Septimius Severus, a North African aristocrat and general, emerged as the victor, taking the throne in 197 CE. Severus tolerated the Senate but made it clear that the army was the basis of his power. A generous salary rise, the first in more than a century, further solidified the army’s support. More importantly, it tied the military not only to Severus but to his children and the emerging Severan dynasty.

But Severus did not stop there. Besides the militarization of the new dynasty, he also made the first moves to detach the imperial household from the populace. Severus made himself and his family sacrosanct, setting a precedent that would become a fourth-century trend. Inscriptions and monuments presented the domus divina—the imperial family—as a sacrosanct and unassailable entity.

Severus’ reforms, however, failed to protect his dynasty. The soldiers were powerful backers, but only for Roman emperors who proved to be competent commanders. The violent death of the last Severan emperor, Severus Alexander, at the hands of his own troops, kickstarted a chaotic period, which required a military man on the throne, who more often than not lost his life in internal or external conflicts. The Empire, however, endured, and when Diocletian took the reins at the end of the 3rd century, he established an autocratic and absolutist rule—the dominate—following Severus’ model.

Constantine the Great: First of the Christian Roman Emperors

Diocletian’s solution for the Empire’s stability was the Tetrarchy — a system that allowed for the rule of four Roman emperors (two senior Augusti and two junior Caesares). The plan was to satisfy the powerful generals’ political ambitions by allowing each of them to rule over a quarter of the Roman world. Unsurprisingly, the system backfired not long after Diocletian’s voluntary abdication. Instead of bringing cohesion and peace to the Empire, it created new rivalries, sparking further civil wars. The winner of those wars would make one of the most crucial changes to the imperial system and he would change the course of the Empire for centuries to come.

Flavius Valerius Constantinus, or Constantine the Great, was the son of one of the tetrarchs. Upon his father’s death, Constantine was proclaimed emperor by his soldiers, plunging headfirst into the two-decade-long civil war. In 312 CE, Constantine’s troops defeated one of his rivals, Maxentius, at the Battle of Milvian Bridge outside Rome. According to a popular legend, prior to the battle, Constantine saw a cross in the sky and was told: “In this sign shall you conquer.”

Following Constantine’s victory, in 313 the emperor declared Christianity as one of the permitted imperial religions. Imperial support laid the foundation for the Christianization of the Empire, and eventually, the world. Was Constantine a true convert or an opportunist who saw a possibility to claim political legitimacy with the new religion? It is hard to say. In the same year, Constantine moved the Imperial capital to newly founded Constantinople, ensuring the Empire’s survival. Constantine also reorganized the army, following Diocletian’s model, further strengthening the Empire. The Roman (or Byzantine) empire fell more than a millennium later, in 1453..

The Assassination of Julius Caesar: The Bodyguard Paradox & How It Cost Him His Life