The Accursed Share: Georges Bataille on War, Luxury and Economics

George Bataille’s theory of the ‘accursed share’ theorizes that there is a portion of human energy and wealth that cannot be spent usefully. 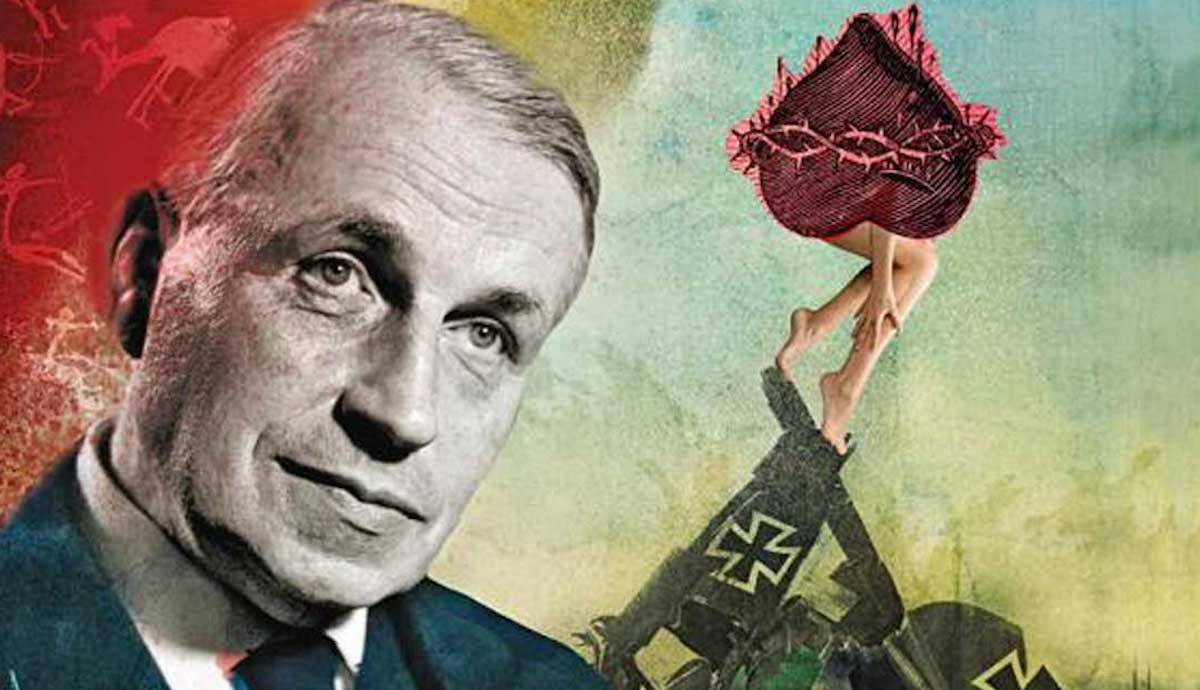 The first volume of Georges Bataille‘s The Accursed Share (La Part Maudite, 1949) describes it as a book on ‘general economy’. This term, taken from Friedrich Nietzsche, is the framework in which Bataille discusses the expenditure of wealth and energy. The economy Bataille is talking about extends far beyond the boundaries of monetary exchange, markets, and modern capitalism. Indeed, the case studies which make up much of the volume stretch back to pre-industrial and pre-capitalist societies.

By general economy, George Bataille broadens the scope of economic considerations to include all the energies humans exert in their lives. Bataille describes a world composed of exchanges and investments of energy, occurring in every action and word, in all the activities conventionally thought of as economical in nature, and plenty that are not. Above all, perhaps, Bataille spends much of the text discussing religion and its implications for the ways in which we invest energy and resources.

The book’s title refers to a portion of energy in human life, the portion which we cannot usefully invest, and that must be spent. Bataille identifies that the increasing trend of human political arrangements is to seek the useful, or productive, investment of all wealth. In other words, we seek to use all the wealth that we might earn or accrue, that comes from previous investments or labor – on a society-wide scale – to produce more wealth: to increase productivity. This is still expenditure, we spend wealth on food and shelter that will allow us to work, spend our energy in labor to produce more wealth, and so on – but this remains productive expenditure.

The Need for a Theory of General Economy

Before unpacking the nature and implications of non-productive expenditure, it is first necessary to explain more fully what George Bataille means by ‘general economy’ and why he thinks it is an important, and unacknowledged, field of study. Bataille notes in Volume 1 of The Accursed Share that while there might be some simple activities, like the ploughing of a field, that can be easily imagined in isolation from the rest of the world, as soon as we start to think on a larger scale this kind of subdivision becomes impossible. Bataille diagnoses the failure of most theories of political economy as emerging from a related narrow sightedness: economists tend to think of the economy of a country, or even the entire world, as being an aggregation of hypothetically subdivisible activities and events.

As such, theorists of economics, in Bataille’s estimation, tend to miss patterns and laws that are visible only when economy is assessed at its most general level. Crucially, for Bataille, this most general level of economy includes causes and events which would never be noticed or deemed relevant by the specialized economist. Bataille writes:

“In overall industrial development, are there not social conflicts and planetary wars? In the global activity of men, in short, are there not causes and effects that will appear only provided that the general data of the economy are studied?”
(Bataille, The Accursed Share: Volume 1)

Above all, the kinds of events and practices Bataille wants to bring into view of political economy are wars, religious practices (and especially sacrifices), and sexual practices.

Expanding the field of political economy to that of ‘general economy’ also inflects Bataille’s thinking with a biological component: the contemplation of human societies as continuous with, or analogous to, organic ones. The investment of monetary wealth in the growth of an economic system becomes just one instance of a more general pattern. Bataille then goes on to suggest that in all these systems, some portion of the wealth generated cannot be usefully spent:

“The living organism, in a situation determined by the play of energy on the surface of the globe, ordinarily receives more energy than is necessary for maintaining life; the excess energy (wealth) can be used for the growth of a system (e.g., an organism); if the system can no longer grow, or if the excess cannot be completely absorbed in its growth, it must necessarily be lost without profit; it must be spent, willingly or not, gloriously or catastrophically.”
(Bataille, The Accursed Share: Volume 1)

The important commonality between these three things, beyond their exclusion from conventional theories of economy, is that they all involve non-productive expenditures of wealth and energy. When it comes to sex, Bataille is concerned here both with its non-reproductive aspect and with the fact that sexual reproduction, from a biological standpoint, is in his estimation wasteful of energy, much like death. The necessity of some profits being ‘spent lavishly’ is, George Bataille observes, endlessly obfuscated and denied – contrary as it is to the principles of recuperation, self-interest, and rationality that govern the economy as we ordinarily conceive it. Bataille writes:

“To affirm that it is necessary to dissipate a substantial portion of energy produced, sending it up in smoke, is to go against judgments that form the basis of a rational economy.”
(Bataille, The Accursed Share: Volume 1)

While the fact of the accursed share is merely a law of natural systems for Bataille, the impulse to deny its necessity, and to enforce taboos regulating this kind of irrational expenditure, is a dangerous and human imposition. It is in light of this that The Accursed Share begins to speak prescriptively of politics. Refusal to acknowledge the necessity of non-productive expenditure does not stop it occurring, but rather takes its occurrence beyond our control and tends to make its expression violent rather than jubilant. Above all else, war is the sphere in which lavish expenditure bursts out, if it is not first dissipated by other means. War and sacrifice both cover non-productive expenditure with a veneer of usefulness, in the first case by implying that prospective political, territorial, and economic benefits motivate the competitive exercise of war; in the latter by relocating the dividends of material expenditure to the metaphysical.

Speaking damningly of the tendency to deny the accursed share’s implacable necessity, Bataille writes: ‘Our ignorance only has this incontestable effect: It causes us to undergo what we could bring about in our own way, if we understood.’ (Bataille, The Accursed Share: Volume 1) Much of Bataille’s project, a project which extends through almost all his written works – philosophical and fictional – is the exploration of the ways to redirect destructive forces by choice, to minimize their expression in war and find their celebration in eroticism.

Any superabundance of wealth and growth – which Bataille describes in a series of anthropological case studies, stretching from Potlatch to the USA’s post-war Marshall plan – is most readily discharged through war because death is the wasteful of all expenditure. Bataille picks up on this theme in his later work Erotism (1957), but its definitive kernel is found in The Accursed Share: Volume 1: ‘Of all conceivable luxuries, death, in its fatal and inexorable form, is undoubtedly the most costly.’ (Bataille, The Accursed Share: Volume 1) In knowledge of this fact, however, we might (and should) carve out channels by which other kinds of lavish consumption and expenditure can occur. Bataille’s writings on eroticism, both in Erotism itself and in the earlier novella, Story of the Eye, map out extravagant sexual possibilities for the expenditure of energy. Meanwhile, gift-giving, feasting, and straightforward squander all afford outlets for the mounting excesses of general wealth afforded by mechanization.

Volumes 2 & 3 of The Accursed Share are committed to elaborating the political implications of Volume 1’s theory of general economy as they concern the modern geopolitical landscape. In particular, Bataille asserts the need for contemporary socialist and communist thought to grapple with the accursed share. On one hand, the principles of socialist governance give greater allowance, in Bataille’s estimation, for the general, rather than particular, perspective on economy – that is, socialism does not conceive of the economy from Smith’s standpoint of the rationally self-interested individual. On the other hand, Bataille assesses socialist thought, particularly as it was contemporaneously being put into practice in the USSR, as being unable to ideologically reckon with luxury and squander.

Bataille discusses at length the implications of mechanization and automation for the USSR’s production and growth, estimating that this trend would quickly generate a superabundance of wealth, wealth which could not be relentlessly reinvested in the growth of the system.

Bataille diagnoses Soviet communism as being particularly rhetorically disinclined from admitting the necessity of any non-productive expenditure. Bataille’s fear, given this ‘unprecedented accumulation’, is that the attitude of shame expressed in much communist thought towards extravagant consumption – its inevitable echoes of the old regime, of capitalist decadence – risks leading the USSR, and indeed all possible socialist states, towards war once production reaches a certain level. (Bataille, The Accursed Share: Volumes 2 & 3)

Writing in the gathering intensity of the Cold War, Bataille’s concerns about both sides’ approaches to mechanization, growth, and war are immediate as well as theoretical. He muses that perhaps, if communist thought continues to shrink from the logic of the accursed share, of necessary wastefulness ‘some unacceptable provocation by its enemies will cause its [the USSR’s] leaders, frightened by a consumption that disgraces them, to plunge it into war.’ (Bataille, The Accursed Share: Volumes 2 & 3)

The construction of avenues for extravagant consumption is the task Bataille sets out for socialist thought, but the general burden is greater still. The problems facing socialist thought and the capitalist world alike stem, in Bataille’s estimation, from something highlighted at the very beginning of The Accursed Share’s first volume: the failure to move outside subjectivity, our particular viewpoints, in conceiving of the economy. The task that remains, and one that will again haunt the later Erotism, is that of escaping the boundaries of the subjective self.

What Was the Manhattan Project?