HomePhilosophyAdam Smith and the Origins of Money

Adam Smith’s best known work effectively founded the discipline of economics on theories concerning the origins of money and markets. Do those theories stand up to scrutiny? 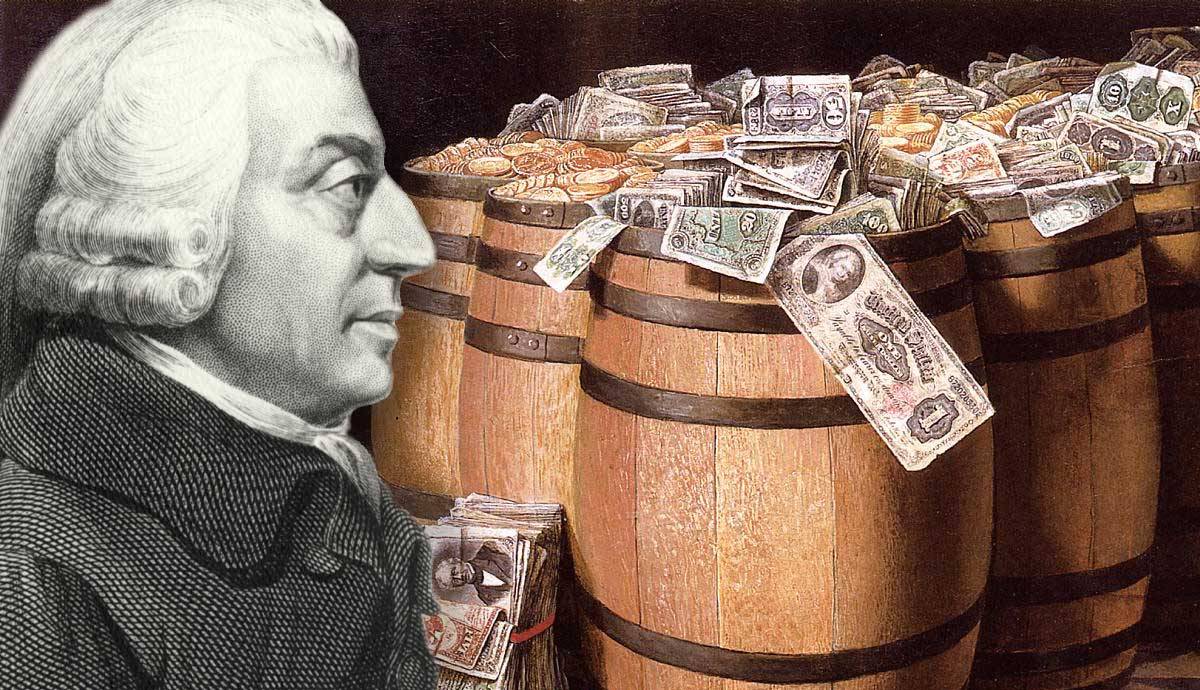 Adam Smith’s Wealth of Nations is widely seen as founding the discipline of economics, as well as an epochal work in the study of politics and society. It combines various descriptive theories about how economic activity actually happens and came to happen in the way it does with prescriptions for good governance. Smith’s prescriptions have come to be extremely influential for modern day libertarians, and indeed anyone who believes that unrestricted commerce leads to more affluent, better organized and generally better societies.

As those prescriptions rest on certain descriptive claims, determining whether those claims are actually true might have implications far beyond an assessment of Adam Smith’s thought alone. The claim this article focuses on is his theory of the origins of money.

What was Adam Smith’s theory of money? For Smith, money – as with all financial and commercial instruments – finds its origins in the earliest versions of human society. Smith takes it that human beings have a ‘natural propensity’ to barter, to trade and to generally use the mechanism of exchange to their own advantage. This approach to human nature locates Adam Smith firmly in the liberal tradition, whose adherents (like John Locke) held that the proper function of government should be limited to protecting private property.

Adam Smith argues that human society begins with barter, meaning that getting what one wants but others possess means offering them something they want but do not possess. This system, relying on a ‘double coincidence of wants’, is sufficiently impractical that it will eventually give way to the use of a single commodity, which can be traded for anything. Whereas this single commodity could be anything so long as it is reasonably portable, easily stored and easily divided, precious metals eventually become the obvious candidate as they can embody these characteristics most accurately.

Adam Smith isn’t telling this story as some kind of ideal representation of how money might have emerged, but as the correct history for the emergence of money. He claims to be using reports from North America concerning indigenous peoples and their economic behavior as the basis of his view. It is here that three critical issues emerge with Adam Smith’s view. First, we now know that indigenous societies are not merely the preservation of some original, primitive human society but have gone through processes of urbanization, political change, crisis and so on, so drawing on these societies as his main source material for what early human societies were like was a mistake. Second, much of Adam Smith’s information about indigenous societies was just plain wrong, and wrong in a pointed way.

Adam Smith’s repeated references to ‘savages’ cannot be excused as the idiolect of a man of his time. His constant racialized jibes often serve to make no particular point, and he wrongly assumes that barter is a major part of exchange in indigenous societies. The Wealth of Nations  contains no testimony from any indigenous peoples.

Indeed, Smith tends to see the organic creation of money out of the barter economy where there is none to be found. Another example he uses, closer to home, involves a Scottish village where builders still use nails as a form of payment. But this isn’t the creation of a local currency in response to a system of barter – rather, those who employed builders were known to offer them nails as a guarantee when their actual payment was delayed. Using these nails is rather like using some kind of IOU, which can be transferred from the builder’s employer to the builder to the butcher, baker and pub landlord. What this certainly doesn’t show, as Smith takes it to, is that money is the necessary consequence of interactions between relative equals. Rather, it demonstrates how important hierarchy is for the formation of money of any kind.

Towards a Better Theory?

What does all of this mean for constructing a more accurate theory of money? Adam Smith’s approach has certain flaws which can be remedied – obviously, the weak evidence for certain historical claims could easily be replaced with a more accurate history of the origins of money. However, an accurate history of money will not help us to theorize about money unless we can say what money actually is, which is a deceptively difficult task. Money, along with such related institutions as private property and markets, is difficult to define precisely. Of course, there are all kinds of examples of money-objects – various forms of coin, note, cheque and so on. But money is not just an object. Credit cards aren’t themselves money, but do nonetheless allow us to spend money of a virtual kind.

Indeed, financial institutions and governments are relentlessly concerned with the management of money which is almost entirely virtual in nature. There is a tendency to move between a conception of money as ‘really’ an object or at least some kind of physical form, and money as a wholly constructed, purely conceptual kind of thing.

Up until 1971, the so-called ‘Gold Standard’ kept American money tethered to U.S gold reserves. All forms of money, whether accounted for in physical form or virtually, could be conceived of as accounting for a share of this overall gold supply. Now that the Gold Standard has been abandoned by the United States (and was abandoned by other countries significantly earlier), it is more common to see money as ‘fiat’ – that is, primarily as a construct backed up by the authority of the government.

The reason why bank notes are extremely valuable rather than worthless pieces of paper has everything to do with the fact that the government will guarantee your right to use things purchased with it exclusively, and to prevent anyone else from using it. Clearly, Adam Smith was right to think that a historical investigation was required to explain exactly how all of this virtual, fiat money works.

David Graeber offers the example of the formation of the English money system as an example: “ In 1694, a consortium of English bankers made a loan of £1,200,000 to the king. In return they received a royal monopoly on the issuance of banknotes. What this meant in practice was they had the right to advance IOUs for a portion of the money the king now owed them to any inhabitant of the kingdom willing to borrow from them, or willing to deposit their own money in the bank—in effect, to circulate or “monetize” the newly created royal debt.”

The bankers then got to draw interest on this debt, and continue to circulate it as currency. And, if Adam Smith was wrong and markets don’t emerge spontaneously, this is an excellent way to create them as now there is a unit of currency whose value is stable, because it is really a share of the state’s debt. Note the promise on English bank notes is a promise of repayment: “I promise to pay the bearer on demand the sum of x pounds”.

This article suggests that a key descriptive claim concerning the origins of money is just plain wrong, and so it is worth considering how far this affects the significance of Adam Smith’s overall thought. Adam Smith’s approach to politics was certainly shaped by his economic investigations, and his belief that money emerges from barter systems which represent an innate human propensity to improve one’s lot by exchange played a big part in that. But this isn’t the only source of his political thought. His prior treatise on ethics – The Theory of Moral Sentiments – articulated the view that what matters most of all is an individual’s character, and so creating a better society involves improvements on an individual level. This is a prescriptive or normative claim, concerned not with describing how the world is but evaluating what makes the world better or worse. Disproving Adam Smith’s theory of money does not in itself undermine every aspect of his wider thought.

As mentioned at the start of this article, the philosophy of Adam Smith is often cited by those who believe that free markets are, for the most part, the most effective way to distribute resources, divide labor and organize economies in general. However, it is just as true that the most influential modern libertarian intellectuals hold beliefs which Smith would likely have rejected. One such belief is skepticism about the relevance of morality beyond that which emphasizes individualism to political and social ideals. Milton Friedman is skeptical about moral arguments in general, and Ayn Rand’s radical individualism does not deem concern for others a defensible ethical stance. These thinkers do, nonetheless, absorb much of Smith’s descriptive claims about economies and the importance of free markets.

Samuel Fleischaker argues that, “In sum, if Smith’s political philosophy looks like libertarianism, it is a libertarianism aimed at different ends, and grounded in different moral views, than that of most contemporary libertarians. Today, many libertarians are suspicious of the notion that individuals ought to develop virtues expected of them by others: beyond, at least, those virtues that are needed for the functioning of the market and the liberal state themselves.” However, what the implications of this are for libertarianism as a whole is less clear. This does not constitute a general criticism of libertarianism. For one thing, there are modern libertarians who deploy elaborate ethical justifications – Robert Nozick is a prominent example. Nonetheless, given the lack of independent ethical justifications from many libertarian intellectuals, it seems that whereas Adam Smith’s overall thought isn’t wholly undermined along with his theory of money, the same does not hold for all of his modern adherents.