Ancient Ghost Stories from Around the World

Ghost stories have been around for thousands of years. Just like today, the ancients had their own spooky stories and mythology. 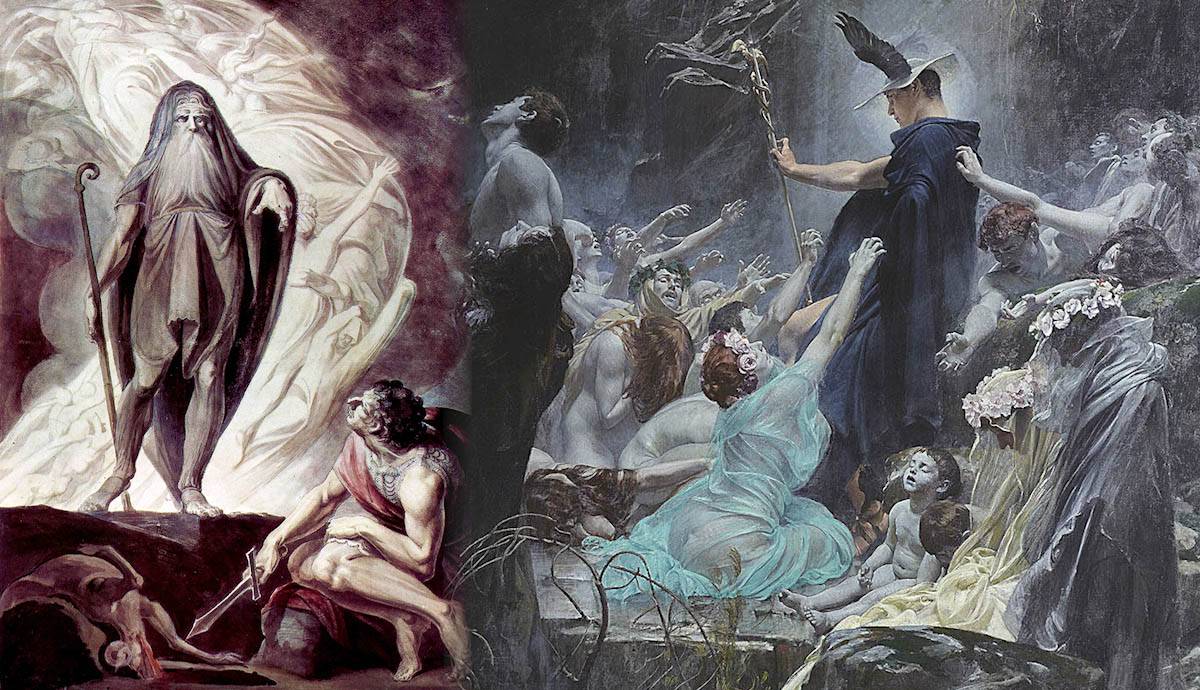 Terrifying tales of hauntings, ghosts, and specters were as popular amongst the ancients as they are today. From the epic poetry of Homer and Vergil to the tragedies of Aeschylus, and the histories of Herodotus and Tacitus, people have told ghost stories throughout the history of civilization. The many mysterious stories of ethereal visitations that were shared amongst the ancients reveal a deep fascination with death and the afterlife. In this article we will look at some of the spookiest ghost stories of distant times, from ancient Mesopotamia, Greece, and Rome.

People throughout the known world have told ghost stories, from the ancient Mediterranean to Mesopotamia, China, and Egypt. In Mesopotamia, ghost stories have been discovered as far back as five thousand years ago. According to the Mesopotamians, when a person’s physical body died, it created what was known as a gidim, an imprint or image of the person at the time of their death which retained their memories and personality in ghost form. In the mythology of the afterlife, people believed the soul of the dead would travel to the underworld or Irkalla, an inescapable place where spirits would dwell for eternity. However, in some cases, it was even thought that spirits or gidim could escape and infiltrate the mortal world. Mesopotamians believed the gidim who dwelled in the mortal realm did so because they had not received a proper burial. They assumed these spirits could not find peace, so instead they would haunt family and friends.

The Epic of Gilgamesh

When the people of ancient Mesopotamia experienced illnesses and misfortune, they believed it was caused by hauntings, or gidim. Mesopotamians regularly made offerings to the dead to placate them if they thought a gidim was responsible. A famous example of one such spirit from ancient literature is found in the Epic of Gilgamesh. In the epic story, king Gilgamesh summons his friend and war-hero Enkidu back from the dead, inviting him into the mortal world in ghost form.

Ancient Greeks believed two underworld goddesses presided over the spirits of the restless dead, known as Melinoe and Hecate. Melinoe was thought to oversee the propitiations offered to ghosts and spirits of the dead. She was described in ancient literature as wandering the night, followed by a train of ghosts, striking fear into the hearts of all who saw her. Hecate was also associated with ghosts, accompanied by the Lampades as her retinue. Like Melinoe, Hecate led her own nocturnal procession of ghosts, heralded by the barking of dogs. The widespread prominence of these two deities in Greek culture, who were dedicated to overseeing restless spirits, indicates that the Greeks were fascinated by the concept of ghosts.

Ancient Greeks divided ghosts and specters into three subcategories – the ataphoi, the aoroi, and the biaiothanatoi. The ataphoi were believed to be the spirits of people whose bodies had not received a proper burial. A prime example of an ataphos from ancient Greek literature is Elpenor from Homer’s Odyssey. In the epic story of Elpenor – a companion of Odysseus – he fell off a roof while intoxicated, and his body was left without a burial. When Odysseus later visited the underworld, Elpenor’s shade appeared and begged the hero for a burial. Greeks also believed in the aoroi, or spirits of those who had died too young. These spirits were left unfulfilled by life, and could easily become vengeful after death. Lastly, they thought a biaiothanatos was the spirit of a person who had suffered a violent death, including those who died in battle and war. Much like the ataphoi, Ancient Greeks believed that a biaiothanatos would become active if they were not properly buried. Indeed, the majority of ghost stories from Greek literature find their origin in improper burial, suggesting burial rites were essential elements of ancient Greek religion.

In ancient Greece, people’s beliefs on the nature of ghosts were not always consistent. Ancient Greeks described ghosts in a variety of ways, from being transparently pale to pitch black. The vocabulary used also varied and included terms such as δαίμων (daimōn) and φάσμα (phasma) which refer to any supernatural activity from ghosts to gods.

Odysseus and the Underworld

The works of Homer provide some of the earliest examples of ghost stories. While in the underworld, where Odysseus had encountered his companion Elpenor, he also came across the spirit of his mother, Anticlea. Unaware she had passed while he had been on campaign, Odysseus tried to embrace her but was unable. In Homer’s description of the dead, it appears that spirits could hear the living and receive their offerings. However, they were only able to interact with the living after drinking blood, which Odysseus provided. His mission upon entering the underworld had been to consult the ghost of the seer, Teiresias. While there, Odysseus also encounters spirits of “brides, unmarried men, virginal girls, men killed in battle who still wear their bloody armour.”

In the ancient Greek tragedies of Aeschylus, namely the Oresteia, we find even more ghostly appearances. The most significant spectral visitation in Aeschylean tragedy is that of Clytaemnestra. Clytaemnestra killed her husband, Agamemnon, with the help of her lover Aegisthus. In order to avenge his father, Orestes killed his mother, Clytaemnestra, along with Aegisthus. Because Orestes had committed the crime of matricide, he was hunted and pursued by the Erinyes. The Erinyes, or Furies, were three goddesses who enacted justice and punishment on those who had committed crimes against the natural order. The ghost of Clytaemnestra appears in the final play of the Oresteia trilogy – the Eumenides. In the play, Clytaemnestra is a vengeful spirit, and her ghost urges on the Furies in their hunt for Orestes.

One more ghost story from ancient Greece was recorded in the form of a letter by Proclus (410-485 CE) in late antiquity. It concerns the story of Philinnion and Machates, supposedly written down by Hipparchus of Amphipolis. Hipparchus’ letter stated that during the reign of Phillip II of Macedon, Philinnion was an unwed maiden who died unexpectedly. After her death, she returned to the home of her parents as a ghost. Unaware that Philinnion was a ghost, a guest named Machates slept with her for three consecutive nights. Throughout their time together, Philinnion gave Machates small gifts. When they were discovered by her family, Philinnion declared that her visitation was the gods’ will, and her corporeal form fell dead. Upon opening Philinnion’s tomb, her family discovered that her body was missing as well as her burial gifts. These were the gifts she had given Machates. After this discovery, the terrified townspeople burned Philinnion’s body outside the city walls.

Although ancient Greeks told ghost stories through literary sources and plays, ancient Romans more commonly shared their ghost stories through word of mouth. In Latin, as in Greek, there was little distinction between types of supernatural beings. Ancient Romans used words such as monstrum both for positive religious experiences and to describe neutral or antagonistic ghosts.

One of the few examples of ghostly encounters from ancient Rome is found in the literature of Apuleius. In his Metamorphoses (9.29–30), an unpleasant apparition was summoned by a jilted wife who intended for the ghost to kill her husband. The specter appeared each day at midday until the deed was done. One day, a mysterious woman was sighted luring the man into a room. When the husband’s servants searched for him, they broke down the door to find the man dead. The mysterious woman was nowhere to be found, and was believed to have been the midday apparition.

A Letter by Pliny the Younger

One of the most popular ghost stories from ancient Roman Latin literature is found in a letter. The letter was written by Pliny the Younger to Lucius Sura, and dated to the first century CE. According to Pliny, there was a mysterious house located in Athens. The house was supposedly haunted, and strange noises could be heard at night. The sound of rattling chains could be heard throughout the house. At first, they sounded far off, but gradually came closer. Finally, a specter would appear in the form of a bearded, emaciated old man with long hair. This haunting vision was described as being chained at both his arms and legs. Unable to bear the haunting, the residents soon left, and the house was left abandoned. It is thought the Greek philosopher Athenodorus found out that the house was for sale, and upon further investigation, learned the stories associated with the building.

Athenodorus bought the house and moved in soon after. One night, when the philosopher was seated on a couch in the front of the house, he heard the sound of rattling chains. However, he focused on his writing. Slowly, the sound came closer. When the sound reached Athenodorus’ room, the philosopher looked up and saw the specter. The ghost looked at Athenodorus and waved a finger at him. However, in his stoic style, Athenodorus told the ghost to wait – and returned to his writing. The old man became insistent – and finally, Athenodorus got up from his seat and followed the ghost. The specter led the philosopher to the backyard and disappeared. Athenodorus then marked the area where the ghost had vanished. The following day, Athenodorus implored the local authorities to investigate the area. The skeleton of a man bound in chains was discovered in the spot he had marked. The skeleton was given a proper burial, and the house in Athens never experienced a haunting again.

The Importance of Burial Rites

All these ghost stories indicate that in ancient Mesopotamia, Greece, and Rome people believed in multiple forms of life after death. A consistent theme throughout these accounts is the lack of a proper burial for the deceased. Indeed, burial rites were incredibly important for ancient religions. It could be said, by extension, that hauntings and ghosts were considered a punishment for those not adhering to religious rules. These explanations notwithstanding, the ghosts of antiquity remained in many ways as mysterious and terrifying as they do today.