After World War II, art dealer Han van Meegeren was arrested for selling masterpieces to Nazi leaders. To avoid execution, he had to prove he committed forgery– not treason.

May 30, 2021 • By Jessica Jacob, Certified Anthropologist 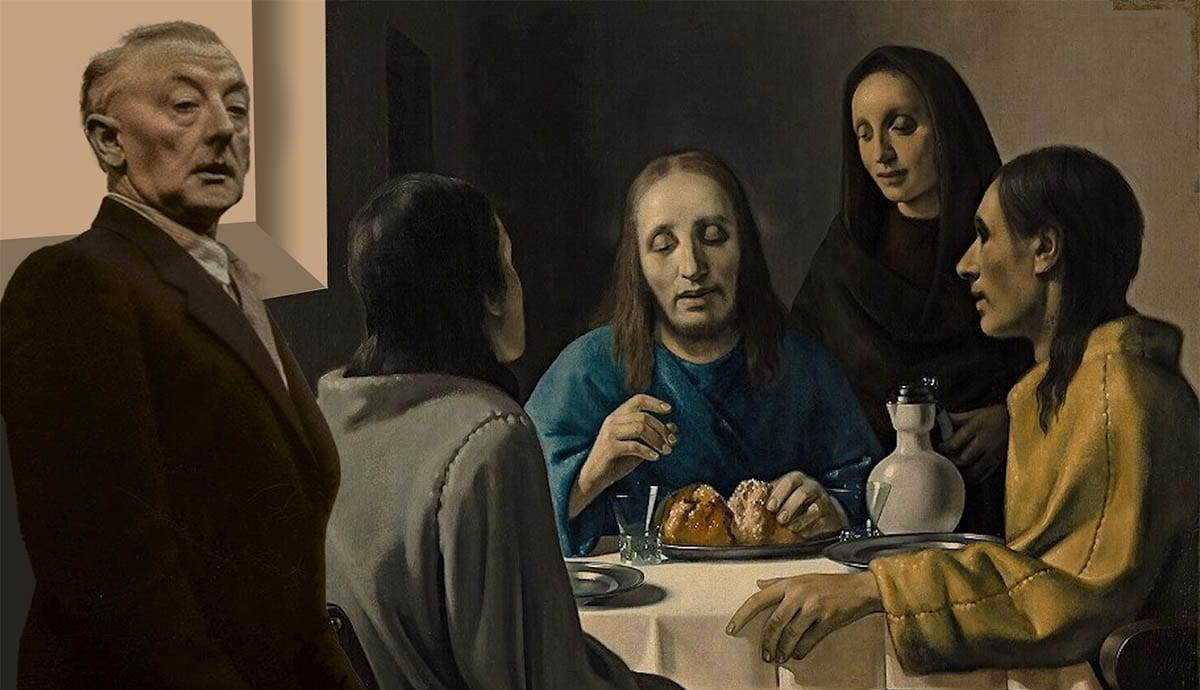 After World War II, the Allies and the nations that supported them carried out several extensive trials against both Nazis and those that worked with the Nazi Party. One of the men put on trial was a Dutch art dealer by the name of Han van Meegeren that sold paintings to many Nazi leaders. What the Allies didn’t know at the time is that the paintings sold by Han van Meegeren were all forgeries. To save himself from the death penalty, the art dealer was forced to prove that he committed art forgery. The only problem was that the forgeries were far too convincing.

Who was Han van Meegeren?

Henricus Antonius “Han” van Meegeren was born in the fall of 1889 in Deventer, a small city in the Netherlands. He was born to Augusta Louisa Henrietta Camps and Hendrikus Johannes van Meegeren, and Hendrikus worked as a teacher at the Dutch equivalent of a vocational school. As a young man, Han set out to be an artist after admiring Dutch paintings as a child.

Although art was his dream, Han’s father wanted him to be an architect. Han ended up studying architecture at a technical college in Delft, The Netherlands, the hometown of the famous Dutch painter Johannes Vermeer.

While studying there, van Meegeren met Anna de Voogt, an art student, and the two married in April of 1912 after Anna got pregnant. Their son Jacques was born in August of the same year. Han was fairly good at architecture, but he abandoned his architectural studies in 1913 in the hopes of becoming an artist. Han began taking classes at an art school in The Hague and even won a prestigious medal for his work there.

After earning a diploma from his art school, Han van Meegeren was able to teach and quickly took advantage of this opportunity. He worked as the assistant to a professor of drawing and art history at a university in Scheveningen, one of The Hague’s eight districts. Additionally, to make extra money, Han van Meegeren would sell his own drawings and paintings as Christmas cards and posters.

In 1915, van Meegeren and his wife Anna had a second child, this time a daughter named Pauline. In 1917 Han had his very first public art exhibition in The Hague and the success of the exhibition led him to join an exclusive Dutch society of painters and writers by the name of Haagse Kunstkring.

This good fortune didn’t last long for van Meegeren. In 1923, he and Anna de Voogt divorced, most likely due to infidelity. Anna and the two children moved to Paris in the summer, with occasional visits from Han. Eventually, in 1928, van Meegeren remarried to actress Johanna Theresia Oerlemans.

While van Meegeren managed to establish himself as an artist to some degree, mostly known for his portraiture, his art alone could no longer support his family financially. Unfortunately, art critics simply weren’t big fans of Han van Meegeren’s work, and their strong negative criticism impeded his blossoming career in the art world.

Hoping to prove his artistic talent, Han van Meegeren began copying paintings from several famous artists, including Pieter de Hooch, Gerard ter Borch, Frans Hals, and even Johannes Vermeer himself. Forging Vermeer paintings was especially lucrative because of how scarce they were– only about thirty-five Vermeer artworks were in a decent condition by the twentieth century when his work was popularized. This “copying” quickly turned to complete and total art forgery after art experts examined van Meegeren’s work and acknowledged it as genuine.

Despite the fact that his paintings were forgeries, van Meegeren was very technically proficient. Van Meegeren studied the lives and techniques of the Old Masters and he secretly worked for years, perfecting the craft of art forgery ever so slowly. He went as far as to mix his own paints, using only the pigments and oils in use during the time of each artist.

However, Han van Meegeren’s meticulous dedication to his art forgery didn’t stop there– he researched the canvases used by each artist and carefully applied resin, then baked the paintings, to give them a “cracked” look so they seemed appropriately aged. He even went through the painstaking process of creating his own period-accurate brushes, using badger hair to replicate Vermeer’s style perfectly.

Unfortunately for the art buyers van Meegeren fooled, the technologies that would’ve enabled them to discover the materials he used that were inaccurate, as the resin, weren’t available nor particularly advanced at the time. Almost all the experts of van Meegeren’s day had to rely on their own critical eye to check the authenticity of paintings.

Han van Meegeren even managed to fool one of the leading art experts of the time, Dr. Abraham Bredius, convincing him that a painting called ‘Supper at Emmaus’ was a previously unknown early work of Johannes Vermeer. Van Meegeren managed this feat by researching the artistic theories of Bredius and purposefully creating a painting that perfectly confirmed Bredius’ ideas.

The painting as part of Vermeer’s supposed early work was an easy excuse to explain any inconsistencies with Vermeer’s other paintings and the inexorable discrepancy between Vermeer’s talent and van Meegeren’s. After the painting was accepted by Dr. Bredius, it was sold in 1937 for what would today be four million dollars. This huge success only incentivized Han van Meegeren to forge even more paintings.

One of the most powerful figures in the Nazi Party, Hermann Göring, once traded a whopping 137 paintings for just one of Han van Meegeren’s Johannes Vermeer forgeries and Göring even lauded it as one of his most prized artworks. Due to van Meegeren’s impressive talent, peddling his forged masterpieces made him wealthier than he could’ve ever imagined. His wealth allowed him to live a more than comfortable lifestyle, buying a twelve-bedroom apartment for himself in Nice, France, and infamously owning fifty-seven properties.

After the war ended in 1945, van Meegeren was promptly arrested for selling what was believed to be Dutch cultural property to the Nazi Party. This association with Nazi Germany was considered to be treason by the Dutch government and Van Meegeren faced nothing short of the death penalty for these charges. Han van Meegeren’s trial began on October 29, 1947 in Amsterdam. A group of art experts, including professors, curators, and doctors, were asked to provide their expertise for the Dutch court.

The group was led by Paul B. Coremans, the director of a chemical laboratory at the Royal Museums of Fine Arts of Belgium. The experts each examined a number of supposed Frans Hals and Vermeer paintings. After the examinations, Dr. Coremans could determine the chemicals used in the paints. Luckily, van Meegeren’s methods weren’t perfect. Dr. Coremans found that the paints were mixed with twentieth-century paint hardeners, bottles of which were found in van Meegeren’s house.

Despite the strong evidence of art forgery that Dr. Coremans discovered, the court was still skeptical about the authenticity of the paintings. Han van Meegeren attempted to save himself by admitting to the crime and explaining his exact art forgery process, but, worried about his reputation, the art expert Dr. Abraham Bredius stubbornly maintained his original opinion that the paintings were authentic. If it was exposed that Dr. Bredius incorrectly identified forged paintings as genuine, his career would suffer disastrously.

Without any other options left to turn to, van Meegeren created a new “Vermeer” under the observation of Dutch authorities and presented it at his trial, and luckily for van Meegeren, the exhaustive art forgery task finally managed to convince the court. Han van Meegeren was acquitted of his treason charges and sentenced to one year in prison for committing fraud.

Although the court didn’t find van Meegeren guilty for colluding with the Nazis, whether or not he actually did is still unclear. Van Meegeren certainly seemed to hold his own fascist apologetic ideology and he did indeed turn his eyes from the atrocities the Nazis committed for his own monetary gain.

Whether or not a collaboration took place between van Meegeren and the Nazis is still up for debate. After the famous trial his image was rebuilt and the people of the Netherlands considered van Meegeren to be a bit of a hero. Outwitting the Nazis was not a small accomplishment and it was a very honorable one in the eyes of many.

Thanks to van Meegeren’s newfound fame and notoriety, his paintings became valuable once again in a new light. This led to his art forgery being, in turn, forged again, the fakes posing as genuine van Meegeren’s, this time by van Meegeren’s own son, Jacques Henri Emil van Meegeren.

However, whether van Meegeren was guilty or not didn’t really matter in the end. On December 30, 1947, Han van Meegeren died due to a heart attack while in a prison in Amsterdam, only two months into his one-year sentence. He was only fifty-eight years old.

By Jessica JacobCertified AnthropologistJessica is an anthropologist based in Charlotte, North Carolina. She worked with the University of North Carolina at Chapel Hill and the University of North Carolina at Charlotte on various anthropological projects ranging from Native American archaeology to biology, ecology, and ethnography. Her research has been published in the American Journal of Physical Anthropology and recognized by the Enquirer Journal. Her areas of interest are paleoanthropology, human evolution, art history, ethnography, and prehistoric art.

5 Art Forgers Who Made Their Way To Fame