HomeStoriesHow The Mona Lisa and These 4 Famous Artworks Were Never Finished?

How The Mona Lisa and These 4 Famous Artworks Were Never Finished?

While you might think unfinished artwork wouldn’t be museum quality, many of the most famous artworks we know and love today were never fully completed. 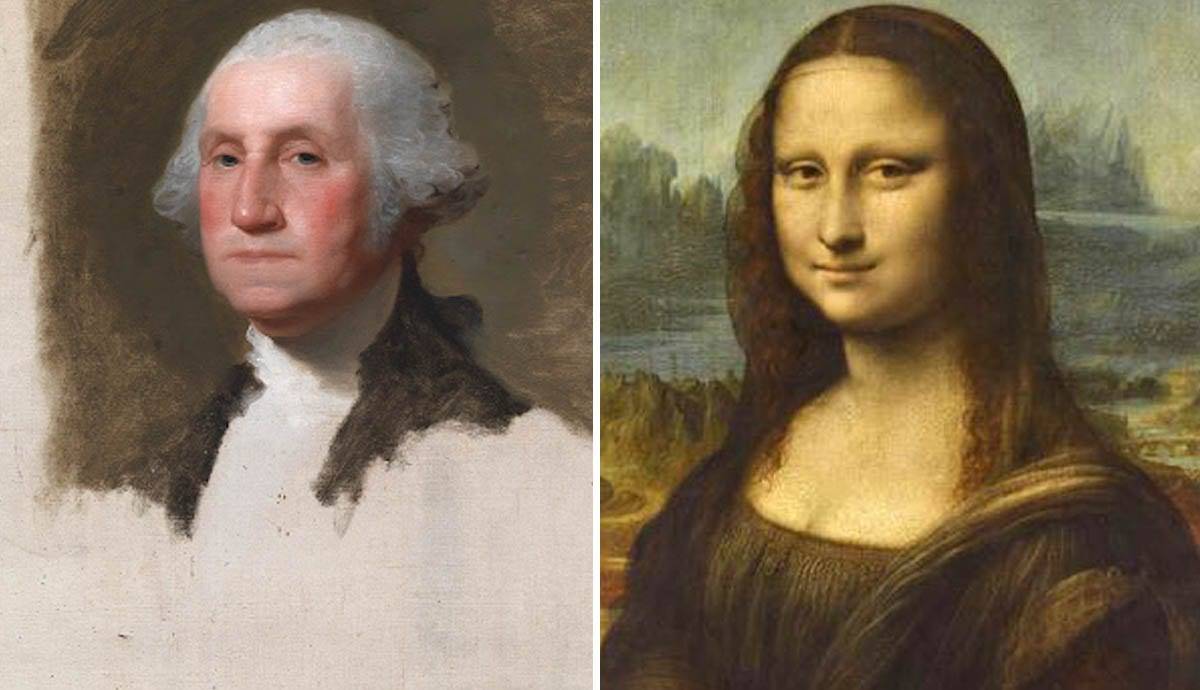 Some of the most famous artworks adored by millions all over the world were never actually finished. Either from an intentional artistic choice, a lack of resources, or the artist’s death, some of the most iconic pieces were left half done. From the presidential portrait on the US dollar bill to the Mona Lisa, these five artworks were never fully completed.

This sculpture, created by the infamous Michelangelo, was created as part of a series of incomplete sculptures, each one at a slightly different level of completeness. ‘The Awakening Slave’ is the very first sculpture in the collection, and perhaps the most striking. A male figure is clearly defined within the marble, but the positioning of the body and the chunks of untouched marble that surround it seems to, as the name suggests, trap the subject. The body seems to be trying to break free from its marble prison, forever frozen in the rock. Michelangelo’s masterful understanding of anatomy is on display, the detailed shadow of bones and muscles appearing distinctly human. While the torso and legs are exposed, the figure’s hands and head remain buried within the stone.

Michelangelo famously spoke on his work, saying “Every block of stone has a statue inside it and it is the task of the sculptor to discover it,” a sentiment that ‘The Awakening Slave’ only works to reinforce. In his eye, the marble wasn’t chiseled into the statue, but rather the inessential marble was simply removed to reveal the preexisting figure. Unlike other sculptors at the time, Michelangelo didn’t use a plaster mold to make his works and instead freehanded his masterpieces. Michelangelo’s phenomenal artistic talent is astonishing and his intentional choice to leave the piece in its incomplete state shows his incredibly creative conceptual genius.

After news broke that suggested the end of World War II was near, Dutch painter Piet Mondrian began working on a new painting. He was well known for his beautiful paintings, mostly consisting of white, red, blue, and yellow squares and rectangles. His famous artworks are exhibited all over the world, including at the prestigious Museum of Modern Art in New York City. Unlike his other paintings, his celebratory ‘Victory Boogie-Woogie’ was never finished, and unfortunately, that wasn’t the result of an artistic choice of Mondrian’s. The artist had been suffering from pneumonia when he died on February 1, 1944. He was seventy-two years old.

Nevertheless, the painting still holds with it Mondrian’s lively emotion. The primary colors stand out brightly against the white canvas, the blocks of color almost dancing with excitement and hope for the Allied victory. Throughout his life, Mondrian spent time living in Paris but decided to leave in 1938 due to the impending invasion of Nazi Germany— an event Mondrian expected after Hitler’s invasion of Czechoslovakia. Mondrian moved to London but was forced to flee after just two years due to the bombings. He then moved to New York, New York in 1940, where he was finally free from German attacks.

The whole world was buzzing when the end of the war was in sight. With the good news, the world could finally sigh of relief, and Piet Mondrian’s reaction was no different. Just from looking at the painting, his anticipation is palpable. Although it remains incomplete, the colors hold with them the elation of us all. Some of the worst atrocities in human history would finally be over. Through ‘Victory Boogie-Woogie’ the eagerness and delight for that light at the end of the tunnel can be felt, even almost eighty years later.

Elizabeth Shoumatoff was a Russian-American painter born in Kharkiv, Ukraine on October 6, 1888. In 1917, she moved to the United States and made a name for herself through painting professionally. She was best known for her portraiture work and created over 3,000 portraits in her lifetime. Her subjects included the prominent Du Pont, Woodruff, Mellon, and Frick families as well as President Lyndon B. Johnson and his wife, Lady Bird Johnson.

In 1944, Shoumatoff was to paint another president of the United States, this time it was Franklin Delano Roosevelt. Commissioned by Roosevelt’s mistress, Lucy Rutherford, Shoumatoff met him at his home in Hyde Park, but unlike many portraiture artists never required her subjects to sit still. She encouraged them to resume their normal activities, resulting in a much more candid and intimate portrait.

The following year, Shoumatoff was asked again by Rutherford to paint a second portrait at the Little White House in Warm Springs, Georgia. Unfortunately, Roosevelt’s health was taking a turn for the worse at the time, so Shoumatoff had to act quickly. Over the course of three days, Shoumatoff painted him, having photographer Nicholas Robbins take reference photographs for her. The first two days went well, sketching, chatting, and painting as expected.

However, on the third day, April 12, 1945, the president was in a rush with a full schedule ahead of him. Shoumatoff began applying the color, remarking afterward that he had “exceptionally good color” that day and was in a good mood.

She began applying the color hurriedly when Roosevelt said, “We have fifteen minutes more to work,” according to Shoumatoff these were his last words. “Suddenly, he raised his right hand and passed it over his forehead several times in a strange jerky way, without emitting a sound, his head bending slightly forward,” Shoumatoff recounted. Roosevelt then collapsed. He died just three hours later due to a cerebral hemorrhage.

The death of the president in these unusual circumstances, for better or for worse, cast a huge spotlight on Shoumatoff and her famous artworks. Being quite a shy person, the fame was particularly difficult for her to deal with. Although the opportunity was certainly there, Shoumatoff did not want to profit from the situation and promptly donated the portrait to the Little White House Foundation. It is still there to this day.

Shoumatoff eventually finished a similar portrait of Roosevelt, but the unfinished one remains the most popular. The familiarity of a powerful world leader that helped the Allies win the war is juxtaposed with that of a man staring straight into the face of death. His greying hair is neatly combed and he is dressed formally, in a suit, tie, and coat.

The painting captured the clear stress and fatigue accompanying him and the reality of how much weight he had to bear. He was both a sick man suffering from polio and one of the few people that the world had left to rely on. Since Elizabeth Shoumatoff never sold the famous artwork, the exact monetary value of it is unknown, but it’s certain that the look in Roosevelt’s eyes is priceless.

Although you may not recognize the name, you’ve definitely seen the famous artworks of Gilbert Stuart. Considered to be one of America’s best portraitists, Stuart was from the Rhode Island Colony and his subjects included Dolley Madison, Anne Willing Bingham, Martha Washington, Thomas Jefferson, and even George Washington. While Stuart was a very skilled painter, he was also quite eccentric. Stuart was a procrastinator and often abandoned pieces that bored him. He was paid well for his famous artworks but frequently neared bankruptcy. He even managed to annoy John Adams, who sat for Stuart repeatedly.

After landing his dream subject, George Washington himself, Stuart ended up struggling to work with him. The painter tried to engage with his subjects during the long and tedious task with jokes and lively discussion, but, at least according to Stuart, Washington was a rather boring conversationalist. As Stuart put it, “An apathy seemed to seize [Washington] and a vacuity spread over his countenance, most appalling to paint.” Despite the difficulty, he completed the iconic Lansdowne portrait, a life-sized painting of Washington, in 1796, the president’s final year in office.

In 1869, Stuart’s painting of George Washington graced the front of the US one-dollar bill for the first time, though the bill looked a lot different than it currently does. However, one thing hasn’t changed. The ever so popular ‘Athenaeum Portrait’ is still used on the one-dollar bill today.

While the masterpiece certainly doesn’t appear unfinished, The Mona Lisa, one of the most famous artworks of all time, is indeed incomplete. Leonardo Da Vinci was quite successful during his time, but like Gilbert Stuart, Da Vinci was a procrastinator. He would spend decades working on just one, singular artwork. He was even known to stare at paintings of his for long periods of time, add one tiny brushstroke, and then walk out of the room.

Eccentricities aside, Da Vinci was an incredibly talented artist. He used his advanced understanding of science to make his famous artworks anatomically correct and incredibly realistic. To be able to perfect his life-like portraits, he had to first fully understand the human body. To do this, he performed several autopsies. At first, he did so through illegal means but eventually was granted permission to dissect bodies and sketch his findings for medical purposes.

Da Vinci began working on the Mona Lisa in 1503 and continued refining it until fourteen years later in 1517. He paused work on the painting, likely due to arm injuries, but the artwork was never returned because of Da Vinci’s premature death in 1519. He was only sixty-seven and died from a combination of old age and illness, possibly a stroke.

Despite the years of work, the painting was never finished, Da Vinci was never paid for his work, and it never went to the client that originally commissioned it. Nevertheless, the painting has survived hundreds of years to become one of the beautiful famous artworks we know and love today.

The Legacy of Unfinished Famous Artworks

While the celebration of incomplete artworks may seem odd at first, they have indubitably made a substantial impact on the art world. The technique, intentional or not, is called Non-Finito and stems from the Italian for “not finished”. The charm within incomplete art is undeniable, and as any artist will be able to tell you, a large portion of artworks, arguably the majority of them, go unfinished. From the eyes of President Franklin D. Roosevelt just before his death to Michelangelo’s slaves frozen in marble to the Mona Lisa, unfinished art is everywhere and is an integral part of the art as we know it.

By Jessica JacobCertified AnthropologistJessica is an anthropologist based in Charlotte, North Carolina. She worked with the University of North Carolina at Chapel Hill and the University of North Carolina at Charlotte on various anthropological projects ranging from Native American archaeology to biology, ecology, and ethnography. Her research has been published in the American Journal of Physical Anthropology and recognized by the Enquirer Journal. Her areas of interest are paleoanthropology, human evolution, art history, ethnography, and prehistoric art.

Mona Lisa: How Did She Get To Be So Famous?