HomePhilosophyHenri Bergson’s Philosophy: What is the Importance of Memory?

Henri Bergson’s Philosophy: What is the Importance of Memory?

For Henri Bergson, human consciousness and perception are primarily oriented towards action. He examines the significance of memory to the way we see and move in the present. 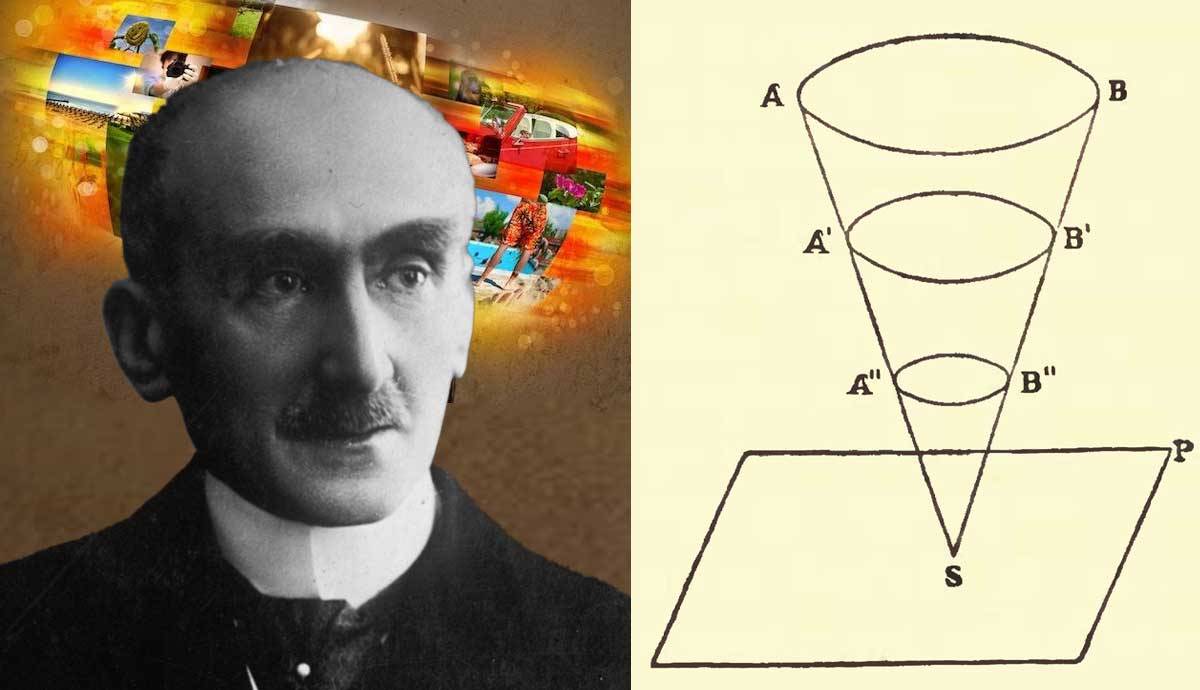 Henri Bergson’s philosophy forms an early outpost for many of the ideas, and interdisciplinary approaches, that would define the philosophy and critical theory of the later 20th century. His melding of psychology, biology, and often lyrical philosophy questioned static conceptions of truth, and philosophy’s framing of consciousness as an instrument of contemplation. Preferring a conception of the human being as an active participant in a moving world of images, Henri Bergson places memory at the center of our animal consciousnesses.

Bergson sees the understanding of memory as an oft-overlooked foundation of philosophy: frequently either entirely ignored or else reduced to either the purely contemplative anamnesis of Plato, or as a simple accumulation of perceptual images. Henri Bergson rejects both of these attitudes in favor of a view that places memory at the center of consciousness and perception, while also firmly establishing its unconscious breadth.

Henri Bergson on the Difference Between Pure Memory and Sensation

For Bergson, the present is utterly unlike the past, insofar as it is defined by the whole body, it is necessarily ‘sensorimotor’ in nature. The present straddles the influence of the immediate past, and the determination of the immediate future, consisting of both perceptions and actions, occurring in definite places in the body.

Pure memory, meanwhile, is constrained to the mind, and does not contain the same unity of the sensory and the motor. The recollection of pure memory might begin to stimulate sensations in definite parts of the body (the more vividly I remember a pain in my foot, the more such a pain might begin to take hold in the present), but this is not the nature of the pure memory itself, which occurs in no definite part of the body, and does not consist in either sensation or image.

Images, for Bergson, are the territory of the present moment. For this reason, he refers to the body as an image, one amongst others, but endowed with the power of spontaneous action.

In short, what distinguishes embodied consciousness from the images that surround it is the power to act unpredictably. But images, though they might linger, do not extend beyond the sensations of the present: the moment at which consciousness meets the world. Pure memory, therefore, is something other than imagery, it constitutes the unconscious: a space outside momentary consciousness but in constant, dynamic interrelation with it.

Bergson anticipates objections doubting the possibility of our holding onto pure memory in some unconscious part of the mind. He identifies this objection with a more far-reaching fault in widespread philosophical thinking, claiming that philosophy at large has become wrongly convinced of the total relevancy of consciousness to goings on within the mind.

Underpinning this notion – that we are always conscious of all our knowledge, even the most fleeting memories, and that these memories are therefore held in mind just like the sensations of the present moment – is another, even more foundational, error. This error consists in presuming that consciousness only accidentally relates to the actions and sensations of the body, and that its more basic or essential function is speculative or contemplative.

On such an account, Bergson acknowledges, it makes perfect sense that we would fail to see why consciousness would leave pure memories in dark corners, recollecting and actualizing them only when relevant or useful. If, however, we imagine that consciousness is essentially oriented towards action and the present, orchestrating what is useful and what decisions should be made, it is quite plausible that there might be unilluminated things, pure memories, within the reach of consciousness but not already made actual by it.

The other significant consequence of Bergson’s theory of memory is its proposed explanation of the origins of ideas. Bergson spends much of his chapter in Matter and Memory discussing the persistence of memory sketching two opposed schools of thought: ‘conceptualism’ and ‘nominalism’. Putting aside the other connotations of these terms, conceptualism for Bergson consists in the belief that we begin with general ideas, or categories, of objects and their qualities, and proceed – through experience – to find these ‘genera and qualities’ in the objects we perceive. Nominalism, conversely, has us going out into the world, and first noticing different, individual objects, and grouping these under names, whence the names of genera and qualities.

Bergson argues that these opposing views are not so much in disagreement as part of the same circle: conceptualists need us to have first looked at individual objects in order to create relevant genera, and nominalists need us to have powers of abstraction, and some kind of pre-existing categories, to even begin noticing resemblances between individualized objects. Bergson’s solution to this circularity is again reliant on his insistence that consciousness is primarily oriented towards useful action.

Bergson proposes that it is not so much differentiated individual objects that we first perceive, from which we begin to abstract perceptions, but rather resemblance itself. He explains this by way of a series of analogies, each of which establishes this perception of resemblances as automatic and instrumental rather than based on abstraction. Indeed, in Bergson’s model, no abstract category is required to begin noticing and acting upon resemblances between objects in the world.

The analogies – first to chemical reactions, then to a plant extracting nutrients from the soil, and then to an amoeba seeking chemical compounds in its environment – all describe a perception which discards that which is not useful to it, which discerns only the relevant commonality insofar as it is instructive for acting and survival.

In another instance, he suggests that for the grazing animal, grass might be identified by its color and smell, not because the animal has an a priori concept of these things, nor because it abstracts these categories consciously, but because successive memories of grazing discard those details which differ, and retain resemblances.

From this perception of resemblance, we can both begin to abstract and to differentiate, but the circularity Bergson initially described is broken. With abstraction and recollection – the construction of general ideas – consciousness leaves behind its strictly automatic, even chemical, action and attains its more characteristically human operation.

Bergson, however, wishes to stress that reflection, and general ideas, remain secondary to action and bodily function. Reflection and memory allow us to operate on something more than pure impulse: we are not merely chemical compounds (for Bergson, the distinction is only that we make unpredictable decisions), but we would do wisely not to be dreamers either, living only in memory and contemplation.

Bergson’s model for the construction of general ideas introduces his spatial diagrams, which appear periodically throughout Matter and Memory. These diagrams seek both to establish the reality of memories and objects outside of actualized present, and to tether the unconscious world of pure memory to the experience of the sensory present.

Most famously, Bergson presents an inverted cone meeting a plane at its point. The plane is the world of objects, and the base of the cone the world of pure memories, which telescope up and down the cone, according to the demands of conscious action, towards and away from the point where the cone meets the plane. This meeting point is the conscious present, where memories are actualized, and objects perceived.

This diagram is intriguing, along with the others clustered throughout chapter three of Matter and Memory, insofar as it seems unnecessary to the explanation it facilitates, and insofar as it adds to this explanation highly specific connotations of space and movement.

Rather than treating these diagrams as tangential to his philosophy, however, Bergson centers the model of the cone, returning to it later in the chapter to propose a more detailed version of it, with circumferential rings on the cone indicating various hybrid states: part-image and part-memory. What comes out of this insistence is a sense that the spatial metaphor is essential, and even a sense that the diagram and the movements it implies are a more truthful and direct presentation of Bergson’s theory of memory than his words alone can be.

Bergson’s philosophical project consists, in large part, of treating humans much more like animals than philosophy has tended to. Although he upholds the complexity of human minds and acknowledges our capacity for purely reflective thought or recollection, he notes that in everyday life, consciousness instrumentalizes its perceptions, recollections, and reflections to perform actions useful to it. This process, though not identical, he establishes as firmly analogous to animal, plant, and even chemical processes.

The conventional demarcation between the contemplative human mind and the rest of the organic (and inorganic) world is abandoned in favor of a human animal, driven to generate concepts and categories to serve the needs of the body more than the ends of pure contemplation. The very fact that consciousness has access to a wealth of memories that it does not ordinarily actualize clarifies for Bergson that consciousness uses memory as an instrument of action and survival first and foremost.

In the act of theorizing the human being as an animal, with specific capacities, reactions, and bodily needs, Bergson draws a thread between his philosophy and others (Spinoza and Nietzsche figure prominently), before and after him, who practice philosophy as what Gilles Deleuze calls ‘ethology’: the study of animal behavior. Thus, Bergson is adamant that memory and abstraction alike are pragmatic in the first instance. Rather than oriented towards contemplation as an end in itself, they are grounded in action.

This is not, however, a philosophy of disillusionment. Within these utilitarian structures of mind and body, the actions and reactions of bodily survival, Bergson finds flashes of geometric beauty: constellations of memory, streams of ceaseless motion, and telescopic oscillations of memory. It is hard, then, to quite believe that these observations and spatial metaphors – which Bergson speaks of unabashedly as true, are merely a secondary function of mind.