HomePhilosophyNietzsche: A Guide to His Most Famous Works and Ideas

Nietzsche’s philosophy is a latticework of recurring ideas and radical rejections. This article maps some of Nietzsche’s most famous ideas and unfolds the complex relationship between them. 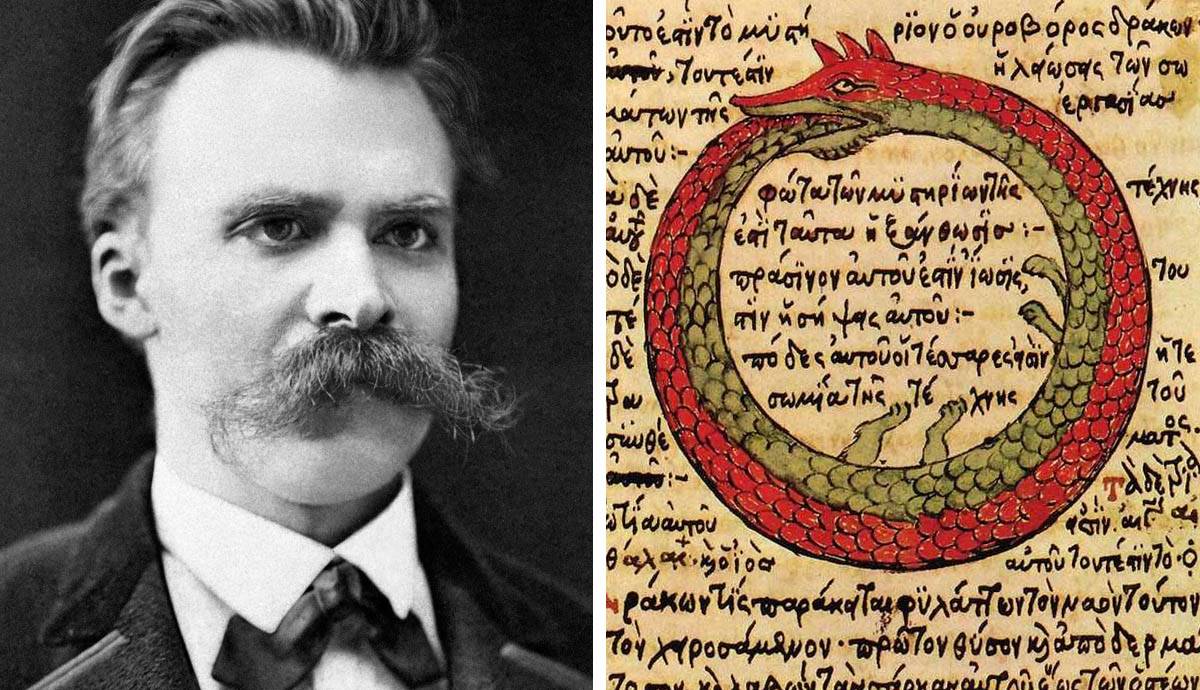 Now one of philosophy’s most renowned figures, Friedrich Nietzsche’s winding and deeply unconventional philosophy was largely ignored and dismissed in the decades following his death. Nietzsche strove furiously against what he perceived as the poisonous strictures of modern Christian morality, seeking to erect in their place an ethics of aesthetic jubilation. Though Nietzsche’s writing is extremely broad in scope and ranges across a great number of philosophical disciplines, a number of central ideas recur throughout many of his books. These ideas, which often crop up in a variety of contexts are threaded complexly into one another, and merit scrutiny and explanation.

In On the Genealogy of Morality, Nietzsche tries to unpack where modern ideas of morality came from, and what the vocabulary of conventional Christian morality actually enforces. In doing so, Nietzsche traces a distinction between two different oppositions through which we can view the world: “good and bad” and “good and evil”. Though the two sound more or less interchangeable at first, Nietzsche uses these pairings as a lens through which to critique the origins of Christian morality. As in much of Nietzsche’s philosophy, these two sides (good and bad and good and evil) are associated with a constellation of other oppositions. “Good and bad” are the assessments of the master, the aristocrat, and the powerful, while “good and evil” reflect the morality of the slave, the resentful, and the weak.

For Nietzsche, “good and bad” reflect the judgments of a self-possessed individual. For the master, a thing is good if it is conducive to that person’s flourishing, and the increase of their power. Thus, victory in battle is “good”, insofar as it edifies one’s strength, but bountiful feasts and pleasurable company are also good, as is art. For the master, that which is “bad” is simply all that is detrimental to pleasure, flourishing, and self-directing power. To act badly, in this view, is to do something unwise or counterproductive, but it is not the wellspring of guilt that “evil” is.

Ressentiment and the Morality of the Slave

The alternative vocabulary of “good and evil” is meanwhile built not on the tastes and interests of the powerful, but on the ressentiment (a word which implies not only resentment but also repression and one’s own inferiority), of the weak. The notion of evil, for Nietzsche, is a rationalization of the resentment of those who don’t have power, taste, or wealth towards those who do. While “good and bad” is focused wholly on the interests and nature of the self-directing individual, “good and evil” makes an appeal to the interests and nature of an external beholder. Most importantly, for Nietzsche, the beholder conjured by this notion of evil is God. Nietzsche’s ethics is in opposition to most other moral philosophies, but especially to Kantian deontology, which describes acts as absolutely good or evil.

God functions as a kind of transcendental scoreboard for actions and, Nietzsche argues, can be used as the justification for laws that disavow the worthiness of pleasure, power, and art as goals, instead rewarding the virtues of the oppressed, powerless, poor, and kind. Thus, for Nietzsche, the morality of “good and evil” is both the morality of slaves, who resent their masters’ power and wealth, and of Christianity, which makes virtues of what the Homeric aristocrat calls “bad”. For Nietzsche, Christianity is a religion of self-denial, born out of the psychological needs of those unable to achieve power and status, which perpetuates “bad conscience”: the psychic turmoil of aggression caused by refused expression.

The Will to Power and the Übermensch: Nietzsche’s Philosophy of Self-Creation

Nietzsche’s criticism of “slave morality” is deeply intertwined with another of his most famous and enigmatic concepts: the will to power. The will to power, which explicitly invokes Schopenhauer’s “will to live”, describes in Nietzsche’s philosophy the drive towards self-mastery and creativity. Though the idea has become infamous for its co-option in fascist rhetoric, Nietzsche is keen to distinguish power from mere force. Power, for Nietzsche, describes a web of interlinked states and practices which orbit the process of aesthetic self-creation. Nietzsche explicitly distinguishes the will to power from merely seeking to be in a position of power. The will to power is instead a creative exercise, a process of self-transformation and artistry.

Nietzsche also imagined a figure who achieves this radical self-creation implied by the will to power: the “übermensch” or “overman”. The übermensch is a frequently misunderstood part of Nietzsche’s work and has contributed to much suspicion of Nietzsche for potentially being a proto-fascist. Indeed, the übermensch is presented as self-directed and powerful in contrast with the conventional, kind morality of Christian weakness. It is worth noting, however, that Nietzsche conceives of the übermensch as a necessarily solitary figure, not as a member of a powerful or privileged class, and the kind of power which defines this figure in Nietzsche’s work is more poetic than martial.

Nietzsche wrote prolifically throughout most of his life, producing relatively little conventionally written philosophy but a great volume of essays, aphorisms, fiction, poetry, and even music. Many of Nietzsche’s most famous ideas are developed through a series of his works, appearing again and again — often in different guises or with subtle alterations. As such, it is difficult to offer a convincing hierarchy of importance within Nietzsche’s oeuvre but Thus Spoke Zarathustra (1883) is perhaps his most notorious and — albeit unconventionally — encyclopedic work. Zarathustra is the fullest picture Nietzsche offers of the Übermensch: a figure who speaks poetically, oversteps social mores, and pursues beauty above all else. The book follows the Christlike Zarathustra through a series of highly stylized passages, each presented as a cryptic sermon delivered by Zarathustra himself.

One of the ideas which features prominently in Zarathustra is the eternal return, or eternal recurrence: the notion that time runs circularly, eternally fated to repeat itself. Perhaps the most famous formulation of the eternal return, however, appears in The Gay Science (1887) in a passage titled The Greatest Weight.

Here, Nietzsche offers the eternal return as a kind of thought experiment. He asks us to imagine that we are visited one night by a demon (one of philosophy’s many) and that this demon reveals to us some fateful news about life. The demon says:

This life as you now live and have lived it you will have to live once again and innumerable times again; and there will be nothing new in it, but every pain and every joy and every thought and sigh and everything unspeakably small or great in your life must return to you, all in the same succession and sequence — even this spider and this moonlight between the trees, and even this moment and I myself…
(The Gay Science §341)

But what Nietzsche is really interested in is how we would respond to this news. The question he poses is:

Would you not throw yourself down and gnash your teeth and curse the demon who spoke thus? Or have you once experienced a tremendous moment when you would have answered him: ‘You are a god and never have I heard anything more divine’(The Gay Science §341)

The thought experiment unfolds a number of central concerns of Nietzschean philosophy. Perhaps most strikingly, the question is framed not as a consideration of a whole life of pleasures and pains, but as a matter concerning the very heights of ecstasy, and their capacity to justify an eternity of repetition. These rapturous aesthetic experiences frequently appear in Nietzsche’s writing as the highest aspiration of life: the occasional condition which justifies all suffering and banality. Zarathustra is cast as the archetypal creator and connoisseur of these sublime instants, and the Will to Power is, in large part, the drive and capacity to populate life with such experiences.

Nietzsche’s Love of Fate: What Is Amor Fati?

Another connected concern raised by the eternal return (which crops up again in Thus Spoke Zarathustra and Ecce Homo) is that of fate. Fate, or necessity, returns us to ressentiment, which for Nietzsche represents the basic pitfall of modern mental life. What our response to the demon tells us about is our attitude towards immutable facts. If we gnash our teeth and curse the demon, we curse necessity itself, we resent those conditions we are unable to alter. The eternal return directs us towards a love of fate — Nietzsche’s amor fati — rather than the refusal of it. If we are to call the demon divine, we must first embrace all that befalls us as necessary.

Above all, however, the demon leads us to reject Christian ethics; there is no use sacrificing this life for the sake of heavenly pleasure if we are instead to experience this life innumerable times again. The eternal return appears as the litmus test of Nietzschean ethics: a guiding light by which we should discern those actions which we sincerely will.

If we choose to act in ways which we would dread to experience again, then, Nietzsche suggests, we are shunning the masterful pursuits of power and ecstasy and inducing our own bad conscience. Nietzsche urges us to be ontologically responsible for our actions, to do them for their own sake. As Gilles Deleuze puts it in Nietzsche and Philosophy: “only will that of which one also wills the eternal return”, “eliminate […] everything which can only be willed with the proviso ‘once, only once’”.

It is difficult to know whether Nietzsche thought he had lived according to his own maxims. Nietzsche the man was by all accounts introverted and mild-mannered, bearing little external resemblance to the bombastic Zarathustra. Nonetheless, Nietzsche’s philosophy survives for us as the project of artistic self-creation par excellence. Nietzsche the philosopher is a picture of poetic imagination and radical subversiveness. In Martin Heidegger’s work, as well as later existentialist thought and in much of the writing now approximately titled post-structuralist (especially Deleuze’s philosophy), Nietzsche looms large as a skeptic of morality and even truth itself.

For Nietzsche, philosophy is the task of affirming life and the beautiful — of fleeing the shackles of repression and banality. The final words of Thus Spoke Zarathustra capture the will to power, not as cruel or violent but as brightly expressive: “Thus spoke Zarathustra and he left his cave, glowing and strong, like a morning sun that emerges from dark mountains.”