Have you ever stopped and wondered ‘what’s the point?’ If so, you’re not alone. In this article, we explore Albert Camus’ rebellious philosophy of the absurdity of life. 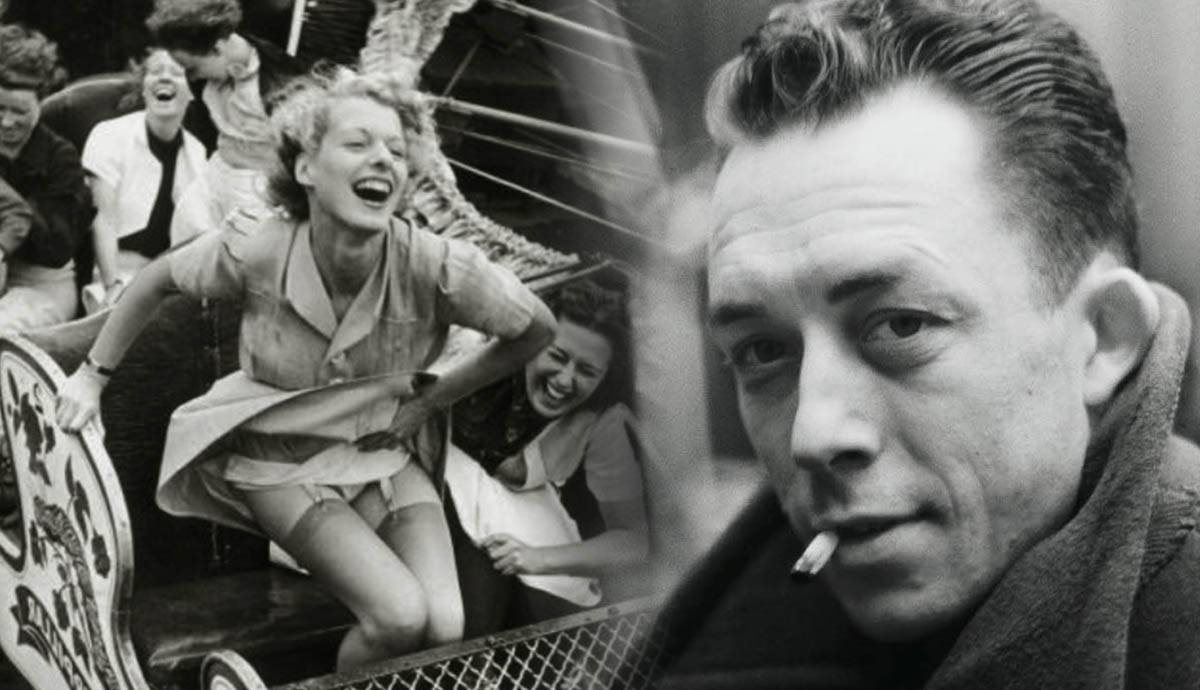 Albert Camus was born in Algeria, then a colony of France, in 1913. He was born into a poor but hardworking family. He studied philosophy at the University of Algiers, although he saw himself as a writer and artist foremost. He found success as a writer from the age of 22 when he published a collection of essays, from which he went onto writing novels that were so profound and innovative that he was awarded the Nobel Prize for Literature in 1957.

Taking inspiration from existential writers and philosophers of the likes of Friedrich Nietzsche, Albert Camus’ writing explored existential themes of disillusionment and alienation in a war-torn period in which people felt abandoned (by God) and without meaning. His major contribution to philosophy is his views on ‘the absurd,’ a nihilistic outlook on life which he explored in his essays, novels and plays.

The Myth of Sisyphus

“There is but one truly serious philosophical problem and that is suicide. Judging whether life is or is not worth living amounts to answering the fundamental question of philosophy.”
Opening lines, The Myth of Sisyphus (1942)

To understand what ‘the absurd’ is, we must first look at what Albert Camus’ considered to be an absurd existence. To do so he turns our attention to The Myth of Sisyphus in an essay published in a collection of essays under the same title.

Sisyphus is a Greek mythological figure who became infamous for cheating death, twice. As a punishment for breaking the natural order, Zeus condemned Sisyphus to roll a boulder up a hill only to watch it roll back down again. He was condemned to repeat this meaningless and arbitrary task for eternity.

Camus’ likens Sisyphus’ plight to our own existence. On one hand, we desire for and search for meaning in our lives. Yet, on the other hand, the universe offers a mute response. It is this combination of our desire for meaning and it being met with no satisfactory (or absolute) answer that arises in the absurd.

“It happens that the stage-sets collapse. Rising, tram, four hours in the office or factory, meal, tram, four hours of work, meal, sleep and Monday, Tuesday, Wednesday, Thursday, Friday and Saturday, according to the same rhythm – this path is easily followed most of the time. But one day the ‘why’ arises and everything begins in that weariness tinged with amazement.”
An Absurd Reasoning, The Myth of Sisyphus

Some of us know the feeling all too well. We find ourselves happy enough in our daily routine until one day the blinds collapse and we are left peering out at a world that makes no sense. Philosophers, artists and poets have long since asked the question: what is it all for? For Camus, the universe provides no answer. It is our sense of this predicament that Camus’ likens to a kind of awakening. So how should we react to the absurd?

Camus’ suggests that there are three possible responses to the absurd. We can either ‘quit’ (i.e. suicide), pretend it is not real (denial), or revolt against the absurd. For Camus, suicide is not an option because it is a form of escapism; it is a form of denial which is not a substitute for a solution. Denial, he argues, is not an option either because that is like lying to yourself. The only authentic solution to the absurd must be to revolt.

“You have already grasped that Sisyphus is the absurd hero.”
The Myth of Sisyphus

According to Camus, the absurd hero is almost indistinguishable from someone who has not yet awoken to the absurd. On any given bus or tram there may be one absurd hero going about their day, just like everybody else. The only difference is that the absurd hero knows about the absurd and lives their life despite (in fact, in spite of) it. Camus proposes that the only appropriate response to the absurd is to revolt against it; to live on with the knowledge of the absurd. That is, to continue living and searching for meaning, even though the universe will provide none. That is what it means to live absurdly.

Albert Camus says that it is this revolt that gives life its value. In knowing the absurd, the point of life is to live and to live freely. A consequence of living the absurd is knowing that there is no grand scale or absolute ideal by which we can measure the value of things. It is for this reason that Camus promotes quantity over quality in the way we live our lives. If there is no absolute ideal from which things can have value, the most we can do is find some kind of value in doing things for the sake of doing them. The goal, if there can be one, is to experience as much as possible.

For Sisyphus, he creates meaning by doing his task despite its meaninglessness. It is because of this that Camus states that “one must imagine Sisyphus happy.”

Of course, not everyone agrees with Camus. Even if one accepts the absurdity of life, there may be other ways of understanding it and responding to it.

The philosopher Robert Solomon (2006) asks: Is Albert Camus’ view heroic, or is it romantic? According to Solomon, there is an element of self-pity in Camus’ view that is overly romanticized in his response to the absurd. Even Camus’ use of the words revolt, defiance and rebellion all seem to have an artistic flair to them. It is no wonder then why poets, artists and rock musicians have long since been inspired by the rebellious philosophy of Albert Camus. It aims to inspire freedom, rebellion and hedonism as much as it provides a philosophical outlook on life.

One can also question whether the premises for Camus’ account of the absurd are rational. Do we really need for there to be a God or an absolute ideal outside of ourselves for life to have meaning? Many of today’s atheists, as well as some theists, will agree that we create meaning ourselves and that we do not infer meaning from some greater transcendent source.

Lastly, one can question whether the absurd is a problem that needs solving. Thomas Nagel, philosopher and commentator of Albert Camus’ views, proposes a new (and less serious) account of the absurd in his 1971 article, The Absurd.

“We cannot live human lives without energy and attention, nor without making choices which show that we take some things more seriously than others. Yet we have always available a point of view outside the particular form of our lives, from which the seriousness appears gratuitous. These two inescapable viewpoints collide in us, and that is what makes life absurd.”
The Absurd

Imagine you are having an especially tough week at work. You have obligations and deadlines up to your eyeballs and you are stressed beyond belief. At any given moment you are overwhelmed by the seriousness of your commitments. Now imagine that you’re lying in bed one night, mind racing, unable to rest. You get up out of bed and go outside to look at the stars. There you see thousands of stars stretched out before you, a small glimpse of the seemingly infinite array of distant worlds. It dawns on you that you and your goals, while important to you now, are insignificant in the grand scheme of things. You feel your shoulders relax and breathe a sigh of relief.

What this example shows is that humans have a unique ability to ‘view’ things beyond themselves. From a personal point of view, we see and feel the seriousness of our lives. However, we can also view our lives from outside of ourselves, which Nietzsche likened to a god-like perspective or what we may call a birds-eye view. From that point of view, we see how small and insignificant our lives are in the grand scale of history and place. According to Nagel, the absurd arises “by the collision between the seriousness with which we take our lives and the perpetual possibility of regarding everything about which we are serious as arbitrary, open to doubt.”

For Nagel, we do not need to invest all of our effort towards rebelling against the absurd. Instead, we can assume an attitude of ironic detachment.

“If […] there is no reason to believe that anything matters, then that doesn’t matter either, and we can approach our absurd lives with irony instead of heroism or despair.”

Having an attitude of ironic detachment need not mean that we ought to be apathetic. On the contrary, we should live our lives with purpose. However, we should also realise the absurdity of our actions in the grand scheme of things. It is between these two points of view that we experience the absurd.

Towards a Philosophy of the Absurd via Albert Camus

At this point you may be asking yourself; do I think that life is absurd? Perhaps you may think that life is intrinsically purposeful and therefore disagree with the aforementioned philosophies. In that case, you may wish to consider where that intrinsic purposiveness comes from (if not your own thinking). Even if one believes in a transcendent source of meaning, as Christian existential philosopher Søren Kierkegaard did, questions remain as to where that source got its meaning from and whether we can know with certainty what our life’s meaning is. You may even question whether these questions matter. You may decide that what matters is the belief that life, in some sense, is purposeful and meaningful.

On the other hand, perhaps you relate to Albert Camus or Thomas Nagel in believing that life is absurd. The question then remains as to how you wish to live your absurd life. Do you take the Camusian approach and revolt against the absurd, living a life of rebellion? Or do you take the Nagelean approach and live a life with an attitude of ironic detachment. Perhaps you agree with Solomon, who suggests that the problem of the absurd may be overly hyped and not a real problem at all. Whichever your response, you will have formed your own philosophy of the Absurd.