Are Movies Good or Bad? Henri Bergson vs. Gilles Deleuze on Movement

Henri Bergson proposed a philosophical attitude characterized by movement, and solving problems by being attentive to the constant shifting of things and ideas. Gilles Deleuze applies these concepts to cinema. 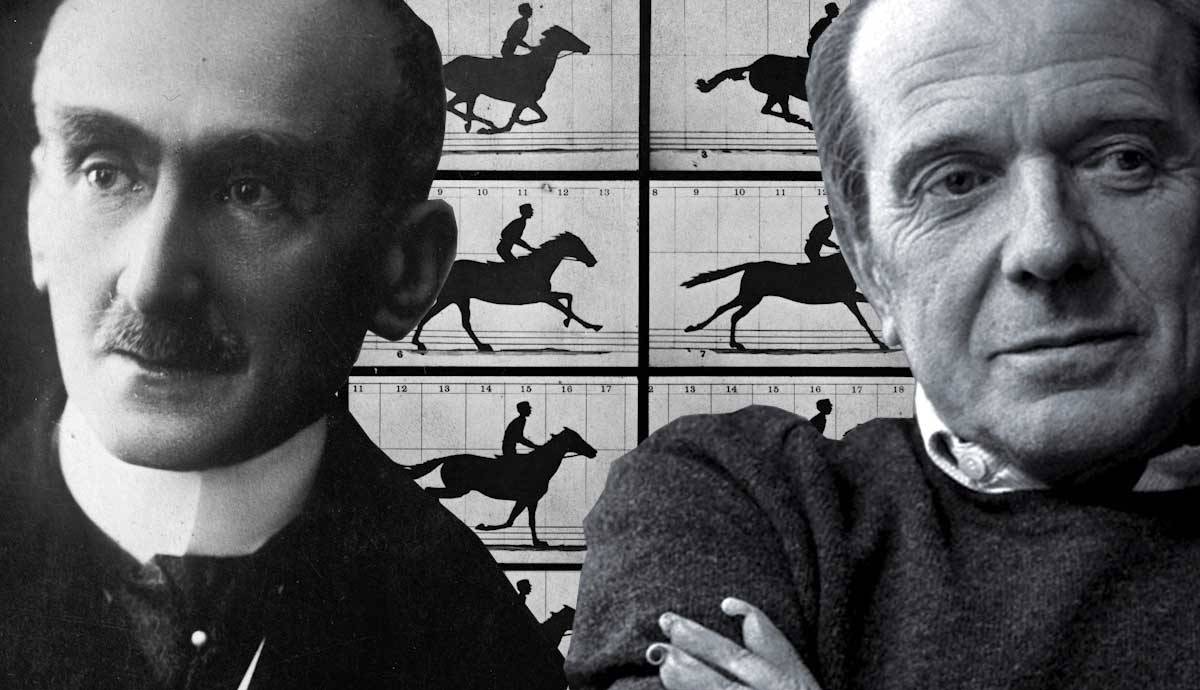 Philosophy is accustomed to talking about states of affairs: the way that things are, either always or at a particular moment. What both these cases, eternal truths and temporary circumstances, have in common is a presumption of stasis. This means that things are a particular way, or that objects are always in some particular place, and that the starting point for doing philosophy begins with  thinking hard and thoroughly about those objects and their states. Henri Bergson wrote instead about a world full of change and movement, where this kind of static thinking could offer only illusions and false security. To think about the world without these illusions, suggests Bergson, we need new philosophical methods and modes of representation that get closer to real motion.

The History of Motion: From Aristotle to Henri Bergson

Aristotle’s Physics records several paradoxes related to movement and plurality. These paradoxes, usually attributed to Zeno of Elea, concern the movement of objects and the problems that arise when we break movement down into a process of one moment after another. For example:

Zeno’s paradoxes are often spoken about in relation to infinity, but they also touched on another problem, one which would occupy Henri Bergson through several of his major philosophical works. The problem concerns what goes on between the smallest subdivisions of an object’s movement. While Parmenides (in Plato’s dialogue of the same name) concluded from these paradoxes that movement is illusory, Bergson drew the opposite conclusion, that movement is all there is, and that fixity is illusory.

No matter how small the intervals are at which we note the position of moving object, something is always going on between those intervals, something that is not represented in any of those single instants, nor even in all those instants placed side by side. The thing that’s happening between these instants is movement, pure movement (or ‘mobility’), and Bergson – particularly in Creative Evolution (1907) – seeks new ways of theorizing and representing pure movement, and to dismiss any representation of movement which subdivides it.

Henri Bergson identifies an essential mistake of philosophy in the tendency to describe and reconstitute reality as a series of fixed moments, plucked from ‘duration’ – Bergson’s term for the constant stream of changes reality undergoes through time. While he concedes that it is perfectly reasonable – and even unavoidable – that we rely on static memories and images ‘while action only is in question’, Bergson goes on to highlight where this way of thinking goes wrong:

“But when, in speculating on the nature of the real, we go on regarding it as our practical interest requires us to regard it, we become unable to perceive the true evolution, the radical becoming. Of becoming we perceive only states, of duration only instants, and even when we speak of duration and of becoming, it is of another thing that we are thinking.”
Creative Evolution, p. 273

Reality, says Bergson, is properly conceived ‘as a perpetual becoming […] It makes itself or it unmakes itself, but it is never something made.’ (CE, p. 272) The significance of this observation, which in many ways mirrors ideas raised by Alfred North Whitehead’s Process and Reality (1929), is that we can potentially dissolve all kinds of knotty philosophical problems, Zeno’s paradoxes included, if we get on board with the idea that reality is constantly caught up in a process of becoming.

Bergson suggests that there is a kind of liquidity to thought, when we examine it closely, which makes sure that it is always moving, and that when we try to stop or freeze thought into an unnatural shape, we are only substituting an illusion for reality. Bergson takes on an enormous and oft-repeated question as an example: ‘Whence comes it, and how can it be understood, that anything exists?’ (CE, 275) To dissolve the question – in Bergson’s terms, to reveal it as only a ‘pseudo-problem’ – he asks us to try to imagine ‘nought’, a total void in which nothing exists. What Bergson then points to, is that as we try to clear that conceptual space in our minds, something always flows in to fill the space it leaves, new thoughts or imagine objects which our minds jump between.

Rather than doing as much other philosophical writing would and ignoring this limit of thought, Bergson highlights it as an important observation about reality, thought is only part of the liquid existence of the world at large, something that flows into spaces and won’t stay still. The claim that we have paused our minds on the imaginary instant at which the void really is empty is nothing but a lie we tell ourselves, the kind of lie that might be occasionally useful for the sake of action, but only gets in the way when doing philosophy. That is, when trying to think about a world that cannot be paused, and in which voids are always already filled, as naturally as the mind fills our image of one.

To investigate what kinds of thinking Bergson thought of as illusory, it is worth looking at his controversial example of immobile representation: cinema. Bergson distrusted films. He distrusted them because he thought they could not show us movement, only a hideous illusion of it. The film is of course composed of frames, what Bergson calls ‘immobile sections’, which fix the world in a still instant (though one wonders how much Bergson had thought about the rolling shutter, he speaks more truthfully about the videos of today). These immobile sections are, in the film, simply flashed one after another at us. Between immobile sections, Bergson notes, we conjure into being the illusion of movement, the elusive force or property by which immobile sections of the world constantly transform themselves.

For Bergson it is hugely important that we get access to actual movement rather than just measly old immobile sections. At several points Bergson tries to tell us how we might start to visualize movement, offering for example:

“Let us, then, rather, imagine an infinitely small elastic body, contracted, if it were possible, to a mathematical point. Let this be drawn out gradually in such a manner that from the point comes a constantly lengthening line. Let us fix our attention not on the line as a line, but on the action by which it is traced. […] Finally, let us free ourselves from the space which underlies the movement in order to consider only the movement itself, the act of tension or extension; in short, pure mobility. We shall have this time a more faithful image of the development of our self in duration.”
Bergson, ‘Introduction to Metaphysics’ (1903)

Even this highly abstract, and rather challenging, effort of imagination is found lacking by Bergson, for whom ‘duration’ – in which the mind perceives the passage of time and movement – is characterized by a simultaneous unity and multiplicity. If the elastic image captures the unity of a single movement, it fails to represent the spectrum of qualities and colours that suffuse experience. In Bergson’s resolute estimation: ‘The inner life is all this at once: variety of qualities, continuity of progress, and unity of direction. It cannot be represented by images.’ (Bergson, ‘Introduction to Metaphysics’)

Bergson’s theories about movement and representation did not die with him. Most notably, they were picked up by Gilles Deleuze in Cinema 1: The Movement Image (1983), which uses Bergson’s own arguments to propose, contra Bergson himself, that films do offer a way of representing pure mobility.  What makes the film all the more special is its novelty: the technological character of our newfound ability to produce (moving) images of movement.

For Bergson, the film is like a bad dream Zeno might have had, a series of immobile tableaux with nothing between them. Bergson asserts that there exist no means of summoning a connective tissue. No matter how much we may move restlessly between successive frames, we can at best conjure another immobile frame (‘a third view’; CE, 307) between our initial two. But Deleuze dismisses this ‘overhasty’ appraisal of cinema as merely a bad dream, and finds in the restlessness of frames, which are always in-between one moment and another, the visual transcription of duration which the ‘movement image‘ always aspired to be. Meanwhile a solution presents itself within Bergson’s own resolution to Zeno’s paradox, which consists in claiming that the arrow is never really in a given position, insofar as it is moving:

“But the arrow never is in any point of its course. The most we can say is that it might be there, in this sense, that it passes there and might stop there. It is true that if it did stop there, it would be at rest there, and at this point it is no longer movement that we should have to do with.”
Creative Evolution, pp. 308-9

We might by the same token suggest that the frame is never at rest except when it is paused upon, and then it is not in movement, the roll of film is the material movement of the film, and each frame marked by the durational fissure of the rolling shutter.

Deleuze offers just this argument throughout Cinema 1, maintaining that films themselves are no more films when we watch them as a slideshow of frames than an arrow is moving when we contemplate it at rest in a series of successive positions. The very “filmness” of films, in other words, relies upon their being in motion. At the same time, and this is what is essentially novel about film, the breadth of the cinematic eye allows this animation to be fused with multiplicity – of shots, colors, characters, and settings, able to all move independently of one another and simultaneously – in just the way Bergson ruled impossible.

While the 20th century had already seen, most notably in Walter Benjamin, advocacy for the special new relationship between cinema and the world, Deleuze sees the significance of film as lying beyond politics and world-making. The unique closeness of cinema and reality raised new possibilities for Deleuze, chief among them the idea that cinema paved the way for new reflections on time, action, perception, and change. The promise, in short, that films could prove a better way to think through philosophical problems than the often-static language of conventional metaphysics. The fluid fictions of film turn out more trustworthy than the stuttering course of reason.