HomePhilosophyWhat is Time? St Augustine on Temporality and Consciousness

Time is notoriously difficult to define. St Augustine knew this and tried to explain it anyway by linking time to human consciousness. 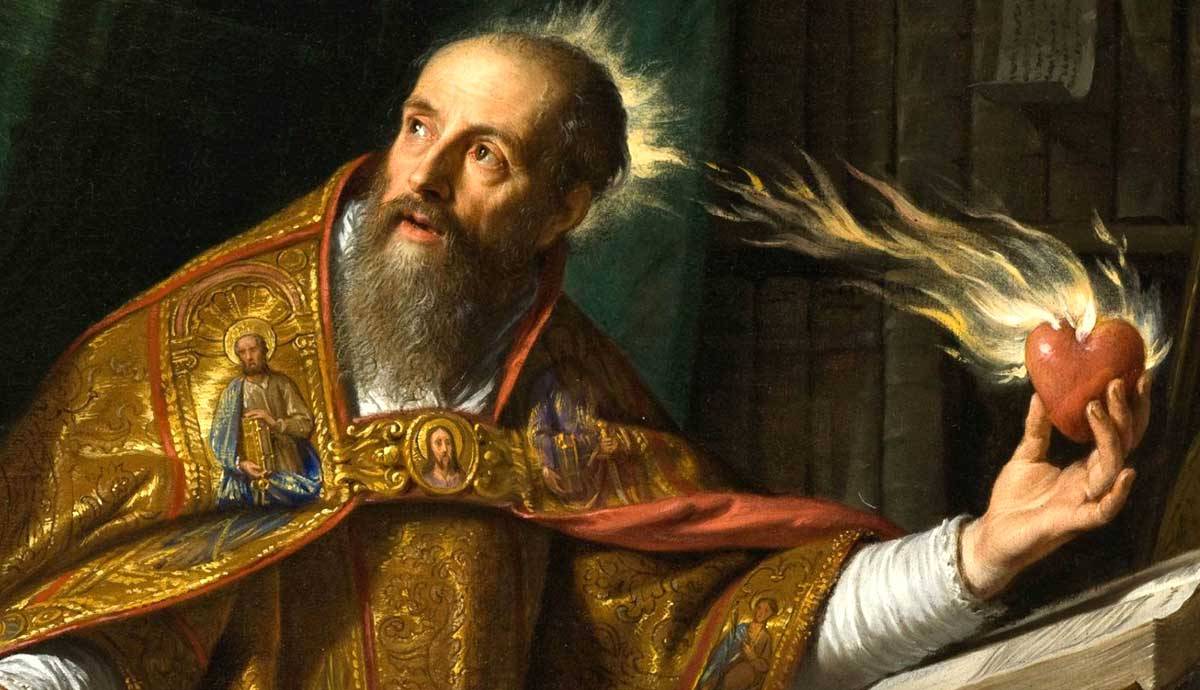 When we refer to nouns such as ‘bread’ or ‘flower’ we know exactly what they are. These are concrete objects that we can see, touch, taste and smell. But time is an abstract concept, and one that philosophers have long struggled to define. In the 3rd century AD, St Augustine of Hippo (354 AD – 430 AD) made a series of observations about time that went on to influence countless philosophers right into the 19th century. Many of his thoughts on time still ring true with people today. In this article, we take a look at St Augustine and his fascinating theories on time and consciousness, over 1600 years after they were first published.

A Brief Biography of St Augustine of Hippo

But first, it’s important to remember that St Augustine isn’t just celebrated for his theories on time (the ‘Saint’ before his name is a big clue!). In fact, he is widely considered to be one of the most significant Christian thinkers in history, thanks to his extensive theological writing.

He was born in 354 AD in Tagaste, a Roman community located in modern-day Algeria, just 40 miles from the African coastline. During this time, Christianity was beginning to spread from its major following in the Middle East. However, during Augustine’s childhood it hadn’t yet become the official religion of the Roman Empire.

Augustine’s family was fairly well off and his parents ensured that he received an excellent education. He became a highly capable scholar who traveled around Africa and Italy pursuing his studies. But as he grew older, his life became more tumultuous. Somewhat bizarrely for a future saint of the Catholic Church, Augustine had a few relationships with concubines and even enjoyed a lengthy affair with a woman he didn’t end up marrying. This union resulted in the birth of an illegitimate son, Adeodatus, in 372 AD.

Eventually, after years of studying and toying with Christianity, Augustine saw the light and converted at the age of 31, in the year 386 – six years after Catholicism became the Roman Empire’s sole official religion. He spent the rest of his life preaching and writing out his thoughts on Christianity in several books, including The City of God (426 AD). Unlike other early Church fathers, St. Augustine’s five million written words(!) survived the ravages of time. He is most celebrated for his adaptation of classical Greek and Roman thought into Christian teaching, which cemented his influence as one of the Church’s most esteemed thinkers.

St Augustine’s  most famous work is probably the Confessions, in which he recounts his life story both before and after his conversion to Christianity. As well as autobiographical details, the Confessions contains commentary on various aspects of philosophy, including some striking thoughts on the nature of time. Although many Greek and Roman philosophers had already discussed time at length, St Augustine was one of the first people to point out how difficult it is for human beings to properly define time.

His famous enquiry into time begins by asking: “What then is time? Provided that no one asks me, I know. If I want to explain it to an inquirer, I do not know” (St Augustine, 2008). Even today, thousands of years after Augustine wrote these words, many of us will recognize this problem. We know how deeply embedded our lives are in time. Each day, the sun rises and then sets before nighttime comes around. We observe the tides coming in and out, the seasons changing, and even our own bodies aging over time.

All of these physical things appear to confirm that time is constantly ‘passing’. But when it comes down to it, we struggle to define time because we can’t actually see time itself. We can’t touch it or smell it or taste it, even though our entire experience of life is so closely embedded in time. As St. Augustine remarks, when we don’t have to define time, we know exactly what it is. But finding the words to describe time out loud is incredibly hard.

The Unreality of Past, Present and Future

Augustine suggests that this is because it’s only within our own minds that we perceive the presence of time. Rather than being an external, observable phenomenon, time exists within our own consciousness: “So it is in you, my mind, that I measure periods of time” (St. Augustine, 2008). Our consciousness is a powerful tool because it is able to differentiate between what has happened, is happening and will happen.

Indeed, for thousands of years and across many (but not all) cultures, humans have tended to split time up into past, present and future. It’s through these tenses that we often characterize time as ‘flowing’. Without these three states, nothing around us would exist in the way we know it does. Augustine writes: “If nothing passes away, there is no past time, and if nothing arrives, there is no future time, and if nothing existed there would be no present time” (St Augustine, 2008). Time moves constantly from past to future, and we know this because of the physical changes we constantly observe. We see new things appearing all the time that weren’t there before, like seeds sprouting or people walking past our window. Meanwhile other things become ‘past’ when they disappear from existence, like when a leaf falls from a tree and eventually crumbles into dust.

However, past, present and future pose some problems for Augustine. Why? Because none of them really exist! The past definitely doesn’t exist anymore, and the future hasn’t yet occurred. Instead, the past and the future only really exist within our minds. After all, we can remember happy times in our life or make plans for next weekend. The past is something remembered in our minds, while the future is anticipated in our imagination. So these two temporal states only really exist within our consciousness, because in the external physical world, events which have already occurred no longer exist, while future events have not yet come into being.

Meanwhile, Augustine argues that it’s truly impossible for human beings to grasp the present moment: “If we can think of some bit of time which cannot be divided into even the smallest instantaneous moments, that alone is what we can call ‘present’. And this time flies so quickly from future into past that it is an interval with no duration” (St Augustine, 2008). As soon as we say the word ‘now’, plenty of time has passed since our brain kicked everything in gear to say it and the final ‘w’ sound leaves our mouth. Aristotle once referred to the present as “a knife edge without thickness” whose only function is to connect past and future. This inability to be able to point at a moment in time and say that this ‘now’ is the present: this is an irresolvable problem for the human mind.

The irresolvable nature of these ideas harks back to St Augustine’s emphasis on how difficult it is for humans to explain out loud what time really is. And in general Augustine is happy to leave things that way. He never puts forward a definitive definition of time, preferring to highlight the many issues that arise from our consciousness of time. Another dilemma involves the difference between our mental ability to perceive time in all its tenses vs time’s external effects on the world around us.

Take the human body, for example. Time affects our bodies by giving us wrinkles on our skin, making us weaker and turning our hair gray. We can’t do anything to stop this process, but we are deeply conscious of it and may reflect on it at length. This is why Augustine also calls time distentio animi or an “extension of the mind” (St Augustine, 2008). The mind is able to stretch or extend away from the confines of the present moment and its physical effects on our body, to think consciously about how it will affect us in the future too (including all those worries about gray hair!).

The Human Understanding of Time vs. God’s Eternity

In the end, Augustine doesn’t provide us with a good answer as to what time really ‘is’. Instead he highlights the bizarre nature of time, which doesn’t seem to exist at all, and yet is nonetheless still deeply significant to human beings. However, as a Christian man his enquiries eventually lead him to wonder what time must be like in God’s plane of existence.

St Augustine argued that earthly time (which is part of God’s creation) must be very different to the nature of God’s existence. God is eternal, and eternity or ‘God’s time’ is something we humans will never be able to understand. Reflecting on the nature of eternity, Augustine asks: “Who will lay hold on the human heart to make it still, so that I can see how eternity, in which there is neither future nor past, stands still and dictates future and past times? Can my mind have the strength for this?” (St. Augustine, 2008)

Eternity is incomprehensible to human beings. While our time is characterized by a constant flowing through the three temporal divisions, eternity in the Confessions is described as one eternal present moment. He compares the “drops of time” that he perceives in everyday life (the ‘drops’ in question refer to a water clock, steadily counting time) to God’s eternity, in which “nothing is transient, but the whole is present” (St Augustine, 2008). In eternity, there is no such thing as transition from past to present to future. Eternity is simply one whole present moment.

St Augustine’s Lasting Influence on the Philosophy of Time

St Augustine’s exploration of time, consciousness and eternity has influenced countless philosophers throughout the ages. Thinkers from Thomas Aquinas to Ludwig Wittgenstein have engaged with St Augustine’s writing, and his observations still permeate academic texts on time today. Although he never truly ‘defines’ time, perhaps it’s this ambiguity which helpfully summarizes our everyday human experience. Time is something that we assume exists because we apparently see evidence of it all the time. But when we examine things a bit more closely, time seems to exist only in our own heads.