HomeAnswersWhat Was the Religion of Ancient Rome? 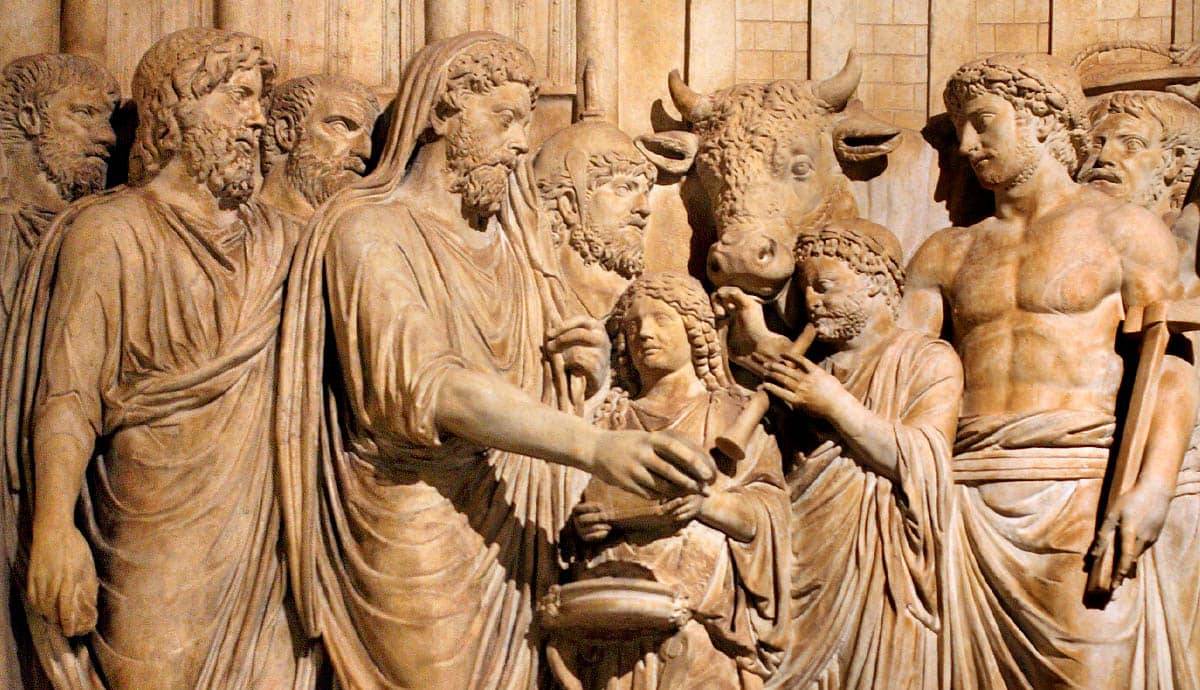 Religion is an important cornerstone to many societies, both ancient and modern. In ancient Rome, religion was the backbone to many of their most important beliefs. It informed not only the way they lived their lives but also the nature of their architecture and surroundings. From its earliest days, ancient Rome was polytheistic. This meant they believed in many gods and spirits, each with their own vital role to play. But the nature of Roman religion inevitably evolved throughout the centuries of the empire. Let’s delve into history to find out more.

From the outset, ancient Rome established a polytheistic system of beliefs, worshipping many different gods and spirits. They even thought some of these unseen entities were the spirits of their former ancestors. Romans also believed that the gods had helped to cement the very foundations of Rome. Because of this, they established a Capitoline Triad to celebrate the city’s three founding fathers. They were Jupiter, the god of all, along with Mars, the god of war and father to Romulus and Remus, and Quirinus (formerly Romulus), Rome’s first king.

Many of the gods prominent in ancient Rome were adapted from earlier Greek mythology. This was because there were many Greek colonies in Rome’s lower peninsula whose ideas filtered into Roman culture. In fact, most of the Roman gods had a Greek counterpart, often with a similar name or role. For example, Jupiter was the Roman equivalent of Zeus, while Minerva was the Roman version of the Greek Athena, the goddess of war.

Much like the ancient Greeks, different cities across ancient Rome developed their own patron saints, and huge, monolithic temples were erected in honor of these deities. Roman citizens saw these temples as the home of the god, and they would worship outside it or on the temple’s entrance. Later, as the Roman Empire grew, Romans also incorporated elements of their conquered nation’s belief systems into their own religious practices. That said, the overarching nature of Roman religion was remarkably similar to that of ancient Greece.

There were a few gods that the Romans invented themselves. These include Janus, the two-faced god who was the guardian of doorways and gates, who could look into both the past and the future at the same time. Another strand of religious thought exclusive to Rome was the Vestal Virgins, whose job was to guard the hearth of the Astrium Vesta. Chosen at the age of ten, these girls remained in service to the goddess Vesta for 30 years (a bit like today’s Christian nuns).

Beginning with Emperor Augustus, Roman leaders became the pontifex maximus, or chief priest, making them the head of any religious worship. Roman Emperors employed Roman augures, or soothsayers to read animal entrails in order to predict the future. Emperors also organized rituals and sacrifices to the gods at religious temples before going into any battle, in the hope of averting a negative outcome.

Both Judaism and Christianity eventually came to challenge religious belief in ancient Rome. Jewish ideas posed such a threat to ancient Rome that Jews often faced harsh prejudice and discrimination, leading to expulsion and even war; Emperor Titus led the Jewish wars that destroyed the city of Jerusalem and killed thousands. Christianity was initially seen as a small sect of Judaism, but it grew and grew, eventually taking over as the dominant religion across the Eastern and Western Roman Empires. In the east, Emperor Constantine was a great supporter of Christianity, and he even converted to the religion on his deathbed. This rising dominance of Christianity undoubtedly played a part in the downfall of the Western Roman Empire, and it would become the dominant religion for centuries to come.

The Pythia of Delphi: Ancient Greek Religion’s Most Powerful Woman