How Did Hydro-Engineering Help Build The Khmer Empire?

Khmer Empire (802-1431) once covered much of SouthEast Asia and its capital was the largest city in the pre-industrial world. The secret to their success was hydro-engineering. 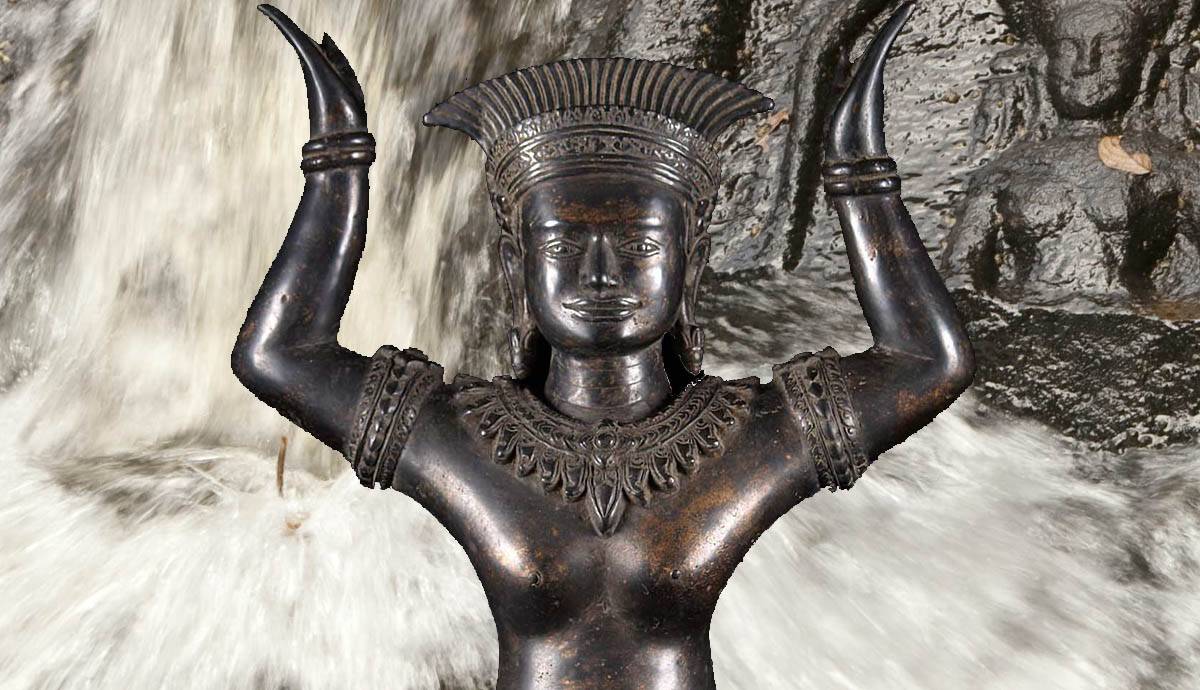 The Khmer Empire at its height was larger than its contemporary, the Byzantium Empire. Their vast capital city at Angkor had a population of around a million people.  At the same time, London and Paris had barely 30 thousand people with little built infrastructure to benefit their citizens.  A Khmer citizen had a food and water supply, sewage system, and transport network right at their doors.

This civilization thrived in an area that it waterlogged in the wet season and dry and dusty in the dry season due to their amazing hydro-engineering skills. They harnessed the monsoon and used it to their advantage.  The water management system was designed to collect and hold water throughout the year.

The Rise of the Khmer Empire

Jayavarman II was made King of the new Khmer Empire in a ceremony on Phnom Kulen in 802CE.   He united the two major kingdoms of Chenla and most of the smaller principalities that had existed previously.

Most of Cambodia is flat, but the Kulen Hills rise out of the plains north of the Tonle Sap. For a new King uniting the factious smaller states, the defensive advantages of the area are obvious. But Phnom Kulen provided more than just military advantages, it was also revered by the Khmer as sacred, and provided two resources the Khmer would manipulate to their advantage; rock and water.

Jayavarman II spent much of his reign subduing and consolidating his new Empire and he built his capital, Mahendraparvata, on Phnom Kulen. His successors were much more secure and moved the city from the hills onto the plain, just north of the floodplain of the Tonle Sap now known as Rolous.  Later the Capital moved again to Angkor as the hydro engineers became complete masters of the climate and landscape for hundreds of years.

Culture of the Khmer Empire

Ancient Cambodia was a mainly Hindu nation. It had been Indianized hundreds of years before the Khmer Empire existed. Therefore, Jayavarman II chose to have his coronation on Phnom Kulen to legitimize his reign.

It was then known as Phnom Mahendra, it was the representation of Mount Meru in Hindu cosmology. Jayavarman’s city name, Mahendraparvata means “Mountain of the Great Indra.” Mount Meru was where the Gods dwelt, somewhat similar to Mount Olympus for the Ancient Greeks. By being crowned there he became a Varman, not just a ruler, but also a deity, he was a God-King. His successors were also God-Kings, but converted to Buddhism and back again.

Cambodia’s climate shows that during the dry season there is little agricultural work required. Temple building not only kept the population busy but reinforced the idea that the King was also a God. For his people, this meant that working for the King was working for a God and storing up merit points for the next life.

The Khmer Empire had a culture of relative gender equality; there were female scholars and soldiers. Two of Jayavarman VII’s wives, Queen Indradevi and Queen Jayarajadevi were architects and lecturers at his university. Women, according to a Chinese diplomat, were the masters of the trade.  Thus, they harnessed the talents of the entire population, not just one gender. They supplemented this with the labor from a huge slave population; all but the poorest of families had slaves.

The Khmer Empire, like modern Cambodia, had a rice and fish-based diet. The Tonle Sap provided the vast proportion of protein in a range of marine animals and fish. Products from the lake including dried fish were exported to China by the Khmer Empire.

Rice was the staple crop and in rice cultivation, the Khmer Empire excelled. They could harvest three or four crops a year due to their mastery of water.  They planted deep water, medium water, and shallow water rice crops. The shallow water crop would grow and be harvested first, then medium and deep. This gave them fresh rice year-round and another surplus to export.

Then as now, the Khmer grew herbs and vegetables around their homes in anything that would hold a plant. But their water management ensured they could irrigate vegetable crops and fruit trees year-round.

The climate is tropical with two seasons due to the monsoon; the wet and the dry. As the country is ringed by mountains this restricts the amount of orographic rainfall reaching the area north of the Tonle Sap during the dry season. This results in a landscape that is waterlogged in the wet season and dry and dusty in the dry season. It can go months without any rainfall at all and resembles Australia in drought.

Much of central Cambodia still is a floodplain, the great Tonle Sap lake can increase up to 16 times in size during the wet season.  This huge accumulation of silt deposited yearly has left the countryside fertile, but in the dry season, the silt becomes dust as the ground dries out shrinks and cracks.  The Khmer built an enormous civilization on the ground that is mud in the wet season and hard as concrete in the dry.

The Kulen Hills rise out of this flat landscape and can be seen for miles around. They are sandstone and there is a large plateau on the top. The sandstone absorbs and holds the monsoon water and has eroded to give enough areas of deep fertile soil to support a large population.

The genius of the Khmer Empire was in their ability to build enormous structures such as Angkor Wat on the ground that swells and shrinks yearly.  They engineered the temples to float, supported by the water table which prevented them from sinking under their own weight.  Enormous reservoirs were built, rivers diverted and a canal system constructed; the entire landscape was altered.

The river which runs through Siem Reap is one of the major canal arteries connecting the capital city at Angkor with the Tonle Sap.  Now over 1000 years old, it has only slightly changed course south of the city attesting to the genius of the builders.

The river was just one of the massive networks of canals that were dug out throughout the area.  The canals were the transportation network that carried everything from people to the massive stones required to build the temples and monuments in the city of Angkor.  The canals were also a source of food, water, and waste disposal for the houses built along with them.

The bridges over the canals were built with tall narrow arches. These could be completely or partially blocked to control the rate of water passing through them. There were simultaneously a bridge, weir, lock, and dam wall.

The West Baray, the only remaining reservoir, is so large it can be seen from space.  At the time of the Khmer Empire, it was mirrored by an East Baray of the same size and at least another two smaller reservoirs in the local area. These huge man-made lakes collected the massive amount of water of the monsoon and helped prevent flooding. They provided water all year round to keep the canals operating and to irrigate crops and gardens.

Aerial Imaging of the Khmer Empire at Angkor

When you fly into Siem Reap at certain times of the year, you can see the grid pattern of the canals in the rice paddies. The rice grows greener over the former canals as the soil is deeper.

In fact, the extent of the Khmer Empire’s hydro network can only be appreciated from the air.  It was imaged from NASA which finally revealed the true extent of this massive landscape manipulation.

What was revealed was a landscape that was not natural at all, but had been intensively altered from the Kulen Hills to the Tonle Sap. It also had evidence of a network of highways reaching out to the wider Khmer Empire.

This needed to be examined in more detail and the first LiDAR scans for an archaeological landscape survey were carried out in 2013 and 2015.  They revealed a city on Phnom Kulen, Jayavarman II’s city Mahendraparvata which it’s estimated had a population of 80 thousand and another at Angkor of around a million.

The City at Angkor of the Khmer Empire

The sophisticated city at Angkor held hospitals and universities, it had contact and diplomatic relationships with China and the kingdoms around them. Delegates and traders from all over Asia could be found in the city of Angkor. This city surpassed anything in Europe at the time.

The Khmer Empire, masters of hydro-engineering, manipulated their landscape to harness the rhythm of the monsoon and were a major power in Asia for 500 years.  Their civilization rivaled the Romans in its engineering feats.

By Monique GallowayBA ArchaeologyI’m a former Australian soldier and historical archaeologist with a degree from the University of Sydney. After almost 20 years as a practicing archaeologist I now live in Cambodia and was running a social enterprise to help improve lives here. I have a special interest in the layers of history of a site and evidence of subversion, especially ancient graffiti on monuments.