HomeStoriesLiberia: The African Land of the Free American Slaves

European colonial expansion in Africa is a famous period of history. However, little is known about the US colony of Liberia, the new home of emancipated black slaves. 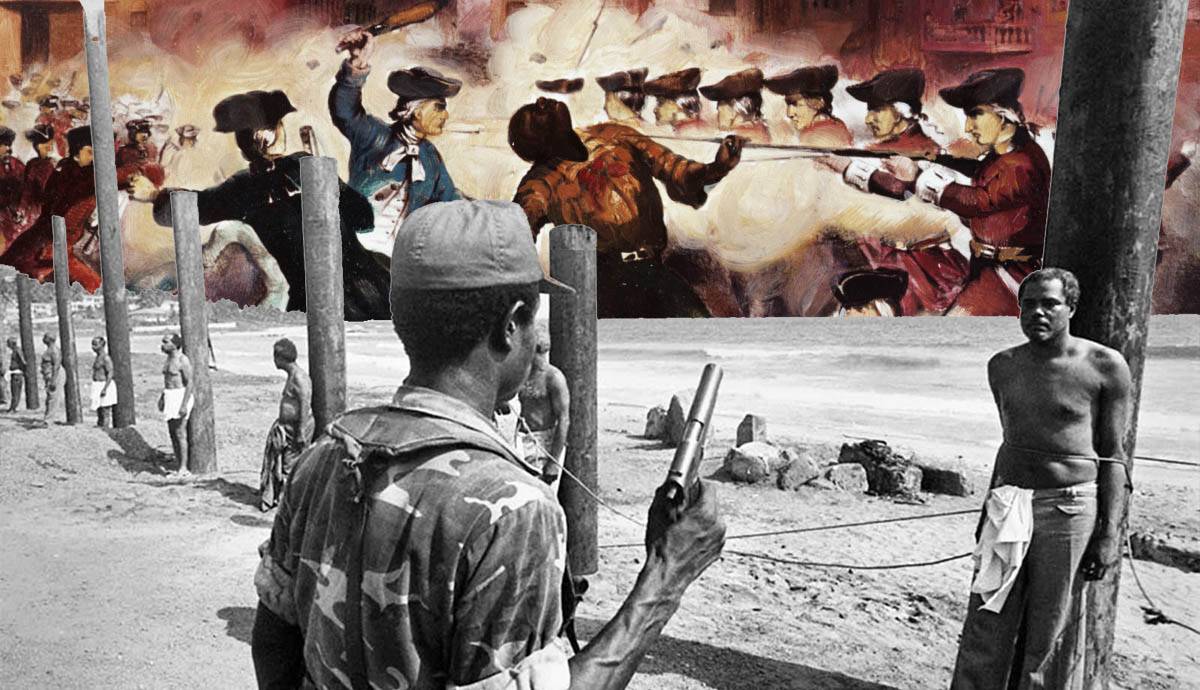 In opposition to European nations, American colonial expansion was not initiated for resources or strategic reasons. US colonialism in Africa is deeply rooted in the history of slavery.

Slavery was a major matter of division between US politicians. The divide would reach a breaking point with the election of Abraham Lincoln to the presidency in 1860, the breakaway of Southern States, and the Civil War that ensued.

American colonization of the African lands that gave birth to Liberia was presented as a solution for Black freedmen. However, the creation of a safe haven for Black American Citizens had unexpected results.

Justly, the relocation of Black Americans to Liberia had major destabilizing effects that are still experienced today in the daily lives of all Liberians.

Black Population in America Following the War of Independence: Before the Colonization of Liberia

On July 4th 1776, the thirteen British colonies in North America proclaimed their independence from Great Britain. A war that would last for six years ensued, ending with the victory of the pro-independence armies.  During the conflict, around 9,000 Black people joined the American cause, forming the Black Patriots. The latter were promised freedom from slavery and full citizen rights.

However, the newly-formed country went on to impose discriminatory laws on the Black populations. They were banned from military service, and some of them were even forced to return to the chains of slavery in the Southern States. Moreover, voting rights were granted only in five of the 13 States. The history of slavery in the United States would carry on for more decades to come.

In the years following the end of the American Revolutionary War, Northern States progressively abolished slavery. By 1810, nearly 75% of Black Americans in the North were free. In contrast, slave numbers grew in the South, reaching nearly four million by the mid-19th century.

The number of free Black Americans reached 300,000 by 1830. This increase worried slave owners. They were concerned that emancipated Blacks would support eventual revolts and riots in the South.

However, the situation of freedmen remained difficult. They could not establish themselves in American society, being victims of various forms of segregation.

The fear of free-Black-supported revolts and the need to offer tangible opportunities would lead to the creation of the American Colonization Society (ACS) in December 1816. The latter’s declared objective was the relocation of the Black population to their original land: Africa.

The American Colonization Society: An Important Episode in the History of Slavery in the USA

Throughout the history of slavery, the question of freed slaves was a major problem. Initially, relocating free Black people on the African continent was a British idea. In 1786, a number of Black Loyalists who fought alongside the British Army during the American Revolutionary War were sent to live in Sierra Leone. In 1815, Black American businessman and abolitionist Paul Cuffe followed up the British effort, personally organizing the relocation of 38 Black Americans in the African British Colony.

One year later, prominent abolitionists Charles Fenton Mercer and Henry Clay, alongside slave-owners John Rudolph of Roanoke and Bushrod Washington, established the American Colonization Society. For the abolitionists, the creation of the ACS was an opportunity to give Black people a safe haven away from segregation. For the slave-owners, it was a way to get free Blacks away from their plantations and block potential support for future slave rebellions.

In the 1820s and 1830s, the ACS gained the sympathy of former presidents Thomas Jefferson and James Madison. Additionally, the US president serving at the time, James Monroe, expressed his support of the Society. Step by step, the American Colonization Society gained popularity with abolitionists and slave-owners alike. Both groups supported the idea of “repatriation,” and looked to buy land on the African continent to resettle Black American populations there.

In 1821, American soldiers annexed Cape Montserrado and established the city of Monrovia. Jehudi Ashmum, the ACS colonial agent in Africa, managed to buy additional lands, formally establishing the colony of Liberia in 1822.

Black immigration to the newly founded colony started almost immediately. Under Black leaders such as Elijah Johnson and Lott Carry, the ACS started populating various towns. In the meantime, other smaller organizations such as Mississippi in Africa, Kentucky in Africa, and the Republic of Maryland also organized the migration of black groups to various towns of the colony.

The colonists quickly found themselves facing local adversity. Countless individuals fell ill with sicknesses such as Yellow Fever in the first days following their arrival. Additionally, local populations such as the Bassa heavily resisted the Black American expansion, brutally attacking US settlements. The fighting was intense, and casualties fell in thousands on both sides. By 1839, to avoid eradication, all American organizations operating in Liberia had to unite and form the “Commonwealth of Liberia” under the exclusive management of the ACS.

The idea of migration was not well received by the majority of Black Americans. They refused to leave their homes, preferring to fight for their emancipation in the United States rather than leave for a faraway land. After generations of slavery, many of them had lost any feeling of belonging to the African continent by that time. Additionally, the various difficulties encountered by the colonists made the prospects of immigration extremely unpopular.

As the United States was progressively confronted with more pressing matters, the colony of Liberia was left to fend for its own. As the US was fighting a bloody war against Mexico (1846-1848), the Commonwealth of Liberia, under the leadership of the American Colonization Society’s last colonial agent, Joseph Jenkins Roberts, declared its independence on July 26th, 1847. A few years later, the history of slavery would end in the United States of America, with the 13th amendment passed on January 31st, 1865.

Opposition to Colonialism Within the USA

The establishment of a colony in Africa was initially pushed as a cure to slavery and an alternative way for Black Americans to have their own home. Additionally, being strongly dominated by religious influences, the colonial movement in the United States presented itself as an illustration of Christian charity and a mission to spread Christianity in Africa.

Nonetheless, colonialism was firmly opposed by various parties. As we can learn from the history of slavery in the United States, Black Americans wanted to gain equal rights in their American homes instead of immigrating to a new promised land. Additionally, various Black Rights activists such as Martin Delany, who dreamed of a Black independent nation in North America, considered Liberia a “mockery” that hid a racist agenda.

Various pro-emancipation movements noticed that rather than curving slavery, the activities of the American Colonization Society had unexpectedly opposite effects. For instance, the 1830s saw a re-emergence of the Black Codes in various States such as Ohio and the expulsion of thousands of free Blacks from Southern States.

Other famous abolitionists opposed colonization, including the journalist William Lloyd Garrison, editor of The Liberator, a political journal known for its anti-slavery stance. He viewed the establishment of a colony for Black Americans to separate free Black Americans from their enslaved counterparts. To him, such a method was not addressing the issue of slavery but rather exacerbating it, as slaves were at risk of losing a major base of advocates for their right to freedom.

Gerrit Smith, philanthropist and future member of the House of Representatives, also criticized the Society. After being one of its key members, he abruptly quit the ACS in November 1835, as he considered colonization to have major perverse effects on Black populations in the United States.

The Independent State of Liberia

Following its independence, Liberia progressively gained international recognition from European nations such as Great Britain and France (in 1848 and 1852). However, the United States did not establish diplomatic ties with the newly-founded African country until 1862.

The Liberian Government pursued a policy of immigration of Black Americans. By 1870, more than 30,000 Blacks would immigrate to the new country. However, the influx of immigrants steadily diminished in the late 19th century, as the history of slavery reached its end in the United States. The Black Americans established in Liberia would define themselves as Americo-Liberians and implement rough colonial and imperial policies on the local populations.

Two parties dominated political life. The Liberian Party – later named the Republican Party- gathered its electorate from poorer categories of citizens. The True Whig Party (TWP) represented the richest classes and gathered huge amounts of funds. Due to segregationist laws against local populations, only the Americo-Liberians had the right to vote. Denied citizen rights, Liberians of non-American origin lived away from the coast, thus not benefiting from international trade. Some reports even suggest that Americo-Liberians engaged in irregular slave trade activities against indigenous populations.

In 1899, following the dissolution of the Republican party, the True Whig Party managed to establish hegemony over Liberia. The TWP ruled the country until 1980, maintaining social casts and segregation policies. By the 1940s, major social events progressively shook the Americo-Liberian rule. In 1979, a popular revolt opposing the increase of rice prices led to brutal repression, which created a rift between the regime and the army. In April 1980, a coup d’état led by Master Sergeant Samuel Doe led to the execution of the last TWP and Americo-Liberian president, William Tolbert, alongside all of his cabinet of ministers.

Nowadays, Liberia is a democratic country; however, the effects of Americo-Liberian rule are still experienced today. Following the coup d’état, two decades of civil war tore the country apart, seriously damaging its resources and infrastructure.

Removing Statues: Reckoning With Confederate And Other US Monuments

Removing Statues: Reckoning With Confederate And Other US Monuments