HomeAnswersWhat is the Meaning Behind Michelangelo’s Creation of Adam?

What is the Meaning Behind Michelangelo’s Creation of Adam? 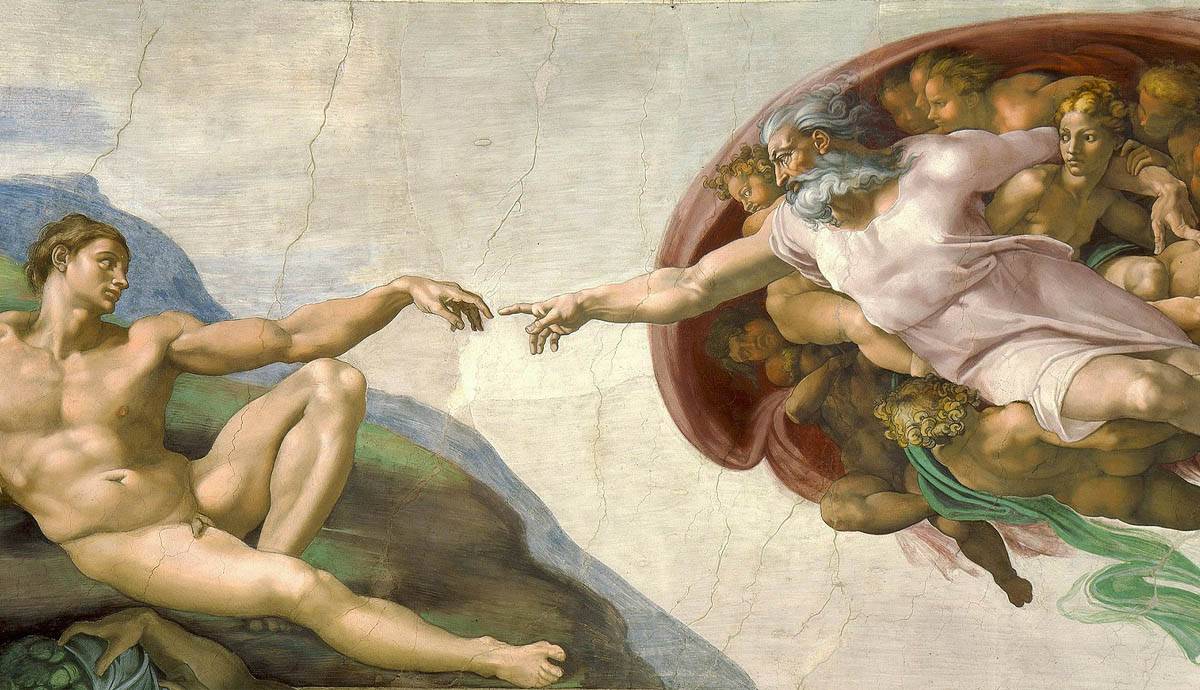 Michelangelo was one of the greatest artists of the Italian Renaissance, and his legacy lives on today. His greatest masterpiece was probably the interior of the Sistine Chapel, which he adorned with a stunning array of Biblical frescoes, an astonishing feat of artistic endeavor that took him over six years to complete, from 1508-1512. One of the most talked about frescoes within the Sistine Chapel is Michelangelo’s ‘Creation of Adam’, illustrating God reaching out and touching the finger of Adam to give him the gift of life. It is a complex scene with many layers of symbolism, prompting many to ask what the deeper meaning is behind this breath-taking work of art.

The most direct meaning in Michelangelo’s Creation of Adam is the moment when God created human life, as described in the Book of Genesis in the Christian Bible: “Then God said, “Let us make man in our image, after our likeness. And let them have dominion over the fish of the sea and over the birds of the heavens and over the livestock and over all the earth and over every creeping thing that creeps on the earth.” Michelangelo chose to illustrate this moment with complete clarity, painting God reaching out and touching Adam’s finger with his, to create the first great spark of life.

God is Giving Adam the Gift of Intellect

Many have looked into Michelangelo’s composition in more detail, and found possible suggestions for further hidden meanings. One argument made convincingly by MD Frank Lynn Meshberger is that the shape of the drapery and angels surrounding God resembles that of a human brain – amazing, right? Meshberger noted surprising correlations between Michelangelo’s design and the anatomy of a real brain, observing sulci in the inner and outer brain, the brain stem, basilar artery, pituitary gland and optic chasm – this astonishing level of accuracy reveals Michelangelo’s deep understanding of human anatomy, and his desire to imbue this into the meaning of his art.

Michelangelo Believes We Should Aim for Intellectual Pursuits

Even more astonishingly, Meshberger notes how God reaches out from the emotional side of the brain, the area which deals with creativity and intellect. Adam is already alive and fully conscious in Michelangelo’s painting, Meshberger argues, so it is not merely the gift of life that is being bestowed upon Adam in this moment, but something more – the gift of artistic and academic ability. Michelangelo believed deeply that his artistic talent was a God-given gift that he had been destined to share, and in some ways, perhaps, Michelangelo sees his own image in the body and mind of Adam here. Perhaps, too, he sees all of mankind, and the incredible awakening of human ability that was going on during the Renaissance, that led to such incredible moments of breakthrough. It is as if Michelangelo was instructing all people to strive for the highest level of achievement possible, because we had been given the divine gift of consciousness.

Adam is Being Born From a Womb

One more anatomical reference has also been made in relation to Michelangelo’s Creation of Adam, adding further possible layers of meaning to the painting. It has been suggested by many that the shape God and the angels create resembles that of a womb and placenta, suggesting Adam was given birth to, rather than being created by God in thin air. Some have even compared the circle of angels in the background to the surface of the placenta, and the line that unites God’s outstretched arm with that of Adam with an umbilical cord. This connection points towards a significant growing awareness of science and anatomical understanding during the Renaissance, though perhaps Michelangelo didn’t know to what extent they would come to eclipse Biblical ideologies.

Michelangelo Highlights the Importance of Women in Childbirth

Interestingly, it has been noted that God’s presence is far more dominant than Adam’s in Michelangelo’s scene, which is perhaps understandable, since he is portrayed as the creator of all life, and the entire universe here. But God’s arm also encircles that of a prominent female character, perhaps a mother counterpart to God’s father-like role. It is almost as if Michelangelo is telling us that he understands the importance of women in childbirth and creation. If this is true, it makes a fascinatingly complex argument for equality of the sexes within the Biblical story of creation, and the vital role of women within it.