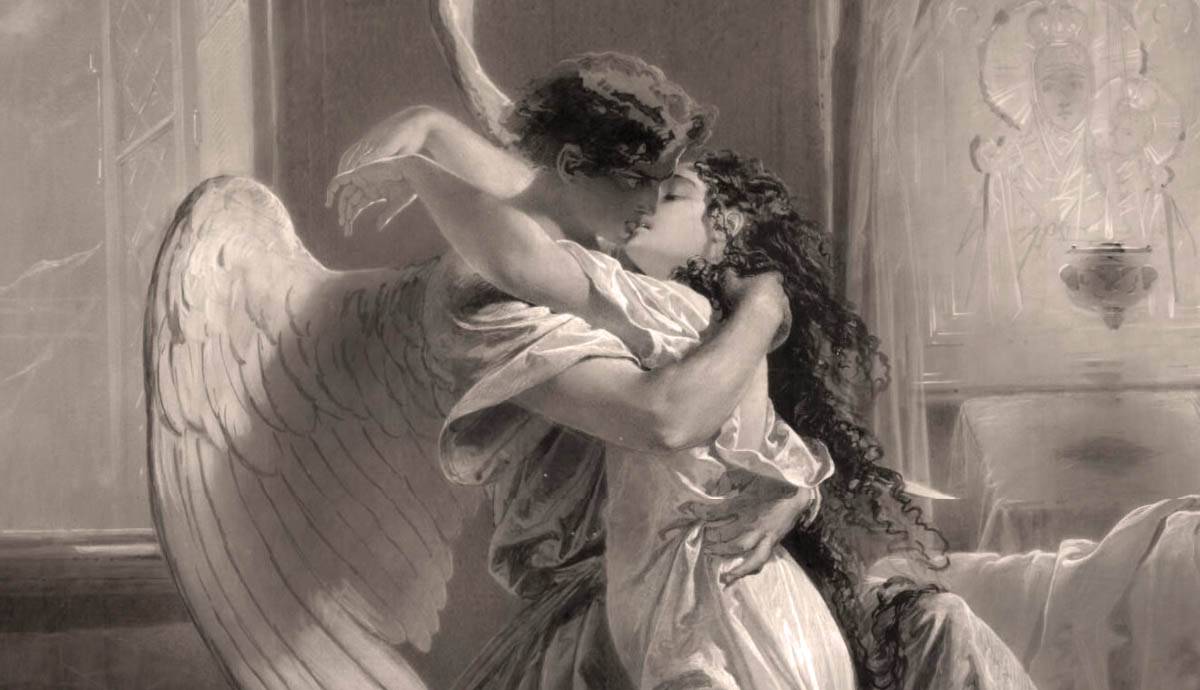 Mihály Zichy began his study of painting in Budapest but later moved to Vienna to pursue law. Alongside his law studies, he took private classes in painting at the Vienna Academy of Fine Arts. In 1844, he became a student of the reputable Viennese painter Ferdinand Georg Waldmüller.

When Waldmüller could not leave Vienna to become the teacher for the Grand Duchess Elena Pavlovna, he sent his best student instead. Zichy was just twenty years old when he moved to St. Petersburg in 1848. He took the job as an art teacher for the daughter of the Tsar’s younger brother but soon felt discontented in the position.

After leaving his post, he took a job with a photographer as a portraitist. He continued to live in St Petersburg for several years, receiving portrait commissions from Russian aristocrats and creating paintings for Tsar Alexander II’s coronation.

In 1858, Mihály Zichy became a member of the Russian Academy of Arts. The following year, he became the official court painter, serving under four different tsars. He painted many scenes of court and aristocratic life, including the Imperial hunt and caricatures. During his career as a Hungarian artist, Zichy also painted the portrait of the first Hungarian prime minister Lajos Batthyány and swore allegiance to Hungarian independence and freedom. He also produced paintings for Empress Elisabeth of Austria.

While living in St. Petersburg, he met the influential French writer, poet, and art critic Théophile Gautier, with whom he became good friends. Zichy’s early paintings had a strong influence on Gautier. In his 1867 book Voyage en Russie, Gautier devotes an entire chapter to Zichy, which helped boost his reputation as a Hungarian artist among the Russian public.

In 1874, Zichy traveled to Paris. He lived there until 1881 but returned periodically to his native Hungary. He later moved back to St. Petersburg, where he died in 1906. There is a museum named after Zichy, the Mihály Zichy Memorial House, which is part of the Hungarian National Gallery in Zala. The museum is actually in the mansion where Zichy was born and lived with his family.

“Whichever drawing of his we look at, we can discover the sign of a remarkably objective man with an acute eye and magical technique yet able to be an outside observer.”
‒ Aladár Bálint, Nyugat [West], issue 24, 1913

Zichy was, however, a well-respected artist whose scope encompassed a vast range of themes. Only a fraction of his work is controversial. Much of his work dealt with classic Romantic themes, such as courtly love, the sublime, revolution, independence, and the Orient. After all, he was a Hungarian artist of the late Romantic era.

Shota Rustaveli: The Knight In The Panther’s Skin

In 1881, Georgian intelligentsia commissioned Zichy to illustrate the Georgian Romantic epic poem The Knight in the Panther’s Skin. The poem comprises 1600 “Rustavelian Quatrains,” which consist of four 16-syllable lines with a caesura between syllables eight and nine.

Mihály Zichy completed thirty-five illustrations and was so moved by the poem that he gifted his work to the Georgian people and refused to take any payment. The poem itself was written in the twelfth century by Georgian national poet Shota Rustaveli. It is considered a canonical work of the Georgian Golden Age.

The central theme in the poem concerns equality between men and women, as well as friendship and courtly love. The story involves two heroes, Avtandil and Tariel, and their quest to find Nestan-Darejan, an allegorical embodiment of Queen Tamar, the queen who reigned in Georgia when Rustaveli had written the poem.

The literal translation of the title of the poem in Georgian is “one with a skin of vepkhi.” It isn’t clear if vepkhi refers to a panther, leopard, or tiger, and in some cases, it is translated as “a valiant man.” The narrative is made up of two quests, one in which Avtandil searches for Tariel (the knight in the panther’s skin), and the other in which he searches for Nestan-Darejan, who is Tariel’s love.

Rustaveli was considered to be a humanist writer. The poem glorifies the bond of brotherhood and friendship between the two heroes, as well as courtly love. Perhaps Zichy admired the poem because of its depiction of equality between the sexes since the poem also reflects an admiration for women and condemns forced marriages.

Imre Madách: The Tragedy Of Man

Mihály Zichy also illustrated the play The Tragedy of Man, written in 1861 by the Hungarian writer, poet, and aristocrat Imre Madách. The play is written as a dramatic poem of four thousand lines and is based on the story of Adam and Eve.

The play is considered to be a major work of Hungarian literature. The three central characters are Adam, Eve, and Lucifer. After their fall from Eden, Lucifer tempts Adam and Eve into sin and puts them to sleep before traveling with them through human history. Adam and Eve then assume various historical roles, from ancient Egypt to Greece and Rome.

Later, Lucifer transports Adam into the future, in which there is an ice age and civilization has almost entirely disappeared. In this bleak future, the sun is dying, and human civilization has been reduced to savagery. Just as Adam loses hope and resolves to throw himself off a cliff, Eve appears and announces that she is pregnant. The play supports Romantic love as Adam and Eve’s relationship endures throughout, despite the temptations of Lucifer.

Initially, Palissy had interests in ceramics and allegedly struggled for years to reproduce a style of Chinese porcelain that he had seen in France. Even after sixteen years of labor and reduced poverty, he did not manage to replicate the style.

Aside from his inventions and creations, Palissy made several important contributions to the natural sciences, including theories about the origins of fossils and the nature of underground springs.

It isn’t clear why Zichy chose to paint Palissy, whether because of personal interest or because he received a commission. Still, it is clear that Zichy’s scope as a Hungarian artist was quite vast. Whether his subjects were street vendors, aristocrats, lovers, mythological heroes, or historical figures, Mihály Zichy’s attention to detail and intensity of emotion exemplify him as an influential yet often overlooked Hungarian artist of the Romantic era.