The French painter Paul Cézanne broke with many artistic traditions. One of Cézanne’s achievements was his new way of depicting sensations. 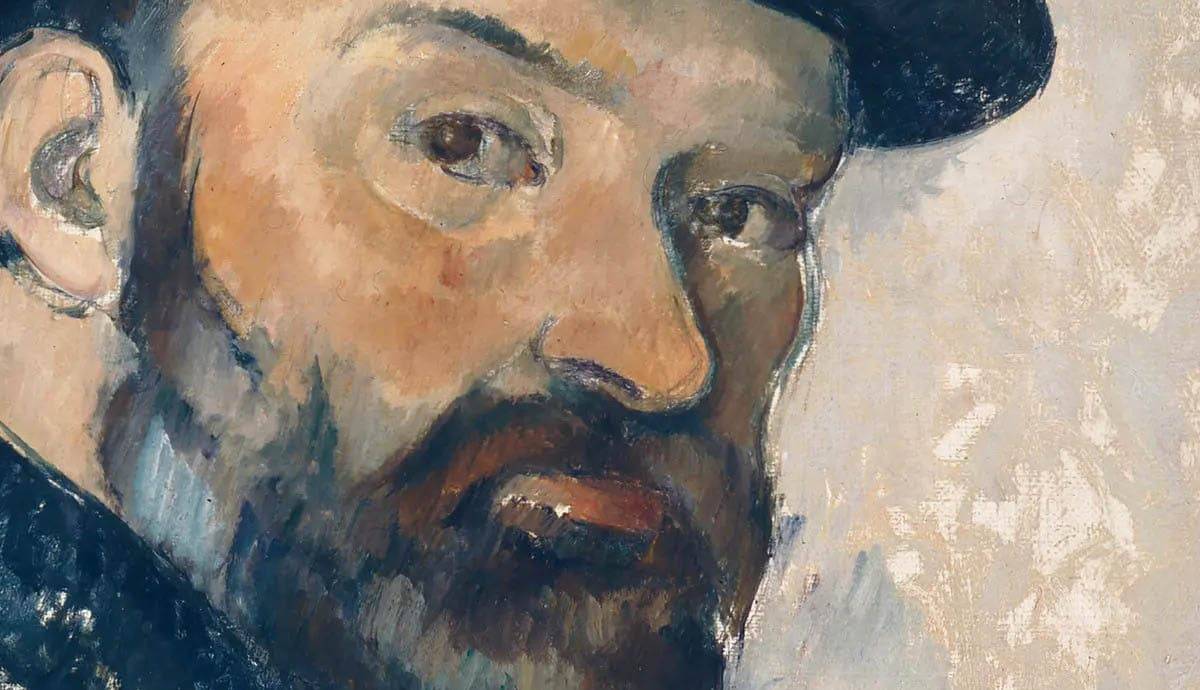 Paul Cézanne had an immense influence on modern art. Despite the fact that he painted conventional and well-known subjects such as fruits, still lifes, portraits, and landscapes, the French painter is known for his innovative style. Cézanne challenged how those subjects were traditionally depicted and emphasized his own sensations, visual experiences, and perception in his work. His subjective paintings can teach us a lot about the way we see and perceive the world around us.

Who is Paul Cézanne?

To better understand Paul Cézanne’s art, here is a quick summary of his life and work as an artist. The French painter was born in 1839 in the southern French commune and city Aix-en-Provence. Despite the fact that we know Paul Cézanne because of his important role as a Post-Impressionist artist, he originally studied at a law school according to his father’s wish. Cézanne eventually convinced his father to let him pursue an artistic career and he went to Paris to study art. He was associated with the artists who renounced the Neoclassical and Romantic tradition of painting and who consequently had to exhibit at the Salon des Refusés, which means the exhibition of rejects, since they were excluded from the annual exhibition of the Académie des Beaux-Arts. Cézanne was one of the painters exhibiting at the Salon des Refusés, along with artists such as Camille Pissarro and Èdouard Manet.

Even though Cézanne went through different periods and styles during his life, he is known for creating a connection between Impressionism of the late 19th century and Cubism of the early 20th century. Flat-looking planes and vibrant colors are characteristic of the works of the French painter. Pablo Picasso and Henri Matisse both viewed Paul Cézanne’s work as highly influential since they referred to Cézanne as the father of us all.

The French Painter’s Interest in Perception and Visual Experience

The examination of visual experience, perception, and how we look at things around us in Cézanne’s art can be partly attributed to his knowledge of stereoscopy and binocular vision. Stereoscopy concerns itself with the phenomenon of depth perception that occurs when we look at something with both eyes. This way, we usually know how far away certain objects are. The raw information that our eyes perceive is processed by our brain into one three-dimensional image. This three-dimensional image in our brain is achieved by viewing things with both the left and the right eye since this allows us to see the world from two slightly different angles. This creates a sense of depth when looking at an object and is also the reason why it is called binocular vision.

With the help of a stereoscope, it is possible to look at two-dimensional images, such as photos, and perceive three-dimensional depth, similar to watching a 3D movie. The images shown through a stereoscope are usually two photographs from slightly different angles mimicking the viewing process of our eyes and brain. Paul Cézanne was aware of stereoscopy and the visual theory of philosopher George Berkeley, which states that our sense of space is only constructed and expected by us through our habit of touching and looking at things and not what we really see.

According to him, our depth-perception is suggested by the eye but not actually visible to us. The impact of these phenomena of perception on the French painter’s work resulted in a kind of art that was different from historic ideals of perspective, such as the linear perspective arising during the Renaissance, while still providing the feeling of depth in his paintings.

In 1904, Cézanne wrote a letter to Émile Bernard saying: “The painter gives concrete expression to his sensations, his perceptions, by means of line and color.” Cézanne’s paintings are a testament to his exploration of the way we see and perceive the world. His brushstrokes, lines, and colors express this search for a more accurate depiction of perception and new artistic perspectives.

One of the most important texts discussing the connection of perception and Paul Cézanne`s work is called “Cézanne’s Doubt” and it was written by Maurice Merleau-Ponty. The French philosopher Maurice Merleau-Ponty is famous for his contribution to phenomenology, human experience, perception, and art. In his essay, Merleau-Ponty distinguishes the French painter from other artists such as the old masters and impressionists. According to him, Paul Cézanne was looking for a new kind of art that would highlight his raw sensations. The philosopher wrote: “It is clear from his conversations with Emile Bernard that Cezanne was always seeking to avoid the ready-made alternatives suggested to him: sensation versus judgment; the painter who sees against the painter who thinks; nature versus composition; primitivism as opposed to tradition.”

Merleau-Ponty further writes that Cézanne’s art does not depict photographic or geometric perspectives but shows a “lived perspective” and the ways in which we actually perceive the world. Cézanne portrays nature in a way that contains the sense of touch as well as vision and displays the raw information that the eye sees before the brain transforms it into something more scientific and geometric. The difference between our own “lived” vision and for example photographs becomes apparent when looking at photos where the architecture appears much smaller and the perspective way more restricted than in real life. By using a camera, we use a scientific tool to visually document the things around us, but the perspective of the camera does not necessarily align with how we actually perceive the world.

Merleau-Ponty also explains this idea by discussing the perspective of a table in Cézanne’s painting Portrait of Gustave Geffroy. He writes: “Gustave Geffroy’s table stretches into the bottom of the picture, and indeed, when our eye runs over a large surface, the images it successively receives are taken from different points of view, and the whole surface is warped.” This “warped” perspective captures the subjective perception of an individual before it is transformed into a view that reduces the human experience to mathematical formulas and geometrical perspectives.

According to Merleau-Ponty, Cézanne’s paintings show us “the depth, the smoothness, softness, the hardness of objects; Cezanne even claimed that we see the odor.” Whether you can see the odor or not, the shapes and light we view in our everyday life are less contoured and arranged according to a mathematical perspective than paintings or photographs demonstrate. Cézanne’s works tackle this issue and offer a more individualistic view.

The French Painter sometimes needed more than 100 hours to finish an artwork. Every brushstroke served a specific purpose. His fellow artist Emile Bernard said that each of Cézanne’s brushstrokes was supposed to represent light, air, or the object and its character, composition, and outline. This is why Cézanne sometimes took hours to paint even a single line.

The “Mont Sainte-Victoire” series offers a wide range of different depictions, even though the subject stays more or less the same. The Mont Sainte-Victoire is a mountain ridge near the city Cézanne grew up in. The artist created many works over a range of over 20 years showing Mont Sainte-Victoire from different locations, perspectives, and angles. He usually depicted the landscape from one of these three locations: the property of his brother-in-law west of Aix-en-Provence, the Tholonet Road, and Les Lauves.

Over the many years that Paul Cézanne depicted this subject, his style changed. While his earlier works started out as more figurative, he later depicted the same landscape by using more abstract shapes. In 1904, Cézanne illustrated this change in a letter to Emile Bernard by telling him to “deal with nature as cylinders, spheres, and cones.” This approach to simplifying the shapes of a painting by transforming them into spheres, cubes, or cylinders anticipates the style of Cubism.

Many areas of the Mont Sainte-Victoire paintings show unfinished spots that make the naked canvas underneath visible. These unfinished parts of the paintings, flat shapes, and lack of illusionism emphasize the two-dimensionality of the medium. This reminds the viewer that they are only looking at a painting that resembles what they see when they look at a mountain but is not actually their own view of a real landscape. Until then, paintings were supposed to mimic reality as closely as possible and hide their two-dimensional quality.

While Cézanne tried to portray his real and raw perceptions and sensations, his paintings also seem to be aware of the fact that they can be nothing more than just paintings.

Paul Cézanne created depth by portraying his subjective visual experience, sensations, and perceptions. The combination of this flatness and depth is a central quality of these works and it challenges the viewer to think about the complex relationship between illusionist images and how we actually perceive the world around us.

The Legacy of Paul Cézanne’s Art

Even during his lifetime, Paul Cézanne’s work was appreciated by other artists. Famous artists like Pierre-Auguste Renoir, Kasimir Malevich, Georges Rouault, Henri Matisse, Edgar Degas, Paul Gauguin, and Paul Klee recognized the genius of his work. He influenced many painters and artists such as Albert Gleizes and Jean Metzinger. Since Cézanne’s innovative approach had an immense impact on Cubism and modern art in general, he is often called the father of modern art; or as Picasso and Braque referred to him: the father of us all.

17 Famous French Painters From The 17th Century You Must Know