HomePhilosophyThe Founding Problems of the Philosophy of Mathematics

The Founding Problems of the Philosophy of Mathematics

Mathematics and philosophy are disciplines with a great deal of shared history and common intellectual ground. But what are the main problems of the philosophy of mathematics? 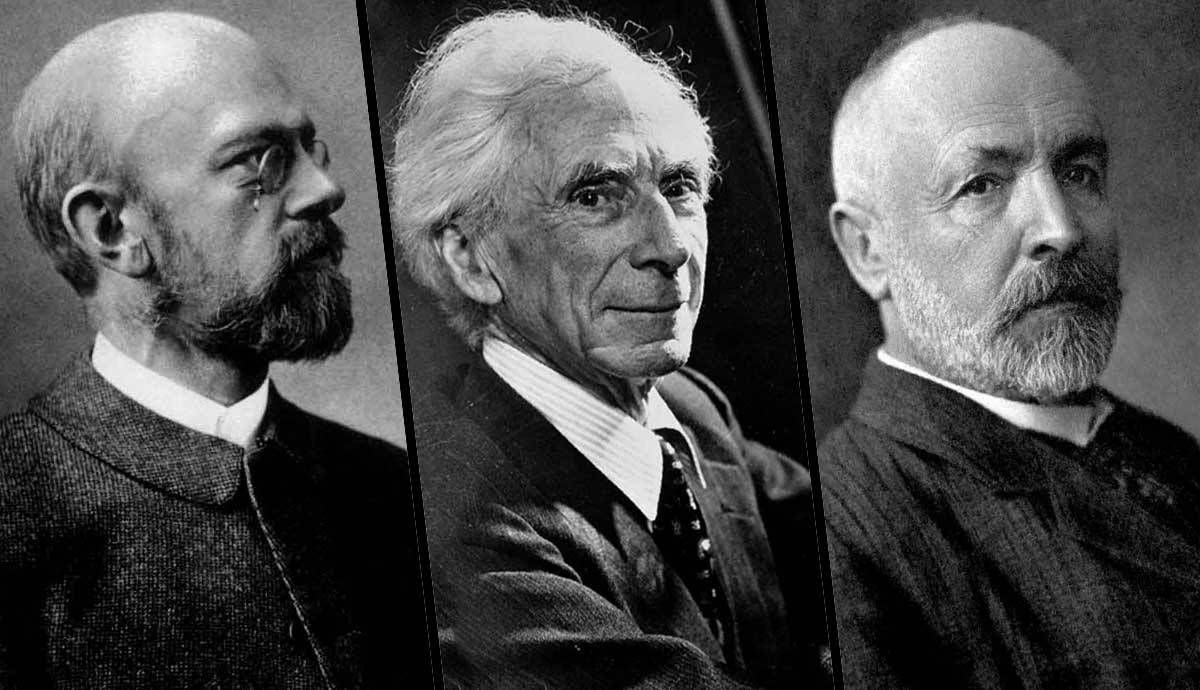 The Philosophy of Mathematics: From the Simplest to the Most Complex of Questions

Both mathematics and philosophy have changed an awful lot in not very long at all. Old concerns still guide inquiry: philosophers of mathematics need to determine what kind of existence is granted to objects like ‘1’ and ‘circle’, and what kind of truth to statements like ‘1+1 = 2’. But modern mathematics asks philosophers new and disturbing questions, and points to objects whose nature is even harder to pin down. These questions have conjured such varied and seemingly incompatible answers that the philosophy of mathematics can seem like a strange sport in which one picks a side and defends it religiously against all the others. It is important to note that there are so many “sides” that it would be impossible to hope to cover them all in such a brief introduction as the one you are currently reading.

David Hilbert: A Great Project in (the Philosophy of) Mathematics

Let us take a look at a historical arc that touches upon many key issues in the philosophy of mathematics, a microcosm of the interplay between pure philosophy and pure mathematics: the project of the mathematician David Hilbert, and in particular his dispute with another influential thinker, L.E.J. Brouwer. As pure mathematics matured in the 19th Century and happened upon increasingly abstract and unintuitive notions, mathematicians and philosophers alike saw clearly the need to seriously examine the foundations of the subject. Among them was Hilbert, a central player in the drive to lay out the groundwork for a logical and robust subject in practical terms. He hoped to translate the view that mathematics is a perfect, rational science, shared by so many philosophers, into something concrete.

Hilbert’s thought was motivated by what were in his time profoundly modern developments in mathematics. In particular, he wanted to give a permanent home in mathematics to the transfinite. The work of Bolzano and Cantor in set theory (a set being naively just a collection of things organized under a label) dealt seriously and rigorously with the idea of actual infinity; that is, infinite objects being granted an existence of their own. For instance, the set of all integers {1, 2, …} as an object in its own right is an actual infinite; on the other hand, in dealing merely with arbitrarily large numbers, one needs only the notion of the potential infinite, which had been in the ontological toolbox of mathematicians for centuries. Philosophers from every age had drawn this distinction – the notion of the actual infinite itself was not new. Nonetheless, Cantor drew out its implications in set theory for the first time. The key was a simple way of rethinking the notion of number.

Our everyday idea of the size of a set reduces to simple counting: given two collections of things, we can tell whether or not they are the same size by counting the things in each collection and compare the answers – I have three apples, you have three bananas. Cantor drilled into the notion of “being the same size as” and abstracted the notion of one-to-one correspondence: sets are the same size as one another if one can pair off their elements – if to each of your bananas I can assign precisely one of my apples. But, with this simple abstraction we get, for free, a way to talk about the ‘size’ of infinite sets: we can call two infinite collections the same size if we can put them in such a one-to-one correspondence. As it turns out, there are infinite sets that cannot be related one-to-one in this way. There happen, for instance, to be ‘more’ real numbers (that is, all of the number line – infinite decimals and all) than whole numbers, despite both collections being infinite.

It gets weirder – Cantor’s Theorem tells us, in essence, that there are a lot of different infinites: infinitely many, in fact, and given any infinite collection, there is always a bigger one. This new way of dealing with the concept of number led to the study of cardinals, which are in a sense a radical extension of counting that enables us to speak about all manner of actual infinities.

These strange phenomena lead to many leading mathematicians pushing back forcefully against this new actual infinite, such as Henri Poincaré, who declared that ‘There is no actual infinity, the Cantorians have forgotten that, and they have fallen into contradiction’. Cantor’s ideas, though now near ubiquitous in mathematics, were not initially popular at all.

But to some – Hilbert among them – this break from the finite was a great victory for the free development of mathematics. For Hilbert, the mathematical soundness of Cantor’s infinite was a matter of great aesthetic importance, as can be grasped from his notorious quote: “From the paradise, that Cantor created for us, no-one shall be able to expel us”.

Differences in perspectives in philosophy of mathematics can be in part calibrated by attitudes towards these new infinities. Hilbert’s view put him squarely in opposition to another prominent thinker, L. E. J. Brouwer, leading to an infamous philosophical rivalry.

Hilbert saw mathematics as a sort of game, dealing purely in the manipulation of symbols according to certain rules, a view known as formalism. This view does not necessarily forbid interpretations of this ‘formula game’ as in-this-or-that-way connected to reality, but, in its basic form, it requires rather less commitment to problematic mathematical ‘entities’ than older forms of mathematical realism, such as platonism (the view dating, naturally, back to Plato, which holds that mathematical objects like ‘1’ and ‘circle’ really exist as persisting objects in a way that is independent of us and our understanding of them). Brouwer understood mathematics in a third way radically different from both of these perspectives.

One of Hilbert’s better-known theorems, and the kernel of a point of profound disagreement between him and Brouwer, is his so-called Basis Theorem. The finer details are irrelevant: what was interesting to philosophers, and objectionable to Brouwer, was the way in which Hilbert proved it. Hilbert’s Basis Theorem is an existence theorem – it takes the form ‘there is at least one X’. Mathematicians, when tasked with showing that ‘there is at least one X’, can take one of two approaches: they must either show how to find such an X, or show that it is impossible that there is no such X. Proofs of the first kind are called constructive, and proofs of the second kind are called non-constructive. Hilbert’s proof of the Basis Theorem was non-constructive. Brouwer took issue: he founded and passionately defended an approach to mathematical philosophy known as intuitionism.

The intuitionist refuses to consider mathematical objects as things that were not constructed by the activity of the mind. To Brouwer, non-constructive proof techniques of the kind used by Hilbert were seriously problematic. The broader school of mathematical philosophy that rejects these non-constructive proofs is known as constructivism. Constructivists frequently reject the existence of the actual infinite in mathematics, which as an independent view is known as finitism (along with its rather fringe cousin, ultrafinitism, which rejects even finite objects that are ‘too large to reasonably construct’). Hilbert and Brouwer thus offered not only different perspectives on the reality and validity of mathematical objects, but radically different ways of doing mathematics.

Both spawned new study in mathematical logic itself: intuitionist logic studies logical systems without the law of the excluded middle and is to this day an active field of research. More notoriously, however, the early formalist approach of Hilbert had as an optimistic goal the creation of an axiomatic system (axioms being initial statements always assumed true) from which all mathematics could be derived, and which was itself free of contradictions. These notions – respectively called completeness and consistency in mathematical logic – both seemed to be perfectly sensible things to ask of your chosen mathematical foundations.

In 1900, Hilbert published a list of 23 problems he deemed to be at the cutting edge of then-contemporary mathematics. Second on the list was to show that his axioms of arithmetic were consistent. This system of axioms offered the usual basic arithmetic structures we are familiar with – numbers, addition, subtraction, etc. – and, it was hoped, were also powerful enough to formalize the rest of mathematics.

The now-infamous two incompleteness theorems of Kurt Gödel put to rest the more starry-eyed interpretations of Hilbert’s project by showing that no system of axioms containing arithmetic can prove its own consistency. They are precise and subtle logical theorems and philosophers have been cautious in considering their consequences for mathematical realism (Gödel himself was still a committed Platonist).

Though Hilbert’s program was not necessarily at a complete standstill after Gödel, the theorems were a watershed moment for mathematical logic – and have been the subject of unending philosophical discussion ever since. Hilbert’s approach was neither the first nor the last word on axiomatic foundations of mathematics. Many grand projects existed.

Frege, and later Russell, led the logicist approach, which aimed to reduce mathematical theorems to propositions of logic. Russell famously found a serious issue in Frege’s approach – one of his axioms, which was to allow the creation of a set by invoking the set of all things satisfying a given property, fell afoul of a contradiction, now known as Russell’s Paradox: that the set of all sets not containing themselves, a nonsense entity, is allowed by this law. In turn, Gödel’s theorems seemed to put the brakes on Russell’s own logicist ambitions, and mathematicians turned to less ambitious approaches. Frege and Russell were both themselves integral to the early development of Ludwig Wittgenstein, whose work has a wide range of further implications for the philosophy of mathematics, including the status of logic and their relationship with natural language.

Old Questions, New Questions: The Future of the Philosophy of Mathematics

Eventually, a working solution to the problem of the axiomatization of set theory was found in the form of the Zermelo-Fraenkel axioms (together with the axiom of choice, historically controversial if less so today) … In practical terms this ontology – which contains only one object, a set, out of which everything is constructed – is the ‘default’ for mathematicians nowadays (though by no means the only choice).

Zermelo-Fraenkel set theory lies all the way along the path from philosophical speculation to concrete mathematical knowledge – it is now itself a mathematical object studied by logicians. But just as Cantor’s notion of set challenged the way philosophers think about mathematics, so newer abstractions are beginning to do the same, as new foundational approaches come and go. Not only are old questions still fresh, but fresh questions emerge from new ideas in mathematics, never failing to keep philosophers busy, as the interplay between philosophy and mathematics deepens.

What Does “I Think, Therefore I Am” Really Mean?
By Rachel Ashcroft, in Philosophy
7 Facts About John Rawls’s Theory of Justice You Should Know
By Luke Dunne, in Philosophy

A Proponent of Logicism: Who is Gottlob Frege?